From the California Department of Public Health: http://stillblowingsmoke.org/#health

E-cigarettes: “Don’t let the genie out of the bottle”

It was no surprise that e-cigarettes were high on the agenda at the recent Oceania Tobacco Control Conference in Perth – nor for those in this research space that #OTCC15 Twitter action generated significant and often aggressive interest from ‘pro-vapers’. 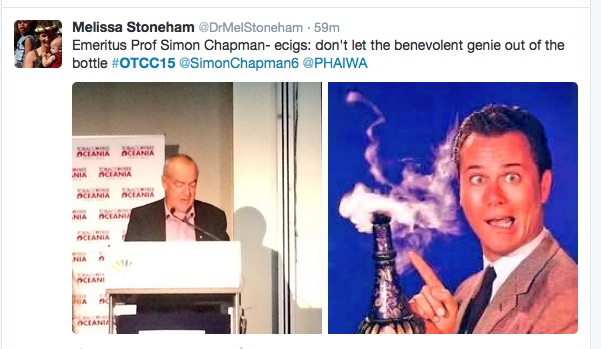 Chapman warned Australia should “think very carefully” before allowing the sale of e-cigarettes containing nicotine while debate continues over whether they represent a breakthrough in cutting back cigarette smoking or a new vehicle to addict consumers to nicotine.

“That genie is well out of the bottle in England and the United States, and other countries need to watch what is happening there very closely,” he said.

As this backgrounder from the Royal Australian College of GPs (RACGP) outlines, Australian laws covering electronic cigarettes (e-cigarettes) are complex and varied, but essentially:

Chapman’s warning was echoed by others.

In paying tribute to the late Dr Nigel Gray, one of the leaders of tobacco control globally as well as in Australia, Professor David Hill warned that e-cigarettes may be the next flawed pursuit of “that illusory safe (or at least less dangerous) cigarette” as had been the development of low tar cigarettes in decades past.

“Who would have thought 15 years ago that we would be faced with the wicked challenge of e-cigarettes at this point in this journey,” she said in her keynote address.

US economist Professor Frank Chaloupka, an international expert on the economics of tobacco control, is less concerned, saying while there is much debate over just how much less risky, he had no doubt that e-cigs are less harmful than combustible products.

But he said Australia should only consider a highly regulated market, unlike the US where they are “virtually unregulated at this point”, which has left policy-makers trying to catch up, particularly around high numbers of young people who have taken them up. He said:

That’s a consequence of the fact that there haven’t been many restrictions in past on how old you have to be to buy them, no restrictions on marketing at this point, they’re not being taxed almost anywhere, they’re widely available, aggressively marketed, kids are starting to take them up….That’s a problem, you wouldn’t want to do that in Australia.

Australian regulators may have to move very quickly, judging from a presentation by Quit Victoria’s Jacqui Bell at the conference.

She looked at two e-cigarette advertisements, which aired on prime-time TV and raised concerns about the extent to which current advertising laws and standards are preventing promotions that “potentially renormalise and glamorise smoking behaviour.”

See what you think in this Croakey interview below.

And, as shown by the many vapers who joined the Twitter conversation at #OTCC15, it’s not just mainstream media that is a platform for the promotion of e-cigarettes.

Frank Chaloupka pointed to research being done by his colleagues from the University of Illinois in Chicago that is looking at the promotion of e-cigs on Twitter in particular, and what regulations do (or don’t) apply.

Their studies, published in a special supplement in the July 2014 issue of Tobacco Control explored, among other questions, whether e-cig friendly tweets are coming from spammers, marketers, bots or enthusiastic users.

Among 70,000 e-cig related tweets tracked over two months, they found nearly 90 percent were commercial tweets and only 10 percent were ‘organic,’ or individual consumer opinions.  A significant portion referred to smoking cessation and price promotions.

These results have direct and important implications for future (Food & Drug Administration) FDA regulations on e-cigarettes and related products, particularly with respect to marketing restrictions on social media. To the extent that e-cigarette safety and efficacy have not yet been fully studied, extensive marketing of the products on social media may carry public health risks. 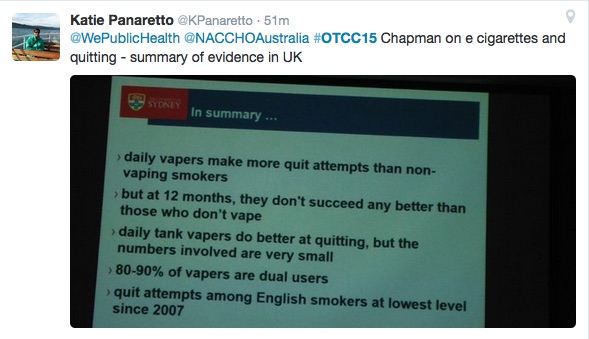 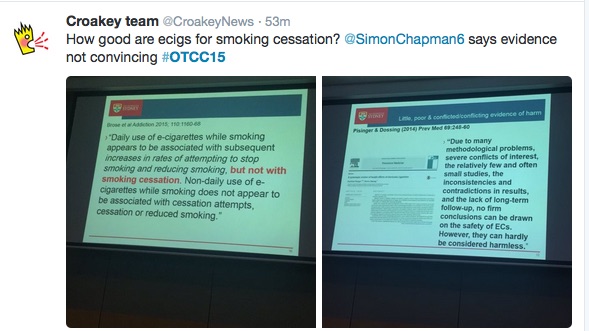 At long last, we have a National Preventive Health Strategy. What next?