"Getting the band back together." Professors Simon Chapman, Emily Banks and Mike Daube, together with Nicola Roxon, Minister Mark Butler and Professor Melanie Wakefield. Photo by Trish Kirby

Health leaders have warmly welcomed Federal Government plans for sweeping tobacco control reforms aimed at ensuring that no more than five percent of Australians are daily smokers by 2030.

Health and Aged Care Minister Mark Butler yesterday announced plans to streamline tobacco control measures into a single Act of Parliament, with a raft of new measures, including:

Butler said tobacco companies would also be required to be open and transparent about their sales volumes and pricing, product ingredients and their emissions, along with their advertising, promotion and sponsorship activities.

The reforms would re-establish “our reputation as a global leader in tobacco control”, he said, and “provide a new world leading framework to improve the health of the community by reducing tobacco use, and its associated health, social, environmental and economic costs and the inequalities that it causes and perpetuates”.

Butler said Australia’s current tobacco-related measures are split across as many as eight different laws, regulations, instruments and court decisions, while legislation prohibiting certain forms of tobacco advertising is now 30 years old. Smokers were falling through the gaps in “this convoluted patchwork of regulations”, he said.

The reforms aim to achieve a national daily smoking prevalence of less than 10 percent by 2025, and five percent or less by 2030.

The Minister also announced the Therapeutic Goods Administration (TGA) would lead a public consultation on the current regulatory framework for nicotine vaping products and that he would meet with state and territory health ministers in January to ensure a coordinated response.

The TGA said in a statement the potential reforms are aimed at preventing children and adolescents from accessing nicotine vaping products, while supporting access to products of known composition and quality for smoking cessation with a doctor’s prescription.

Evidence is emerging, the TGA said, that more could be done to ensure that the reforms that commenced on 1 October 2021, which classified nicotine vaping products as prescription medicines, are meeting these aims.

Children are continuing to access nicotine vaping products in higher numbers, and many adults are accessing them on the black market, rather than lawfully with a prescription from an Australian registered doctor.

The TGA has released a consultation paper and is seeking public comment by 16 January via the TGA Consultation Hub on potential reforms in four areas:

“The fight against Big Tobacco is far from over and today’s measures will make a real difference. Introducing plain packaging was a strong step forward and these new reforms, such as health promotion inserts, are most welcome,” she said in a statement

“One of the main concerns held by the college is the appeal of e-cigarettes to young people and the potential for vaping to become a life-long nicotine habit. Read my lips, vaping is not a risk-free, harmless version of smoking cigarettes. E-cigarettes are addictive and harmful products that can even prove fatal if ingested in certain amounts, something many young people are not aware of.

“Looking ahead and building on today’s announcement, we urge the Government to heed our submission to the Government’s draft National Tobacco Strategy 2022-2030 and introduce more clearly documented restrictions on tobacco lobbying to encompass all nicotine containing products. We also urge all political parties to reject Big Tobacco donations and refrain from meetings with any tobacco lobbyists because put simply they don’t deserve to get their foot in the door.”

The Australian Medical Association also welcomed the announcements, saying the failure of previous governments to address lax laws had been a lost public health opportunity.

“The failure to address lax laws curbing the tobacco and vaping industry over the last decade was a lost opportunity in public health policy, which has created the next generation of young people addicted to nicotine,” Professor Steve Robson said in a statement.

“The tobacco industry must not influence public health policy. It is heavily invested in e-cigarettes and has tried to hold back e-cigarette regulations. We need to see strong reform in this area, including a ban on personally importing these products into Australia, and removing aspects that make these products so attractive to kids, such as flavours and appealing packaging.”

The AMA said it looks forward to the release of the National Tobacco Strategy 2022–2030. 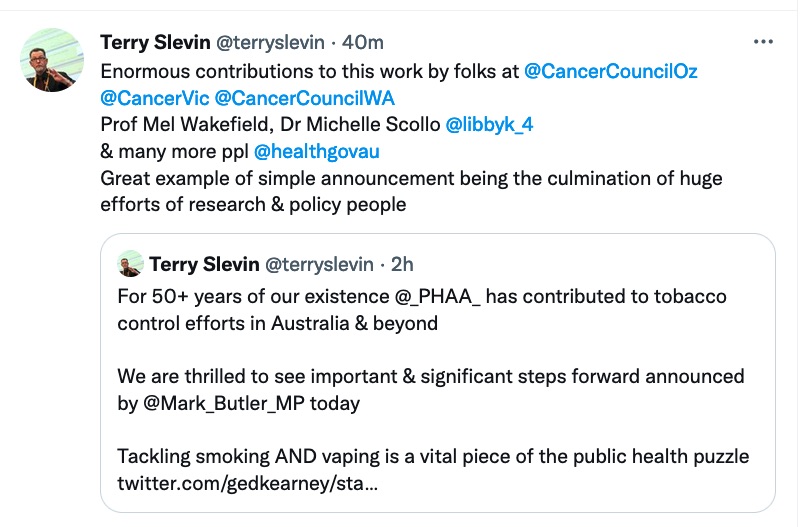 Butler announced the reform plans at an event at Parliament House on 30 November marking the 10-year anniversary of plain packaging reforms driven by his former boss, Nicola Roxon, when Butler was the junior health minister.

Welcoming Roxon to the event, Butler said he thought it was taking place in the same room where she launched the plain packaging laws.

Working for Roxon as her junior minister “was one of the absolute highlights of my professional life”, Butler said. “I can’t imagine a smarter, more generous person to work with as a leader.”

He joked that the gathering looked like “Nicola getting the band back together” as so many leaders in tobacco control were there, including Professor Tom Calma, Professor Simon Chapman, Professor Mike Daube and Professor Melanie Wakefield.

“Tobacco plain packaging was bold policy achieved in the face of some often savage legal and rhetorical assault, but it was imaginative policy. And it was world-leading policy. We know that because 26 countries since then have followed Australia’s example. And it’s a policy that has saved lives and will continue to save lives,” he said.

“Ten years ago, when Nicola launched this reform, around 16 percent of Australians smoked, and today that rate is down to just under 11 percent. A five percent drop in smoking rates is equivalent to one million fewer Australians smoking. The health impacts of that are just enormous.

“Tens of thousands of families that might never struggle through the tragedy of lung cancer, and the vast range of other diseases caused by tobacco smoking. Countless lives saved. And yet powerful forces lined up to block this life saving reform.

“The tobacco industry had deep pockets and powerful friends. The then opposition leader Tony Abbott, himself a former Health Minister who should have known better, would often denigrate these reforms by saying they weren’t health policy, but tax policy. In 2009, the same year that the Coalition raked in nearly $300,000 in donations from Big Tobacco. The Shadow Health Minister Peter Dutton said that these world leading lifesaving reforms were in his words, ‘a bridge too far’.”

Butler paid tribute to Dr Mal Washer, a GP and former Liberal MP, who played a pivotal role in ensuring the legislation passed the Parliament.

He said the stalling of tobacco control efforts over the past decade had hit the poorest and the most marginalised Australians hardest.

The Minister also highlighted the importance of the tobacco reforms for First Nations communities, noting that 23 percent of the gap in health outcomes is driven by smoking, which “is the most significant modifiable risk factor in the Closing the Gap Initiative”.

He said the former Government had been “asleep at the wheel as vaping rates skyrocketed”.

“The former Health Minister, to his credit, wanted to take action on vaping but was rolled within only a couple of days in his party room. And our children are paying the price today for that division and that delay.” 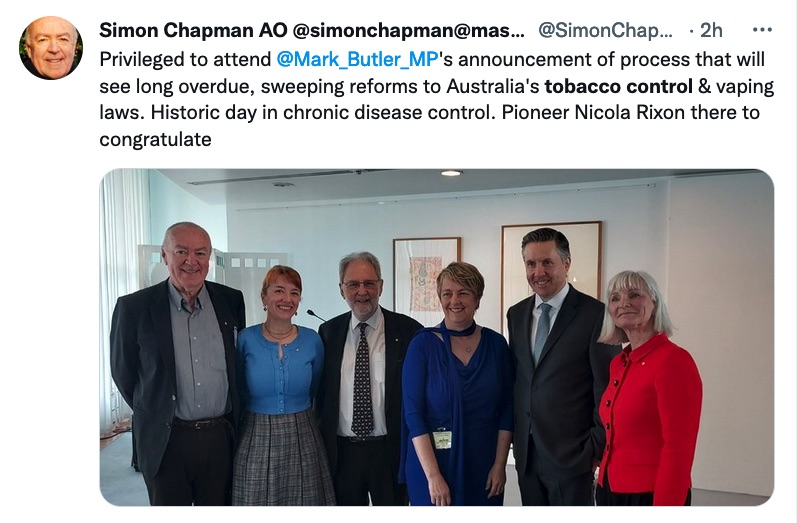 The comments below were added after publication of the article. 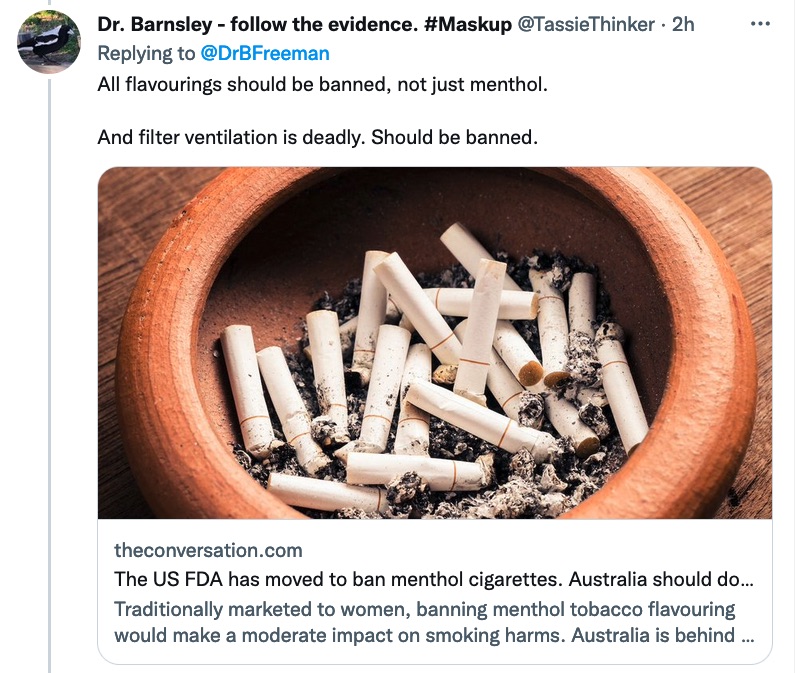 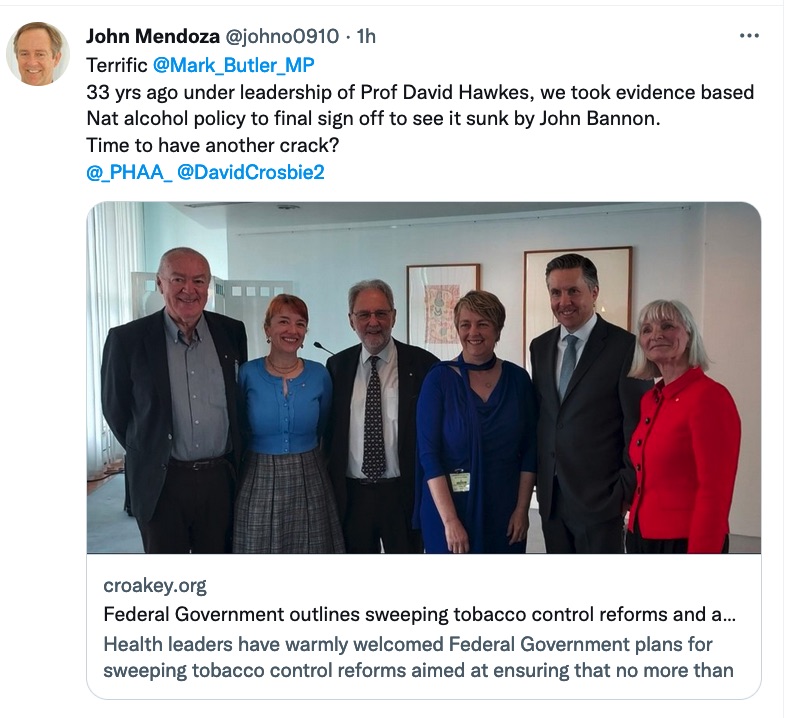 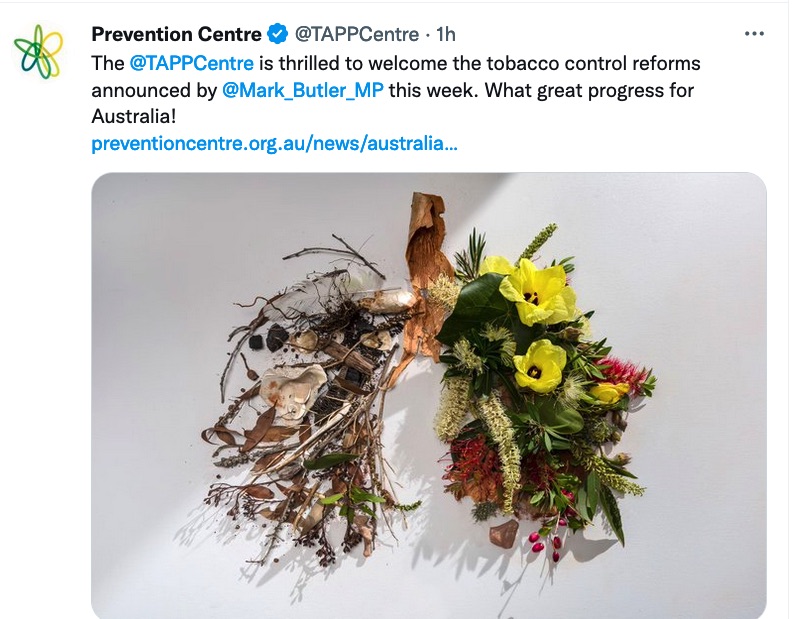 Read the statement: ‘The Prevention Centre welcomes the Australian Government’s new reforms that bring tobacco control into the 21st century.’ 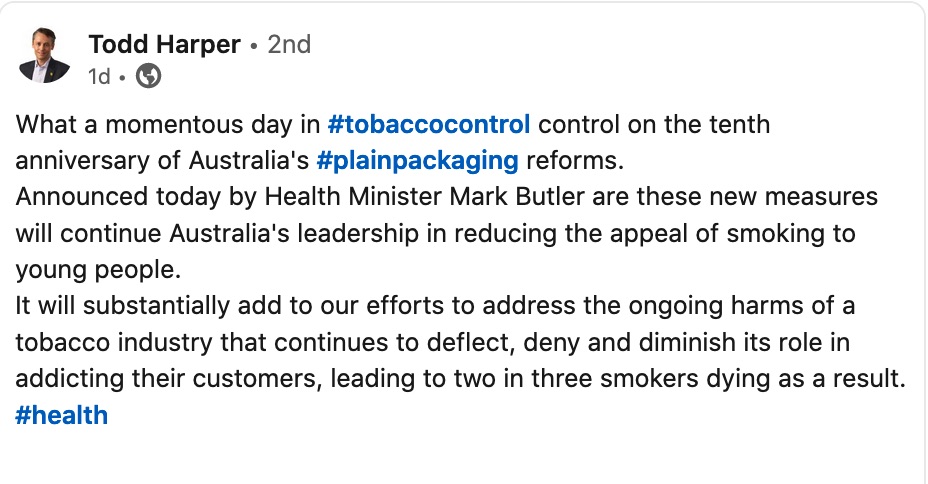 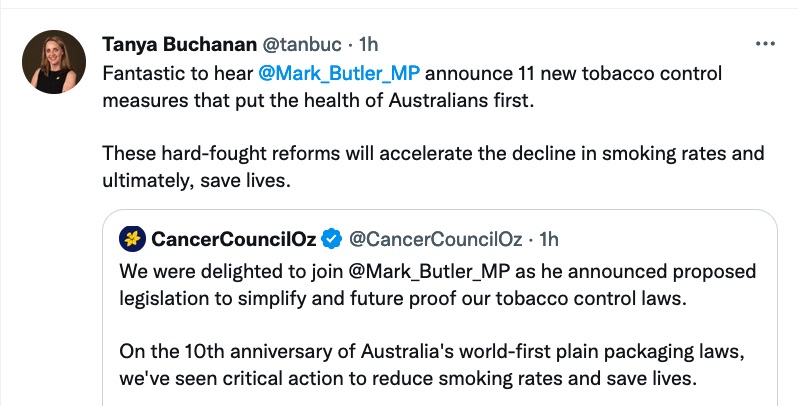 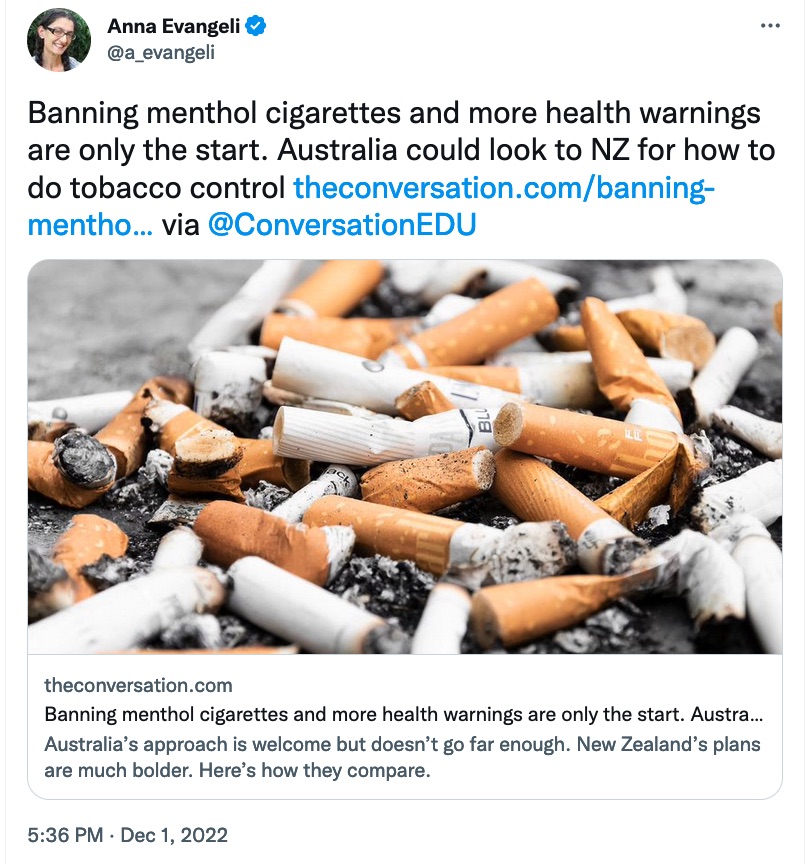 Read the article at The Conversation.