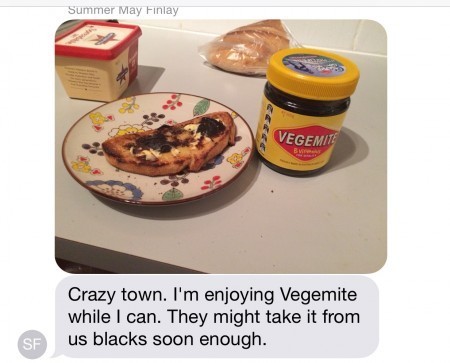 Indigenous Affairs Minister Nigel Scullion’s foray into Vegemite-based policy has won global headlines for a suggestion that the product should be restricted in some remote communities to stop moonshine production – even Time Australia inhaled.

But the weight of opinion – including from public health experts, police, and scientists – seems to suggest the recommendation should be, uhm, toast…

Public health expert Dr John Boffa has raised the potential for the media splash to do harm, by stereotyping Aboriginal people, encouraging people to experiment with Vegemite, and by undermining effective, community-led strategies to reduce alcohol-related harms. He told radio this morning: “Some stories aren’t worth telling.”

Strangely enough, there hasn’t been anywhere near this level of media attention for a recent House of Representatives Standing Committee on Indigenous Affairs report that made a raft of sensible recommendations for addressing alcohol-related harms.

Croakey thanks Dr Sharman Stone, who chaired the Inquiry into the harmful use of alcohol in Aboriginal and Torres Strait Islander communities, “Alcohol, hurting people and harming communities”, for permission to cross-post her introduction to the report, as part of the #JustJustice series.

Below her article are the report’s recommendations – for anyone interested in actual policy, and particularly in reducing the over-incarceration of Aboriginal and Torres Strait Islander people.

The consumption of alcohol at high risk levels is a national issue, however, the focus of this inquiry is the harmful use of alcohol in Aboriginal and Torres Strait Islander communities.

Many reports and studies have recommended stemming the flow of alcohol to address the problems, but usually these works do not analyse why a person drinks at levels which cause them and their loved ones harm. The social and economic determinants of harmful alcohol use such as unemployment, poor housing, racism, trauma, poor education and peer pressure mean that Aboriginal and Torres Strait Islander communities are overly impacted by the harm caused by alcohol consumed at high levels.

A recent Amnesty reports note that it costs $440,000 per year to keep one young person in detention in Australia. This report recommends that justice reinvestment strategies should redirect these resources to overcoming the deprivation and despair in so many Aboriginal and Torres Strait Islander communities.

This report addresses strategies and treatments found to help in addressing the harmful use of alcohol. Community led solutions are always the key to uptake and success. Unfortunately slow government processes, for example approving community produced alcohol management plans and the short length of project funding often frustrates community initiatives.

The magnitude of the problem caused by high risk consumption of alcohol is often hidden by the lack of collection of useful data for example at the time of hospital admissions, when children are put into out of home care because of their neglect, when people are incarcerated because of alcohol related crime and when children are born with Fetal Alcohol Syndrome (FAS) or Fetal Alcohol Spectrum Disorder (FASD) at some of the highest rates in the world.

The committee found examples of the world’s best practice at places like Groote Eylandt and Fitzroy Crossing. These communities, led by women’s initiatives, have demonstrated courage and determination to tackle alcohol harm to provide a safe environment for their families and community. The committee commends them and hopes that their strategies can be used as examples of a way forward for other communities.

FASD or FAS is creating generations of children whose brain damage will reduce their potential to live lives full of promise and well-being. The rates of FAS and FASD in some Aboriginal and Torres Strait Islander communities in Australia are amongst the highest in the world and yet FAS and FASD are not recognised as a disability for many social security allowances and payments.

The lack of knowledge about, and recognition of FASD and FAS extends beyond the failure to have it officially recognised for social security and NDIS purposes, it also needs to be understood in schools, the criminal justice system and in the health sector.

The committee found that impacts of alcohol on children in communities represents a national tragedy as it is manifested in children growing up with fathers, and increasingly mothers, who are incarcerated, as the children’s abuse and neglect leads to the need for out of home care at record levels, missed schooling and too often ultimately become young alcohol addicts or abusers of other illicit substances.

This committee urges adoption of these recommendations as a matter of urgency given the extent of harm and intergenerational afflictions when alcohol is consumed at such high risk levels.

Social and economic determinants of harmful alcohol use

That the Commonwealth Government, states and territories, at the late 2015 Council of Australian Governments (COAG) meeting, place harmful impacts of alcohol on the agenda for coordinated action. This should:

• formally recognise the social and economic determinants of harmful uses of alcohol namely poverty, mental health, unemployment, an ongoing sense of grief and loss, alienation, boredom, cultural acceptance of drunkenness, ease of access and cost of alcohol, peer pressure ‘to drink’ and epigenetics in some Aboriginal and Torres Strait Islander communities and for some individuals

• ensure that within each specific target of Closing the Gap in Indigenous Disadvantage, the impact of alcohol is recognised in all strategies and targets including addressing the social and economic determinants of high risk drinking, and

• develop a framework, methodology and resource allocation for the collection and publication of a national standardised wholesale alcohol sales dataset. The framework and relevant agreements should be in place by December 2015 with comprehensive data available no later than February 2017.

That all strategies developed or funded by the Commonwealth or other governments are developed in partnership with the relevant Aboriginal and Torres Strait Islander peoples and/or their organisations.

That the Commonwealth develops a public awareness campaign, highlighting the risks of alcohol consumption, focussing on:

• where to find help to reduce harmful drinking

• where to find help to reduce alcohol related violence, and

• providing information on other diseases associated with risky drinking.

The campaign should have sections targeted for populations in the criminal justice system and the education system.

That the committee recommends:

• the introduction of a national minimum floor price on alcohol, and

• prompt consideration be given to the recommendations of the Henry Tax Review on volumetric tax.

That the states and territories conduct detailed analysis of any demand increase for liquor licences particularly in areas of high risk drinking, with a view to moving towards a risk-based licencing system similar to that of New South Wales.

That the Commonwealth takes steps to ensure a nationally consistent and coordinated approach to alcohol advertising, including:

• Banning alcohol sponsorship of sporting teams and sporting events, including but not limited to those in which children participate or may be involved, and

• That the Australian Communication and Media Authority change the Commercial Television Code of Practice to ensure that alcohol is not able to be advertised before 8.30pm and that no exemptions are given for alcohol promotion during sport broadcasting.

That governments at all levels:

• ensure that communities are empowered to develop the strategies that will work for their communities, and

• cooperate and facilitate any work in Aboriginal and Torres Strait Islander communities which aims to change the liquor trading hours in their community.

Community Alcohol Management Plans and other community driven strategies need to be reviewed and processed within a maximum of a six month period, including where any alterations are recommended.

The current backlog of Community Alcohol Management Plans in the Department of Prime Minister and Cabinet need to be cleared by January 2016.

That the Northern Territory Government re-introduce the Banned Drinker’s Register and set up a comprehensive data collection and evaluation program which monitors criminal justice, hospital and health data.

That the Commonwealth re-establish the National Indigenous Drug and Alcohol Committee.

That where the Commonwealth funds Aboriginal and Torres Strait Islander alcohol treatment and support programs, these are funded over a longer cycle for at least four years, particularly for well-established and successful programs.

That the Commonwealth and key Aboriginal and Torres Strait Islander groups ensure access to training and career pathways for alcohol treatment and support workers. The employment conditions should be fair and equitable.

That the Department of the Prime Minster and Cabinet ensure that a full range of evidence-based, best practice treatments are available in order to meet the needs of all Aboriginal and Torres Strait Islander people, regardless of where they live. The treatment services should provide for families, follow-up services, and include detoxification and rehabilitation.

That Commonwealth, states and territories, through the COAG process implement justice reinvestment to reduce the number of Aboriginal and Torres Strait Islander people incarcerated as a result of harmful alcohol use.

That the Northern Territory Government prioritise the resourcing of voluntary alcohol treatment and rehabilitation programs in place of the Alcohol Mandatory Treatment program.

That the Commonwealth, as a matter of urgency, increase its efforts to ensure that consistent messages:

• about the risks of consuming any alcohol during pregnancy, and

• about the importance of supporting women to abstain from alcohol when planning pregnancy, when pregnant or breastfeeding to reduce the risk of Fetal Alcohol Syndrome and Fetal Alcohol Spectrum Disorder are provided to the whole community.

That the Commonwealth, as a priority, ensure that the National FASD Diagnostic Tool and accompanying resource are released without any further delays.

• information and education on alcohol and drug exposed children’s behaviour, and

• details of the impact on the child’s mental health and their achievement at school.

• include FAS and FASD as a recognised disabilities in the Better Start for Children with a Disability initiative, and

• include FASD in the operational Guidelines for the National Disability Insurance Agency.

That the Commonwealth, in consultation with the FASD Technical Network, include in the appropriate table in the Social Security Tables for the Assessment of Work-related Impairment for Disability Support Pension Determination 2011:

• A person with Fetal Alcohol Spectrum Disorder who does not have an IQ below 80 should be assessed under this Table.

That the Commonwealth, in consultation with the FASD Technical Network, and relevant organisations from the criminal justice system system:

• develop a model definition for cognitive impairment, and

• conduct a review of Commonwealth law and policy to identify where eligibility criteria need to change to ensure that people with FAS and FASD and other cognitive impairments can be included.

Determining patterns of supply and demand

That the Australian Institute of Health and Welfare review and update the methodology and instrument of the National Drug Household Survey to obtain reliable estimates on Aboriginal and Torres Strait Islander and non-Indigenous illicit drug and alcohol use. These changes should be implemented for the conduct of the 2017 survey. 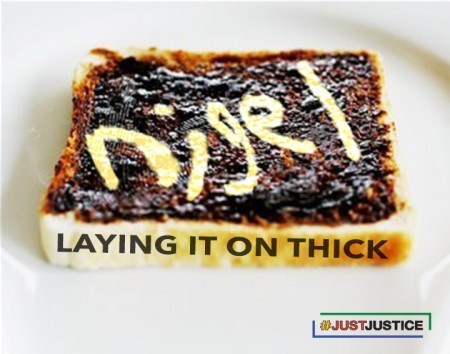 Croakey acknowledges and thanks all those who donated to support #JustJustice. We also thank and acknowledge our premium sponsors, the Jesuit Social Services, and Frank Meany of One Vision.

PrevPreviousPut equity at the heart of debate about primary health care futures
NextWinter hospital bed crisis – could we be doing better?Next