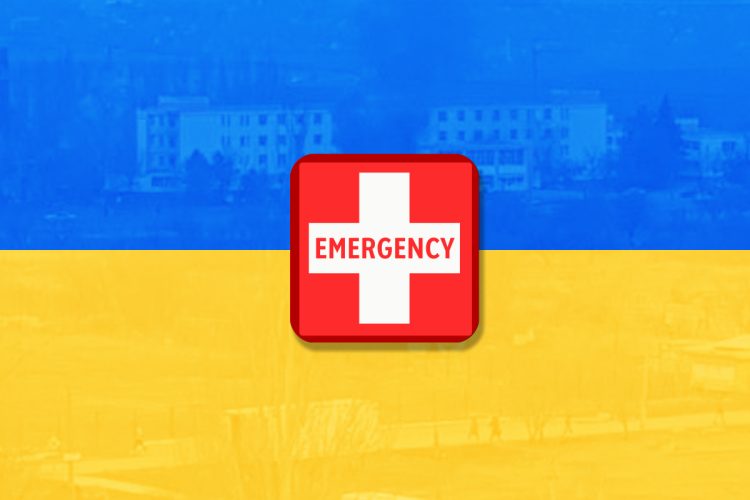 In Ukraine, patients, health facilities and professionals are under fire. Image by Mitchell Ward

As the Russian invasion of Ukraine intensifies, health and medical leaders have expressed solidarity with the people of Ukraine, and warned against attacks on civilians and healthcare facilities.

Professor Tarun Weeramanthri, president of the Public Health Association of Australia (PHAA), tweeted that war and conflict bring death and misery to millions, and that the PHAA “stands with people in Ukraine, their relatives and friends in Australia, public health colleagues in Europe and peacemakers everywhere”.

The PHAA cited a World Federation of Public Health Associations (WFPHA) resolution from 2011 that describes war as the source of some the world’s worst public health catastrophes, with devastating impacts upon people as well severe, long lasting environmental effects.

“Because war affects all public health workers in profound and wide-reaching ways, it is critical they embrace their responsibility to take a stand on how the profession of public health can help solve this most important of public health problems,” the resolution says.

The WFPHA issued a statement on 25 February stating: “The world community of people working for the public’s health know that war, and any form of armed conflict never solves any issues, in the contrary induces physical, mental and moral damage to all. Today, we are witnessing wars around the globe. The most recent start of a war in Ukraine is not acceptable, by no means. The short and long-term damages to both the Ukrainian and Russian people and the global community are enormous.

“As professionals working for the public’s health all over the world we condemn the attack on Ukraine. We ask the governments, the United Nations organisation and the government of the Russian Federation to do everything to stop this absurd explosion of aggression on people’s lives, their living conditions and those of the generations to follow.”

The World Medical Association said it deplored the aggression in Ukraine by Russian leadership and called on Russian leaders to respect the work of doctors and nurses in Ukraine and the neutrality of health care institutions.

Dr Karen Price, President of the Royal Australian College of General Practitioners (RACGP), tweeted that the College offered support and empathy: “Our hope is that the world responds in a way that respects Ukraine’s sovereignty and protects life, property and culture. We are thinking of you.”

World Health Organization (WHO) Director-General Dr Tedros Adhanom Ghebreyesus said he was “heartbroken and gravely concerned for the health of the people in Ukraine in the escalating crisis. The health system must continue to function to deliver essential care to people for all health issues”.

The WHO Regional Office for Europe expressed “deep concern for the health and well-being of all affected populations” and warned of the risk of a “humanitarian catastrophe” in Europe.

“WHO/Europe, through our Country Office in Ukraine, continues to deliver much-needed support on urgent health issues, particularly in the face of an ongoing poliomyelitis outbreak and the long-running COVID-19 response,” said its statement.

“WHO/Europe is working closely with all United Nations partners to rapidly scale up readiness to respond to the expected health emergency triggered by the conflict, to protect our staff, and to minimise disruptions to the delivery of critical health-care services.

“The right to health and access to services must always be protected, not least during times of crisis. Health workers, hospitals and other facilities must never be targets and must be allowed to continue to serve the health needs of communities. The protection of civilians is an obligation under international humanitarian law.” 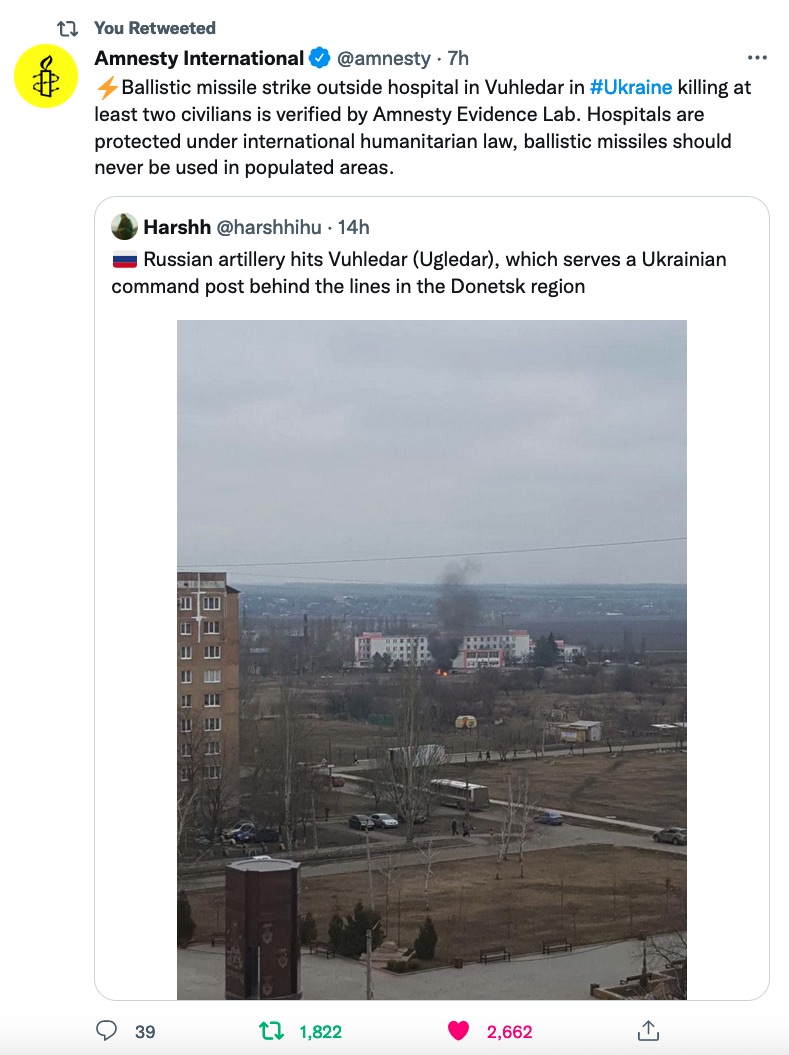 Martin McKee, Professor of European Public Health at the London School of Hygiene & Tropical Medicine, observed that many Russians are showing “incredible courage” in protesting against the invasion. On 24 February, he tweeted:

“I’ve been working with wonderful Ukrainian colleagues for over 20 years – my thoughts are with everyone there today. But also with my many good Russian friends, who I am sure are just as shocked as me. This is not a war between peoples.” 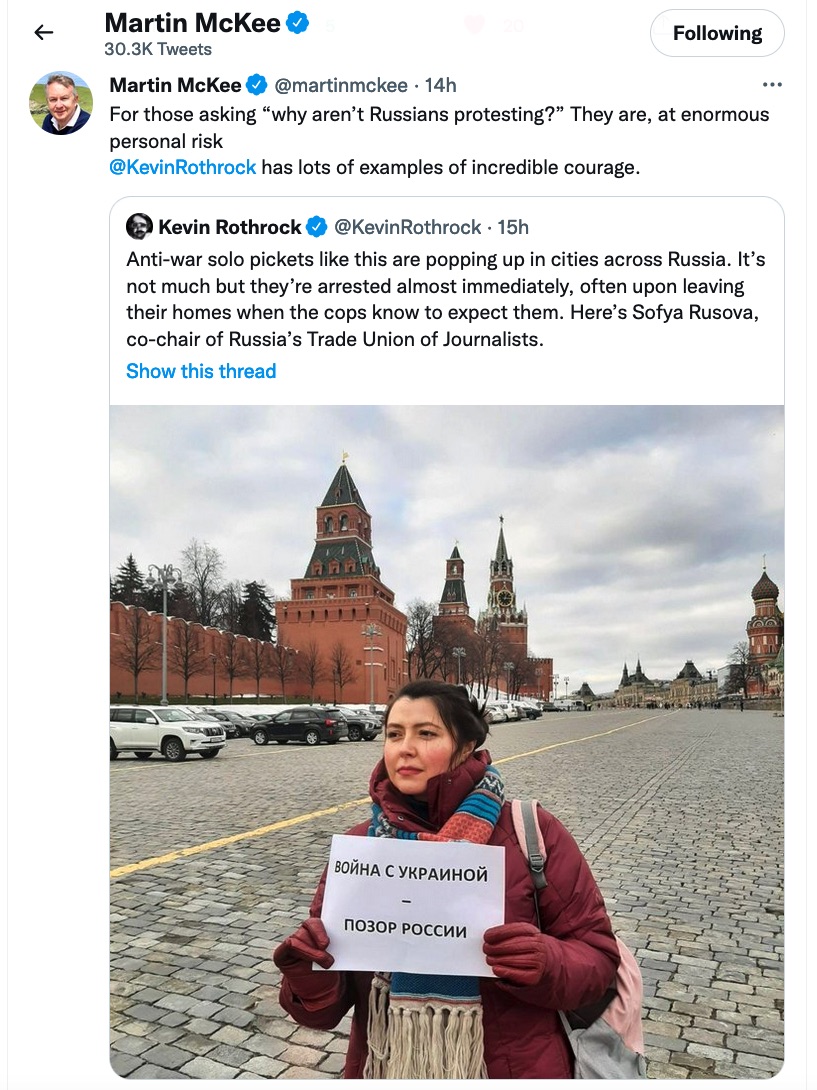 The health impacts of Russia’s invasion of Ukraine are both immediate and obvious – the deaths, the damage, the terror – as well as wide-ranging and less obvious. When world leaders are focused on war, there is so much less capacity for dealing with other global crises, including COVID and climate change.

One of the casualties will be Ukraine’s health system, which has undergone significant reform in recent decades, including World Bank investment in the country’s COVID response.

Ukraine has seen big health gains and health reform since the fall of the Soviet Union in 1991, according to an editorial in The Lancet on 12 February, ‘Health and health care in Ukraine: in transition and at risk’.

However, Ukraine has the fourth highest tuberculosis incidence and second highest burden of HIV in the WHO European region, and the article also describes longstanding problems with misinformation and disinformation, with vaccination coverage against COVID-19 in adults being low (33%).

The threat of vaccine-preventable diseases is high due to chronically low routine childhood vaccination rates, as shown by a vaccine-derived polio outbreak last year, and a measles outbreak in 2017–19.

The article foreshadowed the health risks from any further escalation of armed conflict, highlighting the high toll over the past several years from conflict between Ukrainian forces and Russia-backed separatist groups.

Dr Irina Kuznetsova, Associate Professor, School of Geography, Earth and Environmental Sciences, University of Birmingham, has described the impact of this conflict in creating a large internal displaced population. Together with researchers from the University of Oxford and Ukrainian Catholic University, she has investigated the wide-ranging impacts of this “hidden tragedy”.

In April 2021, The Lancet Infectious Diseases published an article exploring the reasons for longstanding vaccine hesitancy in Ukraine among the general population and health workers, which contributed to a big measles outbreak in 2017-2019 and low COVID vaccination rates.

The article cited a Wellcome Trust survey in 2019 that showed that only 29 percent of Ukrainians thought vaccines were safe, while 50 percent thought they were effective. A UNICEF representative said some of the vaccine hesitancy dated back to Soviet times when vaccine administration was not good.

It seems that Russia is also directly implicated in current vaccine hesitancy. A 2018 article in The Lancet, ‘Measles, war, and health-care reforms in Ukraine’, said Kremlin-supported social media accounts were spreading discredited theories about vaccination.

The 2018 article had this prescient conclusion: “…western leaders and Ukraine’s Government must stay focussed and committed to driving through the latest plans to improve the country’s health. However, more zeal is needed to resolve the bloody conflict in the eastern region.” 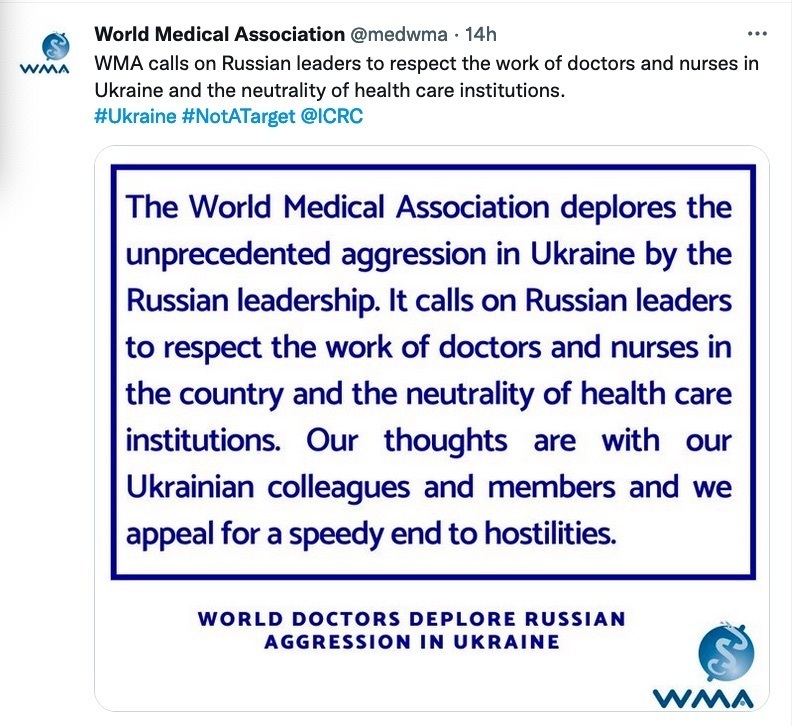 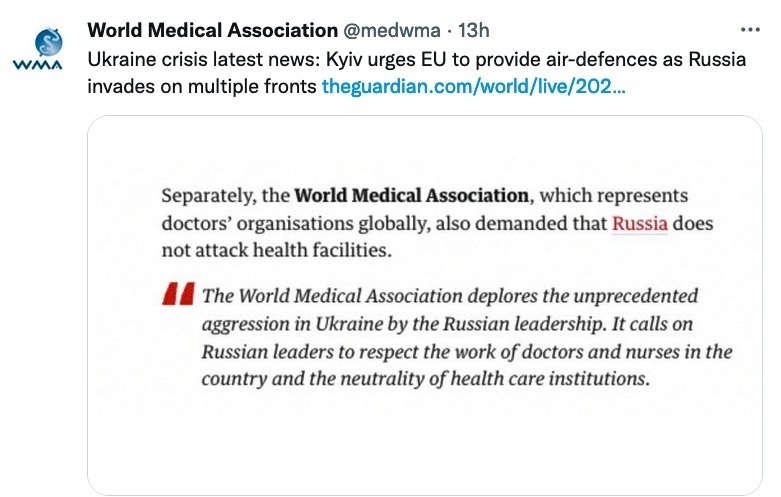 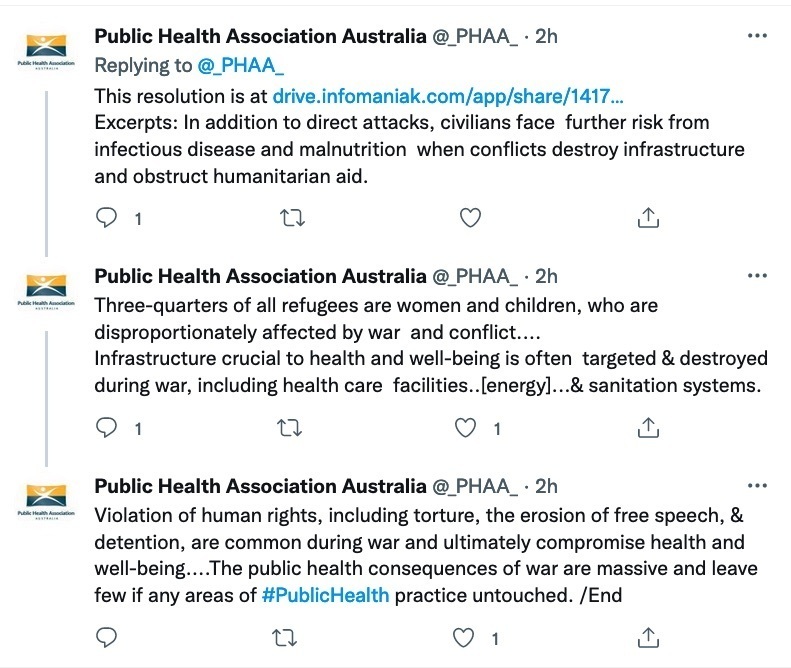 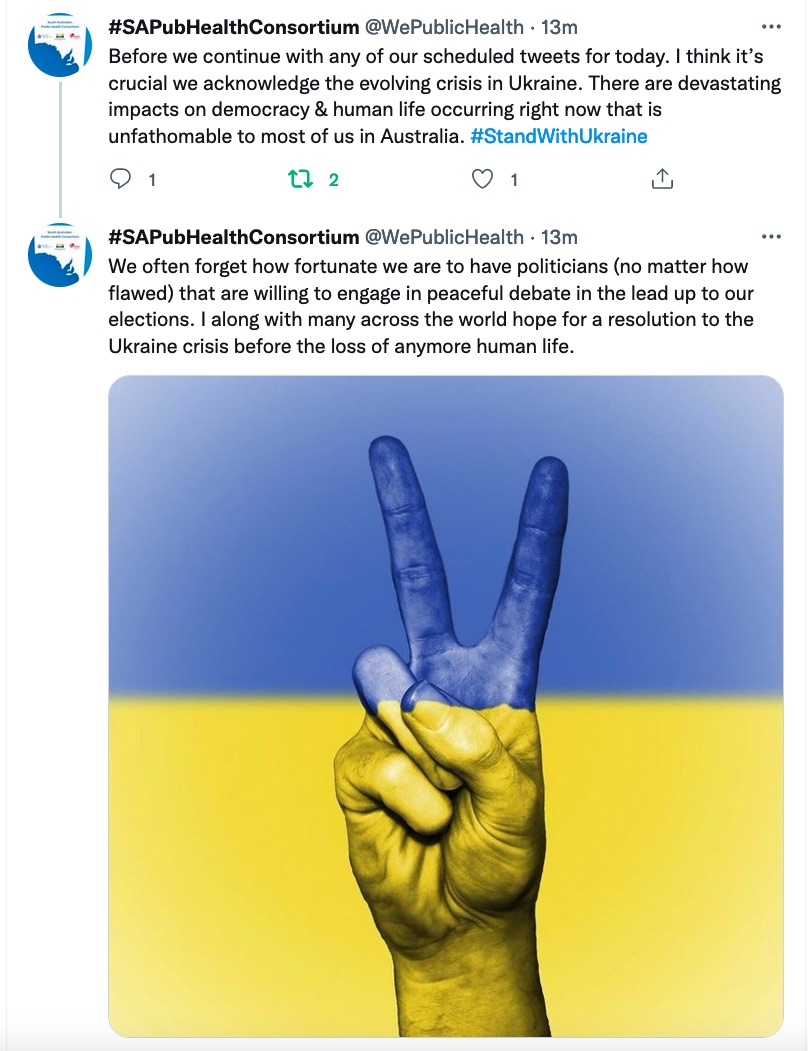 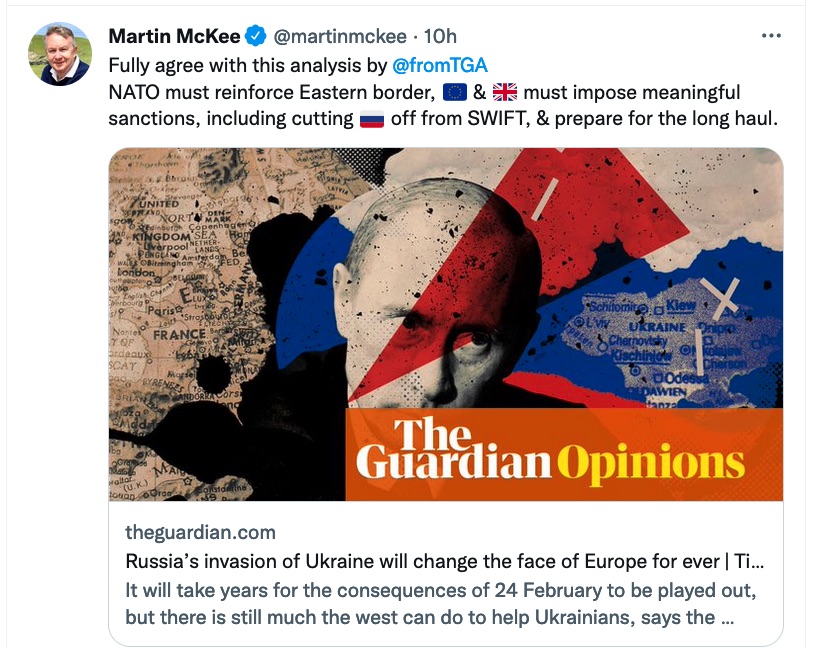 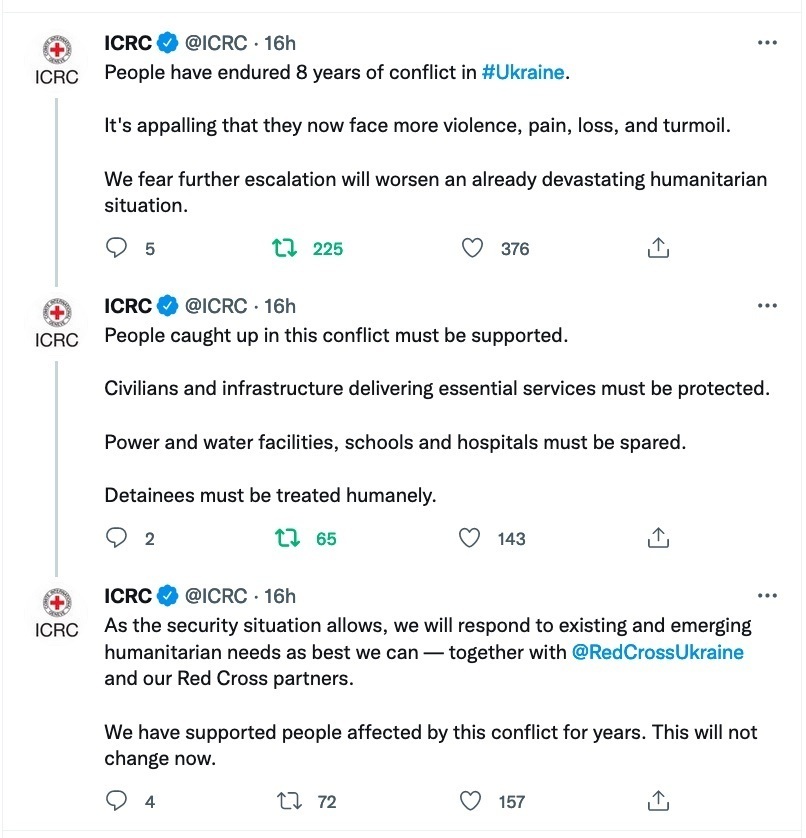 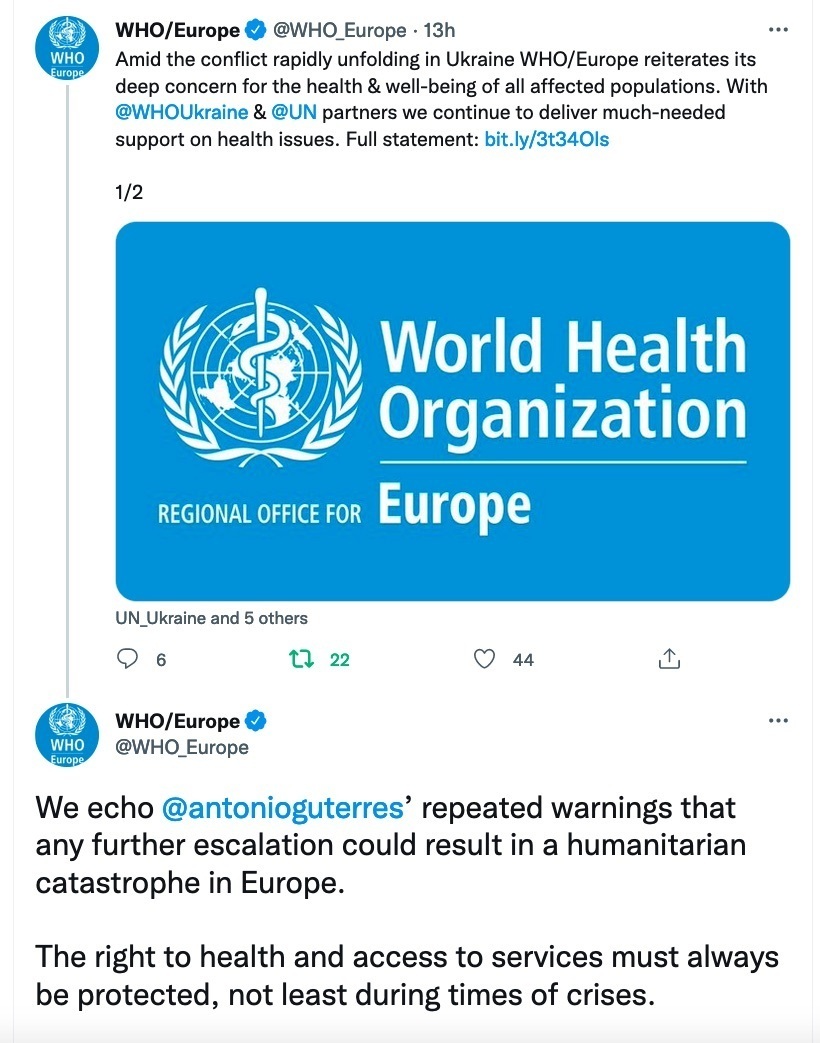 * Note from Croakey: This post was updated on 26 February to include the WFPHA statement.