Is it time to rethink the possibilities for rural health?

‘Possibilities’ was the theme of the final day of #ruralhealthconf, and the ideas put forward by the keynote and concurrent session speakers challenged delegates to broaden their horizons and re-think narrow conceptions of rural health.

From the forces of globalisation, to the impact of domestic economic policies, to the need for reform of local funding arrangements, speakers outlined the forces that will shape our health system in the future and the possibilities these create for rural and remote health.

They include the following:

The possibilities opened up by a new era of globalisation in health….. 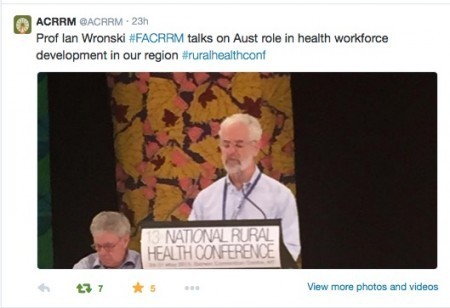 In a keynote address, Ian Wronski, Deputy Vice Chancellor of James Cook University, described the Asia-Pacific region as being in a period of unparalleled change, on the cusp of the globalisation of health care.

He says this provides rural health with new and exciting opportunities but also carries some risk.  One example he provided was the three international agreements on health currently being negotiated by the Australian Government: the Trans-Pacific Partnership (TPP), the Trade in Services Agreement (TiSA) and the ASEAN Framework Agreement on Services (AFiSA).

Professor Wronksi outlined some potential advantages of these agreements, in particular to health professionals. However, he also acknowledged the risks inherent in some of these (see here for more information on the public health implications of the TPP)

Professor Wronski urged delegates to engage with the globalisation of health care and described how most health systems in the Asia-Pacific region are geared around the provision of acute care, rather than the management of chronic conditions. However, their population health needs are shifting more towards chronic disease.  Even the definition of chronic disease has broadened as treatments improve and now includes many cancers and infectious diseases, such as HIV/AIDS.

Australia’s rural health workforce could significantly benefit from this globalisation, according to Professor Wronski. He described how even the most urbanised countries, such as Singapore, are increasingly wanting assistance from Australian rural health professionals to help them meet their health system challenges. In particular, the generalist skills of rural practitioners are proving useful in helping Singapore bridge the gap between hospital and community based health care.

The possibilities of new and innovative technologies…..

Bronwyn Pike, Community Care Lead at Telstra Health, described how her company has spent $100m buying up other telehealth companies and wants to transform healthcare in rural areas.   She outlined the work being done by Telstra to connect rural and remote communities with health services,

A number of the concurrent sessions and poster presentations also focussed on the innovative use of technologies in rural and remote health. 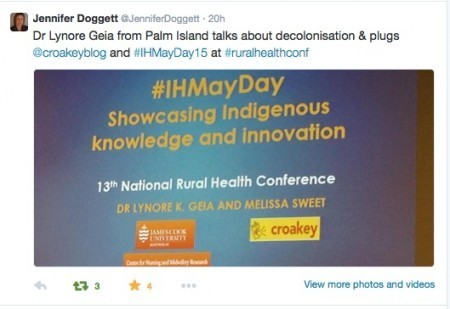 Dr Lynore Geia, a James Cook University Nursing, Midwifery and Research academic and a Bwgcolman woman woman from Palm Island, discussed the important role of Twitter in connecting Indigenous people and described the success of the inaugural #IHMayDay in 2014.

This was a 15 hour Twitter-fest of discussions and advocacy on Indigenous health, receiving nearly 26 million Twitter impressions (the second of these events will take place this Friday, 29th May, using the hashtag #IHMayDay15)

Another innovative project was highlighted in a poster that described a tele-dentistry project targeting residents of rural aged care facilities. This project treated residents of one facility, which was eight hours from the nearest dentist and had last been visited by the Queensland Government’s Oral Health Clinic 3.5 years ago.

As a result of the tele-dentistry project, all residents at the facility have now received dental care and only three had to be transferred to the Oral Health Clinic for further treatment.

However, the conference was also reminded that the adoption of new technologies needs to occur in collaboration with consumers and communities and not simply be imposed on them. It also needs to be coordinated with other existing services in the region

This point was made by Dr Sheilagh Cronin who asked Bronwyn Pike whether Telstra Health was liaising with the Federal Government on telehealth initiatives to ensure that these two major players in the telehealth space are complementing, rather than duplicating, each other’s work.

Others also had concerns about these initiatives, as the tweet below suggests.

Others questioned the focus of new technologies and challenged their advocates to first focus on solving some of the more basic and mundane problems of rural health care.

As one GP at the morning plenary asked, “Why don’t we use technology to ensure people from rural communities get all their city medical appointments on the same day?

He went on to describe how families with sick children in his community can travel up to ten hours in a round trip to the city for one appointment, only to have to turn around and do the same thing a few days later because the appointments could not be scheduled at the same time.

The possibilities of engaging with economic and taxation policies…………

It’s easy to assume that Australia’s population flow in recent years, from rural and regional areas to large urban centres, is inevitable.  However, Julian Disney, Chair of Anti-Poverty Week, pointed out that Australia’s current population distribution is unusual in that we have a greater proportion of citizens living in cities over 1m than any other country (excluding city states).

He made a persuasive case that this was the direct result of successive governments’ economic and taxation policies which combine to ‘suck people into big cities’ away from regional and rural areas.  One example of this is the capital gains tax exemption for the family home, which has effectively driven people into large urban centres and drawn wealth and resources out of rural areas.

Different economic and taxation policies are a possibility for our future and, according to Professor Disney, these should focus on creating more mid-size cities, which would deliver a range of benefits for rural and remote Australia.  However, this would require a greater engagement from the health sector and he challenged all delegates, no matter what their background, to take an interest in economic and tax issues. 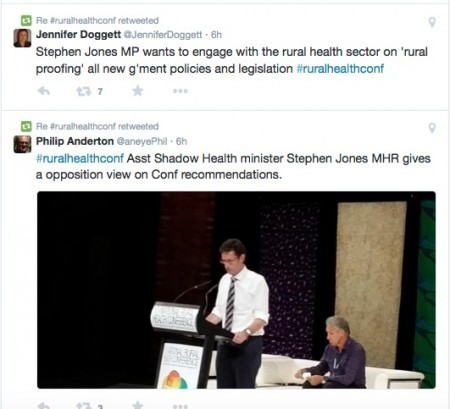 Delegates keen to rise to this challenge may find a willing recipient in Shadow Assistant Health Minister Stephen Jones.

He told the conference that he wants to engage with the rural health sector on ‘rural proofing’ all new government policies and legislation, in response to a popular recommendation from the conference’s Sharing Shed.

The possibilities of place

Dr Jacki Schirmer from the University of Canberra reported on the findings of the 2014 Regional Wellbeing Survey, which showed that a connection to ‘place’ is a key factor in well-being but one often ignored in health policies and programs.

She argued that we need to prioritise place-based interventions over single-issue interventions, especially in disadvantaged areas where multiple, inter-related factors need to be addressed. 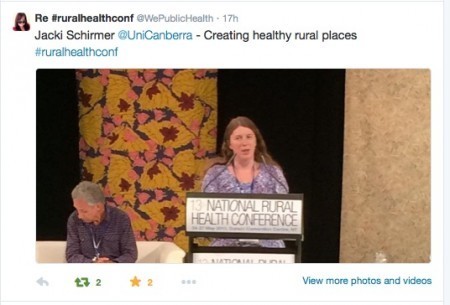 John Paterson, CEO of the Aboriginal Medical Services Alliance of the Northern Territory (AMSANT) argued passionately against the current practice of opening up Indigenous primary health care tenders to what he described as ‘contract hungry NGOs.’

He described the current situation where programs and services are funded in narrow funding streams as inefficient and argued that handing funding back to communities would help them integrate and coordinate services at the community level. 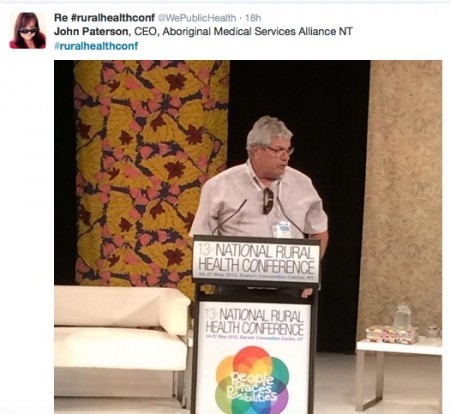 In the final keynote address of the conference, Kylie Strothers told her story as a rural and remote social worker, Jawoyn woman and mother-daughter-wife.

She acknowledged the contribution made by health professionals from the city who travel to live and work in rural Australia but questioned the lack of incentives available to encourage health professionals born in rural and remote areas to remain living and working in these areas as adults.

She left delegates with an inspiring vision of a vibrant rural health sector, equipped with all the resources it needs, including a future rural health workforce, not drawn from cities or other countries, but ‘already out there, sitting in the primary and high school classrooms of rural and regional Australia.’ 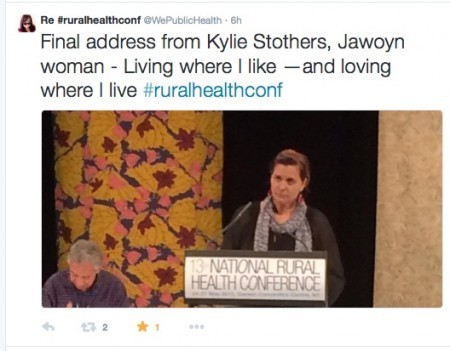 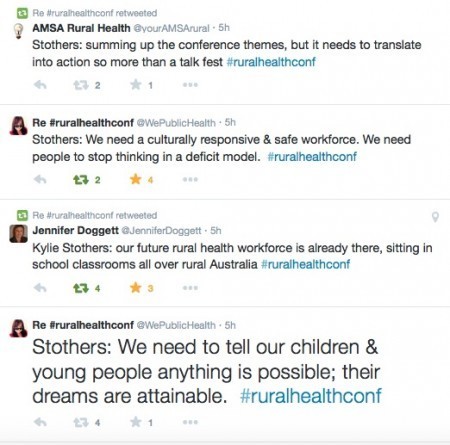 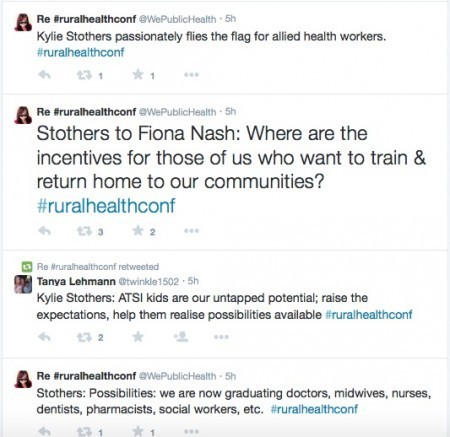 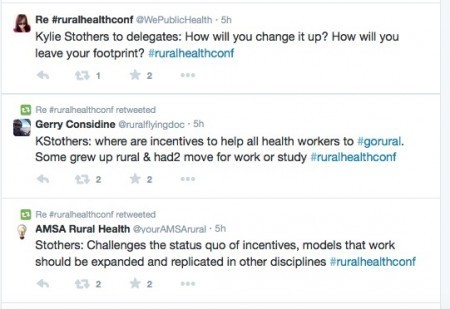 You can read the conference recommendations here, and there will be further reporting on these at Croakey.

Tweeters were very active, and you can check the conference Twitter transcript and analytics here. The analytics below, showing more than 23 million Twitter impressions, are for 23-29 May (Pacific Time: GMT-0700).

Clearly, the conference involved a huge amount of work, and there were thanks to be said. 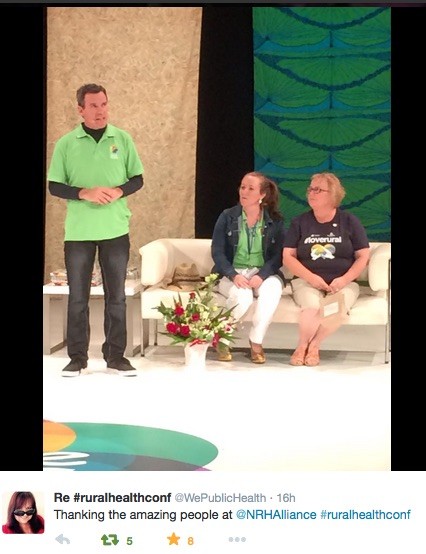 The conference was held a time of considerable uncertainty and stress for many in the sector.

It seems, however, that the engaging and entertaining program gave many a boost, as can be seen by the assessments shared on Twitter below. 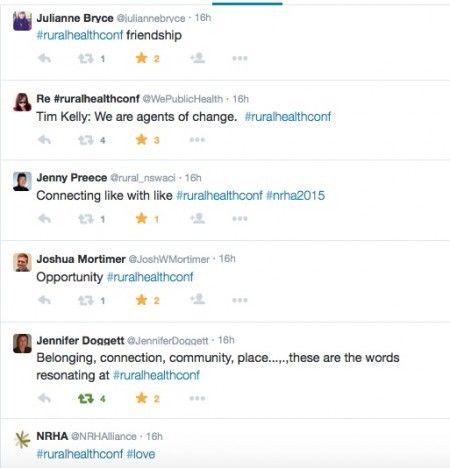 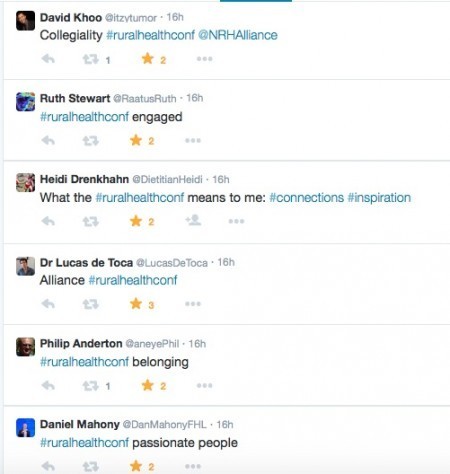 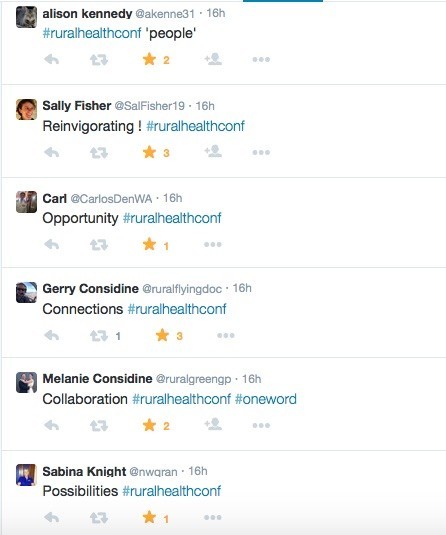 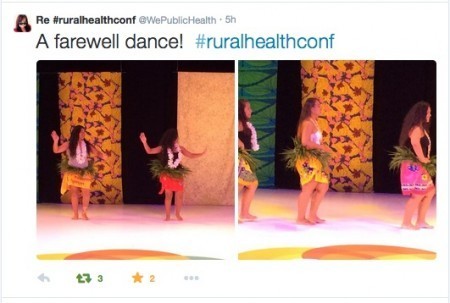 PrevPreviousAnnouncing the program for #IHMayDay15 on Friday – please tune in on Twitter
NextHealth not Harm: The RACP calls for changeNext