Meet a scientific star, a thought-provoking graph, and a killer quote about teaching Indigenous health

The importance of providing supportive and culturally appropriate environments for Indigenous higher education students was highlighted at the Closing the Credibility Gap symposium held in Melbourne last week. 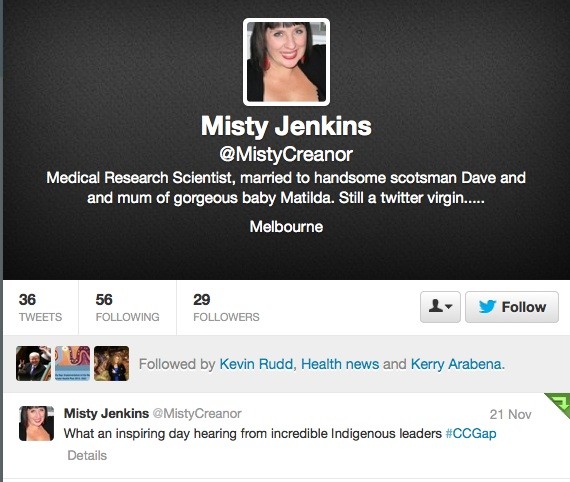 Dr Misty Jenkins concedes her chances of being a star scientist were not high when she was attending Mt Clear Secondary College near Ballarat: female, Indigenous, from a relatively poor family and living in regional Australia.

“I’d never met anyone who went to university,” she recalled.

But become a star scientist, she did, heading to university to major in microbiology and immunology, where she was mentored by Nobel Prize winning immunologist Professor Peter Doherty and Professor Steve Turner, and became the first Indigenous Australian to study a post-doctorate at Oxford or Cambridge.

She is a Postdoctoral Biomedical Research Fellow at the Peter MacCallum Cancer Centre in Melbourne, and recently won a major Australia and New Zealand Women in Science Fellowship.

She’s also a great communicator of science. Her presentation at last week’s Closing the Credibility Gap symposium was titled: ‘My educational journey in understanding serial killers – cytotoxic T cells and the immune response to cancer’.

It was like a rundown on an SAS operation, peppered with talk of ‘assassins’ and ‘hand grenades’, the white blood cells that eliminate infected and cancerous cells.

She followed another presentation by Associate Professor Shaun Ewen, on how tertiary institutions can ‘catalyse’ change in Indigenous health.

Ewen referred to this graph (below) from the work of the Medical Deans of Australia and New Zealand, which highlights a big gap between recruitment of Indigenous students (and Maori students in New Zealand) in medicine compared to graduations. 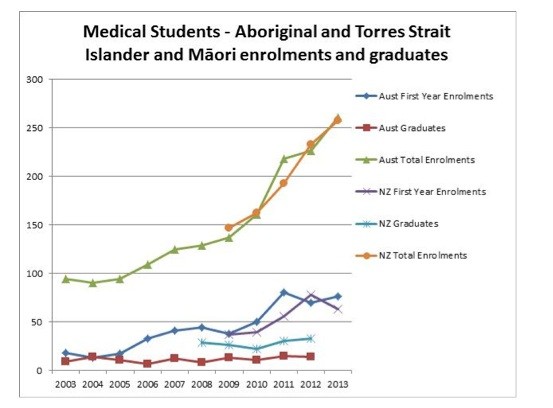 “We’re not graduating Aboriginal and Torres Strait Islander students at the rates we are other students,” he said. (See more on his presentation below).

Jenkins told the symposium it had been “scary” to head off from Ballarat to university, with little money and away from her supports.

So what made the difference for her – how could she break through the barriers that stop many young Australians, and particularly Indigenous Australians from achieving academic success?

For a start, she acknowledged her lighter skin meant she “wasn’t subject to the physical discrimination and racism that a lot of my cousins were.”

She also had great support through what was then the Centre for Indigenous Education, now Marrup Barak. “When I first moved from home, I was a bit lost, it was completely overwhelming and I was really poor. I could pop in for a cup of tea, support, access to a computer because I couldn’t afford one myself. They were critical to my success,” she said.

Not all universities have such support, and not all students can benefit as she did, she says. Increasing numbers are now mature age students, finally trying to take up opportunities that weren’t available when they were young. But they face many barriers, particularly those who have families and can’t relocate, do placements, or deal with other demands.

“We have to look at putting culturally appropriate things in place to provide support networks for those students. They’re not 18, fresh out of school and living at home with supportive families.”

Engaging more Indigenous people in education is a passion and her work with the Aurora Project has seen eight Indigenous students go on to study at Oxford and Cambridge since she did.

She also visits schools to try to encourage young people to stay on at that level. “It’s crucial to keep them engaged, not just in academia and education, but more culturally because we can lose them from school at a young age,” she said. “I was lucky, I had a chemistry teacher who pulled me aside and said ‘Misty, you need to go to university’. I think for young people, what it takes is to have someone who believes in them.”

The benefit is clear every day in her work. Like most other areas of health, Aboriginal people are over-represented in cancer deaths, with mortality rates 1.5 times higher than non-Aboriginal people.

“There are complex and varied reasons, not solely attributed to lifestyle or genetic predisposition,” she said. “But one thing that’s certainly clear is that higher levels of education attainment are associated with improved health outcomes.”

Health faculties as ‘factories of the future health workforce’

Associate Professor Shaun Ewen said university health faculties need to rethink their model if they are to meet this vision outlined in the National Aboriginal and Torres Strait Islander Health Plan: 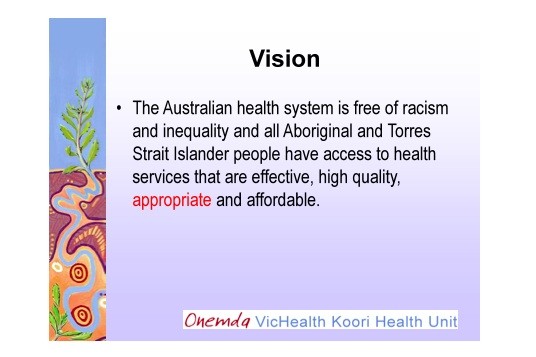 Ewen, who is the inaugural Associate Dean (Indigenous Development) for the Faculty of Medicine, Dentistry and Health Sciences at Melbourne University, said health faculties need to consider both curriculum and the support they provide to Indigenous students to ensure they graduate (see the graph above) in higher numbers than now, certainly at the same rates as other students.

But curricula also had to grasp what the National Health Plan says around social determinants, he said, showing this slide: 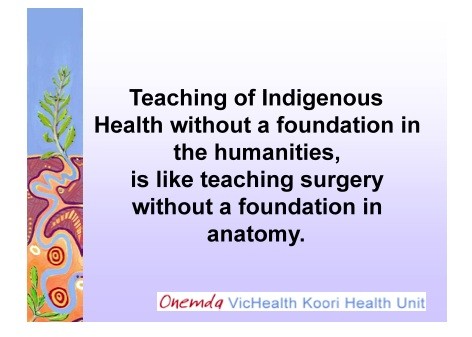 “We have to be careful we’re not putting on Aboriginal 1.01 to make ourselves feel good. We need to work out what the best evidence is and how to best find that evidence so we know the best kind of curriculum will get the best outcomes, for the student and future health practitioner but ultimately for the communities and population groups that need good care,” he said.

He warned that without the full expression of the key areas outlined in the RAP, tertiary institutions can become “places of assimilation” rather than contributing as institutions to Closing the Gap. “I think in that we might find some of the reasons why we are not graduating students as well as we should be.” 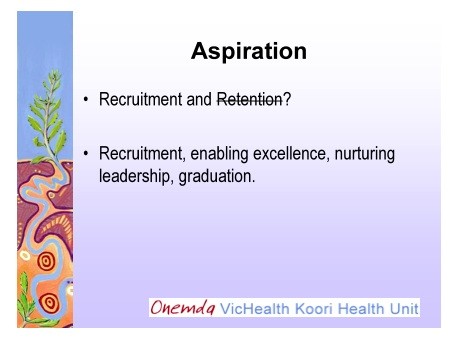