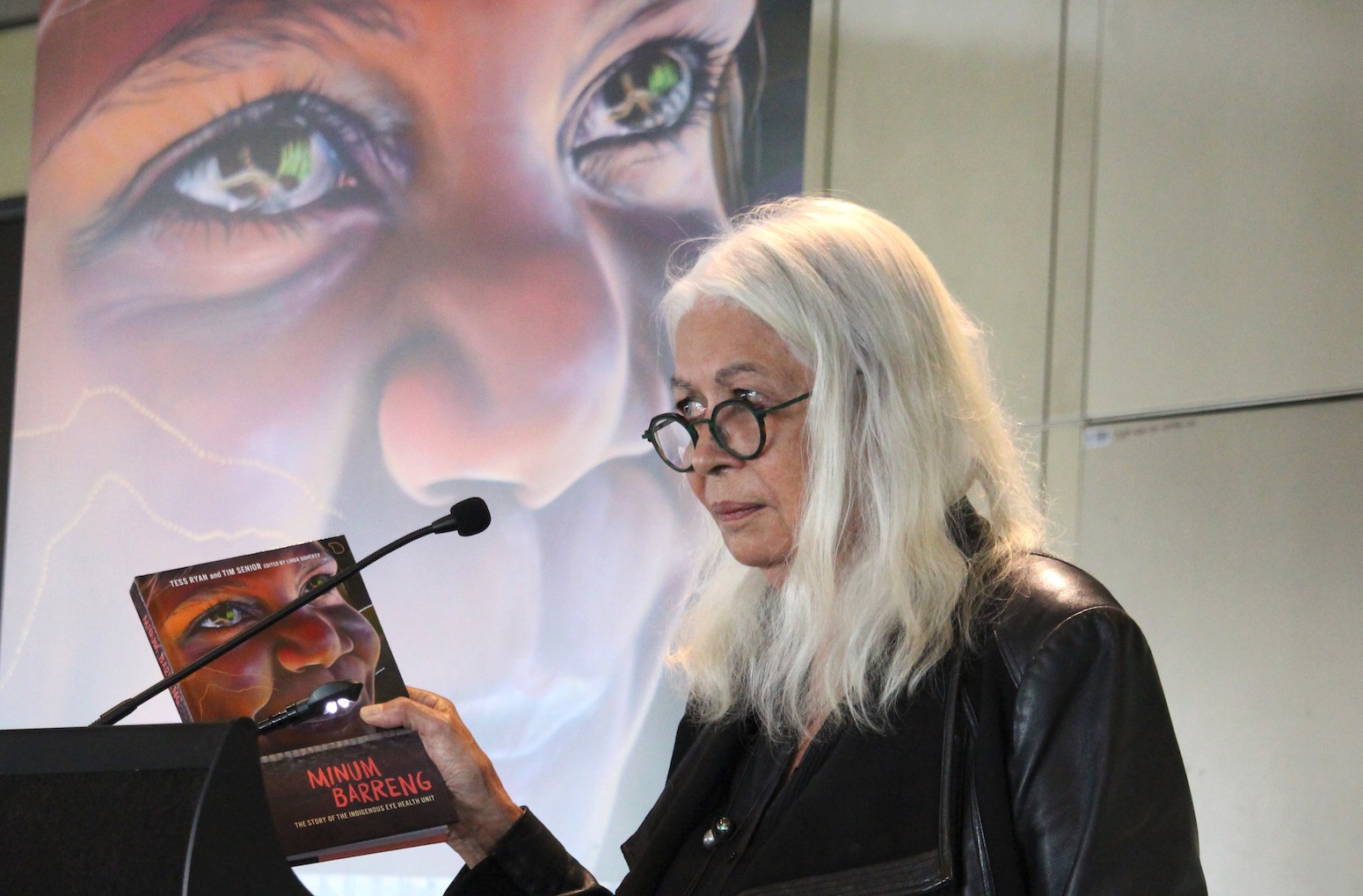 Minum Barreng: The Story of the Indigenous Eye Health Unit

This article was first published on Wednesday, December 14, 2022.

Introduction by Croakey: A new book investigates the history of efforts to improve eye health for Aboriginal and Torres Strait Islander people. ‘Minum Barreng: The Story of the Indigenous Eye Health Unit’ is described by Melbourne University Press thus:

“Aboriginal and Torres Strait Islander children have the best eyesight in the world. Yet by the age of 40, Indigenous people in Australia are six times more likely to go blind from preventable diseases than non-Indigenous Australians. Things happen during the life course to make vision loss increase, and many of these reasons can be traced to a lack of care, a lack of access to care, and the impact of colonisation.

“[This book] shines a light on the determined team who have worked with Aboriginal and Torres Strait Islander peoples since 2008 to prove that Australia has the will, the means and the moral obligation to close the gap in this serious health inequity. This is a story of vision in both senses of the word – and of strength and opportunity.”

Marcia Langton AO, of the Iman people, Associate Provost and Redmond Barry Distinguished Professor in the Melbourne School of Population and Global Health at the University of Melbourne, recently launched the book and also wrote the foreword, which is published below with permission.

Almost a lifetime has passed since Fred Hollows, Gordon Briscoe and Hugh Taylor established the National Trachoma and Eye Health Program in 1976, when Indigenous eye health in Australia was not just poor, but trachoma was endemic, harmful and debilitating, affecting up to 90 percent of the older Central Australian Aboriginal population and more than 70 per cent of those in the north.

These three were passionate about eliminating the scourge of trachoma from Aboriginal and Torres Strait Islander peoples. In just two years they achieved a first in Australian health history – specialist services to a huge proportion of the population of Indigenous people. The teams they assembled screened more than 100,000 people in 465 communities, performed 1,000 operations, treated 27,000 people for trachoma and delivered 10,000 pairs of individually prescribed glasses.

Sandy blight, or trachoma as it came to be known, was common among the early white settlers but had largely disappeared as white Australia grew rich and achieved the necessary outcomes in the key social determinants of health, such as housing, potable water, sewerage and readily available medical and health care. For Aboriginal and Torres Strait Islander peoples, this did not happen. On the contrary, their living conditions were reduced to such poor levels as to cause a health disaster.

The prevalence of the easily curable disease, trachoma, was just one facet of the crisis and, despite the best efforts of those working on the national program in the 1970s, trachoma remained a significant eye disease until Professor Hugh Taylor returned to the fray.

In 2008, he found that Aboriginal and Torres Strait Islander peoples had six times more blindness than other Australians. The leading cause of blindness then was unoperated cataract. Compared with other Australians, Indigenous Australians were twelve times more likely to be left blind from cataract; they had to wait 50 percent longer for surgery, and surgery was performed seven times less frequently. The indifference to Aboriginal health had not changed.

What had changed, though, was the growth of a strong and largely effective Aboriginal-controlled health sector with more than 150 clinics operated by Indigenous-owned corporations to address the health disadvantages. What was missing was a systemic approach to treating Indigenous eye health. This key problem was addressed by Professor Taylor and his teams, including some who had worked for the original trachoma program in the 1970s.

Together, Taylor and his team at the Indigenous Eye Health Unit developed the ‘Roadmap to Close the Gap for Vision’, and launched it in 2012. They described the patient journey as a ‘leaky pipe’ and set about fixing the leaks. This guided all health service providers to ensure that patients with eye disease receive all the treatment required and receive it promptly. Since then, great progress has been made in closing the eye health gaps.

Working cooperatively in 64 self-defined regions covering the entire land mass of Australia and all of the Indigenous population, the Indigenous Eye Health Unit has contributed to remarkable reductions in disease incidence. By late 2021, the number of hotspots for trachoma, for instance, was reduced from 56 to 16 communities, and the number of communities with (or at risk of) trachoma shrank from 205 to 65. In 2012, the number of days that patients waited for cataract surgery was 140 days, but by 2019 patients waited 82 days. Many other positive results have been reported.

The establishment of the Indigenous Eye Health Unit in the Melbourne School of Population and Global Health has been a game-changer, bringing together science, community and problem-solving to great effect. The partnerships across the health sector and the development of the workforce in the field of eye health medicine and service delivery are also remarkable, not least because of the small but growing number of Indigenous ophthalmologists and optometrists.

I commend this book to you so that you may also marvel at the progress made, often against the odds, to close the gaps in eye health for Indigenous people.

Croakey thanks and acknowledges Rachael Ferguson for these photos from the launch on 2 December. 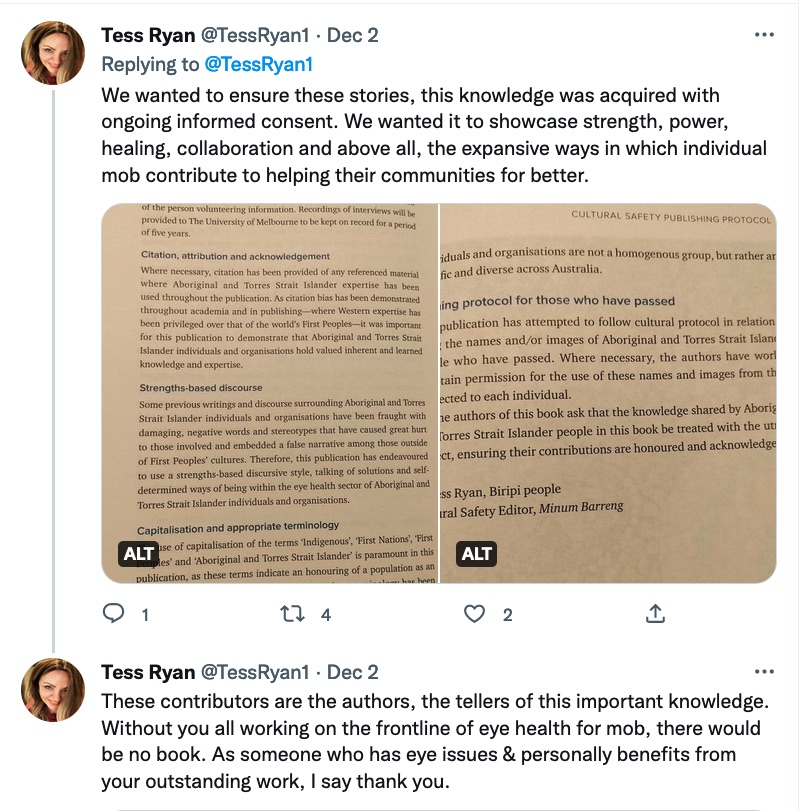 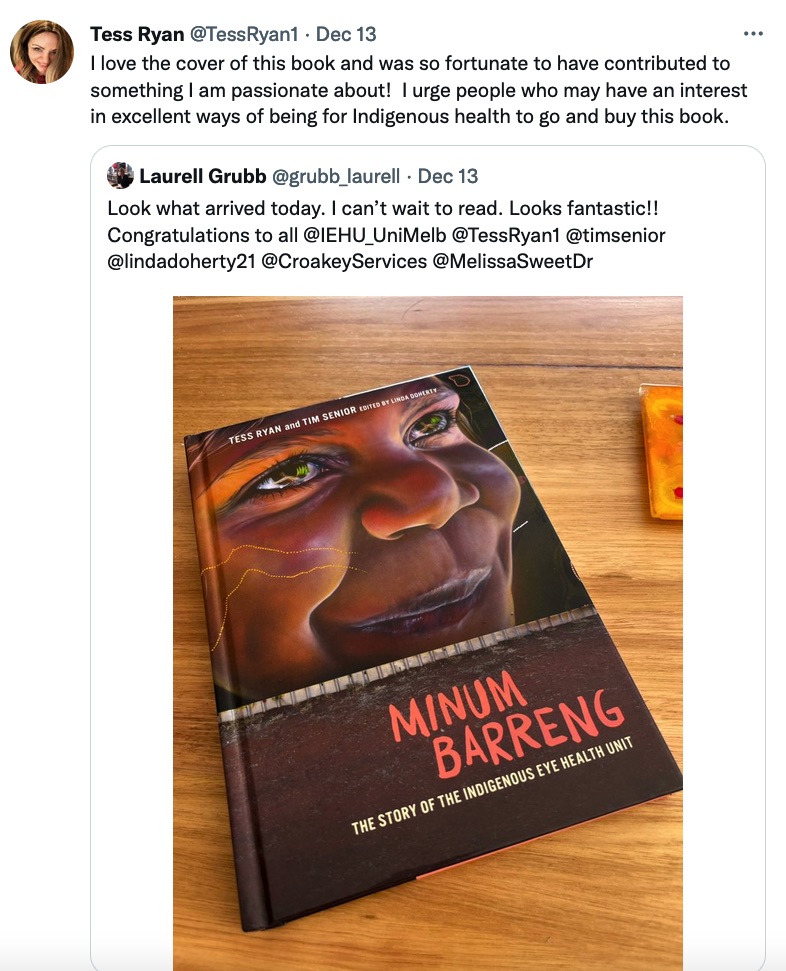 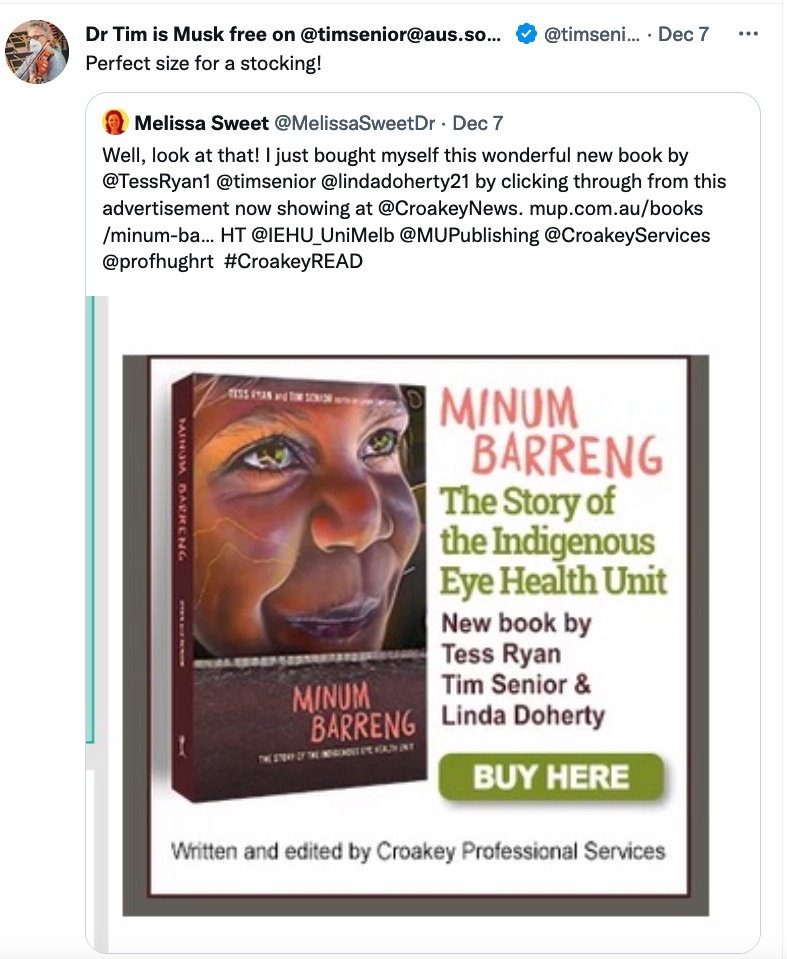 PrevPreviousCOVID safety at health and medical conferences: what more can be done?
NextListen to the voices of lived experience of Long COVIDNext