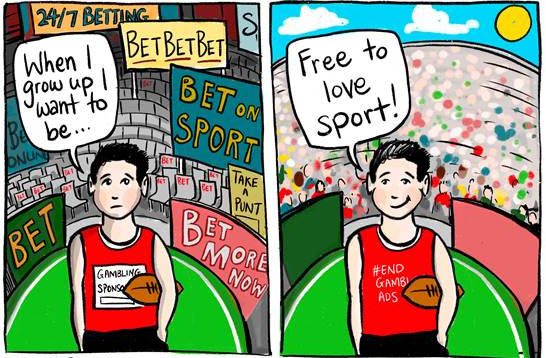 "We stamped out smoking ads, now it's time to kick gambling out of sport." #EndGamblingAds campaign by the Alliance for Gambling Reform: Image: Jess Harwood Art.

The Lancet Public Health Commission on gambling was established earlier this month, assembling world leaders in public health, mental health, policy, and gambling studies, and supported by an advisory group that will include those with lived experience to investigate the global issues related to gambling.

It’s been welcomed by people with lived experience of gambling harm in the UK, as well as in Australia, home to the biggest gamblers in the world, writes Rebecca Thorpe, Communications Director at Australia’s Alliance for Gambling Reform, which released a new video, Without gambling, our lives are better, this week.

“For most of the latter part of the 20th century, gambling has been overlooked as a public health issue. Gambling harms are hidden and often complicated by associations with other health difficulties.

Unlike alcohol, there are few diseases to which the impact of gambling engagement can be unilaterally attributed. This has served to mask the health harms associated with gambling, and to shield gambling as a public health issue from the view of regulators, legislators, and public health specialists alike.” The Lancet Public Health Vol 6 January 2021

Gambling harm is a major contributor to poverty for many and has multiple public health intersections, especially in Australia. CQU research showed that the fallout from gambling harm costs $7 billion a year in Victoria alone (the only state for which such research has been conducted). That fallout includes family violence and homelessness, mental ill-health and even deaths by suicide.

In October 2020 Croakey addressed the lack of much-needed Australian attention on gambling harm via the first virtual CroakeyGO, which focused on the impacts gambling harm has on people, communities, and our health and social systems.

That focus was critical — Australians are notoriously the biggest gamblers in the world, losing more than $1300 per year, or 1.6 percent of average pre-tax earnings. That’s 20 per cent more lost than the next closest population in Hong Kong. New Zealanders lose less than half that Australians do gambling.

Australian research also estimates that harms from gambling are of a similar magnitude to major depressive disorder or moderate alcohol misuse or dependence. For years, mental ill-health and alcohol misuse have been on the political and social agendas, yet gambling harm is a comparative blip on the radar for most MPs.

That is different in the UK, where there are currently two All Party Parliamentary Groups (APPGs) related to gambling, and a Select Committee on the Social and Economic Impact of the Gambling Industry, which produced a report called Gambling Harm—Time for Action.

Much of the recent attention on gambling harm in the UK has been the result of actions taken by a group of people with lived experience of gambling harm, called Gambling with Lives. The Campaign for Fairer Gambling and Clean Up Gambling have also helped highlight the need for reform.

The people involved in these UK campaigns, along with Australia’s Alliance for Gambling Reform, are grateful that The Lancet Public Health Commission on Gambling was announced this month.

The Lancet Commission will be a “scientific inquiry and response to an urgent, neglected, understudied, and worsening public health predicament”. It will bring together world leaders in public health, mental health, policy, and gambling studies authors, and will be supported by an advisory group including people with lived experience of gambling harm, with the aim of considering the multitude of global gambling issues.

According to The Lancet:

“The Commission will focus on the political and corporate determinants of harm, the epidemiology of gambling harms, including examining inequalities, interventions to reduce harms, and critical appraisal of regulatory, political, and public health responses to gambling. The ultimate goal of the Commission is to set a progressive agenda to guide action to reduce population-level gambling harms, to protect people from these harms, and to provide evidence-based care when needed.”

Matt Zarb-Cousin, worked on the Campaign for Fairer Gambling and co-founded Clean Up Gambling in the UK. He welcomed the Lancet Commission.

“I started campaigning against Fixed Odds Betting Terminals (FOBTs) in 2012, two years into recovery from a four-year addiction that led me to thousands of pounds of debt, and a suicide attempt,” he said.

“I subsequently became active in politics and campaigning, which led me to working for the Campaign for Fairer Gambling. Over a period of six years we achieved the change in government policy on FOBTs we set out to, reducing the maximum stake from £100 a spin to £2.”

Matt said the Lancet Commission could lead to other such important improvements for those experiencing gambling harm.

“This Commission will help reframe the issue as one of public health, and that can influence the way in which gambling is regulated in different jurisdictions,” he said.

“Instead of a focus on ‘protecting the vulnerable’ or ’treating problem gamblers’, which locates the cause of harm on individuals, gambling regulation should be viewed through a public health lens that recognises anyone can experience harm as the products are addictive.”

Australian gambling reform advocate Anna Bardsley, who lost 10 years of her life to poker machines and was the MC for the CroakeyGO on gambling harm, agreed with Matt about the need to address the root of the issue — being the need for effective regulation of the gambling industry. She welcomed the inclusion of people with lived experience of gambling harm in the Commission’s work.

“The saying ‘nothing about us without us’ applies to us too — those of us who have lived through the pain and consequences of gambling harm, either as gamblers or the loved ones of gamblers who also experience gambling harm,” she said.

“I’m so tired of hearing ‘gamble responsibly’ as a tagline, as if that absolves the gambling industry of all its predatory behaviours, and places all the responsibility back with the individual. It’s plain wrong, and it’s time it stopped.

“When I learned all the dirty tricks the gambling industry uses to manipulate people, how they hire psychologists to design poker machines to have features that deliberately addict people, I was so angry. They exploit people with zero consideration for the consequences of their actions, with so many of those consequences being public health issues.

“I’m disappointed this Commission didn’t come out of Australia, given we experience the worst levels of gambling harm in the world, but it’s heartening to see what’s happening in the UK, and that this Commission is taking a global perspective, seeking submissions from around the world.”

James Grimes is a Senior Programme Manager for the UK’s Gambling with Lives, which was set up by the families and friends of young people who had taken their own lives as a direct result of gambling.

“I became involved in gambling reform following twelve years of gambling disorder that ruined most areas of my life,” he said. “A few months into my recovery I came across Gambling with Lives and with their support, I started to realise that the severe harm that happened to me wasn’t entirely my fault.

“I take full responsibility for my recovery, but the online gambling industry showed very little responsibility and failed me on so many occasions, like it is still doing today to many others. Reform has been quite specific for me, focusing on the marketing and subsequent normalisation of gambling in sport, which was unfortunately my introduction to gambling at 16 years old.”

James said he hoped the Lancet Commission would lead to further reform, at a quicker pace.

“Perhaps gambling addiction has left me with a brain that wants things done quickly, but the sedate nature of legislative change is frustrating,” he said.

“The 2005 Gambling Act is currently being reviewed and it’s likely that any meaningful changes won’t be until 2022 and it’s difficult to comprehend how many lives will be destroyed in that time.

“It’s quite infuriating that other stakeholders, such as sporting organisations promoting gambling, have the opportunity to adopt the precautionary principle ahead of new regulation, but instead continue with the status quo and are blindly complicit in the harm it causes.

“I have no bitterness towards the gambling industry, but it evidently cannot be left to self-regulate. I’ve not met one person harmed by gambling, or in gambling reform circles, that would favour a ban on online gambling.

“We are not anti-gambling and betting has a place in society, but a 24/7 unlimited casino in your pocket, pushed at us with predatory and subconscious dark marketing, is unsustainable for both the industry and its customers.”

The method for submissions to this Lancet Commission has not yet been announced. This article will be updated when they are.

If you or someone you know needs support in Australia please contact:

PrevPreviousThe health hazards of extreme heat and the legacy of racist policies
NextHow might media policy influence the health of diverse communities?Next