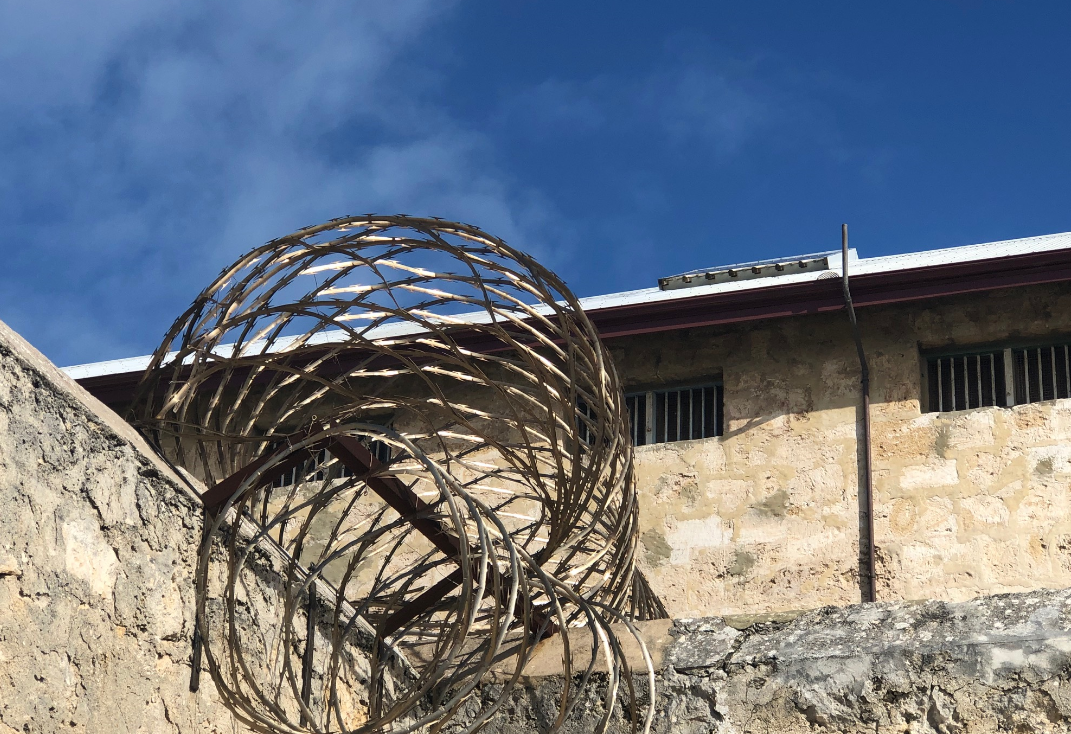 Over 1,000 Australians with cognitive disability are detained indefinitely each year. This shameful practice needs to stop

Is the justice system being used as a de facto disability service, one that proceeds by punitive rather than therapeutic measures?”

That was one of the questions posed by Senior Counsel Assisting Dr Kerri Mellifont at the opening day of two weeks of hearings by the Royal Commission into Violence, Abuse, Neglect and Exploitation of People with Disability into the experiences of people with cognitive disability in the criminal justice system.

The focus has been broadly welcomed, however the First Peoples Disability Network (FPDN) has said that the over-representation of First Nations People with cognitive disability in the criminal justice system – acknowledged by Commission Chair Ronald Sackville in his opening remarks – warrants its own dedicated First Nations hearing.

Aboriginal and Torres Strait Islander people with disability are 14 times more likely to be imprisoned with one third reporting a disability, 50 per cent reporting a history of psychosocial disability, and 25-30 per cent of prisoners having an intellectual disability, said FPDN CEO Damian Griffis in a statement.

“We know that over half of all Australian children imprisoned on any given night are Indigenous, and localised data indicates that nearly all have some form of cognitive impairment, and this needs to be investigated further,” Griffis said, calling for better data, immediate investment in disability advocacy supports (including First Nations disability advocates who specialise in justice matters) and a nationwide approach to an effective custody notification service with a focus on disability.

Criminology Professor Eileen Baldry, from UNSW, is among the expert witnesses to be called for this round of hearings. In an article originally published at The Conversation, she writes particularly about the impact of indefinite detention and urges an end to shocking and shameful punishments imposed upon people with cognitive disability, particularly Aboriginal and Torres Strait Islander people.

This week, the Royal commission into the violence, abuse and neglect of people with disability will begin holding hearings on a shameful subject that has long been neglected: the indefinite detention of people with cognitive impairments and/or mental illness in our criminal justice systems.

Indefinite detention is what happens to defendants in criminal cases when they are deemed unfit to stand trial.

In common law, this “unfitness test” is based on whether the accused has sufficient mental or intellectual capacity to understand the proceedings and make an adequate defence.

If a person is found unfit to plead, they can instead be detained in a prison or forensic unit for the purposes of treatment. This detention can be indefinite if the person is deemed to be a risk of harming themselves or others and is not seen to improve.

While every state and territory has indefinite detention, not every jurisdiction collects or publishes statistics on how many people are being held or for how long.

Australians for Disability Justice, an advocacy group, believes over 1,000 people with cognitive impairments and/or mental illness are indefinitely detained in Australia every year. According to the group, up to 30% of these people are Indigenous.

This is supported by research from UNSW, which shows Indigenous people are significantly over-represented among those with disability in Australian prisons. 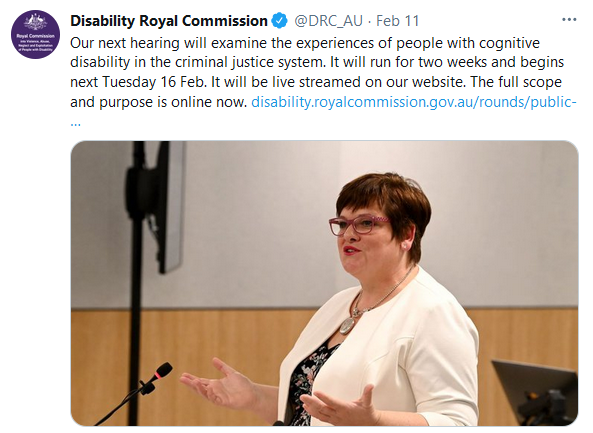 Federal, state and territory governments have been put on notice about this practice before.

In 2016, a Senate inquiry recommended significant reforms to the use of indefinite detention, especially when it came to those with cognitive impairments.

The report was particularly concerned about “the sometimes arbitrary nature of such detention”, particularly “in a criminal justice facility”.

The UN Committee for the Convention on the Rights of People with Disabilities (CRPD) has also formally asked Australia twice now to dismantle its indefinite detention regime. Scotland leads the world in doing away with the practice, and many European countries are following suit.

Read more: Here’s how we can stop putting Aboriginal people with disabilities in prison

Disability justice advocates have also long pushed for change in Australia. For example, the Tasmanian Law Reform Institute reviewed the law in that state and recommended significantly limiting the use of indefinite detention.

Most jurisdictions have a review tribunal process to determine whether people being held indefinitely can eventually be released with the help of medication or behaviour support. However, all reviews are based narrowly on the risk these people pose to themselves or the community, not on whether a person can live safely in the community with support.

Many people with mental health disorders also do not respond to medications or other therapies. And crucially, there is no “cure” for a person with cognitive impairment, such as an intellectual disability or acquired brain injury.

Another concern is that indefinite detention is often disproportionate to the offence alleged to have been committed.

For example, people can be held indefinitely for minor crimes, such as threatening behaviour. Those without disability who are convicted of a crime like this receive a sentence with a definite release date.

This means there are two different forms of justice being meted out in Australia — one for people with disability and another for those without disability. In other words, justice is not being served.

Read more: People with cognitive disability shouldn’t be in prison because they’re ‘unfit to plead’. There are alternatives

In one notable case, the UN CRDP found the Australian government violated the rights of an intellectually disabled Yamatji man, Marlon Noble, who was held for 10 years without being convicted of a crime.

The committee noted that Noble had no idea how long he would be held. It wrote

the whole judicial procedure focused on his mental capacity to stand trial without giving him any possibility to plead not guilty and test the evidence submitted against him. 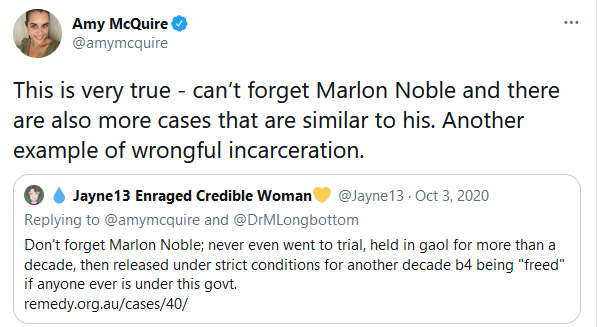 Time and again, the Australian Human Rights Commission has found that Indigenous people with cognitive disability have experienced cruel and unusual punishment in detention, such as being held in isolation and without disability support.

In 2016, the ABC featured the story of a young Arrente man who had been placed into a restraint chair and injected with tranquillisers up to 17 times by staff at the Alice Springs Correctional Centre.

Despite serious objections from his guardians, the young man remains indefinitely detained in the Northern Territory. His case, along with others, has been referred to the UN.

His family and guardians will also present evidence at the Royal Commission hearings, detailing his experience in indefinite detention.

Noble, the Arrente man and many others have experienced abuse and violence in their lives due to their disability, including during their time in detention. They, and thousands like them, have been subjected to forced medications and restraints even though these are clearly not therapeutic for people with cognitive disability.

It’s shameful this is happening in a country as affluent as Australia, which has ample capacity to care for people with disability, even those who require highly complex support.

Read more: Aboriginal people with disabilities get caught in a spiral of over-policing

What needs to change

In dismantling our indefinite detention system, the key is to provide more disability-focused support to those at risk of coming into contact with criminal justice systems.

Besides this, other reforms are also urgently needed:

It is inhumane to hold anyone with disability in indefinite detention in such an arbitrary manner. We hope that by sharing the stories of these people with the royal commission, this deplorable exercise will finally be put to an end.

Patrick McGee, national manager for policy, advocacy and research at the Australian Federation of Disability Organisations, contributed to this article.