This is the sixth in an irregular Croakey series about his experiences with cancer, in which he describes how the all-conquering “Cancer Boy” returned to work, and fell to earth.

At the bottom of this post you can link to his previous articles, describing his diagnosis, pre-surgery nerves, post-surgery encounters, the day he received some good news, and how he went a bit stir crazy during the post-surgery period.

A pain in the arse: A diary about living with cancer (part 6)

When I first found out I had bowel cancer, back in April, I disobeyed every piece of sensible advice I have ever read about reacting to a major health issue and I googled: “bowel cancer”.

There was a great deal of very scary stuff and even more stuff that I really didn’t understand. Like the pathology report I was to receive from my surgical registrar after going under the knife, it was written by an expert for other experts and not for the entry-level punter like yours truly.

Some of it – quite a lot really – was written by the man who did my surgery, which I found rather comforting; still do, as a matter of fact.

What the peer-reviewed material I read seemed to suggest was that there were certain sets of circumstances under which a fairly high percentage of people lived on for donkeys’ years after surgery (and certain sets where people didn’t live for very long, but these tended to be much smaller percentages of people and I convinced myself that this didn’t sound like my circumstances in any case).

After puzzling it all out for a while, I settled on a set of circumstances that came associated with the phrases: “90 per cent of people in this group” and “lived to a ripe old age”, decided that this appeared to fit with what I had been told about where the Gerbil had been found and how large it had grown and closed the browser.

But it made me think about the nature of medical research and medical treatment.

In a disquieteningly solipsistic way I’d like to think that all that research led to my doctors’ attempts to cure me, but actually the truth is that I am another set of ticked boxes in ongoing cancer research that will, hopefully, give some poor sod like me some comfort in the future when he or she reads that “96 per cent of those patients who reported with a stage 3 gerbil in their colon had it cut out and lived to be 100 (and wrote a best-selling novel)”.

And that’s all you get, an indication. It was like that when I first consulted my surgeon. I wanted him to say: “We give you radiation here, we give you chemotherapy there, we cut here, we throw this bit in the bin and you go off and write your novel”.

As it was, all he was able to say was: “Here are the possibilities, here are the risks. If you don’t do anything, you will die of this. If you get this treatment you’ll probably be cured, but you may risk these side effects… blah.”

And so it goes. After my operation I had a few weeks of victory dance, where I bestrode the earth like a conquering colossus: “CANCER BOY!! WATCH HIM GO!! NOTHING CAN STOP HIM NOW!!”

And then it all felt a bit deflating. All I get from my doctors (and all they can, in good conscience, say to me) is: “you’re probably cured”. And hey, I like “probably cured”, which is way better than: “you didn’t have anything planned for next week, did you?” or “at least you’ve seen England win the Ashes once before…”.

Hmmm. Probably cured. Why not: definitely cured? Why not: 100 per cent, cast-iron certainty, guaranteed, put-your-house-on-it cured? Now you know, and I know, they can’t tell you that. Rationally I know why they can’t say that. But that doesn’t mean I don’t want to hear it.

The period after surgery is often referred to as the “surgical let down period” and can be accompanied by feelings of deflation, which is where I’m at right now. Nothing serious, but while it would be terrific to report that I returned to the office with a smile on my lips and a song in my heart, the truth is I am finding the transition from sofa to desk profoundly challenging. After six weeks at home I thought I was ready to return to work, and mentally I was, but I’m finding it hard to get back into the “flow”.

Part of it is the slow pace of the recovery process. As I have mentioned, from the day after surgery I was CANCER BOY!! WATCH HIM GO!! etc, etc – and it seemed like nothing was too much of a challenge: walk round the ward? I’ll do it three times, whistling Santa Claus is Coming to Town, all the while (hospital habitués will recognise the symptoms: irritatus fellow-patientus).

The first couple of weeks at home are full of red-letter days. Back in the bosom of my wine cellar, for a start, and surrounded by media devices and books and music. Being able to share a bed with the gorgeous Maxine. Life doesn’t get much better than that.

And there’s the rub. It doesn’t get much better than that. I’ve been back at work for two weeks and have reverted to tracksuit pants, as suit trousers are still too sore and I remain quite swollen in the midriff. You don’t appreciate how tiring it is, returning to work after a long lay-off. And then there’s the bag.

I was on the phone to one of my colleagues interstate last week and she asked me how it was going and I made my best Pollyanna noises and she, being someone who knows a little about bowel cancer and the treatment of said disease, said: “And how’s the bag? Is the bag your friend yet?”

Somehow the humorous warmth in her tone implied she already knew I was going to reply: “I can’t get rid of this sodding bag soon enough, quite frankly.”

The soreness I can cop, the tiredness too – it’s the bag I’m finding a real struggle. I’m sure I speak for all my fellow members of the NSW Ileostomy Society (and its interstate and international branches) when I say that sometimes you do get a bit tired of answering polite inquiries as to how you are feeling with a cheery smile and a “pretty good, thanks”. Sometimes you want to snarl: “I’ll be better when I get the full use of my arse back, thanks very much…”

Now I am aware that you shouldn’t sweat the small stuff: there are thousands of people around the country whose relationship with cancer is much more serious than mine (my surgeon told me that after surgery I would feel as if I had been hit by a truck. Well, I don’t know about that, but in the course of my treatment I’ve certainly seen plenty of people who look, for all the world as if they have been hit by a truck – which has then reversed over them and had another go for good measure).

So apologies to anyone reading this who is thinking: “This bloke doesn’t know how lucky he is …” – because most days I do.

But for those of you who are, like me, in recovery and wishing, like me, that it would all happen a bit quicker – this is for you.

The sooner we can put it all back behind us, the better…

Part 1 of the series On having a large, malignant tumour in the rectum

Part 2 of the series Pre-surgery nerves

Part 3 of the series Jonty is back from surgery

Part 4 of the series Jonty has some good news 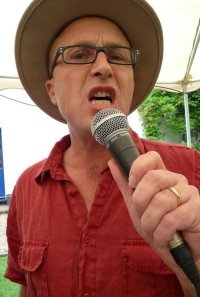 Inside lockdown: aged care residents and staff sound the alarm