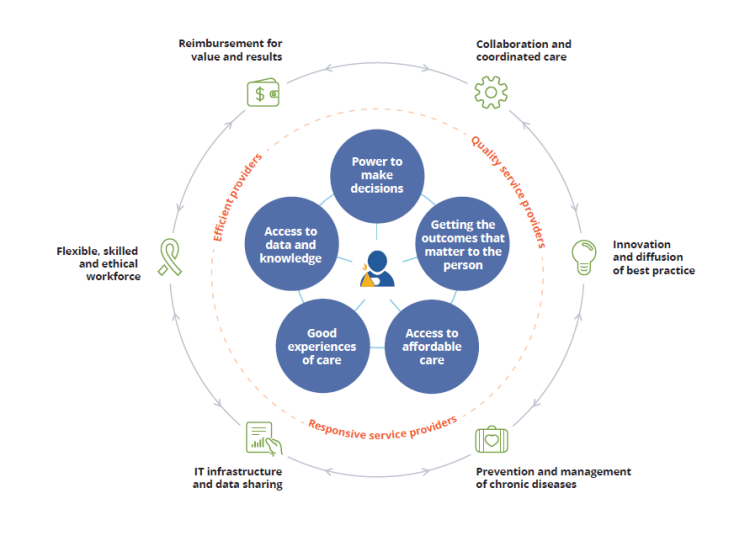 The ingredients of a well-functioning system, from, Shifting the dial 2017

Patient-centred care is missing in action in Australia

At the launch of The Productivity Commission’s Shifting the dial report in Canberra earlier this week, treasurer Scott Morrison borrowed the wording of US cardiologist and medical futurist, Professor Eric Topol, to explain patient-centred, integrated care.

The title of Topol’s book – ‘The patient will see you now,’ – Morrison said, encapsulates the core of the Commission’s recommendations for ‘making the patient the centre of care – improving the care of the patient through all parts of the health system and ensuring there is a “teamwork” approach to their care.’

It’s a concept that Leanne Wells, CEO of the Consumers Health Forum of Australia, roundly endorses, and one that she says the Australian health system has been struggling to master for decades.

In the post below she explains how it would benefit us all if the health system functioned in this way, and some of the steps we need to take to make it happen.

The success of modern medicine is popularly seen in terms of hospitals and life-saving surgery.  That focus obscures the potential of a different response to much of the ill health in contemporary society.

It’s patient-centred integrated health care. In a refreshing acknowledgement, the Treasurer, Scott Morrison, has strongly supported the value this model offers to the health system and the economy.

Such a system would ensure that patients with common and complicated conditions, like cardiovascular disease, receive everyday care that is organised around their needs, rather than shaped by the priorities of the health system and practitioners.

The patient-centred approach sounds straightforward, even prosaic, hardly the heroic life-saving surgery we associate with hospitals, yet the need for integrated care grows each year, along with the burgeoning levels of expenditure directed to our hospitals.

And as Mr Morrison said, a health system reboot including a boost to integrated patient-centred care could be worth up to $200 billion over 20 years.

The striking potential but unmet value of patient-centred and integrated care is detailed in the new Productivity Commission report, Shifting the Dial: 5 Year Productivity Review. The report indicates that, while Australia’s experience in integrated care is not extensive, it is sufficient to affirm international evidence that integrating GP and hospital services delivers better patient outcomes at lower cost.

An integrated system of patient-centred health care has been a policy objective in all Australian jurisdictions since a Council of Australian Governments agreement 22 years ago.  That ideal has had the backing of the Consumers Health Forum, the Royal Australasian College of Physicians and even the Business Council of Australia, which has identified it as a key microeconomic reform.

Yet our system is more fragmented than ever and we are still waiting for the vital elements required to change that – such as funding changes, a shake-up of Federal-State collaboration, and an effective, well embedded national system of electronic medical records to make a significant national impact on our health services.

The Commission finds that despite the widespread acceptance of the value of integrating hospital and primary care, Australia’s record has been poor, hampered by weak communication and coordination, inadequate attention to the experiences of patients (and of the merits of using those experiences to shape better services), and the deep flaws of Commonwealth-State divided health funding.

The report details details some of the effects of this divide. For instance, a Victorian program to reduce hospital admissions by better care coordination and support for patient complex and chronic care needs achieved a 41 per cent reduction in hospital use, but overall cost efficiencies were stymied by the lack of integration of GP and hospital services.

A simple illustration of Australia’s weak performance in integration is the low proportion of hospital patients whose GPs were always informed when their patient was seen in an emergency department: fewer than 20 per cent and well below the rate of such communications in comparable countries. It is little wonder that people experience disjointed care and misadventure when information we should all reasonably expect to be passed between care providers, is not.  It is little wonder that we have so many avoidable readmissions to hospital and unnecessary cost to an already pressure system when care is not being followed through at this most basic level.

Meantime the hospital bills continue to mount. The latest Australian Institute of Health and Welfare hospital expenditure figures show a big 45.5 per cent jump in hospital spending in the eight years to 2013 when the admitted patient cost rose to $45 billion.  Those are latest available figures but presumably the trend has continued recently. While rising costs of care were a significant factor, the big rise in patient numbers was the greatest contributor with increases registered across all age groups, particularly among the 65 and over age group.

Three national developments in recent years provide at least a potential platform for systemic development of patient-centred care. These are the 31 Primary Health Networks (PHNs) which have responsibility for commissioning regional health services; the Federal Government’s Health Care Homes program, which has just begun ten regional trials into a new payments system to remunerate general practices for the provision of team-based services to patients with chronic and complex conditions; and My Health Record, which has the potential to underpin a transformed system, simply by ensuring that an individual’s comprehensive healthcare information is available in one secure spot.

As well as requiring significantly more funding, these initiatives will need to bridge the Commonwealth-State funding and administrative gulf in order to work effectively.  Currently the active links between the Commonwealth-funded PHNs and State Government local health and hospital networks, where they exist, are in their infancy.  Truly integrated services can’t be driven from Canberra.  There is so much that could be realised by PHNs and hospital networks planning and working closely together to deliver joined-up regional healthcare.

The Productivity Commission has proposed new ways to structure funding in order to spur federal-state collaboration on measures aimed at enhancing services and population health.

If we are to get the most out of Australia’s potential in health care, it’s time for a stronger focus on individual patient-centred care needs.

But Australia’s health care remains weighted towards the interests of the providers.  Insufficient emphasis is given to encouraging patients to participate in their own care or to give much weight to patients’ experience in the system, even though these would contribute to a better health and fiscal outcome for patients and the system.

Communication lapses are common.  The report found that one in eight patients who saw three or more health professionals for the same condition reported lack of communication and this lack was worse for the less healthy. Waiting times are estimated to contribute nearly $1 billion in lost time for patients yet these are not remedied in a culture that concentrates on practitioners and ignores the invisible burdens falling on patients. Giving greater weight to patient experience would represent a major shift in orientation of the system, the Commission says.

It is not as if there is a lack of patient experience. More than 140 million GP Medicare services occur each year, yet there is little coherent Australia-wide information about patients’ experiences.

The Productivity Commission is not the first to call for a patient-centred overhaul of health.   The real game changer will be to shift money out of hospitals, invest in communities, and implement regional-level decision making about the services that best meet needs.  Only then will we have a true placed-based approach to people-centred care, and more responsive, relevant and cost-effective services.

*Leanne Wells is CEO of the Consumers Health Forum of Australia.