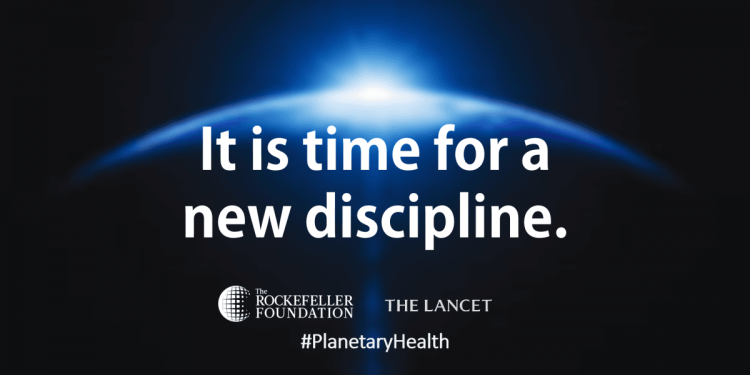 Planetary Health is a new concept which brings together a number of different areas of health and ecology to express the inter-dependency of all human and natural systems and the importance of ecological systems for human health and well-being. It is concept that is particularly relevant in understanding and responding to the health impacts of environmental degradation and climate change.

For those who are not yet familiar with this term, GP Peter Tait has provided the following brief explanation of the growing Planetary Health movement and outlined its potential to influence the development and implementation of health policies and programs. He also suggests the possibility of establishing an Australian Planetary Health network.

Emerging on to the public health stage in 2014, the concept Planetary Health provides an overarching meta-disciplinary model that brings together the disciplines of One Health (itself a transdisciplinary entity[1]) with Ecohealth, also a composite of ecological public health and human ecology, with an element of political economy and political ecology. This synthesis gives voice to the vital idea that human existence, civilisation and wellbeing (prosperity, health) is grounded in the environment of the planet on which we live.

What this means is that the relationships between humans, biosphere energy and nutrient cycles, the plants, animals, fungi and microbes with whom we share this planet, is made overt. Further, planetary health brings our relationship with future generations and their wellbeing into consideration.

The focus to those relationships is putting a biosensitivity and ecocentric frame into public health, which has two important effects on public health and health care systems. My purpose here is to tease these out for the non-public health community.

Firstly it opens a new discourse about the place of people in nature that counters the current dominant western post-enlightenment economic paradigm. Second it invites health practitioners to alter the way they think about public health and health care practice.

Environmental health was the origin of public health as a discipline and a movement. Therefore in this century it behoves public health to promote this determinant of existence, civilisation and wellbeing along with the more recently recognised social determinants of health. In fact planetary health recognises that environmental and social determinants of health are linked by the realisation that it is human politics that is the instrument whereby existence, civilisation and health are created and maintained (or not).

What this means for medicine, health care and public health is that practitioners need to adopt and promote a systems based, ecological approach to energy and materials use, to the application of technology, and to clinical practice. Antibiotic use and infectious disease treatment provides a topical example, as does the widespread use and dispersal through the ecosystem of biologically active chemicals. But deeper conversations about public health planning and responses, quality versus quantity of life, reframing primary prevention strategies and even the function and structure of health care systems emerge.

Within the health sector in Australia, a Planetary Health network is possible. Discussion about this possibility is currently underway. Such a network has potential to provide an Australian locus for this approach and link into a growing global Planetary Health movement.

Globally Harvard University, the Wildlife Conservation Society and the Rockefeller Foundation, with other partners, announced in early 2016 the launch of the Planetary Health Alliance, an effort to improve understanding of the complex relationships between environmental change and human health around the globe. This builds on the Lancet 2014 Planetary Health Manifesto followed by the Rockefeller – Lancet Commission report, Safeguarding human health in the Anthropocene epoch. Subsequently the Canadian Public Health Association released its report, Addressing the Ecological Determinants of Health: Global Change and Public Health, which includes an agenda for action for responding to, safeguarding and promoting planetary health.

“the achievement of the highest attainable standard of health, wellbeing, and equity worldwide through judicious attention to the human systems—political, economic, and social—that shape the future of humanity and the Earth’s natural systems that define the safe environmental limits within which humanity can flourish. Put simply, planetary health is the health of human civilisation and the state of the natural systems on which it depends”

In other words, Planetary Health is a public health prevention and health promotion activity, central to public health action, whose time has come. It links with promoting a wider biosensitive approach to human behaviour. It offers opportunity for human ecology to re-join public health in a movement to achieve human wellbeing.

Peter Tait has been a General Practitioner for 35 years, 30 in Aboriginal health in Central Australia. He was the 2007 RACGP GP of the Year. He achieved a Masters of Climate Change at ANU in 2010. He is an Adjunct Senior Lecturer at ANU Medical School.

Peter believes a person’s health is grounded in a healthy society, and a healthy society on a healthy ecosystem. He is on the Board of the Public Health Association Australia and active as convener of the PHAA Ecology and Environment Special Interest Group, and in the Climate and Health Alliance, Frank Fenner Foundation, the Canberra Alliance for participatory Democracy, and other environment and peace groups.

PrevPreviousNew report identifies pathways for success for Indigenous students in higher education
NextOutsourcing Medicare: Will a ‘tap and go’ approach lead to Medicare being tapped and gone?Next