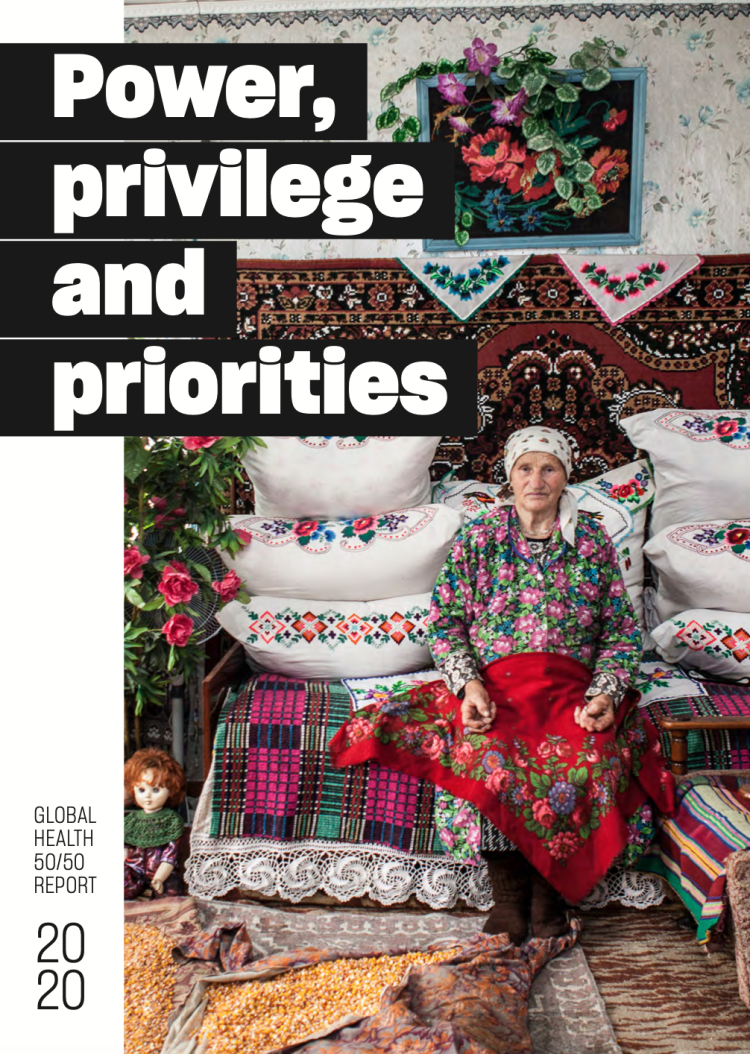 A new report demonstrates that the current global health system is failing to embrace gender diversity and respond to gender inequalities.

The Power, privilege and priorities: global health 50/50 report 2020 is a comprehensive review of the equality- and gender- related policies and practices of 200 global organisations active in health and health policy.

The 2020 report reviews the equality- and gender-related policies and practices of 200 global organisations active in health and health policy. It includes a comprehensive analysis on gender equality and the distribution of power and privilege in global health which aims to inform, inspire and incite action and accountability towards equality in the workplace and in global health policies and programmes.

The following is a summary of some of the main findings of the report.

Michelle Bachelet, United Nations High Commissioner for Human Rights and former President of Chile introduces the report by emphasising the harms of gender stereotypes and the links between gender equality and the Sustainable Development Goals (SDGs) committed to by all members of the United Nations.

“Inequalities in health deeply touch people’s ability to pursue their life aspirations and to realise their human rights. However, the right to health is not equally realised by all.

We can do better. Inequalities in health, and denials of human rights, can be a matter of life and death for women, girls and gender non-conforming individuals.

Harmful gender stereotypes continue to exist and directly influence people’s bodily autonomy, risks of ill health and early death. These gender norms also play a critical role in shaping health-seeking behaviours and determine who gets services and when and how they are provided.

Delivering on the right to health without discrimination will simply not be possible without addressing one of the fundamental demands of our era: gender equality.

Gender equality is no different from any other human right, and is a prerequisite for delivering on the transformative agenda of the Sustainable Development Goals (SDGs) and its promise to “leave no one behind.”

Respect for gender equality is a necessity and an obligation for everyone, everywhere, always. If we want to have fairness in our societies, inclusion, diversity and gender equality must be a driving force.”

Gender has a fundamental bearing on how power and privilege are distributed and maintained, and is a key determinant of everyone’s health and wellbeing.

Gender also acts as a gateway to revealing and understanding opportunity, expectations and achievements along a number of structural and social stratifiers, such as class, geography, ethnicity/race, age and (dis)ability.

The 2020 report urges actors and organisations to interrogate systems of power—global, national and local, interpersonal and institutional—and how they undermine an equitable and effective global health system.

It also urges an assessment of how social and political structures intersect with one another to drive vulnerability and ill-health among those with less power.

The report throws a spotlight on the entrenched power dynamics at play in global health. For example, more than 70% of leaders of the organisations studied are men, more than 80% are nationals of high-income countries and more than 90% were educated in high- income countries.

These findings pose some challenging questions: Is this a system that is fair and fit-for-purpose? How could more diverse leadership benefit the health and well-being of people around the world? 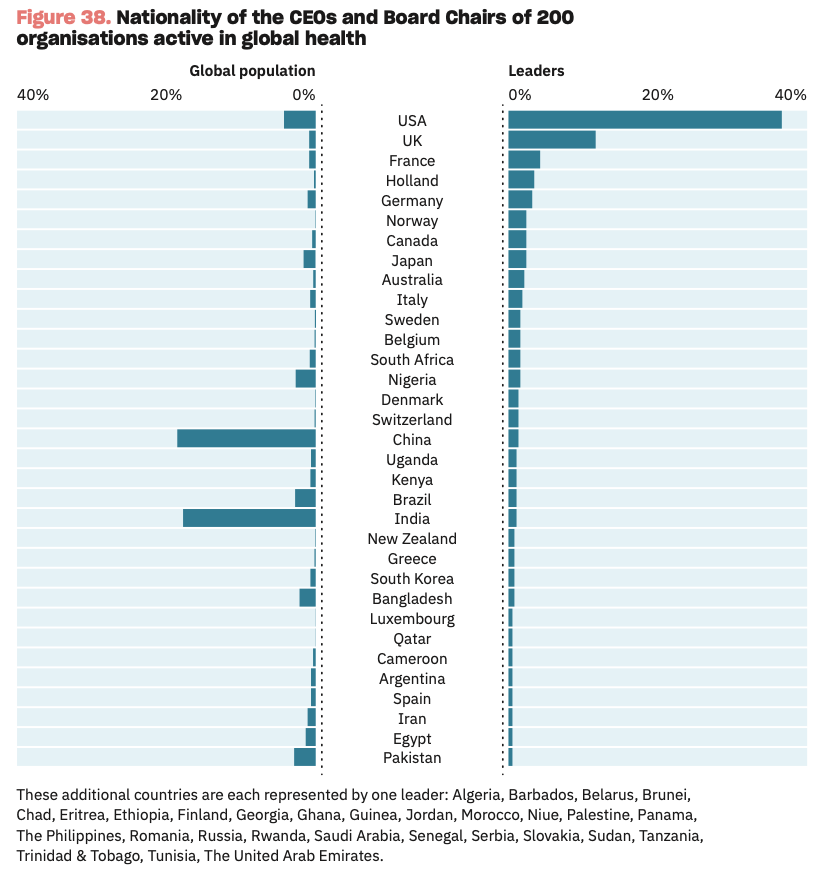 Encouragingly, the report provides evidence that a commitment to gender equality is on the rise among the global health organisations included in the report.

Defining gender is identified as an important step in improving health equity.

The analysis of data from the 200 organisations sampled shows that those organisations that define gender are also more likely to also be committed to addressing the underlying gendered determinants of ill-health i.e. tackling the inequalities in power and privilege that are associated with an increased risk of illness or lack of access to care.

Policies to tackle privilege and power imbalances in the workplace

The number of organisations with policies to advance gender equality in the workplace appears to be increasing. Organisational policies are equally likely to be in place irrespective of the geographical location of the headquarters or the gender of the CEO or board chair.

However, not enough policies are in the public domain and this lack of transparency diminishes people’s power to know, demand, benefit and hold organisations to account.

Organisations are more likely to have policies to promote gender equality than diversity/inclusion in the workplace.  Building a truly diverse workforce will require recognising the dynamic interconnectedness of gender with other social identities and stratifiers and understanding their role in privilege and disadvantage in the workplace.

The private not-for-profit sector leads on diversity and inclusion policies and Public Private Partnerships (PPPs) are the sector most likely to have board diversity policies.

Who holds power and enjoys privilege?

Workplace policies are among the building blocks for equitable career advancement. Who reaches the very highest levels of leadership within any organisation also reflects broader social factors, including legislative, educational and domestic.

For the first time, the report examines the individual characteristics of leadership beyond gender, including age, nationality and educational attainment. The available data have highlighted a number of areas for reflection and response in all organisations working in global health.

Gender equality in decision-making bodies is increasing at a snail’s pace.

While there is some indication of progress towards gender equality at the senior levels of management and governance, at the current rate of change it will take an unacceptable 54 years to reach gender parity in senior management.

At the very highest levels of leadership (board chair, CEO), progress towards parity has stalled. When women do make it to the top, they are more likely to be running smaller organisations with fewer than 50 employees.

For all organisations, the time has come for critical self-reflection of what more they could be doing to promote gender equality in career progression.

The time has come to consider more radical and progressive reforms to ensure that women have a fair chance at exercising power in and changing the values and norms of global health.

Leadership across the global health sector is mainly in the hands of older (> 45 years) men from high-income countries.

Global health headquarters (HQ) remain firmly rooted in high-income countries.  It is time for organisations in global health to look at the redistribution of headquarters functions outside of the global north, e.g. by transferring HQs to the global south, or dispensing with the notion and pursuing a partnership structure across different geographical settings.

Addressing the gendered power dynamics of inequalities in health outcomes

Like every other social construction, gender plays a key role in determining health and well-being across the lifecourse. Being fully ‘gender-transformative’ therefore requires that organisations recognise and address the root causes of gender-based health inequities, rather than simply focusing on the specific gender-related needs of certain groups in the population.

There has been a tendency within global health to equate gender to the needs of women and girls. This risks the perpetuation of the ideas that gender is a ‘problem’ associated only with women and girls, and that the gendered norms, behaviours and expectations of men and boys do not carry health-related consequences.

An intersectional lens highlights that power disparities among men along other axes, such as socioeconomic status, are equally important determinants of health inequities.

Fewer than one-third of organisations in our sample take a gender-transformative approach to their programming. Such approaches embedded in the work of global health organisations have been shown to yield more effective outcomes (the body of published evidence is focused on the health of women and girls). While programmes that are gender-sensitive or gender-specific are a step in the right direction, global health organisations should also be focusing their attention on the structures and norms that lie at the heart of gender inequalities and their impact on health outcomes.

When organisations state a population focus for their policies and programmes, it is predominantly on improving the health of women and girls.  Failure to recognise and address the role that gender plays in the health of everyone is likely to mean that no one’s health needs are fully met.

It means that women and girls will continue to be targeted by policies and programmes that respond to their sex-specific needs (e.g. associated with reproduction) but that fail to address underlying inequalities that drive poor health outcomes across other areas (e.g. their increased exposure to health-harming products).

It means that the global health system will remain generally silent on the role that gender plays in determining poor health outcomes among men and boys, despite the impact of widespread inequalities in the distribution of economic and political power on their well-being.

It is time for the global health system to recognise and address health risks rooted in long-standing social, economic and gender inequalities that impact on the health and well-being of everyone.

The global health agenda – which priorities and for whom?

Global health organisations wield power (financial, normative) at both global and national levels. Priorities set by these organisations about which health issues and which populations should be targeted have an impact on who benefits and which conditions receive adequate attention.

Measuring the distribution of ill-health within and across populations has been a core function of global health research and surveillance organisations for many years, and the global health sector benefits from having extensive and robust empirical evidence that can contribute to decisions around priority-setting.

Some health-related SDG targets get more attention than others, and some with high DALY burdens seem particularly neglected (e.g. NCDs and environmental health). Analysis of the distribution of the burden of disease and corresponding organisational focus across different SDG targets is not intended to pit targets against each other, but, rather, to highlight gaps in attention and funding.

The analysis in the report shows that the global health sector is stuck in the Millennium Development Goals (MDG) era, failing, for example, to adequately address the rising burden of NCDs. While it is important that the unfinished MDG agenda is addressed, a full five years into the fifteen-year SDG agenda, it is vital that global health organisations ramp up action on the new SDG elements.

PrevPreviousOn #COVID19, how are Australia and the rest of the world shaping up?
NextCancelling conferences and other events? Ask us about organising a Twitter festival insteadNext