While the controversial topic of euthanasia chews up the headlines and airtime, far less attention is paid to the important role of professional and community networks in caring for people at the end of their lives.

The need for better support for those providing end of life care to people at home is one of the findings of a recent report, Working Together – Apart?, which arises out of a series of indepth conversations with 88 End of Life practitioners across NSW and ACT.

The report comes from The Caring at End of Life Research Project, which is being conducted by researchers from the University of Western Sydney, Cancer Council NSW, Australian Catholic University, CSIRO and Cavalry Centre for Palliative Care Research ACT.

In the article below, Associate Professor Debbie Horsfall and Kerrie Noonan, from the School of Social Sciences and Psychology at the University of Western Sydney, report on their findings.

Our new report highlights the necessity and benefits of caring networks (friends, family, neighbors and work colleagues) for people dying at home; in fact, most service providers stated that without the caring networks of family and friends dying at home would be just about impossible.

Despite this, we found that few service providers are able to actively support these networks, or help the primary carers mobilise or maintain them because of lack of resources and a service provision orientation which fails to recognise communities of care.

So we were pleased to see palliative care back in the spotlight with the release of the Australian Senate report on ‘Palliative Care Services in Australia’ and the recent announcement of the NSW Government plan for increasing access to palliative care services.

It appears that place of death and the idea of home death is beginning to be seriously discussed.

Place of death is an issue highlighted in both reports largely because of the disparity between where people would prefer to die and where they actually do die.

Despite overwhelming evidence that the majority of people would prefer to die at home, only approximately 15% of Australians with a terminal-illness do so.

Most Australians die in hospitals or in acute health settings with an estimated cost of $7000 a day. Why is this so?

One explanation highlight in the report was articulated here:

“With the strong “medicalisation” of palliative care in Australia, the concept of holistic and person centred end-of-life care has at times been compromised and people’s right to choice in place of care and type of care thereby discounted. This fact I would suggest, is in part represented in the low statistics of home deaths in Australia” (excerpt from Senate Community Affairs Committee report into Palliative Care in Australia from Anam Cara House in Victoria, pg.110).

That most people do not experience dying and/or death in places of their choosing is an astonishing fact. It is a fact that speaks to our failings as a society at a time of life that occurs for each and every one of us.

Where a person dies is, of course, a complex issue and depends on many factors including type of disease, the regional services available, and access to family and community support.

It is this family and community support that we are particularly interested in. It was gratifying to see it mentioned, but we are somewhat disappointed that more attention is not being paid to this in terms of recommendations, especially as it is becoming common knowledge that support of family and friends is vital.

Recently commentators such as Adele Horin have articulated that our health services can do more to support the dying to achieve a death at home:

What would it take to have a good death at home? Here is a list of the basics: at least two family members (usually daughters) able and willing to put in the hard yards of caring, visits twice a day if needed from a specialist nurse, a GP who will visit the home, a phone number to call for overnight and weekend medical emergencies, a hospital-quality bed to ease the strain on carers, and advice from an occupational therapist about equipment. It’s useful to have access to a social worker to help deal with unfinished family business, fear and grief and, if required, a volunteer helper to give carers a break. Such Rolls-Royce palliative care exists in some parts of the country. And, where it does exist, it makes the good death a possibility. (SMH, July 28)

While this list of basics may be the “Rolls-Royce” of palliative care it is not “rocket science”, according to one of our participants! How hard can it be for our health services to provide this?

In 2009 we began a qualitative research project aimed at developing a greater understanding of what it takes to enable end of life caring and death in the home, from carers perspectives (Horsfall, Noonan & Leonard, 2010).

We took an asset based approach, guided by social capital theory and creative approaches to doing in-depth research. Social capital is often described as the “glue” that holds society together. Communities high in social capital, for example, report they can rely on their neighbours for support when they need it. Ideas about social capital have long been applied to communities facing stressful situations like poverty and disadvantage, but only recently been applied to caring.

We asked what is already happening, what works, who is doing the caring and what are they doing. We invited family carers and their caring networks to come together to discuss caring activities and map their connections to each other pre and post caring.

What did we find?

Well you can read the whole report online, but one of the most compelling results was that people can and do die at home and they do it well IF they are supported adequately by a caring network.

Caring with friends and family in the intimate end of life period was a transformational experience for everyone involved. It brought people together, people developed useful hands on caring skills and competencies and it created a vibrant and growing sense of community and belonging. It was still stressful, emotional and difficult work, but it was also a time of love and joy and an overwhelming feeling of being privileged and honoured to be involved in such care.

At the same time, service providers and carers told us repeatedly that it is important to make sure caregivers have access to sustainable resources that enable them to care.

Carers, we found, needed permission and practical hands on help to gather caring networks together and to negotiate the type of help they need.  Our hope is that health services, particularly palliative care services take on an active role in this, thus ensuring that carers do not burn out and that people get their wish to die at home.

It does seem that there is still a long way to go. For example, during the senate inquiry, a carer said:

Gary and I are so grateful for the palliative care in Ballarat because it gives you options that normally you would not even be told about. Like I said, on the second time around at the Royal Melbourne they were sending us home and I said to the surgeon, ‘This is incurable, isn’t it?’ He said, ‘Yes.’ I said, ‘All right. So why am I going home to have treatment?’ He looked at me and said, ‘What do you mean?’ I said, ‘You’re not going to cure me, are you?’ He said, ‘We can’t cure you.’ I said, ‘I know that, so why am I going home to go through all these loops? Get me in touch with palliative care.’ He said, ‘Oh, you don’t have to be macabre! There’s no need for that. Go home. Have the treatment. Don’t mention that ‘p’ word here. We haven’t given up the fight.’ (p.4)

In our research we heard similar stories from carers including this compelling moment when a woman turned to her friends and said “You were absolutely…totally determined that he was going to get the best possible and whatever it took you were going to see it through and you were not going to be bullied by any doctor or system or anybody who said something wasn’t possible”(Bringing our dying home report, P.41)

While it is encouraging that these stories are being heard by committees and reported in inquiries and research reports, it remains to be seen if resources and a re-orientation of the health system will follow.

It also encouraging that access to palliative care services will be easier for people; however we also need to make sure that people are receiving the right service, at the right time in the right way.

Our research suggests that part of this ‘right service’ is working with lay carers and their support networks, not just individual clients. Carers and family caregivers shared stories about having to work hard to get accurate and honest information from specialists. They had to work hard to get the medical and palliative care they needed.

And they had work hard to insist on their right to die in their own home, or the home of a family member.

And they made clear that they could not have done this work without the unpaid work of their support networks –friends, family, and neighbors. Surely it’s hard enough to be dying or caring for a dying person you love, without the system making it harder?

Clearly the evidence is out there. People want to die at home. A few do so. We need to understand how they do this, who cares, how and in what ways and we need to make sure our services provide the support and help they need.

For those at the coalface of palliative and end of life care, whether they be health professionals or family carers, the spotlight rarely settles on every-day stories of in-home caring for very long.

The euthanasia debate, while controversial, will at best only ever be an option for a very small group of people dying (less than 3%), yet this discussion dominates our media and mainstream conversations about where and how we want to die.

It is time that the caring happening in homes everyday across Australia took the spotlight.

Through highlighting these stories and by developing partnerships and interrelationships between service providers, carers and caring communities more Australians will be able to die in their place of choice and at least have the possibility of a good death. 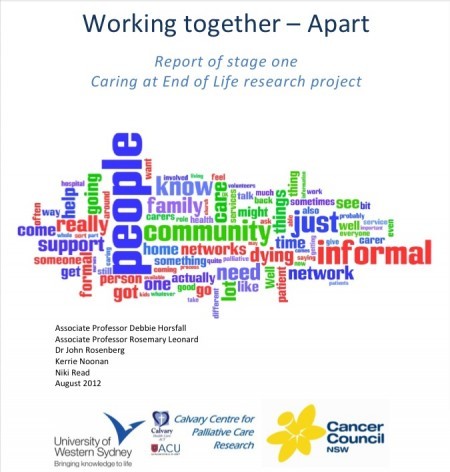 PrevPreviousWill Medicare Locals bring a new dawn or a dark night for Indigenous health?
NextReporting on a recent summit on blogging, social media and diabetesNext