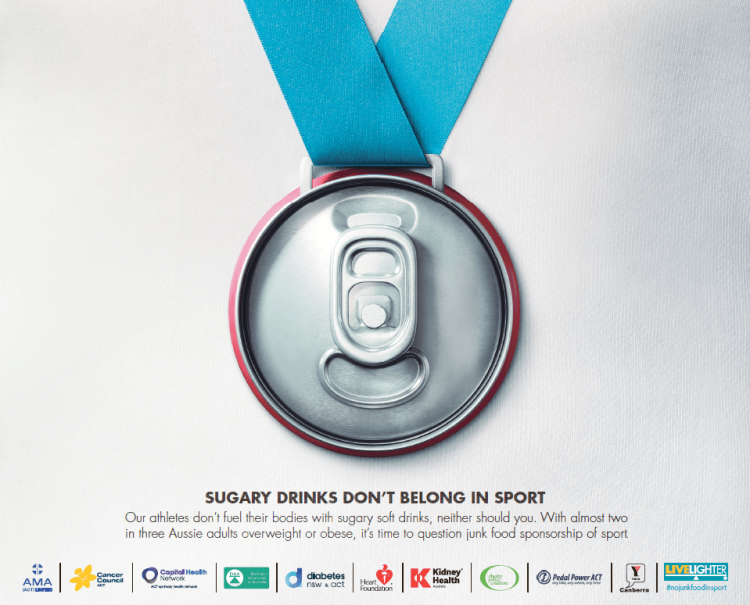 It’s the glorious spectacle and power of the Olympics: the chance to witness elite athletes from around the world performing in peak physical condition.

But how healthy are the Games, for those of us who watch them, the cities that host them, and – well – the planet?

They’re some of the questions that were raised last week at Croakey’s @wepublichealth Twitter account by Melissa Stoneham (@DrMelStoneham), who is Deputy Director of the Public Health Advocacy Institute of WA.

Featuring some fabulous photos of her own recent trip to Rio, Stoneham looked at different perspectives of the 2016 Olympics, from unhealthy sponsorship, to how the Olympics motivate people to become active and to the effects the Olympics are having on the local people, particularly those living in favelas.

See below for some of her tweet conversations, some of the issues and articles she linked to, the concerns of others, and an Australian campaign that is trying to highlight the wider problems of junk food marketing around sports events – from the Olympics to the Little Athletics.

In 2012, the London Olympics opening ceremony paid tribute to Britain’s National Health Service. This year’s spectacular ceremony in Rio put the focus on planetary health, issuing a graphic warning on global warming for coastal cities around the world and breaking with tradition to feature the Olympic rings all in green – though the messages were perhaps a bit mixed:

It prompted the inevitable complaints about mixing politics with sport, but a study published last week in The Lancet made the connection very clear, warning that rising heat and humidity due to climate change may put the summer Olympics in jeopardy. The authors ask:

If the world’s most elite athletes need to be protected from climate change, what about the rest of us?

This article also details some of the impacts that extreme heat is already having on elite sports.

Public health campaigners have criticised organisers of the Rio Olympics for allowing sponsors, including Coca-Cola, Kellogg’s and McDonald’s, to use the Games as an opportunity to promote unhealthy food and drink.

The international Children’s Food Campaign, funded by the British Heart Foundation, warned that the Olympics are “a carnival of junk food marketing“. It said:

“And we are seeing it again this time, with almost all Kellogg’s Games-related marketing currently promoting high-sugar, less healthy products; with Coca-Cola’s global #thatsgold ad giving twice as much screen time to red, full-sugar Coke as to Coke Life and Coke Zero Sugar combined; and with the emergence of limited edition Brazilian flag-coloured M&M’s and other sugary products which associate themselves with the Games.”

See the campaign’s response, and that of other public health bodies, to comments by the director general of the Food and Drink Federation (FDF), Ian Wright, that junk food marketing, and, specifically that associated with the Olympics, is a purely “Western and metropolitan” concern, and that “Asian and Latin American countries have no problem” with it.

“Child obesity is rising rapidly in developing economies and the last thing the children need are inducements to consume more junk food. The Olympic Games should be a beacon of human progress and ability, not a place where poor nutrition is given a halo of gold.”

As this Newsweek article observes, nutritionists have long called for alternative ways to fund the Olympics, which has a history of being sponsored by global food and beverage corporations. It’s a concern shared by LiveLighter, the Australian public education campaign targeting obesity, that has launched an Olympic campaign (see the feature image above) to question the sponsorship of elite sport by junk food companies.

LiveLighter points to studies showing that endorsement of a product by an athlete increases sales, particularly to children. It says:

“Junk food and sugary drinks should not sponsor sport. It is a conflicting message to the public, celebrating healthy athletes on one hand, then being bombarded by junk food marketing on the other.”

There is little room in the plan for heavily marketed junk food, which makes the junk food and drink sponsors of elite sport and some athletes a slightly odd fit.”

High rates of overweight and obesity are cause for concern, and junk food sponsorship of elite sport normalises its consumption.

Those who wonder how it’s so hard to act on junk food marketing didn’t need to look far for an answer, with this comment on Twitter from Terry Barnes, an advisor to Tony Abbott when he was Health Minister.

But do the Olympics at least get us all moving more? Canadian researchers recently asked whether world-class Olympians inspire fans and everyday people to get more active. According to CBC News, the opposite is true: winning more Olympic medals strongly correlates with a rise in obesity rates, at least in Canada. And Reuters reported in 2014 that a study of the 2000 Olympics in Sydney found that neither total leisure time physical activity nor number of activity outings per week changed substantially in response to the Games.

Though the Better Health Channel is trying. It has put together an Olympics inspiration guide, urging:

This year, don’t just watch the Olympics – be inspired by them. Take up a new sport. Get off the couch and get active. Make healthier food choices.

It comes as the Australian Burden of Disease Study: impact and causes of illness and death in Australia 2011- summary report, released recently by the Australian Institute of Health and Welfare (AIHW), shows a least 31 per cent of the burden of disease is preventable if risk factors such as diet, tobacco use, alcohol use and physical inactivity were addressed.

In response the Public Health Association of Australia said:

“There is an urgent need to address Australia’s diet to curb preventable disease. PHAA has been pushing for strategies to protect public health by improving diet: Australia needs a sugar tax on soft drink with the income generated from the levy invested in public health initiatives promoting healthy foods for disadvantaged groups; to provide additional support for the Health Star Rating system on packaged foods; and to coordinate this with a comprehensive National Food and Nutrition Policy.

As Melissa Stoneham pointed out at @wepublichealth, it’s not just the bombardment of advertising, it’s the soft marketing of junk food in media coverage of the Games, like this article on athletes’ diets which quotes an Australian swimmer as saying one of the biggest highlights of living in the Olympic village is “getting unlimited McDonald’s”.

‘It’s not uncommon to see a large majority of the swimmers from around the world in the dining hall pounding the free McDonald’s at 4am,’ Schlanger told The Courier Mail.

By the time the next Olympics come around, perhaps the IOC will have taken a more responsible approach to promotion of its wonderful product, and will consign all association of sporting success with alcohol and junk food to the promotional graveyard where tobacco sponsorship now resides. 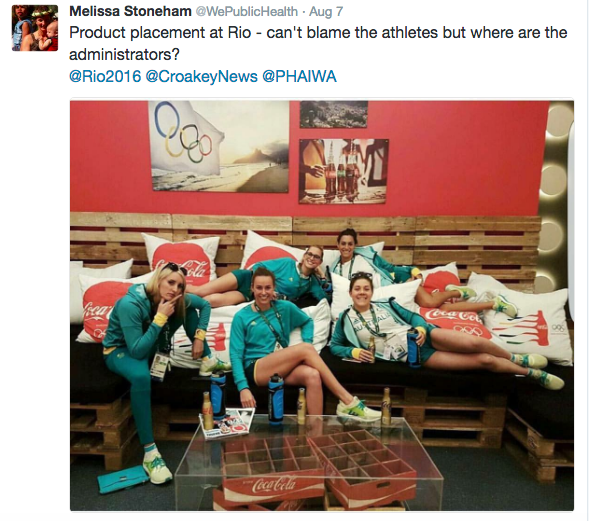 The reality for Rio

At least the catering country contracted to the Olympic Village – and 11,000 competitors – is doing its bit to address significant poverty in Rio by providing meals for the hungry.

According to Reuters, chefs David Hertz from Brazil and Italian Massimo Bottura, aided by more than 40 colleagues from around the world, aim to turn surplus food from the village in Rio de Janeiro into some 5,000 nutritious meals per day for those in need.

Hertz said he would like to see the initiative replicated in every city hosting the Olympics in future. He hopes it will become a movement not only to fight food waste and feed the hungry, but also to provide vocational training for future cooks, bakers and waiters. “After the Olympics and the Paralympics, this place will continue as a social business,” he said.

The initiative underlines the many social and political issues that lay behind the scenes in Rio.

They include concerns being raised by Amnesty International around the increased risk of human rights violations in the context of Rio 2016 Olympics, particularly around police brutality, as it says happened before in the Brazilian city in other mega sporting events such as the 2014 World Cup and the 2007 Panamerican Games. Amnesty Brazil says:

Croakey readers also might be interested to read this Inside Story article by Jane Goodall, which welcomes the leaner opening ceremony in Rio and hope it fits with moves by the International Olympics Commission to invite future candidate cities to present a project that “fits their sporting, economic, social and environmental long-term planning needs”.

But she concludes, in part:

Fiercer critics of the IOC might be happier to see the whole thing packed up. After all the corruption, the scandals, the wanton extravagance and the wilful delusions, can we really say that the benefits of the modern Olympics outweigh the costs?

See also this 2012 article by Sarah Joseph, Director of the Castan Centre for Human Rights Law at Monash University that looks at human rights and the Olympics, asking: “Games of freedom or oppression?”

As well as featuring a powerful acknowledgement of Brazil’s Indigenous people, Rio’s opening ceremony explored the shocking scale of slavery in the country’s history. As this New York Times points out, Brazil received about 4.9 million slaves through the Atlantic trade, compared with mainland North America’s importation of 389,000, according to the Trans-Atlantic Slave Trade Database.

Some broadcasters outdid themselves with sexist commentary, with many reports of outstanding performances by women focusing on them as “wives and moms“. This article shows what it would look like if we reported on men in the same way. It begins gloriously:

Nicole Johnson must be beside herself today as her arm-candy and baby daddy Michael Phelps scoops his 25th medal!

The strapping Olympian, a fiancé and father-of-one, has outdone all expectations, nabbing three gold medals so far in Rio for his efforts in swimming.

The 31-year-old shows he’s not past it yet and stole the show at yesterday’s events in Rio wearing skintight blue swim trunks as he sped into first place. His black swim cap accentuated his statuesque features, while he completed the look with stylish but functional wrap-around goggles.

You can check their progress here.

And closer to home: What will happen to Rio’s multi-million dollar Olympic venues once the last national anthem’s been sung?

Some videos to watch

A stunning new look at how carbon dioxide in the atmosphere travels around the globe. #OpeningCeremonyhttps://t.co/5r6mVbYyrg 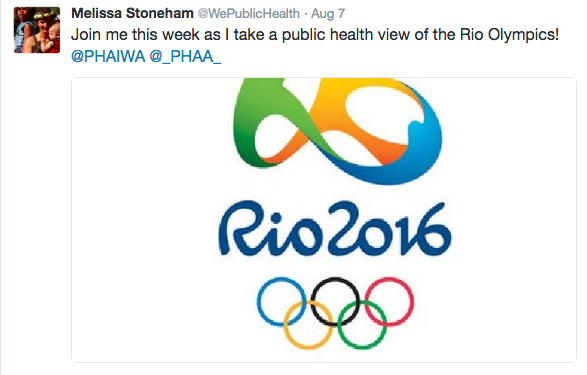 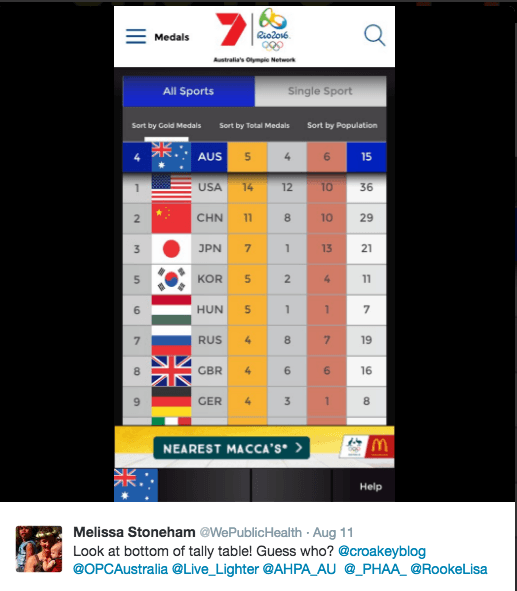 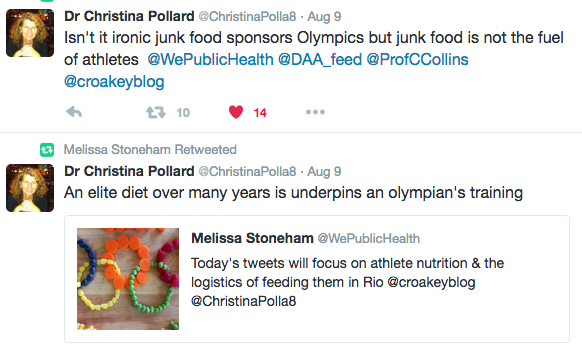 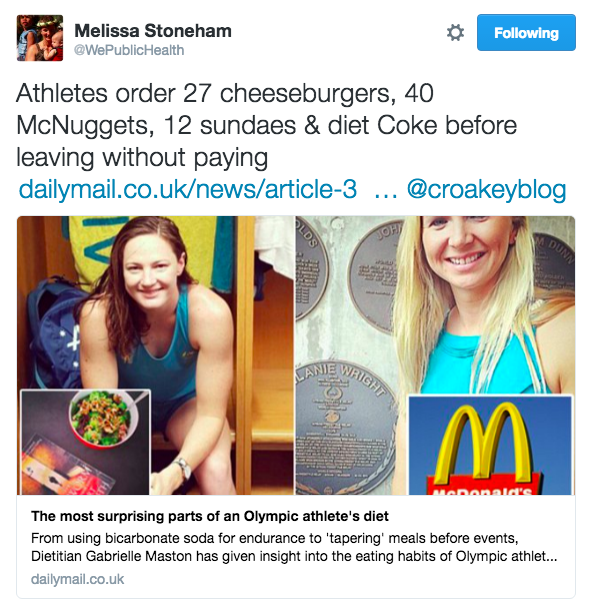 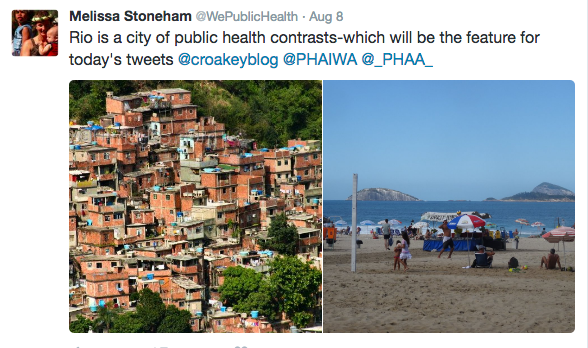 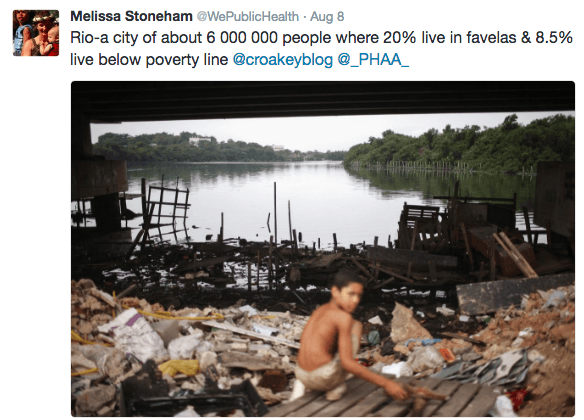 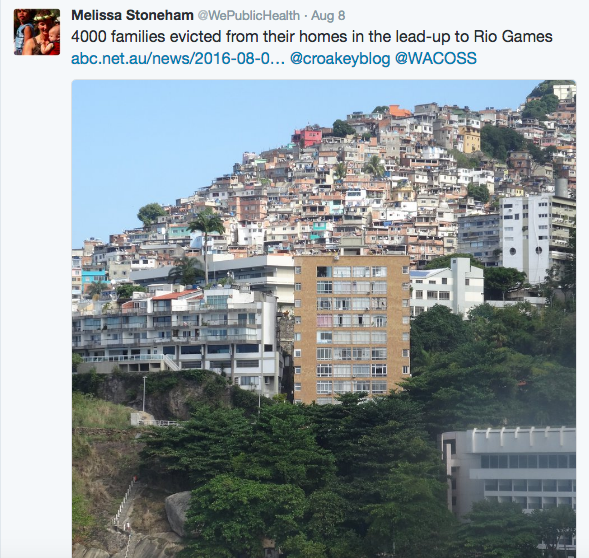 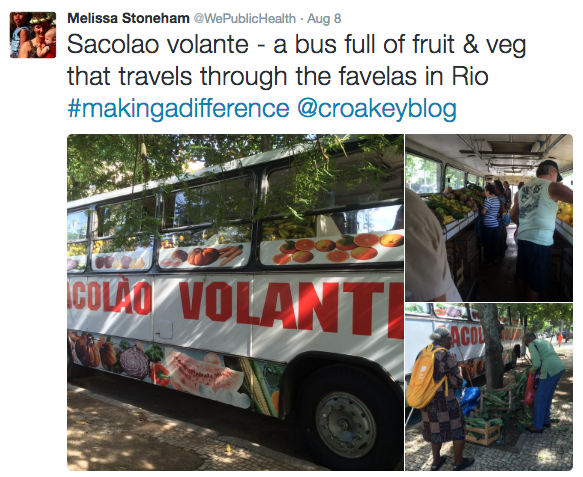 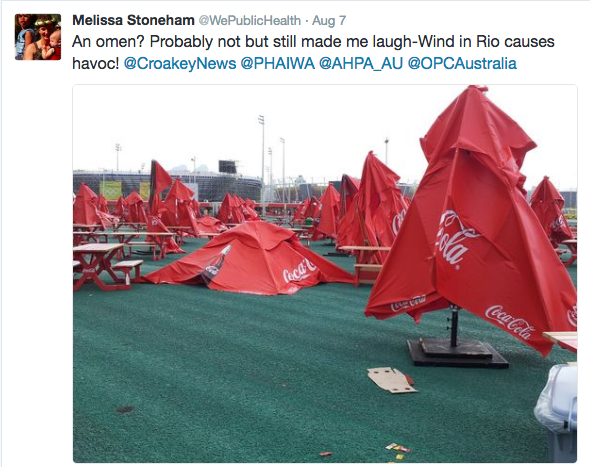 And if the federal election didn’t convince you, then …. 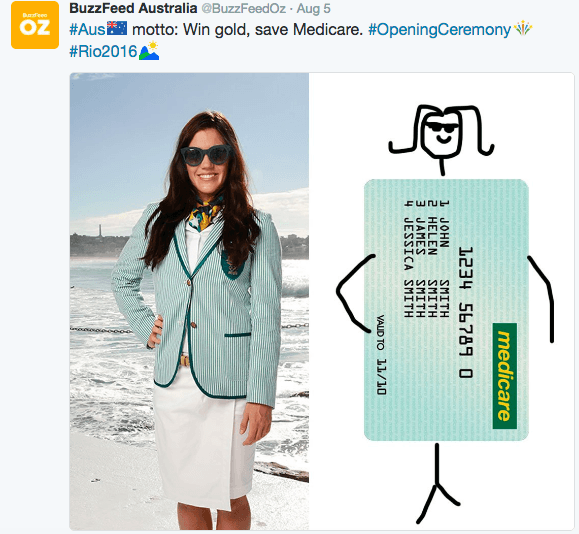 PrevPreviousCall for Royal Commission into child sexual abuse to extend its inquiry to Nauru
NextCroakeyEXPLORE: a solo walk through Perigord NoirNext