When community sport becomes a political football, it’s time to change the game

Introduction by Croakey: Professor Brendan Murphy, currently the Australian Government’s Chief Medical Officer, will be the new Secretary of the Department of Health, following the retirement of Glenys Beauchamp.

Beauchamp will go on leave from 24 January (this Friday) ahead of her retirement at the end of February, ending a long career in the Australian Public Service.

Neither the Prime Minister nor the Health Minister mentioned Beauchamp’s position as a board member of Sport Australia in their statements describing her achievements, although this has since been raised in media reports and other commentary on the sports rort scandal uncovered by an Australian National Audit Office investigation.

It found that the Community Sport Infrastructure Grant Program, administered by Sport Australia and meant to enable greater community participation in sport and physical activity, directed funds towards marginal electorates held by the Coalition as well as other electorates that were ‘targeted’ by the Coalition at the 2019 Federal election.

“Applications from projects located in those electorates were more successful in being awarded funding than if funding was allocated on the basis of merit assessed against the published program guidelines,” the audit found.

A Canberra Times report said Beauchamp attended all seven Sport Australia board meetings in 2018-19, which included the period when the grant applications were considered by the board.

The article cited a spokesman for Prime Minister Scott Morrison saying there was no link between Beauchamp’s departure and her position on the Sport Australia board, and that the timing of her retirement was “completely coincidental”.

Meanwhile, Health Minister Greg Hunt has come under scrutiny for his role in the sports rorts affair, after evidence emerged of him lobbying for funds for a yacht club in his electorate. 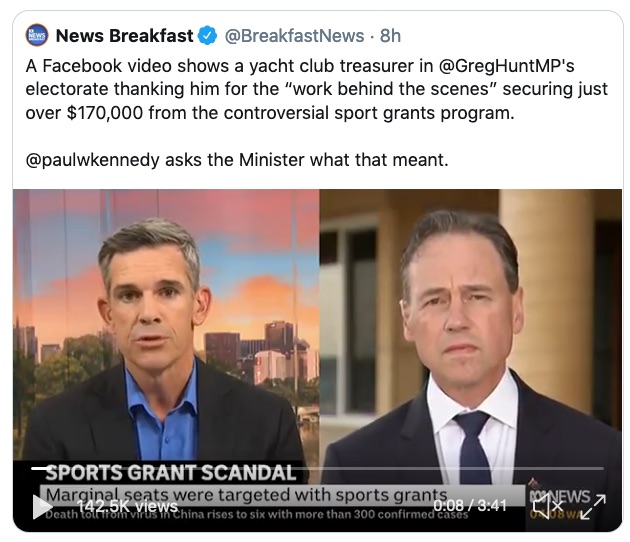 Perhaps the new Departmental secretary might like to commission a briefing on why needs-based allocation of such grants matters for public health and health equity, as explained below by Bill Bellew, Professorial Fellow with the Prevention Research Collaboration in the Sydney School of Public Health/Charles Perkins Centre at the University of Sydney.

Within days the ‘sports rorts’ incident involved Prime Minister Scott Morrison and soon after that the Attorney General Christian Porter, and most recently the Health Minister Greg Hunt.

This game of political football is still very much in play as I write with every possibility of going into ‘injury time’ as the next sitting time for the House of Representatives and the Senate draw near.

Some commentators are of the view that former Sports Minister McKenzie’s handling of the infrastructure program was a ‘red card offence’ – in other words, she should have resigned or been dismissed by the PM.

Anne Twomey, Professor of Constitutional Law at the University of Sydney, has identified three areas where Senator McKenzie may have broken the rules in her role as Sports Minister.

Firstly, the Minister must act within the scope of her powers and ensure procedural fairness in her conduct (as opposed to targeting marginal seats and ignoring merit-based assessment).

Secondly, the Minister must act in accordance with the relevant legislation governing the Australian Sports Commission (including Sport Australia) – namely the Australian Sports Commission Act 1989 (Compilation No. 18); the Minister had no power under the statute to make the grants and in doing so she was undertaking invalid expenditure of public money (‘an extremely serious matter’ according to Twomey).

Thirdly, there is no ‘head of power’ with respect to ‘sport’ in the Constitution and providing grants to local sporting groups is ‘a matter for the states and local government’.

In Australia at Federal level, these games of political football have always been conducted without an official referee.

The April 2019 Australia Institute report on a nationally representative survey of 1,536 Australians is instructive here: 80 percent of Australians support a Federal Integrity Commission with strong powers (only six percent oppose); 76 percent agree that were there to be a Commonwealth Integrity Commission, it should have the ability to hold public hearings, and 81 percent agree it should be able to receive and act on whistle-blower complaints.

Like the majority of Australians, I would welcome a Federal Integrity Commission with strong powers. I would certainly like to see compliance with their scope of powers and procedural fairness in the way all ministers conduct themselves.

I would also like to see current minister Senator Richard Colbeck (Minister for Aged Care and Senior Australians as well as Minister for Youth and Sport) deliver strategic fairness across the sport and physical activity domain.

The Minister could start by ensuring that Australia lives up to its commitment as a member state of the World Health Organization to address physical inactivity in line with the Global Action Plan on Physical Activity (GAPPA) – More active people for a healthier world.

Fund those most in need

The Minister could ensure resourcing according to the GAPPA principle of proportional universality, by directing the greatest efforts for increasing levels of physical activity to the least active populations.

The need for a fully funded Australian National Physical Activity Strategy, catering for the needs of the least active Australians has never been clearer nor more urgent, as recently outlined by experts.

Departing from a needs-based approach undermines fairness and compromises the delivery of intended outcomes.

For example, AusPlay data show that children’s participation rate in organised sport is 84 percent for high income families but only 58 percent among low income families.

Whether Senator Bridget McKenzie is sent off in injury time after the replay footage has been reviewed by video assistant referee (VAR) Christian Porter remains to be seen. Whether a Federal Integrity Commission with ‘strong powers’ is configured is also for the future.

More immediately, as the Australian Government considers how it will go about physical activity in the context of the National Preventive Health Strategy, there is an opportunity for Senator Colbeck to ensure not only procedural fairness but also strategic fairness in the way a National Physical Activity Plan is designed, funded, implemented and evaluated.

Now that would be a game changer.

• Bill Bellew is Professorial Fellow with the Prevention Research Collaboration in the Sydney School of Public Health/Charles Perkins Centre at the University of Sydney. Follow on Twitter: @billbellew 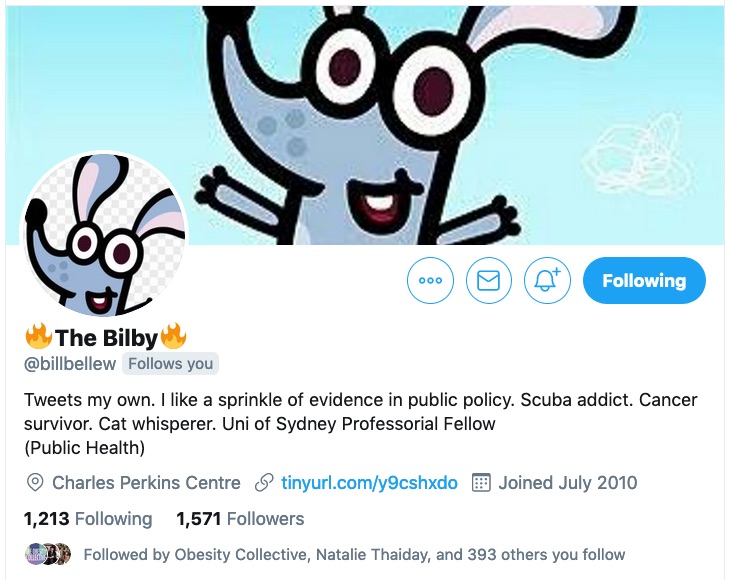 PrevPreviousTackling overtreatment near the end of life
NextDear Australia, elegy for a summer of lossNext