Where is the “roadmap” leading, for remote Aboriginal communities in Western Australia?

The Western Australian Government recently released a “roadmap” for the future of the State’s regional and estimated 274 remote communities. This follows widespread concerns over the past 18 months about the threatened closure of some remote communities in WA.

The report, Resilient Families, Strong Communities, flags the WA Government’s intention to improve support and services to towns and larger communities, but that it “expects to support fewer communities over time, particularly as migration away from small outstations continues”.

The National Congress of Australia’s First People has raised concerns about the potential for the roadmap’s approach to cause harm to communities, families and cultures, as have others.

An online petition calls on the WA Premier to ensure Aboriginal communities are not forcibly closed and that Aboriginal people are not deterred from living in their communities due to inadequate provision of municipal and essential services. Robin Chapple, a Greens MLC, has introduced a Prevention of Forced Closure of Remote Aboriginal Communities Bill 2016 (available here).

In the article below, Dr Melissa Stoneham, Deputy Director of the Public Health Advocacy Institute WA, gives an overview of the report and raises questions about the lack of representation of health expertise in the WA Government processes.

Beneath her article are tweets from @SOSBlakAustralia, calling for supporters to aid resistance efforts.

This roadmap, although not perfect, is at least a move away from the Government’s previous strategy announced in November 2014.

Many will recall the WA Premier Colin Barnett stating that without further funding, many of the Aboriginal communities would become unsustainable and that WA would not provide additional funding to maintain essential services.

Following that announcement, many communities expressed outraged that there was little to no consultation and no plans were put forward by the WA Government as to where people would move to once the communities were closed.

A national day of action was held on May 1, 2015 where protests around Australia and overseas opposed the closure of remote WA communities.

The WA Minister for Indigenous Affairs Peter Collier promised consultation with affected communities, and Strategic Regional Advisory Councils in the Pilbara and Kimberley were established.

The brief was to advise on changes that could be made to government expenditure as well as a suite of policies, programs and governance to improve Aboriginal peoples’ outcomes.

And so we now have the roadmap, which focuses on major reforms to the delivery of housing, education, employment and human services.

Western Australia’s Regional Development Minister Terry Redman said the Government will not close communities but will help those that are not “eligible” for government investment because of “their size and sustainability” to become self-supporting.

A total of 120 communities have been identified as self-supporting, and Mr Redman advised that the roadmap has been created to help more communities join them.

The roadmap sets out 10 actions the government pledges to take: 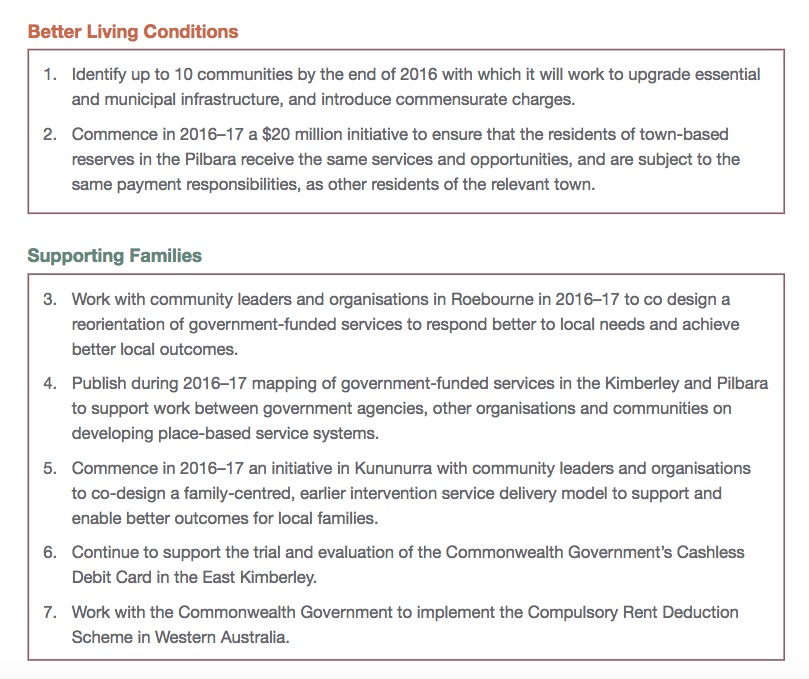 It is too early to make detailed comments about the roadmap, but I will suggest it is at least a start.

Some of the pledges above are quite generic while others are very specific. It will be interesting to see the implementation plan evolve and also the funding structures.

I was perplexed as to why there were no “health” experts involved in the Strategic Regional Advisory Councils, given health is clearly linked to the three key outcomes being essential services (reliable electricity, water supply, sewage treatment), municipal services (environmental health, rubbish collection) and housing services.

The roadmap website actually reinforces the health agenda by stating that the conditions, or lack thereof, such as essential and municipal services “affect residents’ health and wellbeing and, when a living environment is unsafe, unclean and overcrowded, children are less likely to attend school and adults are less likely to be employed”.

With the passing of the WA Health Act on 30 June 2016, you may be mistaken in thinking that Aboriginal communities will now be afforded the same level of public health services as other communities, especially as these conditions rank so highly on the roadmap website.

Unfortunately for Aboriginal communities located on Crown land, or those managed by the Aboriginal Lands Trust or land managed by Crown entities, the new Act does not authorise all enforcement action.

This means that works such as the maintenance of sewage or the supply of potable water cannot be enforced in respect of the Crown at a local level, and the Act does not provide for the Crown to be prosecuted. This is incredibly disappointing and is a missed opportunity for both equity and better public health management of Aboriginal communities in WA.

A further concern of mine and others is the idea of transition – which is stated within the media releases often. What does transition mean?

Summer May Finlay, a public health practitioner, Yorta Yorta woman and a Croakey contributor, shares these concerns and told me:

The Resilient Families, Strong Communities report has many solid proposals; however, it lacks substantial details.

The question for me is the details of how the Government plans to assist the smaller communities which will no longer be receiving municipal services and other necessities to become self-sustainable.

We know that to ensure a healthy environment there needs to be basics such as adequate refrigeration for food, running and hot water and electricity.

The government has a moral obligation to ensure that it has equipped these communities to maintain this infrastructure once it has been installed.

What we can’t afford is for there to be a decline in the standards of living in these communities further.

Community-based and stakeholder consultation on the implementation of the roadmap is scheduled to commence this month in the Kimberley and Pilbara regions. The Goldfields, which has 13 percent of its population identifying as Aboriginal or Torres Strait Islander, will remain untouched until 2017.

Yet, few would argue against the premise that something needs to be done – statistics indicate that nearly half of Aboriginal and Torres Strait Islander people in very remote areas reported having problems accessing services, including dentists and hospitals, and where almost half (49 per cent) of the remote WA Aboriginal communities have untreated drinking water and 52 per cent are without regular monthly testing of water quality.

Maybe…just maybe, this roadmap may be part of the solution. 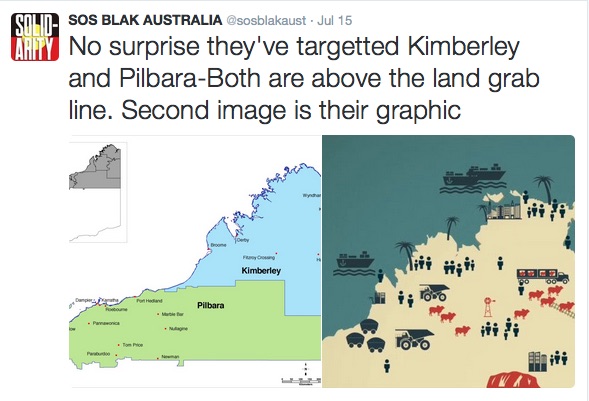 PrevPreviousSir Michael Marmot to deliver Boyer lectures – and other news on the social determinants of health
NextWe are promised “bold and ambitious” health reform. What are the chances?Next