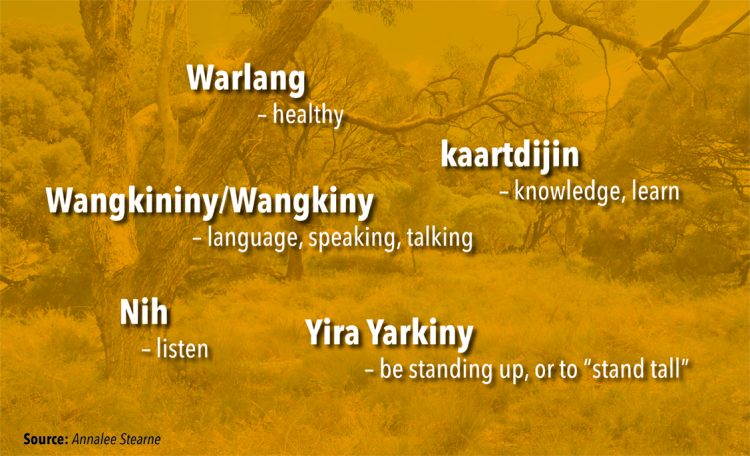 Supporting Aboriginal people to have agency and control in research, whether as researchers or participants

How can self-determination for Aboriginal and Torres Strait Islander people and communities be embedded into alcohol policy development?

Nyungar researcher Annalee Stearne will address this question in a presentation to a webinar, Aboriginal leadership in research and policy, this Thursday (20 August), launching the 2020 Symposium Series for the Centre of Research Excellence: Indigenous Health + Alcohol. (Update: watch a recording here).

In 2001, Nyungar woman Annalee Stearne was looking for a job in Perth after a few years of teaching in a remote community school west of Kalgoorlie in Western Australia.

She was offered a five-month contract with the National Drug Research Centre in Perth – and ended up working there for the next 15 years. During this time she saw first-hand the critical importance of communities exerting self-determination and autonomy in research.

Her roles with NDRI, including working alongside diverse Aboriginal communities across Australia in drug and alcohol program evaluation, brought a wealth of experience and knowledge to help inform the PhD she began early last year.

Her PhD investigates how to ensure that self-determination for First Nations Australians is evident and part of the alcohol policy development process.

Stearne, whose family has connections to the Onslow area in the Pilbara and the Kalgoorlie region, says alcohol policy development and implementation has a history of excluding the voices and knowledge of Aboriginal people and communities.

This happened with the Northern Territory Emergency Response (NTER) rolled out by the Howard Government in 2007, which has been widely critiqued for its harmful impacts.

Stearne recalls working in Alice Springs at the time, and the moment the fax announcing the NTER arrived. Then she saw the adverse consequences of this top-down policy process, and how it undermined community autonomy and initiatives, including those in alcohol policy.

On 20 August, Stearne will report on her work at the 2020 Symposium Series for the Centre of Research Excellence: Indigenous Health + Alcohol.

Webinar participants will also hear from Taleah Reynolds, an Anaiwan woman who is an Administrative and Research Support Officer for the CRE and two other NHMRC project grants. Reynolds has worked in education and housing for a number of years in Sydney.

Stearne’s PhD research will involve interviews with First Nations people working in the alcohol and health policy space, and she also plans to use a yarning methodology for developing case studies from communities.

These will tell the stories of different community-led responses to alcohol policy, including the work of the Children’s Ground, an Aboriginal organisation working for a “future in which every First Nations child can experience a lifetime of opportunity, entering adulthood strong in their identity and culture, connected to their local and global world, and economically independent”.

“My passion is supporting Aboriginal people to have agency and control in research, whether as researchers or participants,” Stearne says.

Stearne learnt much about community-led research when working at Tangentyere Council in Alice Springs for three years from 2005.

“I was supporting town camp residents to do their own research; it was walking alongside people,” she says.

She saw how participation from community is vital to driving solutions in this space, and that a self-determined approach to this and other research gives power and voice to First Nations people.

After leaving the NDRI in 2016, she returned to the NT, working with the Children’s Ground at Jabiru and Alice Springs, helping set up systems for long-term monitoring and evaluation of programs.

Stearne recalls long “Friday afternoon conversations” about community controlled organisations with the chair of Children’s Ground, Arrernte man William Tilmouth, who was a key advisor to the film, In My Blood it Runs.

“Just having a board doesn’t make the service secure or community controlled; it’s a process that needs to be constantly thought through,” she says.

Stearne was back in Perth, working at the Telethon Kids Institute and managing research projects in Pilbara, Newcastle and Alice Springs, when a series of conversations with researchers Associate Professor Scott Wilson Scott and Professor Kate Conigrave – Co-Directors of the Centre of Research Excellence in Indigenous Health and Alcohol – led to her decision to embark on a PhD.

She is a student with the CRE and enrolled through Curtin University, with her supervisors including Professor Steve Allsop and Professor Anthony Shakeshaft. She is proud that Yuat Nyungar man Associate Professor Michael Wright is one of her supervisors, and acknowledges his longstanding work with communities.

Stearne is also grateful for mentorship over many years from the NDRI’s Professor Dennis Gray and Professor Sherry Saggers, and from Aboriginal leaders who have long fought for Aboriginal leadership in health, such as Associate Professor Ted Wilkes, William Tilmouth, and Coralie Ober.

“I’ve been having conversations with these colleagues about community ownership of research long before I started a PhD,” she says.

According to Scott Wilson, The Centre of Research Excellence is designed to create pathways for Aboriginal and Torres Strait Islander people to lead the way in alcohol research.

“Aboriginal and Torres Strait Islander people have cultural knowledge and community knowledge,” he says. “They are in the ideal position to better understand the real-life situation, and to work with communities and services to on solutions to challenges.

“Every Aboriginal or Torres Strait Islander community is unique. It has its own culture, its own history, and often its own geography and context. Community must have a key role in alcohol policy development. Community also knows what’s worked well before and what hasn’t.”

Wilson says Aboriginal and Torres Strait Islander Australians are less likely to drink alcohol than other Australians, but those who do drink can be at increased risk of harms.

Stearne stresses the importance of reforming structures and processes so that Aboriginal and Torres Strait Islander people have a real influence over policy, through changes such as those envisaged by the Uluru Statement from the Heart.

“We need change at every level to ensure people have a voice in policy,” she says. “If you’re not changing what you are doing, you can’t expect the process or the outcome to be different. Something needs to change.”

Her experience over the past 20 years, which has included running a bibliographic data base on the Indigenous drug and alcohol field, has given her a realistic understanding of research processes. This makes her pragmatic about where her PhD journey may lead.

“No research ever goes to plan,” she says.

Stearne says she has learnt from watching many other people go through PhDs that supervisors, mentors and support are critical. She speaks warmly about the support provided through CRE and is looking forward to seeing where her research journey leads.

• In 2006, Stearne was a member of the research team that won the National Drug and Alcohol Award for Excellence in Research, and a Curtin University Vice-Chancellor’s Award for Excellence. In 2012, she received the First People’s Award – recognising a substantial and practical contribution to the advancement of the health of Indigenous people – in the annual Australasian Professional Society on Alcohol and other Drugs (APSAD) Awards. Currently she sits on the board of the National Centre for Clinical Research on Emerging Drugs (NCCRED) and the board Palmerston Association (treatment service) where she advocates for Indigenous Australian interests. Read more here.

The Croakey Conference News Service is producing a series profiling some of the speakers at the 2020 Symposium Series, and Dr Tess Ryan will also live-tweet each webinar. Follow @TessRyan1.

The webinars are from 11am-12pm AEST.

Sep 3: Unhealthy alcohol use and dependence: in community and prison samples 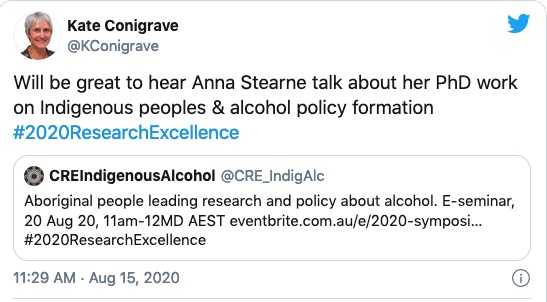 PrevPreviousBreaking down the barriers to care
NextIn Victoria, whether you get an ICU bed could depend on the hospitalNext