A call to medical arms: seize the opportunity of current co-payment debate and push for real reform

The fight against the Federal Government’s proposed GP co-payment should keep an eye on the big picture and the need for serious structural reform in general practice and remuneration systems, says rural medico Dr Paul Mara.

The current debate provides GPs and rural doctors with “a once in a decade” chance to re-engineer the current system to support capital investment, and reward improved management of community health needs, he says.

Look beyond the co-payment

I confess I get a bit twitchy when there is agreement between the Labor Party, Greens, Clive Palmer, the RACGP and the AMA.

I’m referring, of course, to the response to the Commonwealth Budget and in particular the proposed introduction of the GP co-payment.

For the Labor Party and Greens, it is an opportunity to slam Tony Abbott with the broken promises tag. Of the medical groups, the RACGP appears to taking the strongest stance, supporting the CoPayNoWay campaign.

Since its initial release, the AMA has stepped back a bit, not surprisingly. The AMA has never opposed co-payments, it just wants its own style of co-payment, not one foistered on it by governments and not one that would dramatically affect the incomes of its members.

But this is not a co-payment. It is simply a rebate reduction. Basically I’m less concerned about the co-payment than some other aspects of the budget.

Sure, if the system as mooted gets through unchanged, then there will be significant consequences for some patients’ care, the economic viability of many general practices and the whole notion of general practice as the gatekeeper and provider of continuing, whole patient care.

Wide-ranging impacts
GP income, particularly in the cities will drop – not the 15-20% predicted by the RACGP, but closer to 40%.

There will be a range of subspecialty and vertically integrated clinic style practices emerge for management of conditions such as obesity, diabetes, hypertension with streamlined access to specialist services.

Across the board, 10-15% of patients will simply be unwilling or unable to pay, and GPs will probably wear this. At the upper end, there will be downward pressure on private fees. In the middle, most people would wear the co-payment but at the cost of a reluctance to come back for follow ups or recalls.

The evolving model of care encouraging higher turnover of patients with a range of problems suited to nurse management will be entrenched as patients will simply refuse to pay co-payments for daily, weekly or even monthly followups.

GPs have been caught in an activity trap, partly of their own making, but one which in reality is system driven in the context of a fee for service system with an oversupply (yes I said oversupply, and mean it) of doctors.

We could continue with a list of problems and whinge about the already lousy rebates, but I’m not so concerned about the co-payment issue.

I’m more worried about our response. If we do manage to kill off the co-payment it will be a pyrrhic political victory that will have consequences.

From an inadequate base in 1987, the rebate is now at least $15 – $20 behind what it should be, because of the indexation method used and arbitrary decisions of government to cap increases, while private health funds have seen increases annually in the 5-6% range.

An opportunity for systemic change
Every so often an issue comes around that provides opportunity. In fact, I think the debate provides GPs and rural doctors with a once-in-a-decade chance to re-engineer the current system.

It offers us the opportunity to hop off the merry go round and consider real structural reform in practice and remuneration systems that support capital investment, reflect and reward improved management of community health needs with an ageing population and chronic disease and ensure that general practice remains relevant into the future.

I’m not talking about nationalisation of doctors ,or socialised medicine, or schemes devised by left wing academics or bureaucrats on the sixth floor of some building in Canberra with a spreadsheet or – at the other end of the spectrum – corporatised managed care.

Everywhere I go, I see GPs who in their own practices are developing better ways to independently meet the challenges of modern general practice and the needs of their patients.

They simply need a bit more system flexibility and more rewards for meeting real health needs, rather than the froth and bubble or getting caught in the turnover trap simply to remain viable.

We need to get smart and get beyond the co-payment as quickly as possible.

Perhaps Brian Owler from the AMA said it all in a recent review when he argued for a mixed remuneration system of fee for service but also innovative ways of supporting prevention and chronic disease management.

The question is, are we as GPs and rural doctors and our professional organisations up for the challenge?

• Dr Paul Mara is a longstanding rural doctor from Gundagai. He has had over 25 years experience in medical politics, was a founding executive member of the rural doctors association and is recent past president and current treasurer of the association.

Meanwhile, check out CoPayStories, a grassroots campaign by “volunteers passionate about the future of universal healthcare” that is collecting stories about the impact of the proposed new co-payments (declaration: Melissa Sweet was involved in some of the early online discussions that led to this site being set up). 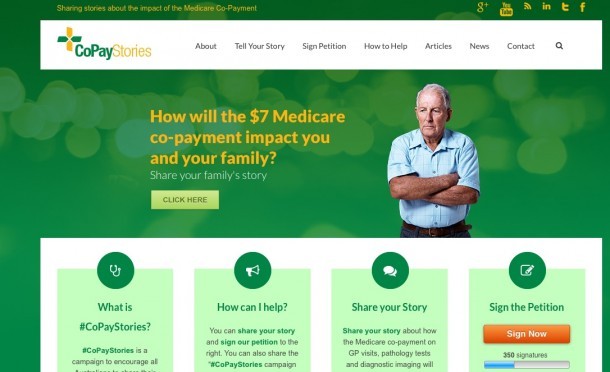 PrevPreviousHow the “Prime Minister for Indigenous affairs” slashed health spending
NextNow this is a “Budget emergency”: the decimation of the public health workforceNext