As previously covered at Croakey, this Thursday (tomorrow) has been declared a day of action and listening on Twitter on all matters to do with the health of Aboriginal and Torres Strait Islander peoples.

Croakey readers are invited to follow the discussions at #IHMayDay. Also @Croakeyblog will aim to provide thorough Twitter coverage, and will only be RT-ing tweets carrying the hashtag #IHMayDay tomorrow.

The idea is for Aboriginal and Torres Strait Islander peoples to share their views and knowledge about some of the wide-ranging issues affecting health, and for non-Indigenous people to participate by RT-ing and listening.

The event is timely given predicted cuts to Indigenous programs predicted for the Federal Budget.

The day’s discussions will be moderated by James Cook University nursing academic Dr Lynore Geia – who had the idea for the event and who is also tweeting this week for @IndigenousX (read more here in her profile at The Guardian).

“We would like the day to provide a constructive critical discourse on Indigenous health.

“We do not all have to agree about everything, but I encourage everyone to engage in the discussions with respect and goodwill, and to refrain from personal attacks.”

During the day, guest moderators will focus discussions around particular topics (although of course the Twitterverse may wish to raise other matters).

9am-11am AEST: Celebrating Aboriginality
University of Queensland academic Dr Chelsea Bond
Inspired by Vernon AhKee’s ill-like work, let’s challenge the sickness of public health practice in which Aboriginality=sickness & premature death. Instead, let’s examine and celebrate the ways that Aboriginality is conducive to better health. Let’s use this day to reclaim the narrative about Aboriginality as well as health.  #blackishealth
@drcbond

12 noon – 1pm Healthy Choices
Jody Currie from the Institute for Urban Indigenous Health (IUIH) will be talking about the diverse communities in south-east Qld, the people IUIH work with, and the amazing transformation in health and community outcomes.
@IUIH_ @DeadlyChoices

1-2pm Engaging with the Twitter community
Luke Pearson, founder of @IndigenousX and contributor to the NCIE’s Community of Excellence forum
Luke will give some tips for how health organisations, professionals and others can make effective use of Twitter.
@LukeLPearson

3-5pm AEST: Strategies for addressing drug and alcohol misuse among Aboriginal youth
Dr Lynore Geia, James Cook University @IndigenousX
Mel Riordan (@MelRiordan) from Rural Health Consulting will also contribute to this session, which will examine evidence-based solutions on ‘what works’. It will focus largely on the wide range of diversional strategies that are recommended for supporting young people who are misusing alcohol, drugs and inhalants (rather than detention).  It will focus on strategies that utilise a strengths-based/resilience-promoting approach. This session will also draw upon the recommendations arising out of the Smart Justice for Young People initiative in Victoria, whereby youth diversion activities have been enormously successful at supporting young people who hover on the cusp of our justice system; reducing reoffending and making communities safer.

5pm-6pm: Healing and youth
Blake Tatafu will speak about some of the issues arising from his work as a Young Healer with the Healing Foundation.
@BlaykeTatafu

6pm-8pm AEST: Directions for the future
Kirstie Parker will be tweeting on the National Congress of Australia’s First Peoples, the national campaign Close the Gap, directions for the future including greater and better resourced community control and – in the context of current proposals to weaken protections under the Racial Discrimination Act 1975 – the impact of racism on Indigenous health.
@kirstiecongress

8pm-10pm AEST: Positive male perspectives
Social work student Dameyon Bonson, from Broome, WA
@db_1974
Talking about the portrayal of Indigenous men in health/human service provision promotional materials, and the lack of positive/empowering imagery. Also, how “behavioural change” programs contribute to negative stereotype and assumptions, and how promoting programs as “behavioural enhancement” is more strengths based.  He will also talk about the limited number of academics teaching social work and the Indigenous LGBQTI community.

Also during the day:

Journalist and editor Amy McQuire (@amymcquire) hopes to tweet in on the media and Indigenous health (some background reading on related is at this Croakey post.)

What you can do

If you would like to engage with #IHMayDay, Dr Geia suggests you consider:

• Include the hashtag #IHMayDay in your tweets. You might also like to add other relevant hashtags where appropriate, eg #publichealth, #SDOH, or #Auspol etc.

• Write to the Prime Minister, your local MP and newspaper about the need for sustained investment in Indigenous health.

• Write to newspapers and other media outlets when you see misleading or harmful coverage.

Some coverage of #IHMayDay at:
• NITV
• Rhonda Wilson’s blog

And on Friday, keep an eye for the #2014IWHM stream, for news from the third Indigenous Women’s Health Meeting, which will be held in Adelaide, hosted by the Royal Australian and New Zealand College of Obstetricians and Gynaecologists.

Summer May Finlay @OnTopicAus will be amongst those tweeting from this event. 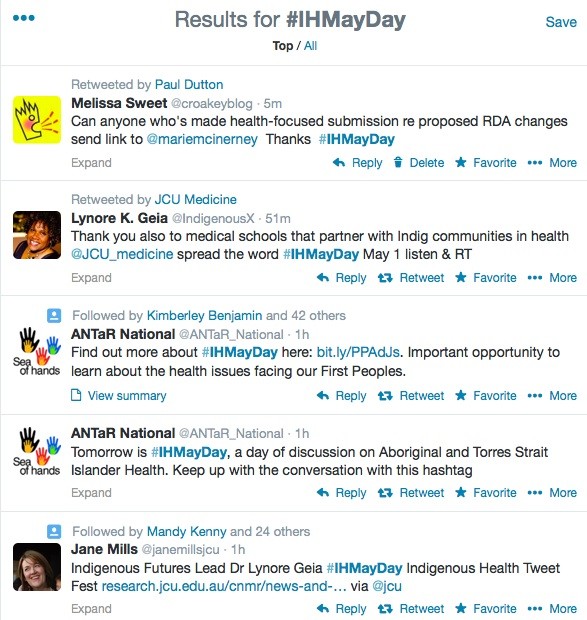