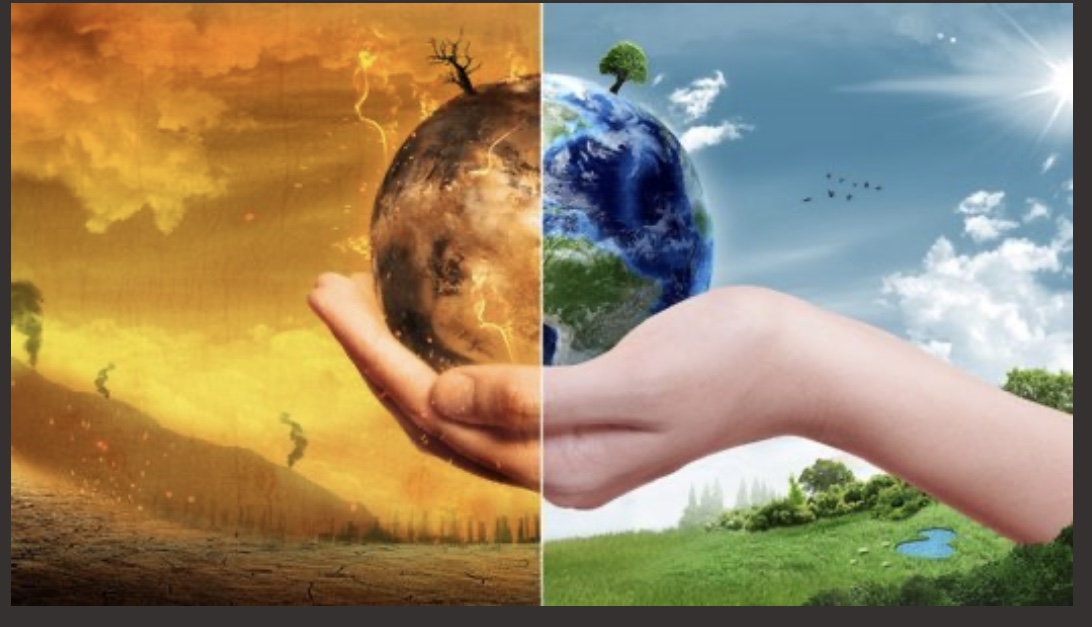 In a massive week of activism for action on climate change, we were lucky to have two of the leadership team of The Climate and Health Alliance –  @healthy_climate – on deck at at Croakey’s rotational Twitter account @WePublicHealth, last week.

We started the week with CAHA’s Engagement Manager, Adam Pulford @adampulford, with CAHA founder and Executive Director, Dr Fiona Armstrong @farm_strong taking the helm, for the National Climate Emergency Summit over the weekend.

Marie McInerney also reported on the summit for Croakey – you can read her very engaging summary, Seven Snapshots from the National Climate Emergency Summit.

During the week CAHA also convened an an expert panel on health and the climate emergency, launching their Climate Change is a Health Emergency campaign. Adam Pulford explained the rationale for the campaign in a preview article here.

With all this background, let’s see how the week unfolded.

Climate change is a health emergency 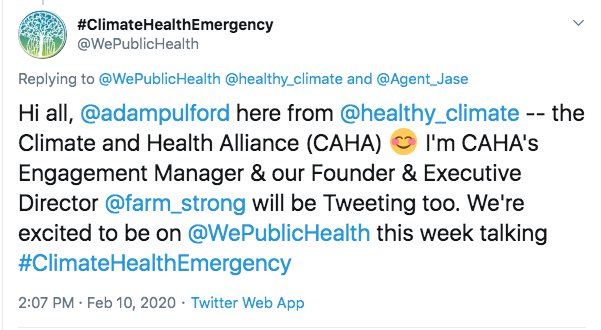 First up, Adam Pulford invited followers the expert panel discussion on ‘The Health Emergency of Climate Change’, at Melbourne Town Hall, flagging that the event would be live streamed on the CAHA Facebook page: http://facebook.com/climateandhealthalliance…

He also flagged the upcoming launch of the #ClimateHealthEmergency campaign and set the agenda for the week.

Pulford wrote of the release of the Independent Member for Warringah, Zali Steggall’s climate change bill:

@zalisteggall is calling on all politicians from across the political divide to support this legislation — as an urgent response to the #ClimateHealthEmergency that has devastated so much of the country this last summer.

He also linked to an online template “developed by CAHA for people to reach out to their local MP and call on them to act on climate to protect our health.” 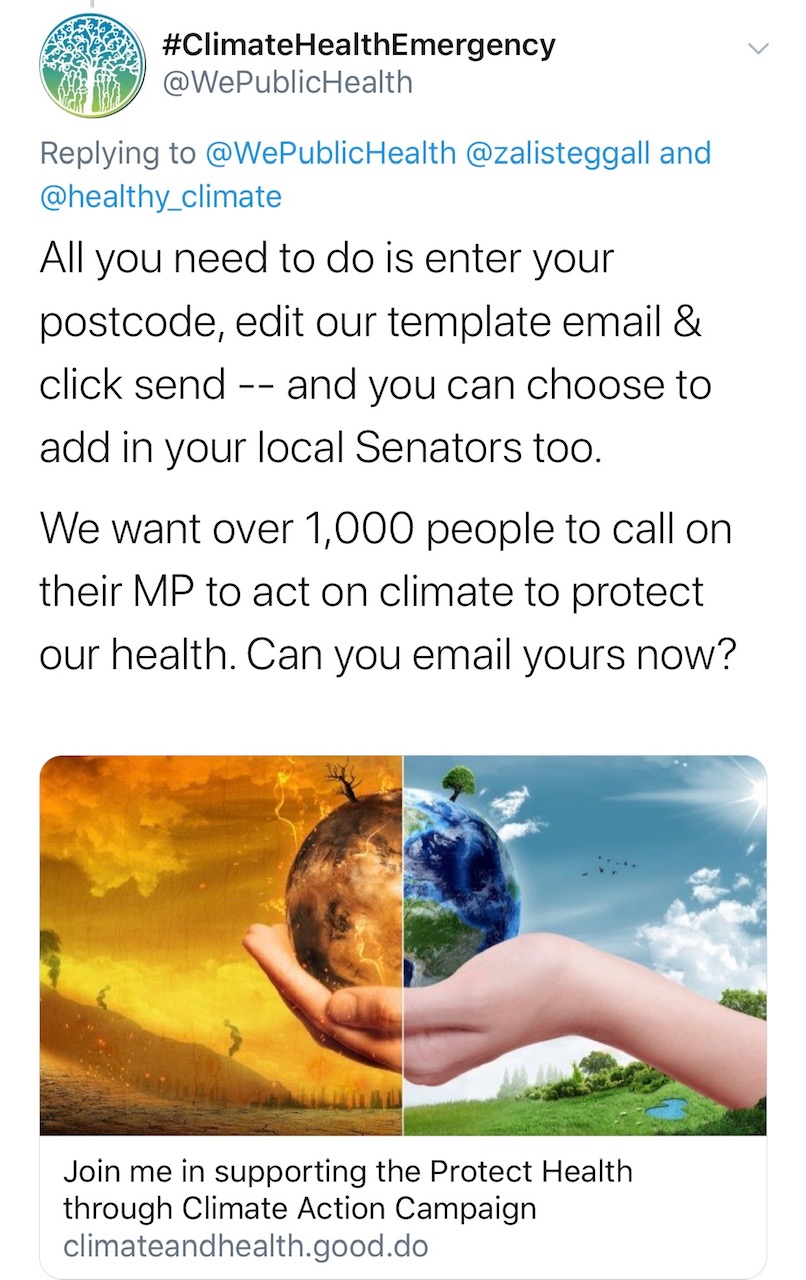 Wrote Pulford: Climate change is responsible for a rising death toll & spread of illness around the world. With global temperatures predicted to rise dramatically, the health impacts of climate change will only get worse. So just how is climate change affecting people’s health? 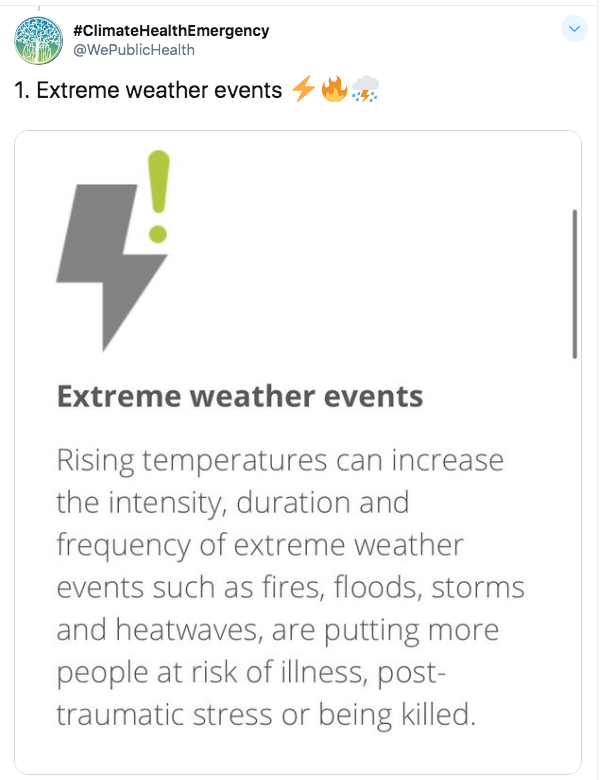 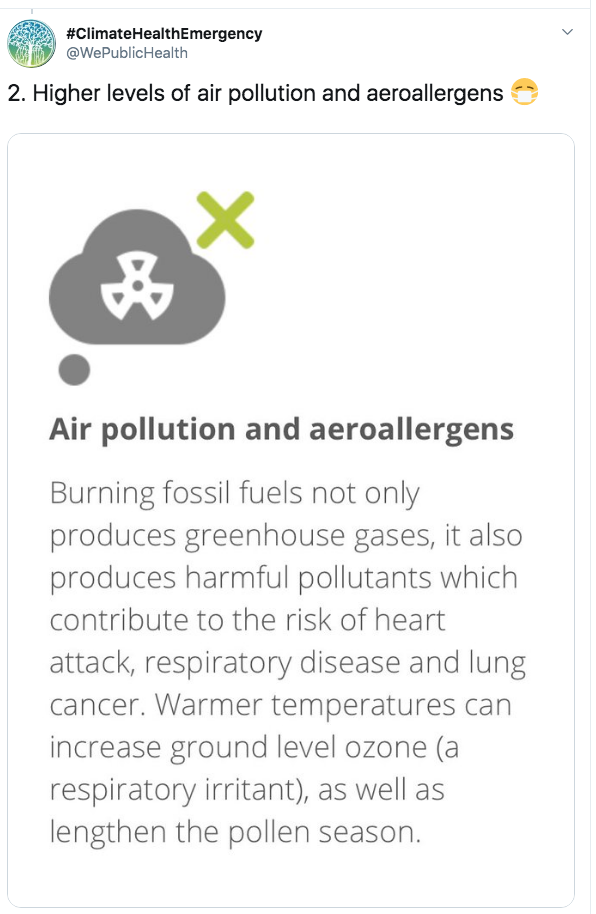 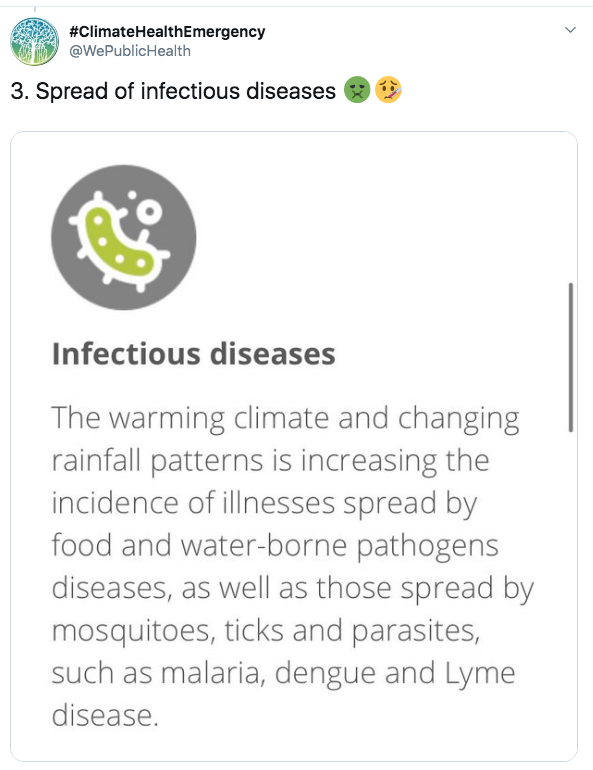 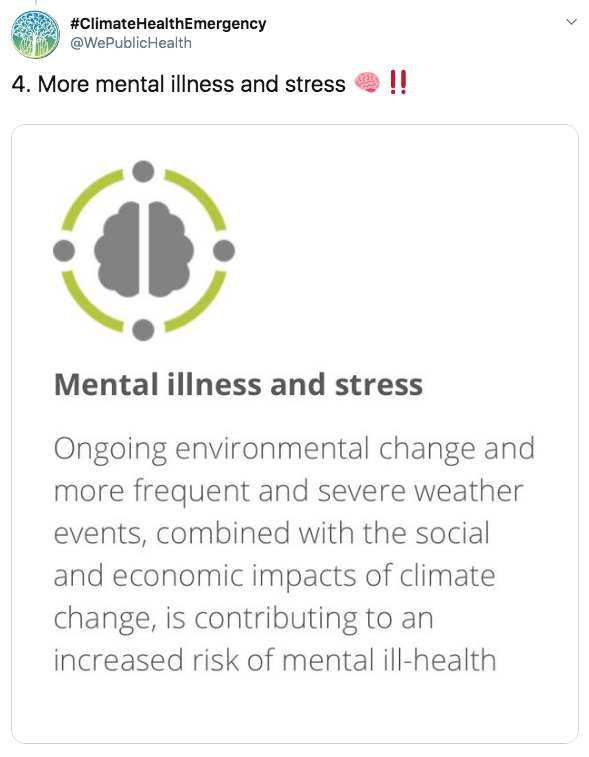 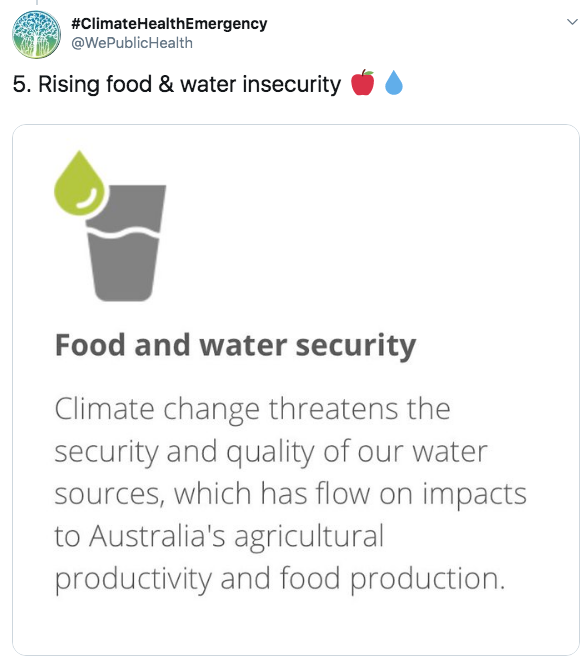 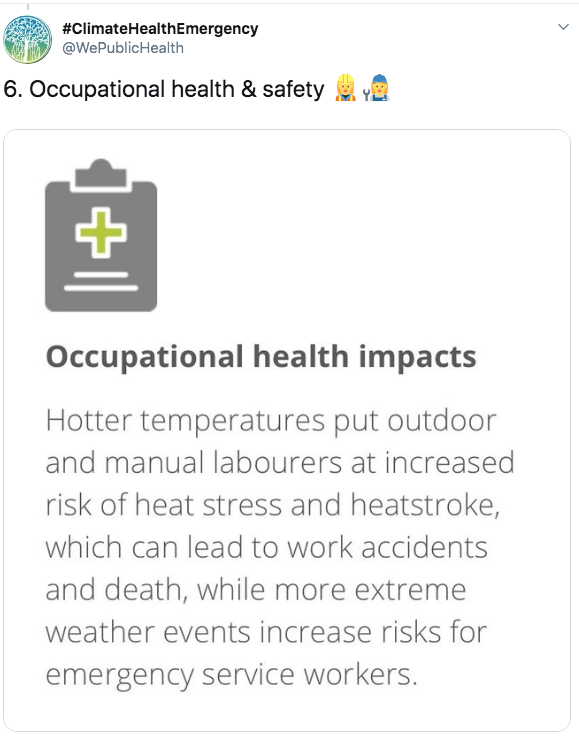 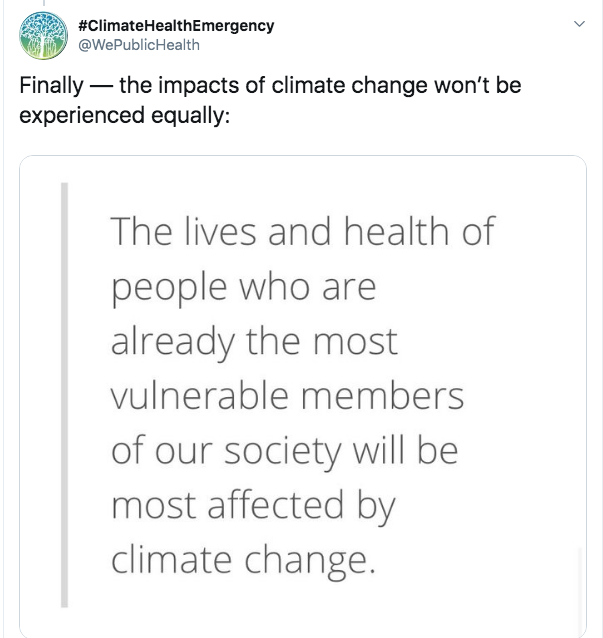 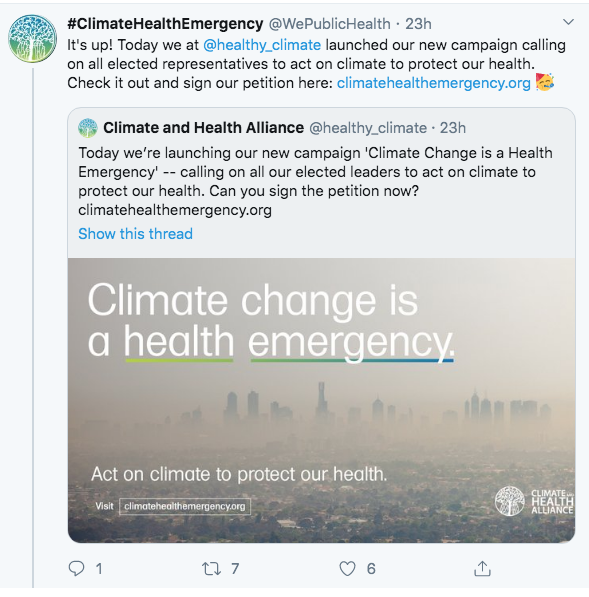 Pulford wrote: The bushfires and smoke have forced the reality of the climate health emergency on much of the country over past months, and right now there is huge public support for action on climate change. Our campaign aims to channel this public support into urgent climate action.

Through our campaign we’ll:

Pulford posted the following thread, looking at a survey from the Consumers Health forum of Australia, on consumer anxiety about climate change. 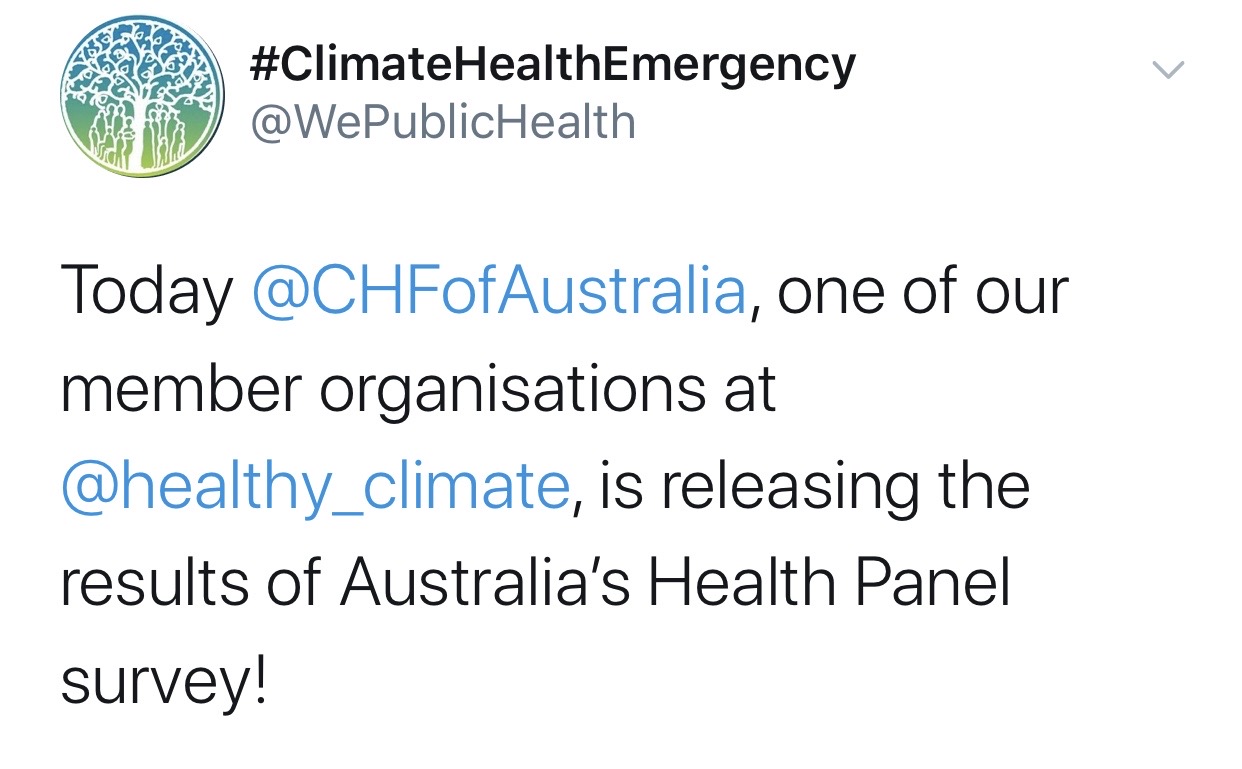 A large majority of those who participated in the survey conducted last month expressed concern at a range of climate change impacts on health and said the government is not doing enough to counter potential harms.

While 81% of panellists believed that the government was not doing enough to counter health impacts of climate change, almost as many, 79%, said they were personally taking steps to reduce the impact of climate change on their own health.

“The bush fires have made the need for preventive steps to protect health much more obvious and pressing, whether it be more attention to respiratory needs of children or more targeted care for those with chronic conditions.”

CHF chief, Leanne Wells also said the findings reinforce the heightened community sentiment about climate change and its effects on health triggered by this summer’s events and must spur the community and governments to recognise the need for more urgent and comprehensive action.

This includes committing to a National Strategy on Climate Change, Health and Well-being. The health sector has been calling for this for a number of years, and has developed this comprehensive Framework to guide government action on climate and health.

We at @healthy_climate partner with Health Care Without Harm  @HCWHGlobal to manage the Global Green and Health Hospitals program in Australia & New Zealand. Learn more here:

Currently we have 82 @Green_Hospitals members in the Pacific region, representing over 1,000 hospitals and health services!

The program fosters a community of practice between healthcare providers where members share lessons and resources, and attend forums, to become more sustainable and increase climate resilience.

To become a member is free, but members must commit to taking action in at least 2 of the 10 goals of @Green_Hospitals

If you’re interested in your health institution becoming a member of @Green_Hospitals you can get in touch with our team at @healthy_climate or learn more here.

@western_health has ~700 beds and like most Australian hospitals, use a variety of different general anaesthetic gases, but primarily sevoflurane, desflurane with some nitrous oxide (N2O). Propofol is an intravenous anaesthetic agent that can be substituted for these gases.

In 2012, the Anaesthetic Department had become aware that desflurane & N2O had large global warming potentials (much greater than for sevoflurane or propofol) through publications by Dr Sulbaek Anderson & Dr Jodi Sherman in Anesthesia and Analgesia.

All general anaesthetic gases have similar clinical effects and in most situations there are no large benefits in using one agent appropriately instead of another.

Undoubtedly, for an individual anesthesiologist, the greatest contribution they could make to lessening their effects upon the #ClimateHealthEmergency would be to replace all use of desflurane and N2O with sevoflurane and propofol.

For example, complete transfer from the use of desflurane to sevoflurane as one’s standard general anaesthetic gas would be the equivalent of no longer flying return economy Melbourne to London fortnightly!

As a result of several presentations on this topic in 2012 the majority of @western_health ‘s Anaesthetic Department voluntarily reduced their desflurane & nitrous oxide use and attempted to use lower flows of gases in general.

No staff training was req’d apart from initial presentations. Implementation was straightforward & achieved by anesthesiologists simply changing their practice to avoid desflurane and nitrous oxide.

And junior registrar (resident) doctors from other hospitals on rotation through @western_health were educated by senior anesthesiologists about avoiding the use of desflurane and nitrous oxide where possible.

Join @Green_Hospitals yourself! It’s free and through it your health institution can learn how to cut emissions & waste and become more sustainable & climate resilient!

The full panel presentation can be viewed here,

And here’s a thread, retweeted from Marie McInerney, who attended the panel discussion on behalf of Croakey. 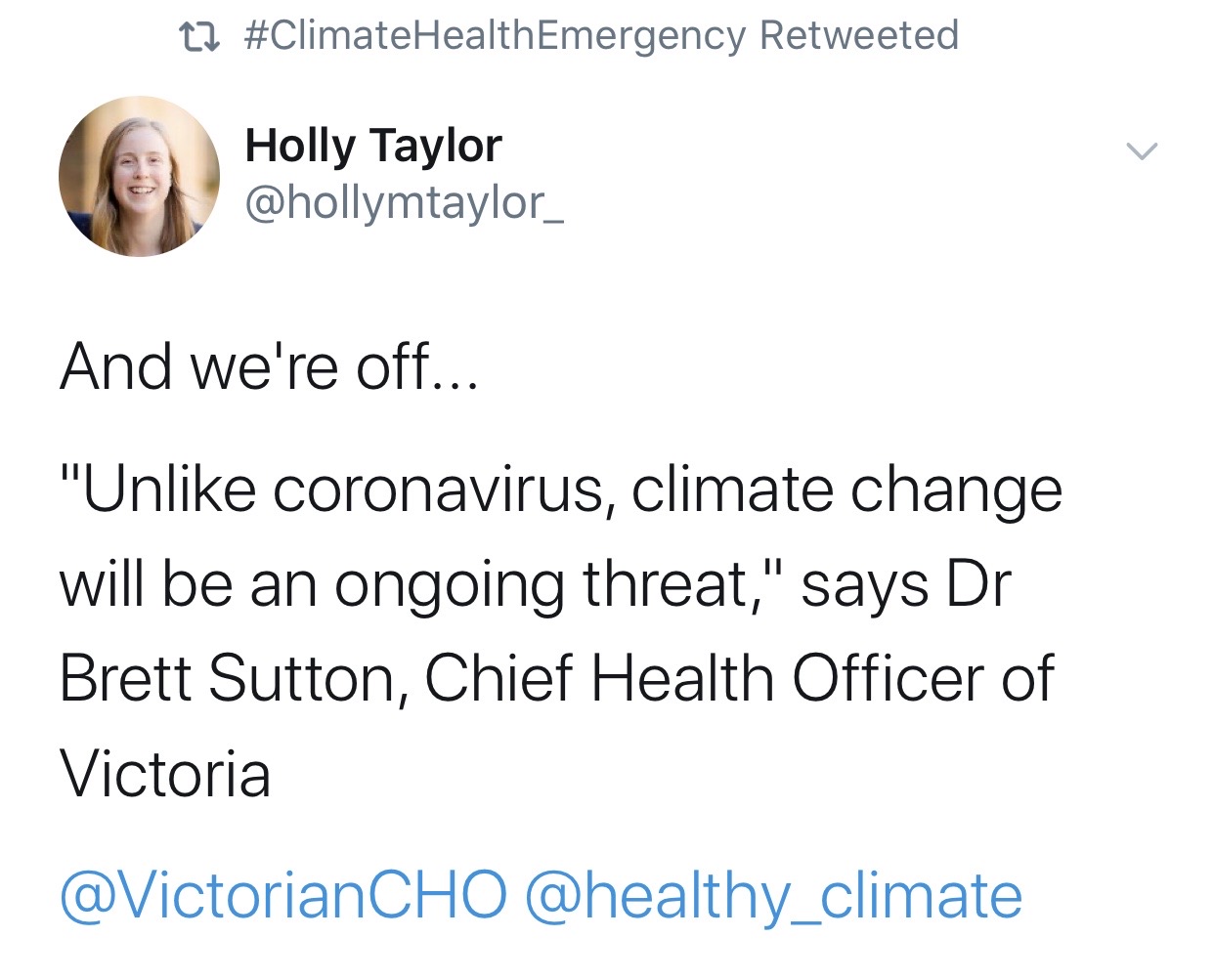 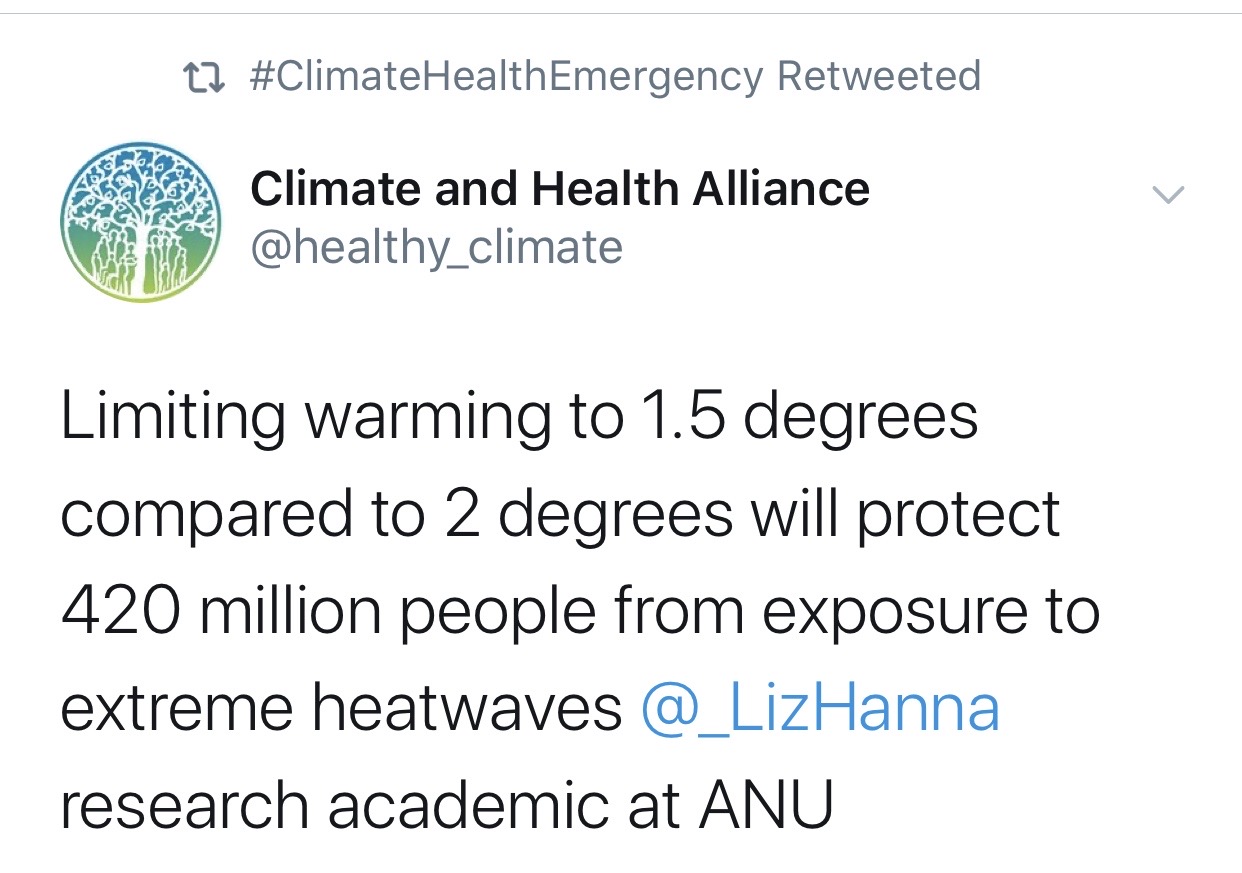 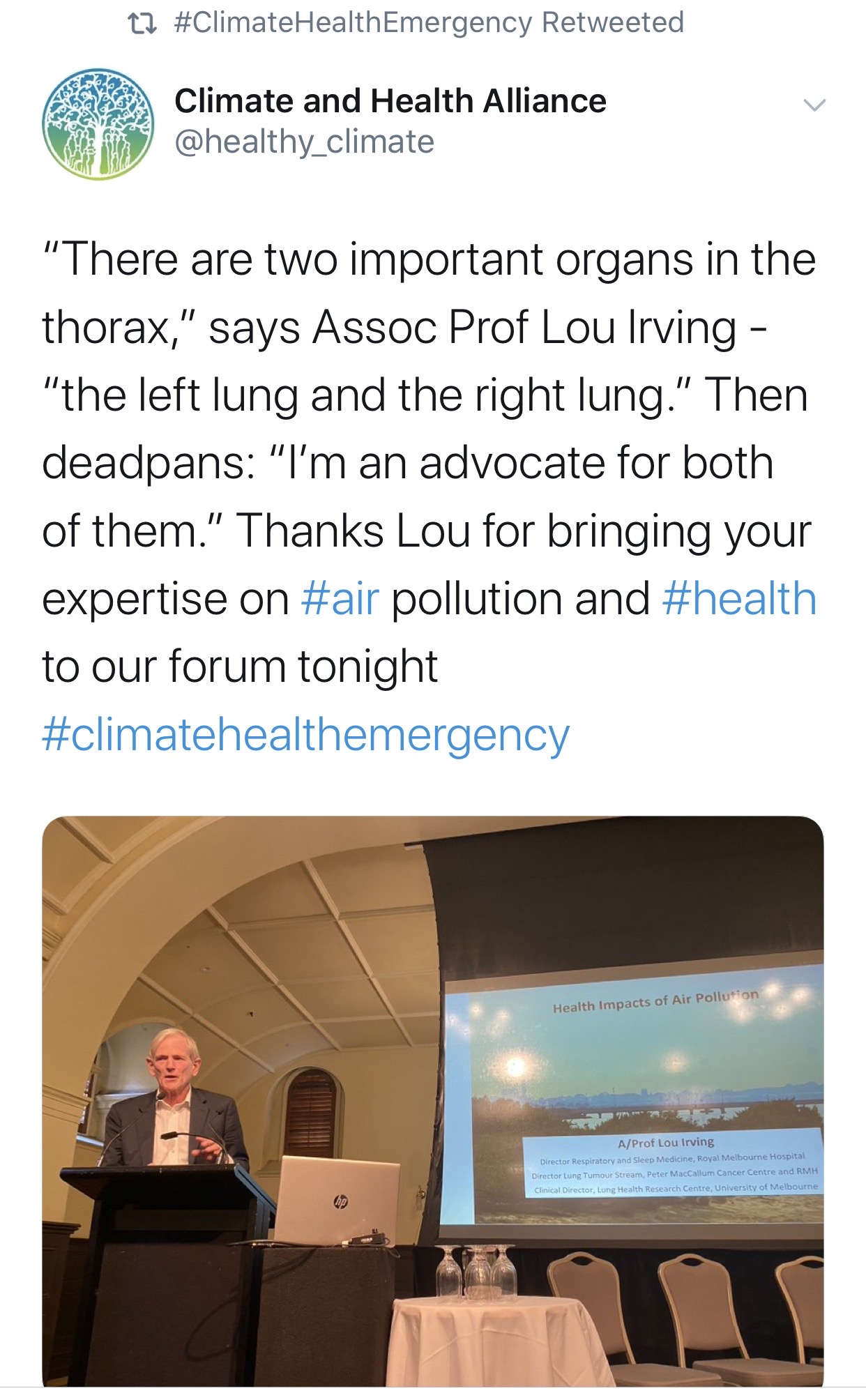 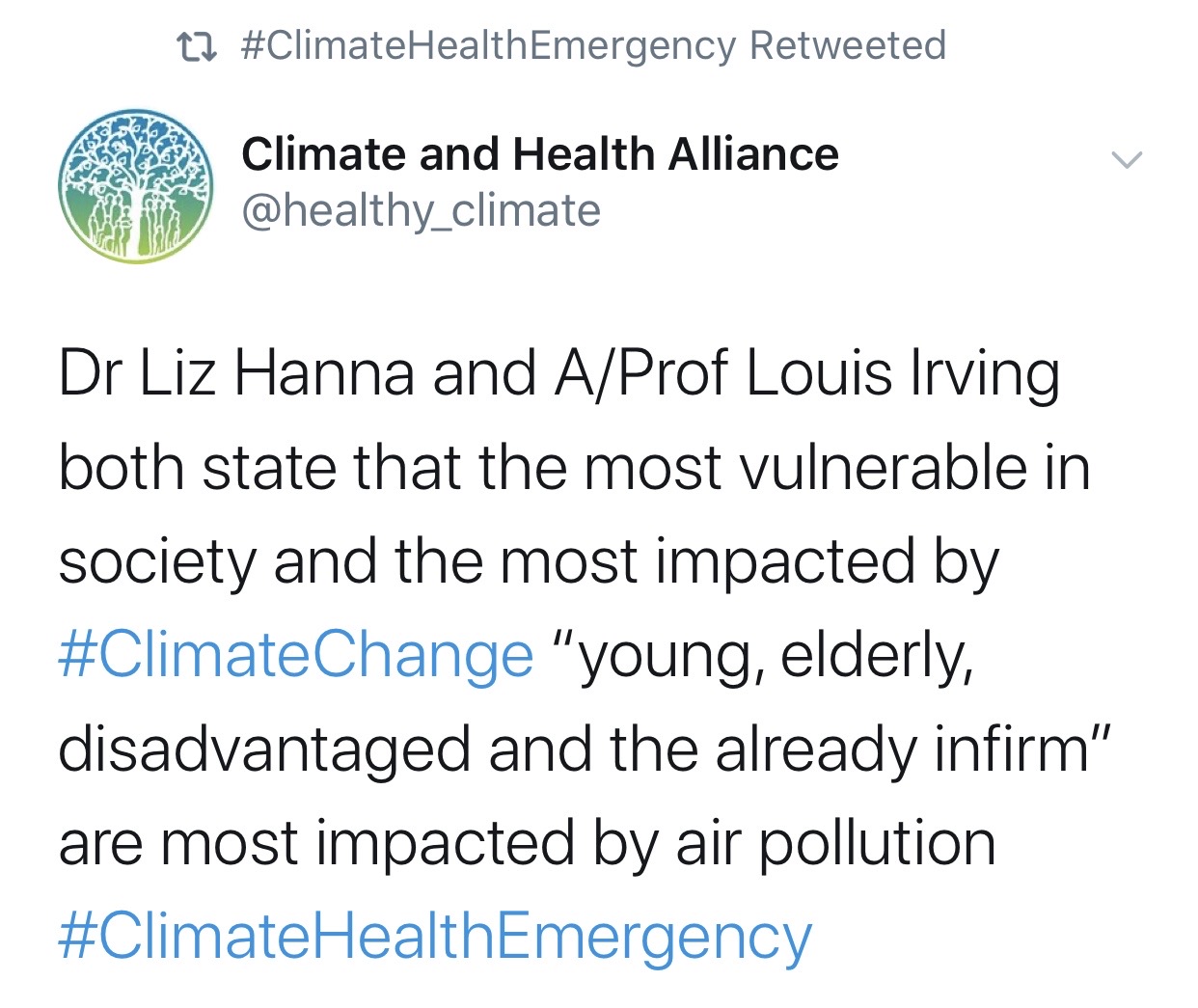 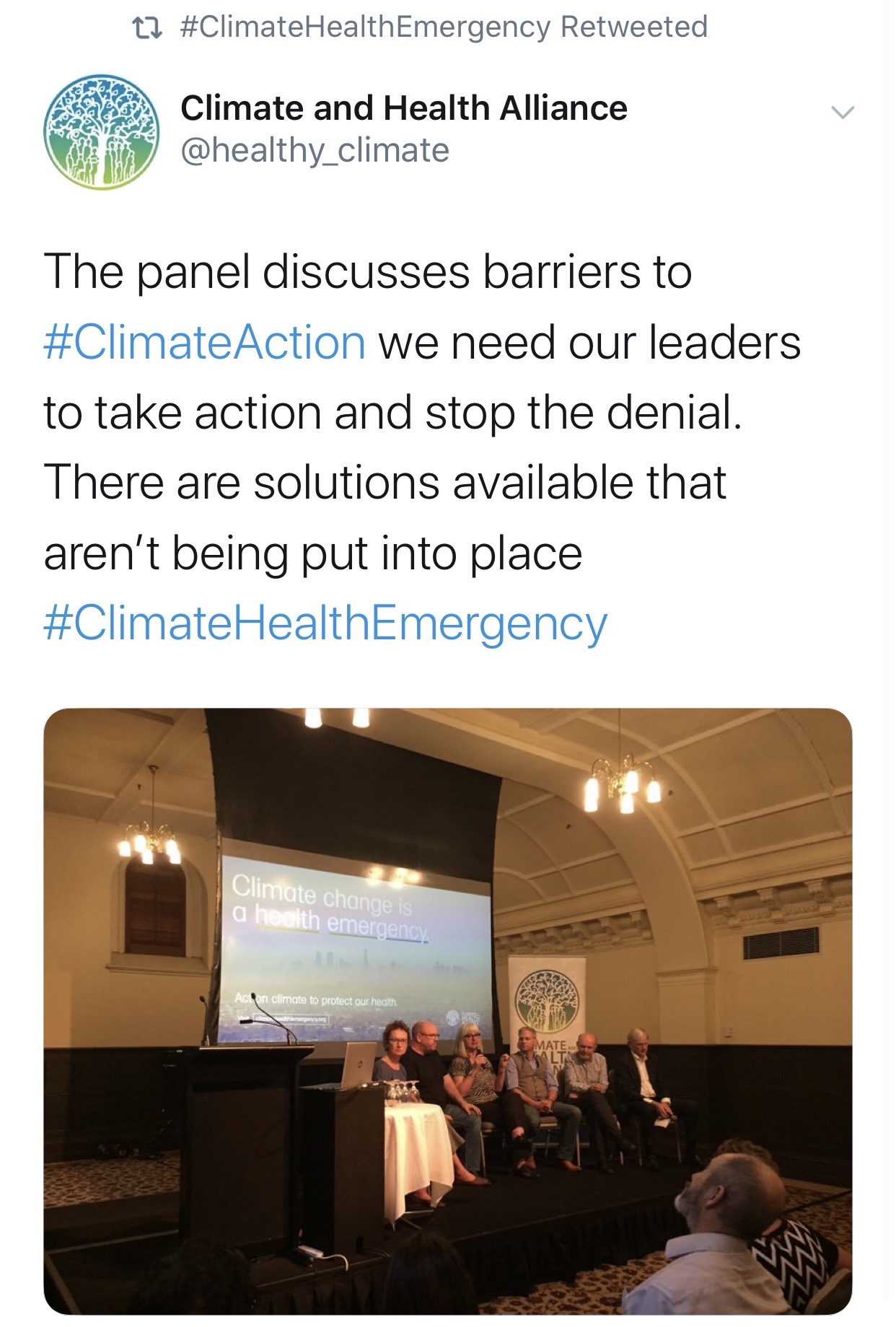 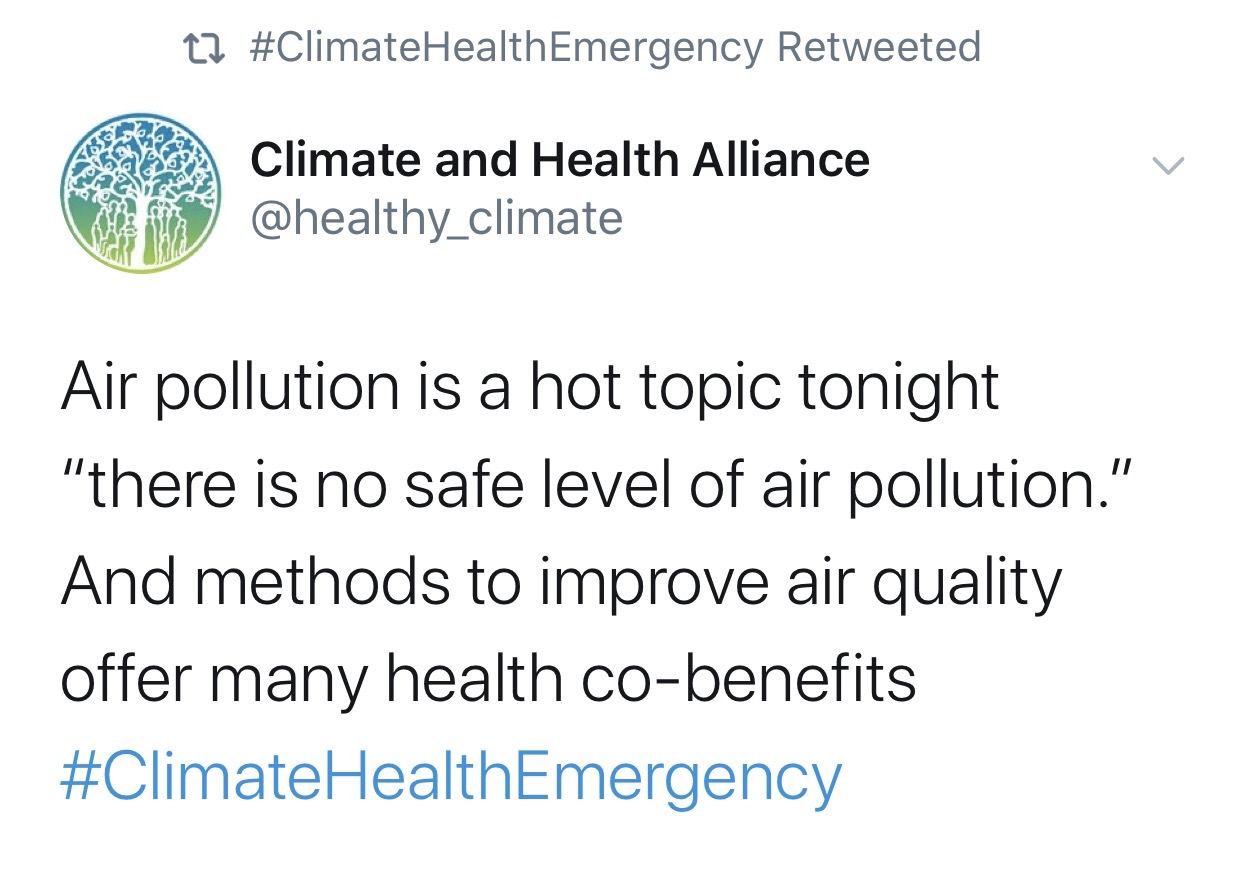 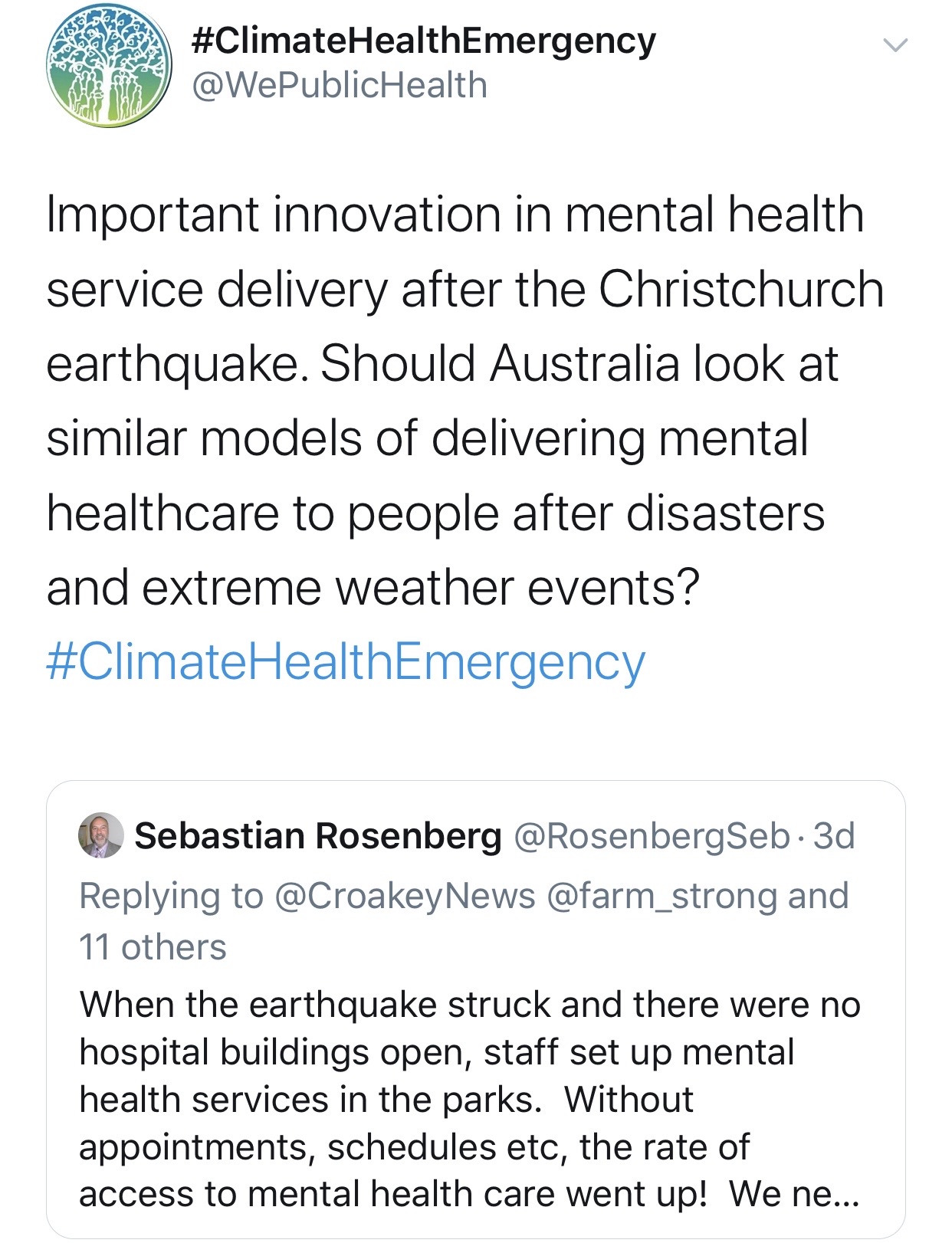 CAHA founder and Executive Director, Dr Fiona Armstrong, shared some of the highlights of the National Climate Emergency Summit with @WePublicHealth followers. There was a massive chorus of Twitter voices (do read Croakey’s coverage of the summit here and here).

The summit was also livestreamed, and you can visit the summit page, to sign on to the Safe Climate Declaration.

Below are a few highlights: 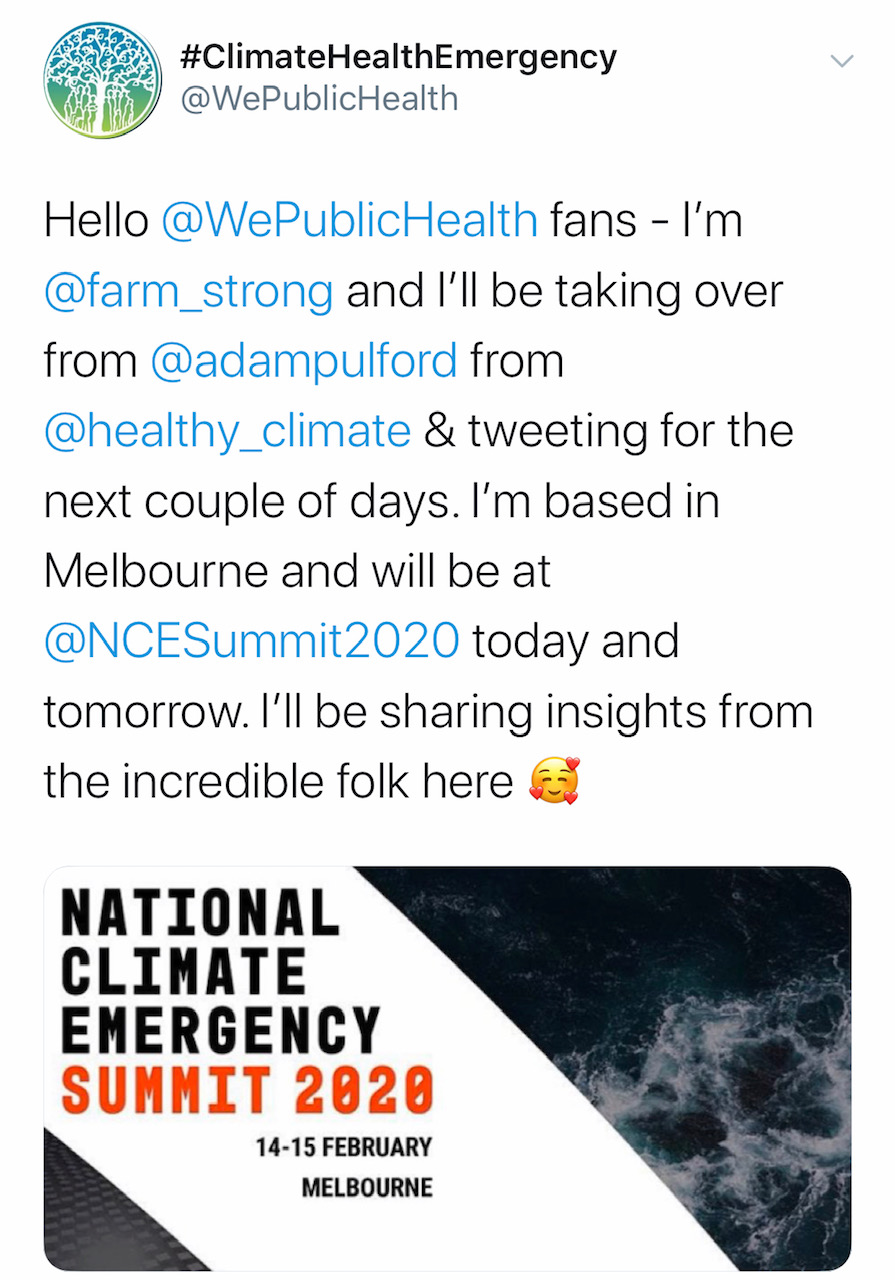 Armstrong highlighted a thread from the opening session, and another interesting thread on Climate and politics, with speakers including Zali Steggal and Peter Garrett. 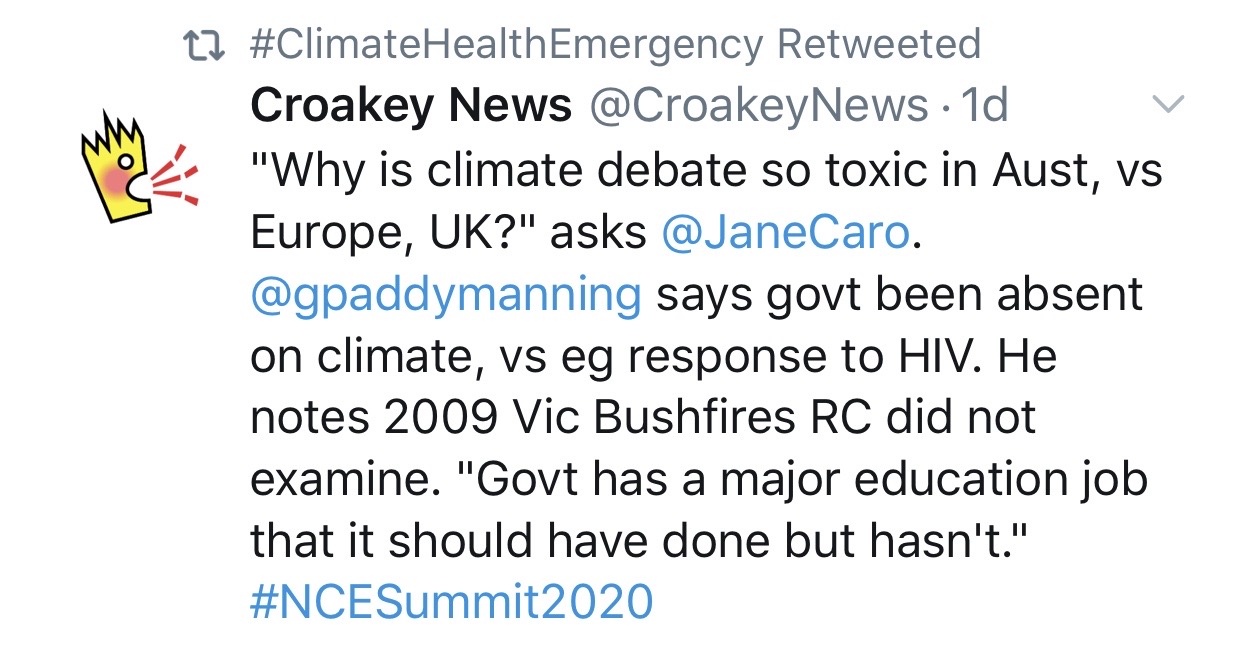 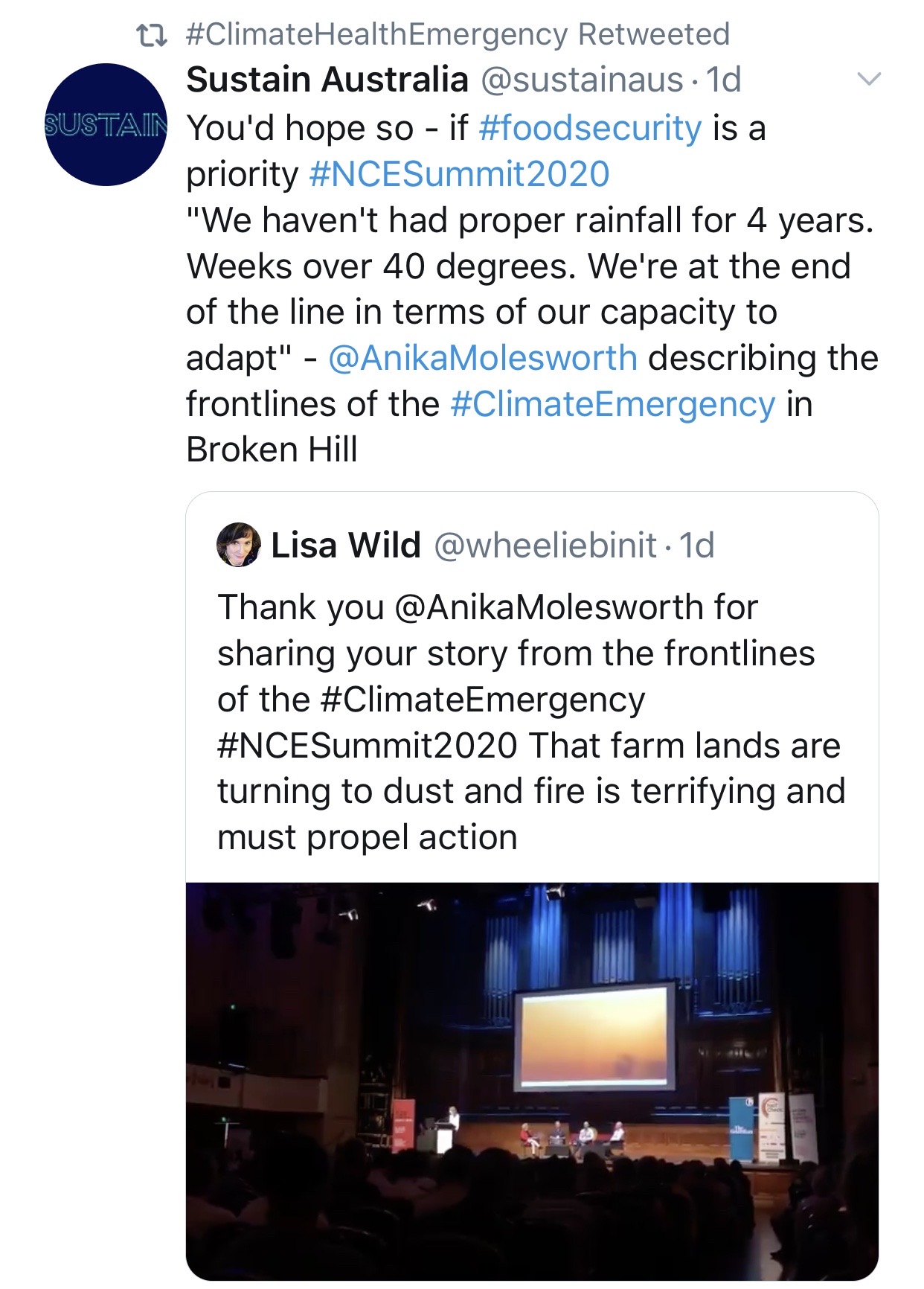 Armstrong also highlighted this excellent thread of a presentation by ANU environmental researcher, Dr Rebecca Colvin, on the current status of public opinion on climate science, and communications.

And here’s some further tweets from the event. 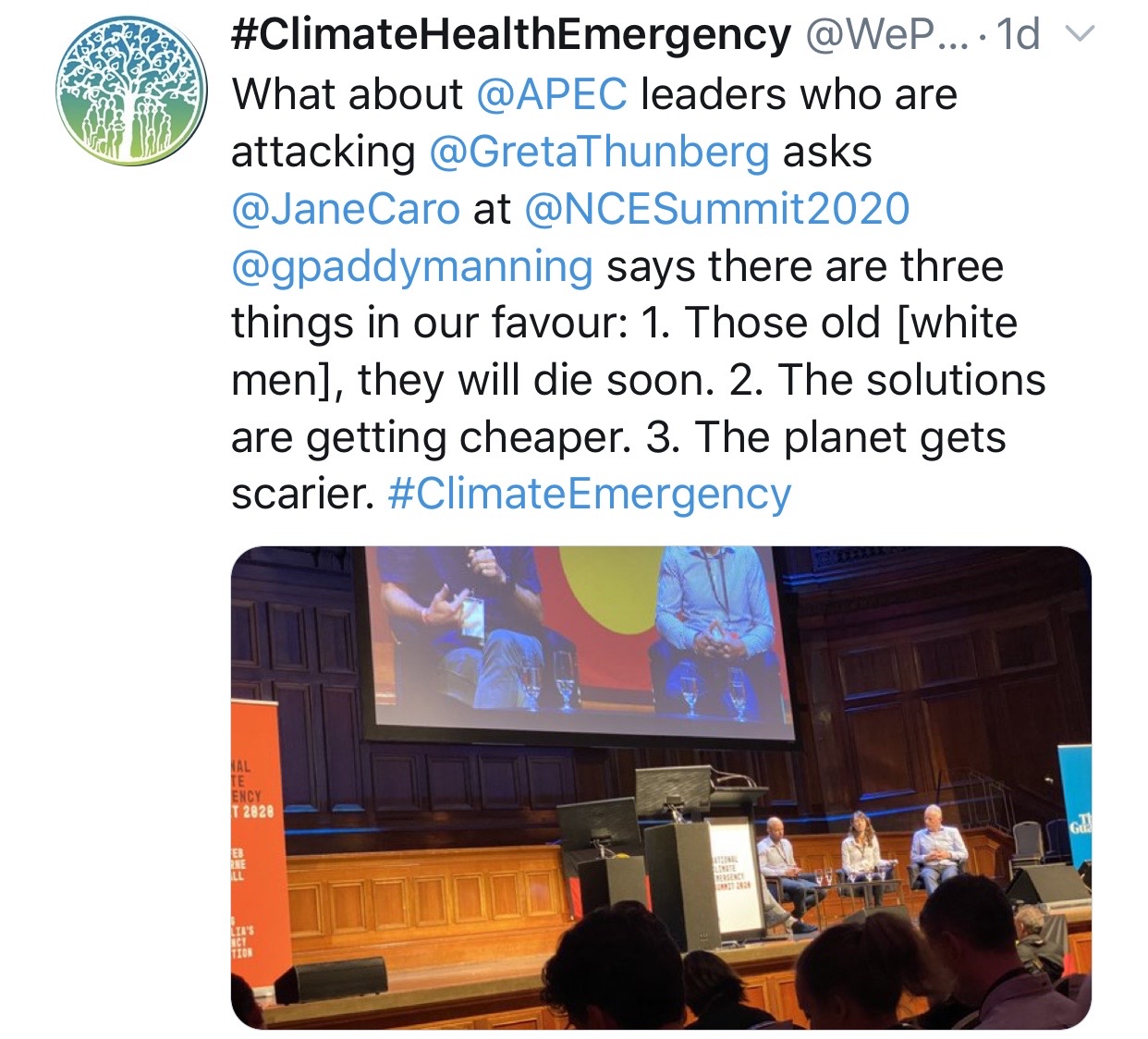 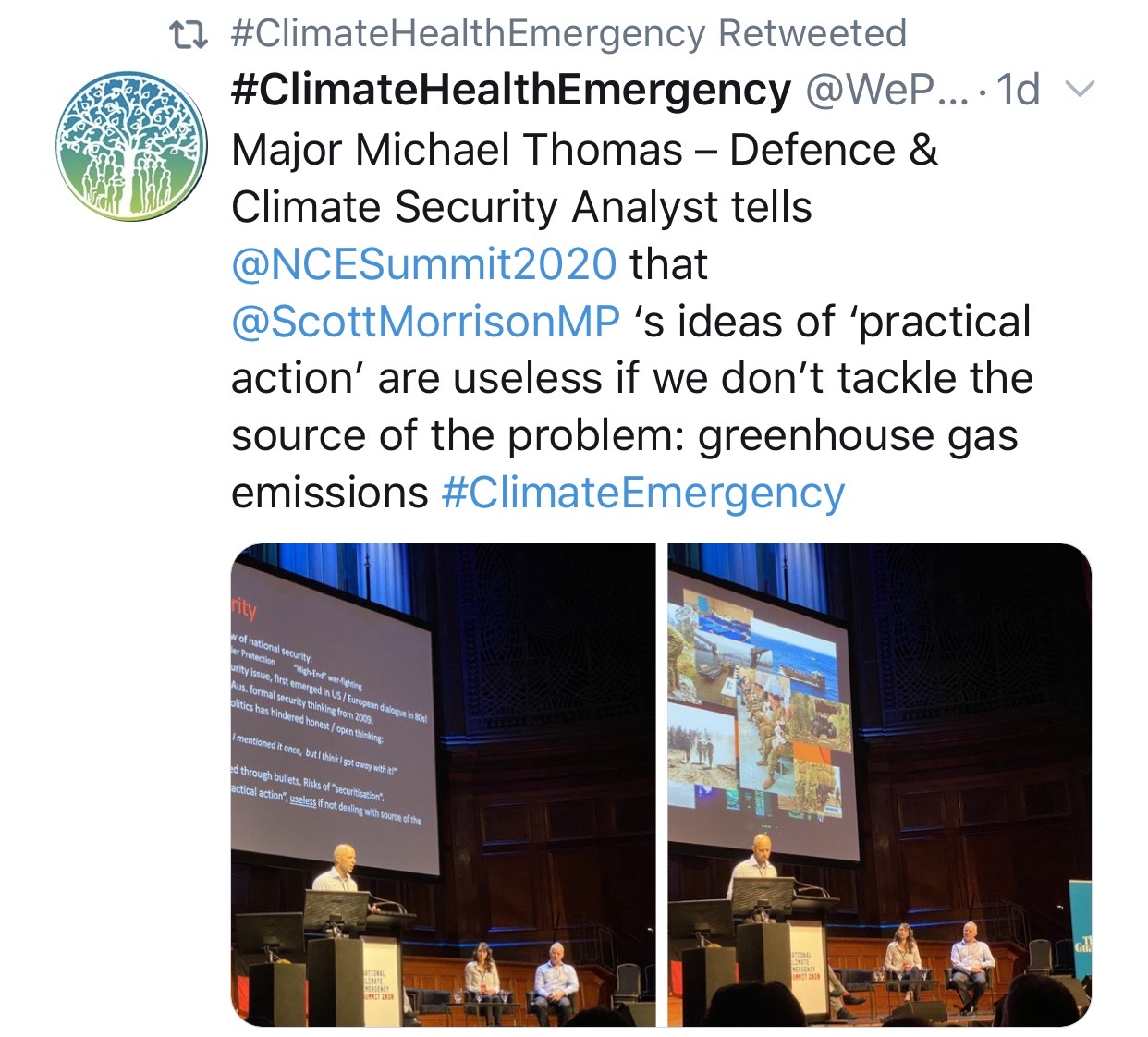 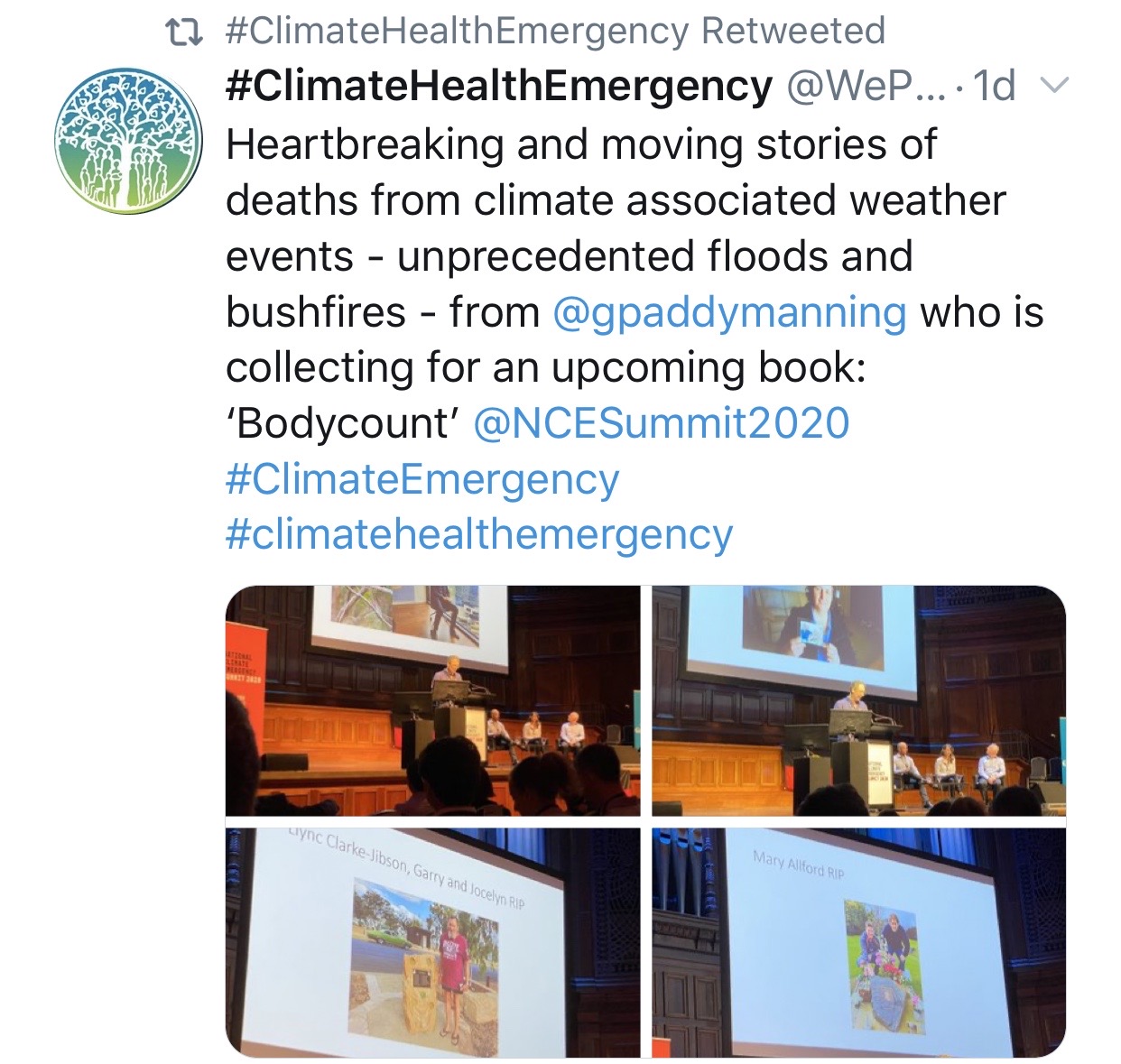 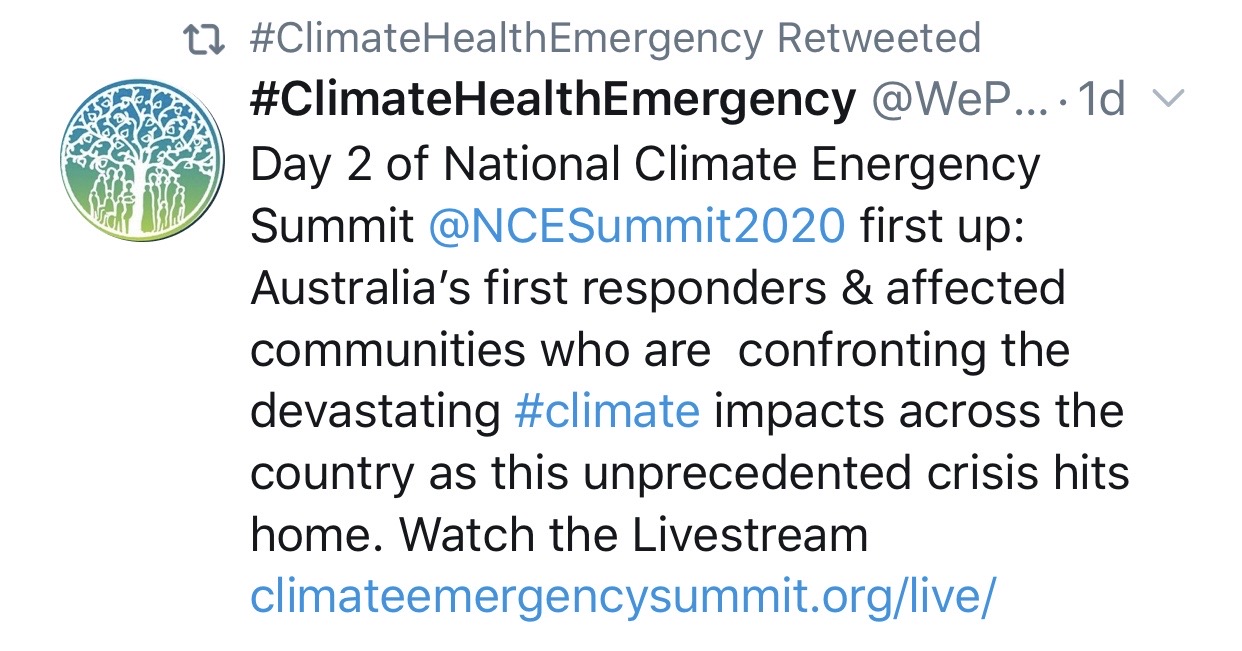 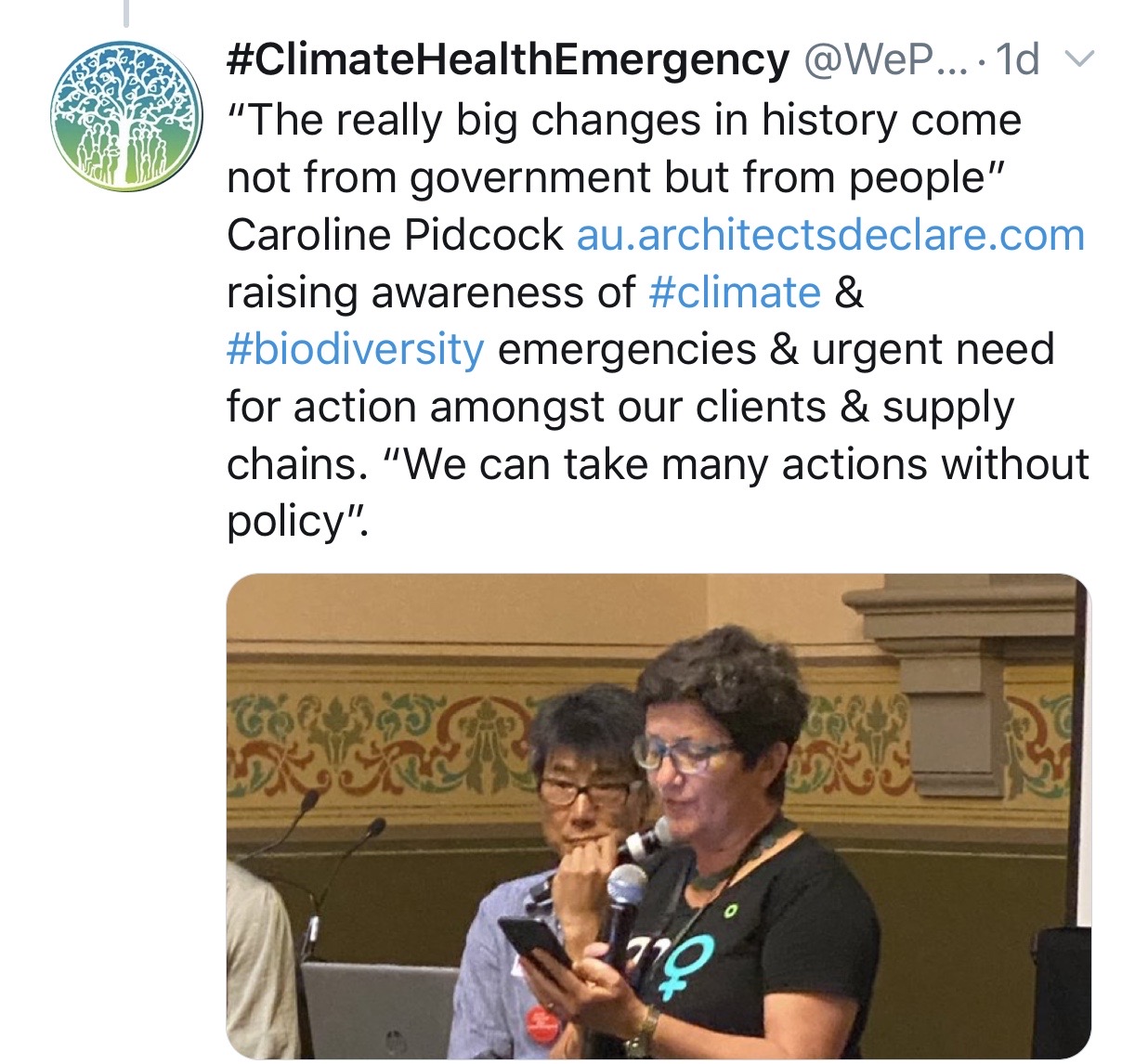 PrevPreviousPlaying our part in the fight against the novel coronavirus in the Pacific
Next‘Our Mother is Crying’: a poemNext