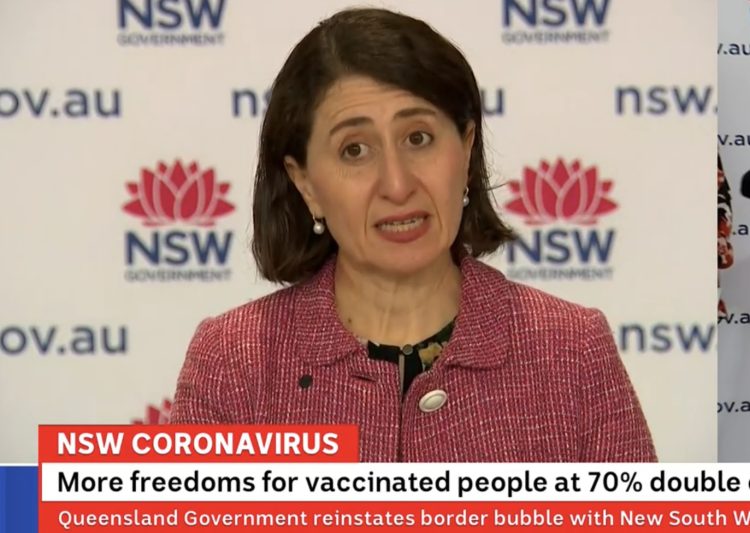 Introduction by Croakey: Grave concerns have been raised about the implications for Aboriginal and Torres Strait Islander peoples’ health of the “Roadmap to Freedom” released yesterday by the NSW Government.

Under the plan, stay-at-home orders for adults who have received both doses of the COVID-19 vaccine will be lifted from the Monday after NSW passes the 70 percent double vaccination target.

When NSW hits the 80 percent double dose target, the Government intends to ease further restrictions around international travel, community sport, major events and other areas. (Read more about the plan here, and also see details of the impending lifting of lockdown regulations in parts of regional NSW).

Aboriginal health leaders in NSW, the Northern Territory and other jurisdictions are calling for public health orders to remain in place until at least 90 percent of Aboriginal and Torres Strait Islander people are vaccinated.

The Government today announced that it will no longer hold daily COVID-19 press conferences, with updates to come from NSW Health, and the Premier and Health Minister to hold press conferences “on a needs basis”.

NSW should not open up until more than 90 percent of Aboriginal and Torres Strait Islander people in the state have been vaccinated, according to a senior Aboriginal public health expert.

Dr Peter Malouf, Executive Director of Operations at the Aboriginal Health and Medical Research Council of NSW (AH&MRC), said there was widespread concern among Aboriginal communities and medical services about the push to ease COVID restrictions.

“I just don’t know why they [the Government] aren’t listening to mob on the ground who are fearful of opening up,” he told Croakey.

His concerns come as three Aboriginal people have died during the outbreak in western NSW, with reports of large numbers of cases among families. The Guardian reports that in the remote community of Enngonia, almost one-third of the Indigenous population has been infected.

Many of the LGAs about to open up, including on the north and central NSW Coast and at Tamworth, included large numbers of Aboriginal people, said Malouf, a Wakka Wakka and Wuli Wuli man.

He called on NSW Health Minister Brad Hazzard and Chief Health Officer Dr Kerry Chant to meet with the AH&MRC and other peak Aboriginal groups in NSW.

He said the lack of communication from the Minister and CHO was disappointing. “They need to sit down and listen to our concerns, and have the decency to have the conversation,” he said.

The AH&MRC had not been invited to meet with the Minister or CHO since the COVID crisis began to hit Aboriginal communities. “It’s just ridiculous,” Malouf said, adding that the lack of partnership undermined confidence in the integrity of the National Agreement on Closing the Gap.

Next Monday (13 September), the AH&MRC and representatives of some Aboriginal medical services are due to appear at a NSW Parliamentary inquiry into the NSW Government’s management of the pandemic.

As well as dealing with the acute crisis, Malouf said the NSW Government needed to be engaging with communities to support their social and emotional wellbeing and address the social determinants of health, such as poor quality housing and food insecurity, that had been highlighted by the crisis.

“Aboriginal Community Controlled Health Services are doing amazing work,” he said. “Their tireless commitment to their communities is outstanding but mob are burning out and experiencing vicarious trauma seeing family members suffering.”

“A target of a 90-95 percent vaccination rate for all Aboriginal Territorians 12 years and older is required if we are to prevent or minimise the deadly toll of COVID in our communities,” AMSANT CEO, John Paterson said in a statement released on 9 September.

“The national target of 80 percent vaccinations of eligible adults 16 years and older would be a disaster in our communities, which have a much younger age profile and would equate to only about 55 percent percent of the total Aboriginal population vaccinated,” Paterson said.

“At that level the virus would rip through our community like wildfire. With one of the world’s highest rates of chronic disease and very overcrowded housing, we cannot risk the devastation this would cause.

“We only have to look at western NSW where our countrymen are suffering. Our hearts go out to them.

“There is, for example, a single Aboriginal family in western NSW that has infected 40 family members. With uncontrolled infections in other states we are in an emergency situation with a small window of opportunity before the virus enters our borders, to accelerate our vaccination program and ensure our communities are prepared when the virus comes.”

As reported previously at Croakey, the Australian Indigenous Doctors Association has also called for a 90-95 percent vaccination rate for Aboriginal and Torres Strait Islander people before Australia.

Minister Hazzard visited Walgett in the state’s north west this week, and faced strong calls for action from the Dharriwaa Elders Group, who said they were “extremely worried  and angry” about the Government response to COVID in Aboriginal communities, in Walgett and nearby “where every day we are seeing new cases”.

“It didn’t have to come to this,” the group said in a statement on 8 September.

“We would not be in this situation if governments had listened to Walgett’s Aboriginal Community Controlled Organisations and prepared appropriately for this emergency, in the decades we have been calling for more infrastructure and resources for community-controlled services and in the 18 months since this pandemic began.”

The Dharriwaa Elders Group called for:

1. Action to address staff shortages. We fear shortages of staff in the hospital, NSW public health system, Walgett Aboriginal Medical Service and our own service will lead to preventable deaths in Walgett.

2. Information and accountability around vaccination rates for Aboriginal people. Just as we need transparent data about transmission and testing, we need data about vaccination rates. It’s not enough for governments to keeping tell Aboriginal people to just get vaccinated, we have to make
sure that vaccines are available and accessible to everyone and we need clear up to date information every day on where, when and how people can get vaccinated across NSW, their Aboriginality and age range by postcode. We also need clear coordination and documentation of vaccination between agencies.

3. Timely information about places of concern. The community, including our frontline workers need to know when to isolate and when to get tested as soon as possible. This information is arriving too slowly to Walgett.

4. People in and leaving custody. We fear for community members in prison and returning from custody, and their families. Clear information is urgently needed about COVID testing and protocols for people leaving custody, and resourcing for post-release accommodation is critical to ensure
people returning from custody and their families can all be kept safe. We also need to stop the flow of people on remand or short sentences going into custody where COVID is spreading.

5. Clear information about public health orders. Community members fear leaving their houses in case they are fined by police, yet many are suffering lockdown with large families in small houses. Police and NSW Health need to clearly communicate with the community and young people in
particular how they can safely and lawfully be outside for exercise and recreation.

6. Fines for vulnerable community members. Public health is not served by police issuing fines to people who are homeless or who have mental health issues or cognitive disability in our community. As a community we need to look out for and support those who are struggling at this
time, including those who do not have a home to isolate in.

7. Investment in housing. We know of at least 21 individuals who are currently homeless in our community. Hundreds of people (at least 32 Walgett households) live in large multigenerational households because there has not been sufficient investment in housing in Walgett. This need has been documented over many years and all governments are aware of it. The pandemic has made more obvious the risk to public health of homelessness and overcrowding. 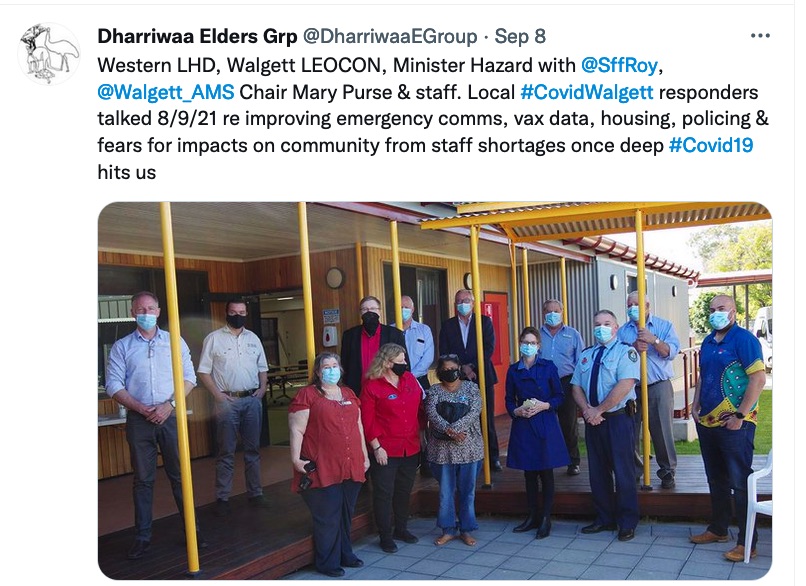 The Dharriwaa Elders Group called urgently for the immediate expansion of staff capability for Walgett and other hospitals in the Western Local Health District so that COVID patients can be treated On Country wherever possible and staff can be kept safe and rotated through isolation.

They also want emergency staffing for Dharriwaa Elders Group’s service, more trained nurses able to give vaccines to support the ongoing vaccination work of Aboriginal Medical Services in Walgett and other western NSW communities, and support for mobile testing and vaccination options led by Aboriginal Medical Services that can visit people in their homes where needed.

They also called for the immediate provision of emergency housing for people who are homeless, returning from custody or who need to isolate to protect further transmission of COVID in our community.

“We are doing all we can to protect our communities and we need governments to step up and do everything they can too,” they said.

Read more calls to action from the group here.

A joint statement by the Federal and NSW branches of the Australian Medical Association (AMA) warned that NSW was opening up when case numbers remained too high.

However, the statement does not explicitly take an equity lens or examine the risks for people most at risk from either COVID or general healthcare being unavailable because of health systems being overwhelmed. 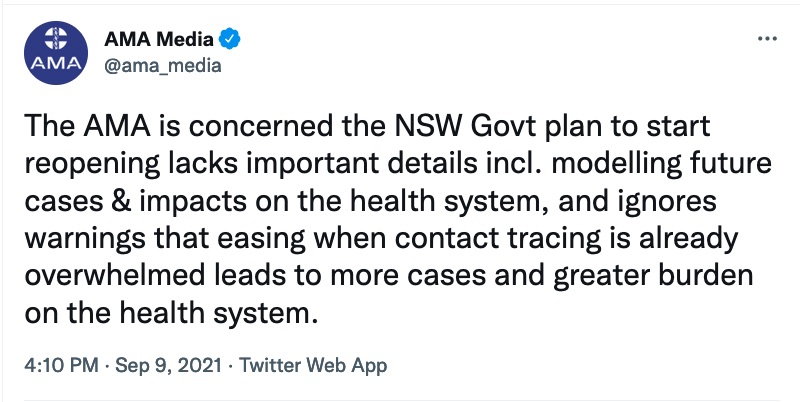 This week, intensive care nurses have also gone public about the risks to their patients from system overload; however, it’s important to also consider the implications for the entire health system, including primary healthcare and for at-risk populations, such as people in prisons. 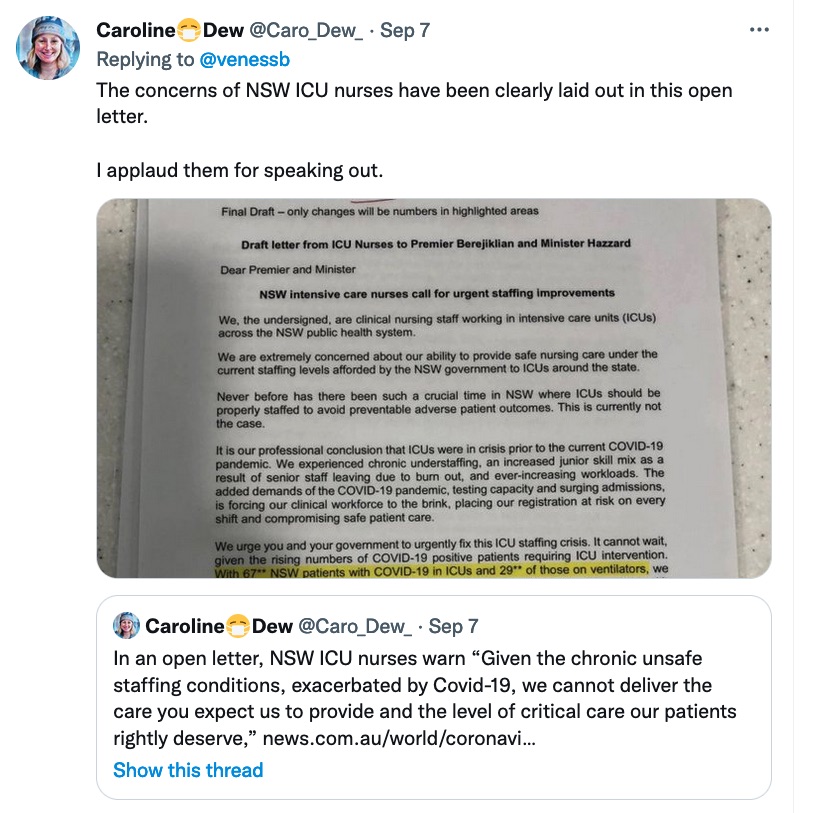 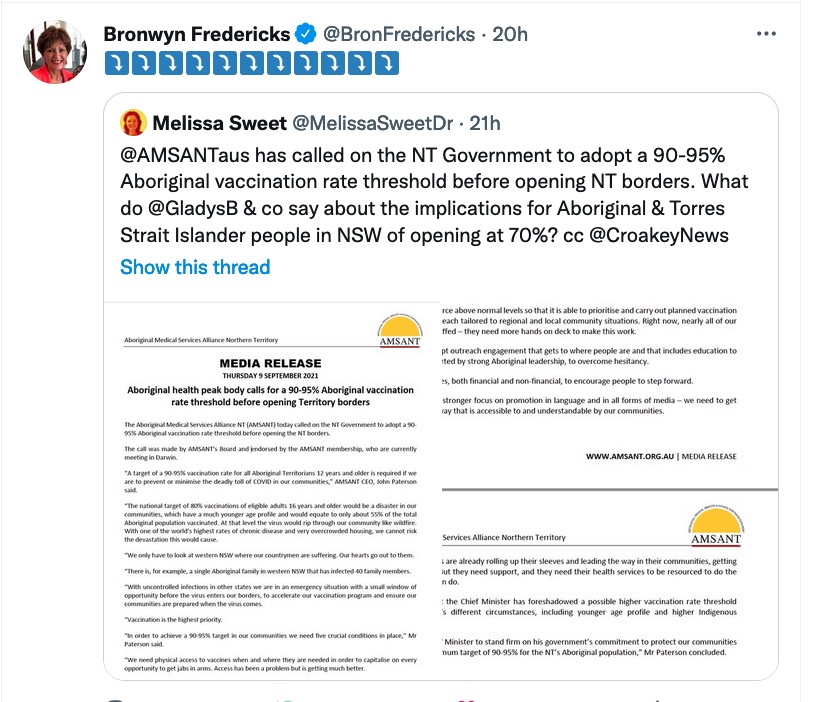 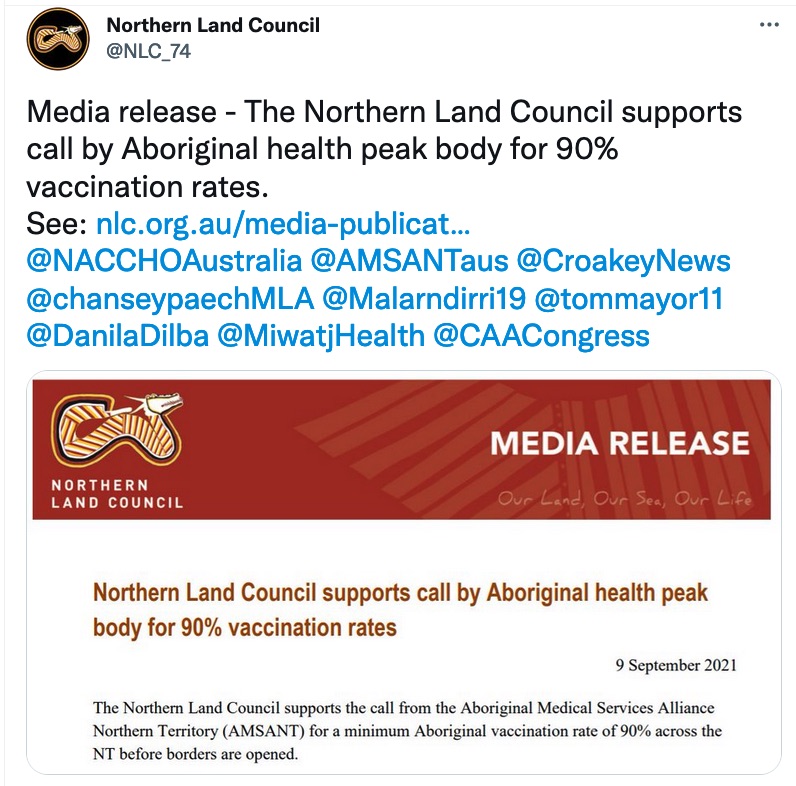 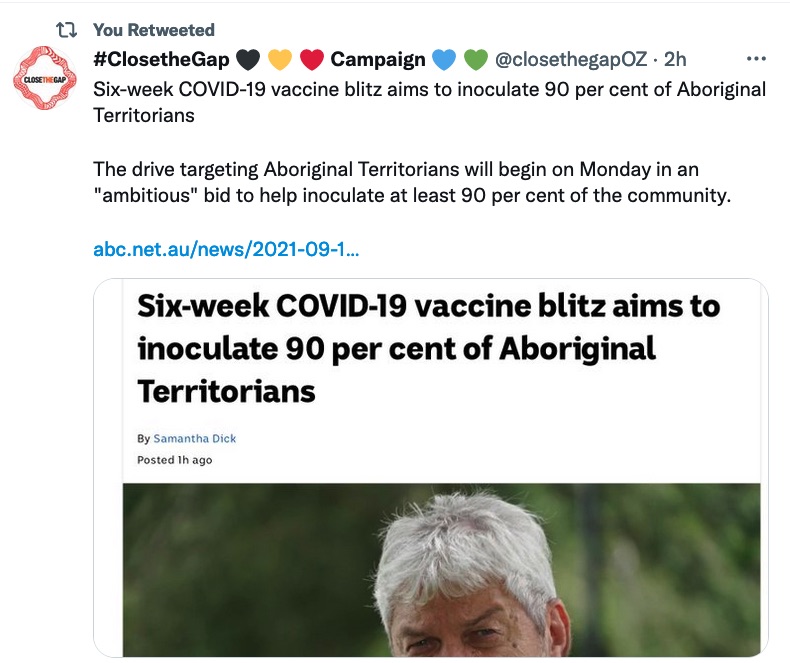 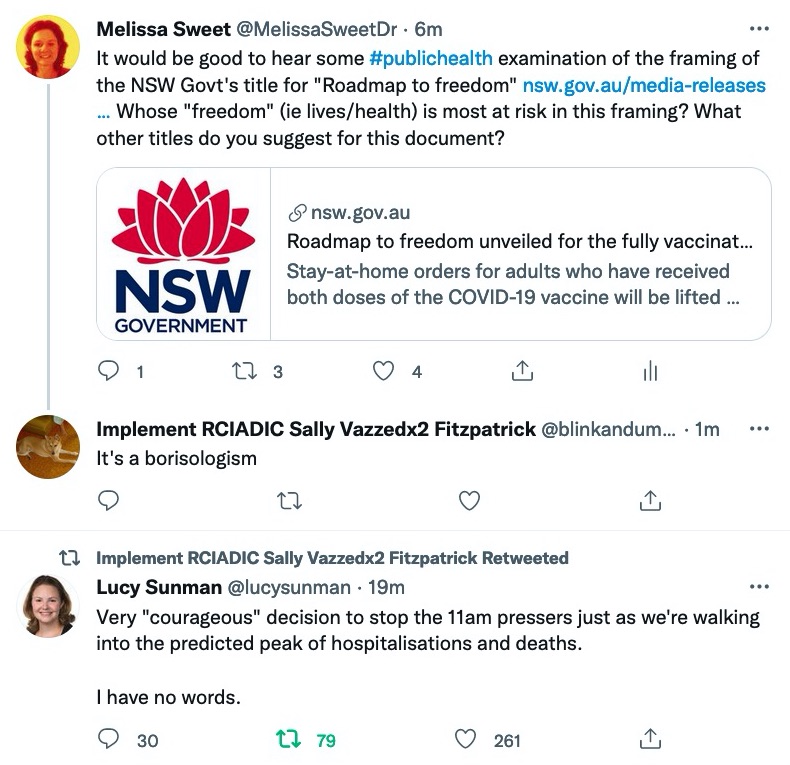