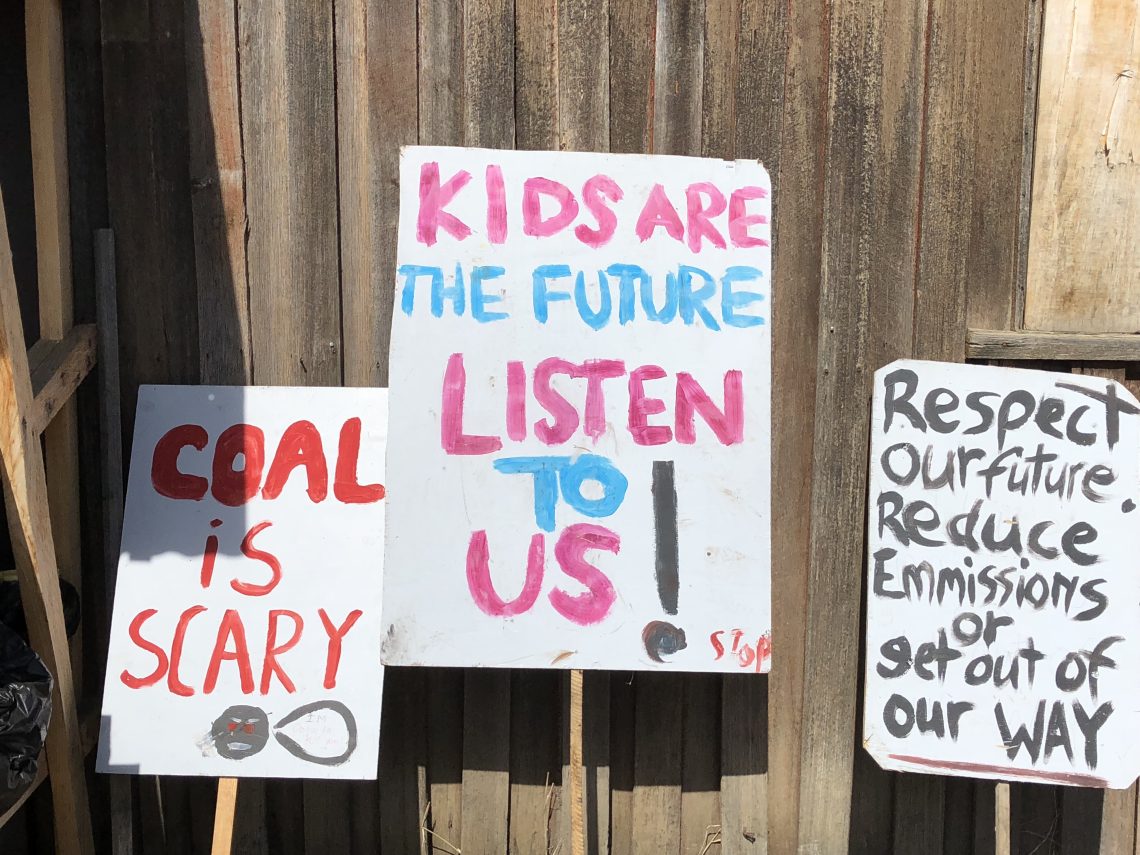 Signs from a climate rally, lutruwita/Tasmania, 2019. Photo by Mitchell Ward

Amid climate and pandemic crises, it’s more important than ever to hear from young people

Swedish climate activist, Greta Thunberg, who recently accepted an Honorary Membership of the United Kingdom Faculty of Public Health, has shown extraordinary leadership, as have many young Australian activists, including the Indigenous group, Seed Mob.

However, the voices and aspirations of young people should also have far greater prominence in responses to the other public health emergency we are facing with COVID-19, reports Croakey journalist Marie McInerney.

Roxxanne MacDonald has mostly felt like an “outsider to be dealt with later” through much of the COVID-19 pandemic in Australia.

“Young people are often the last group to be thought of [in such conversations] because many people think they don’t have health issues,” says MacDonald, a 24-year-old student from the Sunshine Coast in Queensland, and a member of the Consumers Health Forum of Australia’s Inaugural Youth Forum and a CHF board member.

“But that’s certainly not the case at all.

“I think young people always knew that the future for them was never going to be stable because of climate change and the lack of climate action, and now COVID has come and shown us, ‘this is what happens when your life is destabilised’,” she told Croakey this week.

The sidelining of young people was also evident in the Federal Government’s 2021 Intergenerational Report, released last week with a focus on how demographic, technological and other structural trends may affect the economy and the budget over the next 40 years.

Prepared every five years and postponed last year because of COVID, the report made plenty of headlines.

But to the frustration of George Patton, Professor of Adolescent Health Research at the University of Melbourne and Murdoch Children’s Research Institute, it barely mentioned the issues facing the generation of young people that Australia will rely on over those coming decades.

It made little comment on young Australians “beyond noting they make up a smaller proportion of the population than ever before”, he told Croakey.

By contrast, as Patton also wrote this week at The Conversation, there was far less media attention for Australia’s Youth, the first national report on young Australians in a decade, published by the Institute of Health and Welfare (AIHW) around the same time – a “striking” lack of interest in the midst of the coronavirus pandemic.

“If you actually look at the major determinants of what our economic future is, in terms of the parameters of the Intergenerational Report, whether it be population growth, productivity, participation in the labour market, it’s all about today’s youth and their transition to adulthood,” Patton told Croakey.

“That transition has been getting more difficult for decades,” he said. 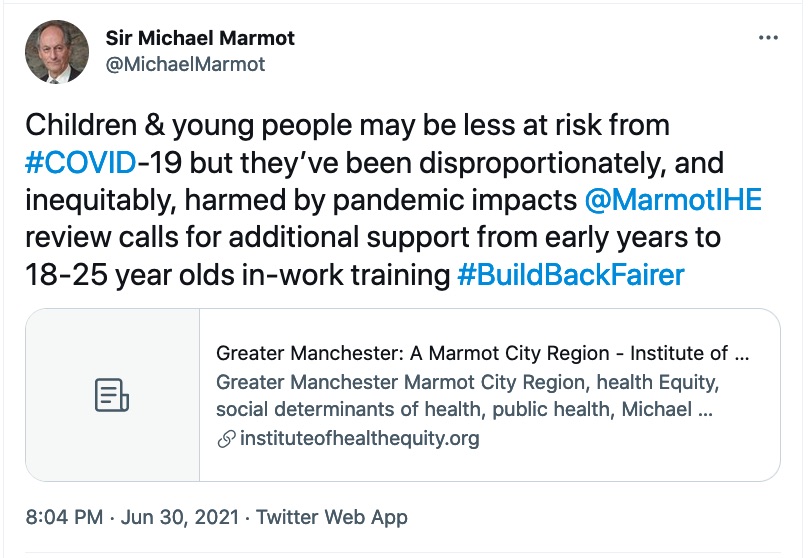 Patton is a psychiatrist and epidemiologist who has worked with the World Health Organization and United Nations bodies around child and adolescent health.

He is one of 30 signatories to a March 2021 letter to the editor of the BMJ, led by former New Zealand Prime Minister Helen Clark and WHO Director-General Dr Tedros Adhanom Ghebreyesus, which says the current generation of adolescents globally is “at risk of inheriting a world blighted by climate change and scarred by COVID-19”.

“Although they have been spared the most severe direct effects of the pandemic, the indirect effects on their wellbeing are devastating,” states the letter. It says young people are experiencing disruptions to their access to health, education, and preventive services, and the pandemic has further exacerbated inequalities.

The letter cites an editorial, titled “Generation coronavirus?” published in mid 2020 by The Lancet that observed:

Today’s children are digital natives born after the turn of the 21st century, who inhabit a planet in crisis and now will inherit the unknowns of a pandemic aftermath.

This roiling milieu offers a moment in which a new agenda for health could emerge with children and adolescents at the centre, which could determine if this generation – Gen C –will be defined and confined by the losses from COVID-19.”

This is the space that the Intergenerational Report should be working in, according to Patton.

He says the future for young people is being shaped not just by COVID-19 and climate change, “the greatest threat of this generation”, but also the tumultuous changes in the labour market, in Australia and globally.

As the UK abandons public health restrictions such as mandated mask-wearing, Professor Devi Sridhar, Chair of Global Public Health at the Edinburgh University Medical School, warns that the “next jump” for the coronavirus, in an environment with the highly transmissible Delta variant, may be those younger than 18.

The ABC has reported that 250,000 children in Indonesia have been infected with COVID-19 — 12.6 per cent of the total cases, and 676 children have died from the virus, about 1.2 per cent of total deaths. “Alarmingly,” it said, “50 per cent of the children who died were under five years old.”

In Australia, chaotic communications about vaccinations for people aged under 40 have added to the stress and uncertainty facing young people, amid debates about vaccination of children, and how best to roll out such a program. New South Wales Chief Health Officer Dr Kerry Chant warned today that, of the 37 people currently in hospital with COVID-19 in the state, 14 were under the age of 55, and eight were under 35.

The US is immunising children between 12 and 15 and may go younger next year, while Israel is considering a single dose for adolescents, and the UK has decided not to vaccinate children under 18 just yet.

Decisions about vaccination of children in Australia must “be fuelled by the data”, says Associate Professor Holly Seale, an infectious disease social scientist at the University of New South Wales.

“How many studies right now do we have that have actually surveyed or interviewed young people about their receptiveness to getting vaccinated, about their level of understanding, concerns and feelings about vaccine, and also the drivers: why would they make a decision either way?” she asked.

“We make so many generalisations at the moment about different communities without drawing on the data, and I hope that’s a lesson that’s been learnt by now before we widen the scope of this (vaccination) program.

“We need to start capturing the attitudes of these populations before we go after them,” she told Croakey.

For children and young people, the impacts of COVID-19 are wide-ranging, and both immediate and long-lasting.

In the United States, clinics and research projects have been set up to investigate concerns about long COVID in children .

Prolonged school closures across many regions – in the Philippines, schools have been effectively closed for 18 months – as well as COVID-induced poverty is leading to many girls giving up their education.

It’s “a reversal of progress that’s been hard fought over decades in terms of the status of girls and young women”, says Patton.

In Australia growing underemployment, the rise of the gig economy, housing unaffordability, and rising student debt were already, pre-COVID, raising the question “as to whether this generation will be the first to be less well off than the previous”, he said.

“And now we’ve had COVID-19 come along, to disrupt absolutely everything,” Patton said.

Australia’s Youth has a separate section on COVID-19 and the impact on young people, which says “the social and economic impacts on young people have been substantial”.

The report lays out some of the financial, physical, mental and social impacts of COVID-19 on young people to date, including:

The AIHW report said the impacts of COVID-19 on young people were complex, not yet fully understood and likely still emerging.

“The effect of COVID-19 can also be dynamic – outcomes change quickly (for instance, mental wellbeing and social connectedness) when conditions change (such as introducing or easing restrictions),” it said.

The report noted that many life trajectories are set in place during adolescence and young adulthood, so we need ongoing comprehensive monitoring of the impact of COVID-19 on young people’s wellbeing. It highlighted particular areas of interest:

Patton warns we need to monitor these concerns closely.

“In the short term we need to track the effects of the pandemic on Australia’s youth as best we can,” he said. “In the medium term, we need better data systems on how today’s young Australian’s are meeting the diverse challenges facing this generation.“ 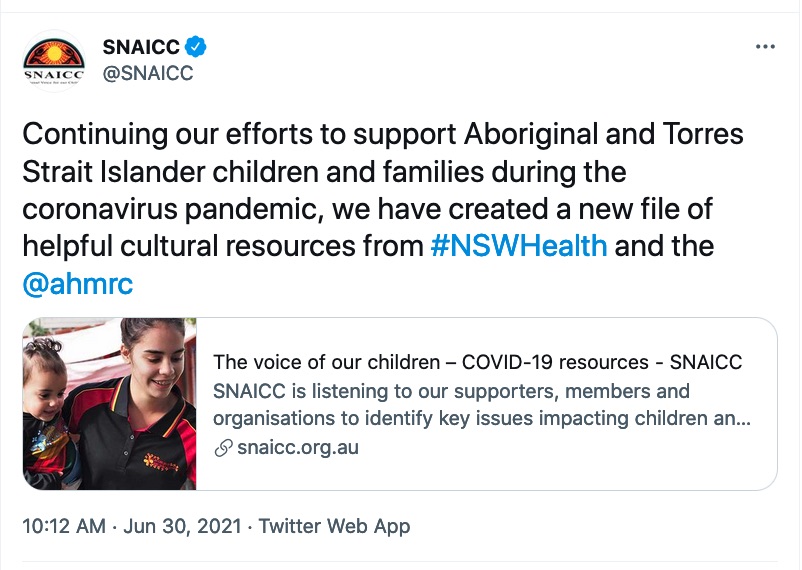 Not surprisingly the mental health impacts of COVID-19 and its associated lockdowns may be higher in Melbourne, which was locked down for 112 days during its second wave last year.

Announcing interim funding for support last August, the Federal Government cited data showing there had been a 33 percent rise in children and young people in Victoria presenting to hospital with self-harm injuries over the previous six weeks, compared to a year earlier.

In research yet to be published, George Patton’s colleagues at the Murdoch Children’s Research Institute are investigating a worrying “steady increase” in mental health presentations to Victorian public emergency departments by people under 18, from the first national lockdown in March 2020 until the end of Victoria’s second wave response in October 2020.

Those numbers are particularly driven by self-harm and development behavioural disorders relating to autism or ADHD, with increases in eating disorders and anxiety and mood disorders, and worryingly include under 12s, said Professor Harriet Hiscock, consultant paediatrician and Director of The Royal Children’s Hospital Health Services Research Unit.

Hiscock told Croakey that researchers are waiting on the release of more recent data from the Victorian Government – “which is somewhat frustrating when you’re trying to be agile in your policy thinking and responses” – and are concerned by anecdotal evidence that the rise in acute presentations has continued beyond Victoria’s long lockdown.

Time will tell as to whether those numbers will come down to pre-COVID levels, but she expects that “relies on us getting back to as normal as life as possible, which particularly for children is back to school”.

Hiscock said the MCRI is now running a trial to build skills through a community of practice in Melbourne for GPs, paediatricians and psychologists who look after mental health in children.

“We don’t have a workforce we can suddenly pull out to support all these kids, so what we can do is upskill existing workforces to help them better manage child mental health,” she said.

The Stronger Futures Centre for Research Excellence, led by the MCRI and the South Australian Health and Medical Research Institute (SAHMRI), has also recently published two policy briefs on young people’s experiences of the pandemic and on mental health. 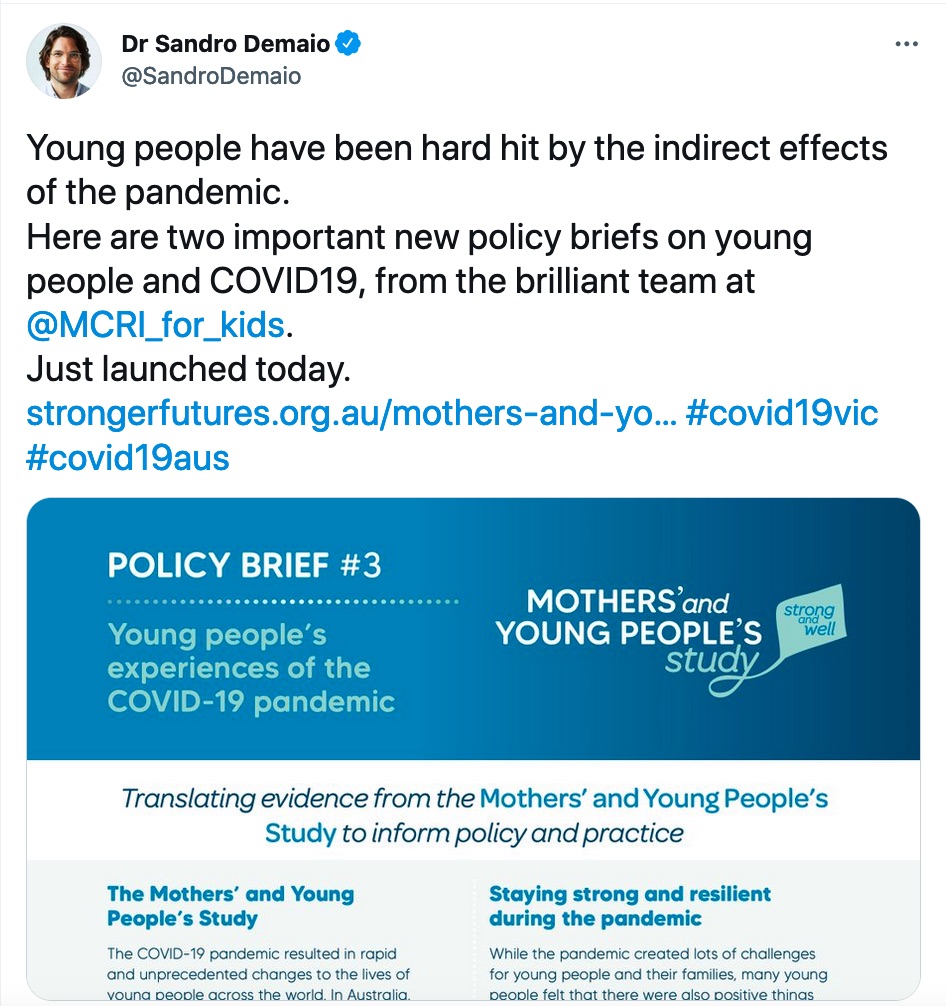 PrevPreviousPutting the spotlight on lethal gaps in health services for a remote community and prison
NextIs it more infectious? Is it spreading in schools? This is what we know about the Delta variant and kidsNext