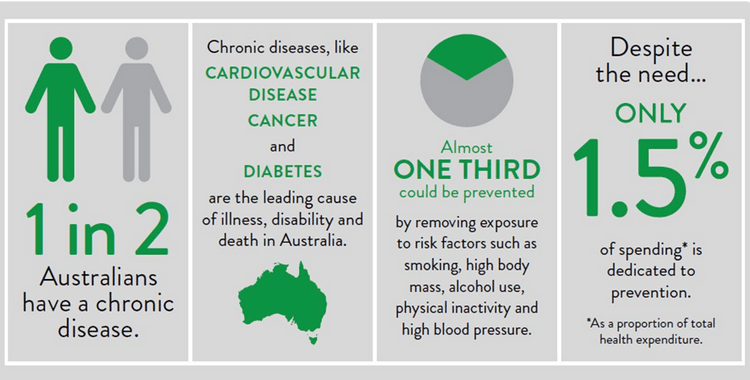 The Australian Health Policy Collaboration (AHPC) at Victoria University today released Australia’s Health Tracker –  a snapshot of Australia’s health in terms of preventable chronic disease and conditions, and their most common risk factors.

As expected, the news is not good – as the headlines are showing, the inaugural report card shows we are one of the most obese nations in the world, with increasing rates of high blood pressure, high cholesterol and diabetes, and a record high suicide rate.

See the links to the full reports here, and some key graphics above and below, as well as responses on Twitter to the release at the bottom of the post.

But the verdict on Australian governments is also poor and has prompted renewed calls from public health groups to get tougher with the food industry and impose, among other things, salt limits in processed foods, more restrictions on junk food marketing, and a sugar tax.

(While it’s not clear yet how the new government will look and what the new Senate crossbench might mean on many health policies, public health may have lost one of its most fervent opponents in crossbench Senator David Leyonhjelm who drove a Senate inquiry into the “nanny state” and may not be returned after the double dissolution).

More than 50 health organisations worked together on Australia’s Heath Tracker – the first assessment of its kind – in an effort to warn governments and industries that immediate and significant action is needed to fight diseases crippling the health system.

It uses health targets and indicators set by the collaboration to help Australians reach World Health Organisation’s 2025 targets to improve health around the globe.

AHPC Director Rosemary Calder noted two crucial factors: that one-third of the disease burden is preventable but that investment in preventive health in Australia in 2013-14 was 1.5 per cent of the national total recurrent health expenditure – way below New Zealand (6.4%), Finland (6.1%) and Canada (5.9%).

In this article at The Conversation,  Calder and co-authors Rebecca Lindberg and Maximilian de Courten said the Health Tracker shows the urgent need for steps such as:

Calder said there was some good news: smoking rates and risky alcohol intake has fallen and there have been fewer deaths from cardio-vascular disease, stroke and common cancers recorded, but that only underlined the failure to act inother areas.

“These falls are masked by frustration because it shows we can change our alarming trajectory but government, industry and community need to take the lead.”

“We hope that Australia’s Health Tracker will be a tool for action and accountability to protect the most important asset in our country – our health.”

While the Health Tracker doesn’t explicitly focus on the role of poverty and disadvantage, the authors say policies should focus on low-income and Indigenous populations who are at greater risk and the report points to a set of core principles (see pic, right). It says: 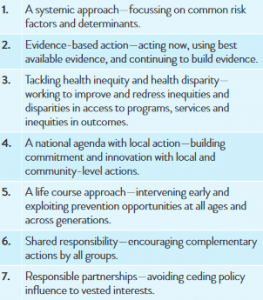 Action is required urgently to reduce the incidence and impact of chronic diseases, and must address the underlying risk factors and determinants. There is a critical need for a national prevention agenda.

Time to act on promises

The Public Health Association of Australia CEO Michael Moore welcomed the report as a timely wakeup call for government. He said:

A lot of promises were made before the election to fight chronic disease. What we need to see is action from the elected Government as this issue is affecting half of the population. This isn’t about who is right, it’s about doing the right thing for the country and improving the overall health of the Australian people.

This research is the first of its kind and should be taken as not only a warning but as a call to action to the Government. PHAA has outlined what can be done: a sugar tax on soft drinks, ban on alcohol advertising and continued investment for the health star rating. Let’s keep our current and future generations healthy by investing in prevention as well as cure.

Failure to invest is a political choice

With the exception of continued tobacco control, the data suggests there is little or no progress being made in preventing and controlling risk factors for chronic disease in Australia. Government concern should be growing further.

Failure to make progress in relation to harmful alcohol use, poor nutrition and physical inactivity is evidence of a failure to implement cost-effective policy  options. Political actors have been unable to translate their commitments to successful policy implementation, and the impact is on the citizens those actors represent.

The failure to invest in chronic disease prevention is a political choice.

Aspirational goals are commendable; however, empty promises alone will not ease the growing burden of chronic disease. To achieve a sustained commitment to the substantial challenge of combating chronic disease requires a rigorous and independent analysis to encourage and engage political will.

Tracking of progress towards the targets and indicators suggests Australia has become complacent and is unlikely to reduce the impact and incidence of chronic disease by 2025.

It is clear that Australian governments now have a chequered history of first agreeing to high-level ‘strategies’ only to retract on specific budgets or agencies required to ensure delivery.

They said benchmarking tools like the Health Tracker can and must also be a call to action for Australian citizens.

Australia’s Health Tracker is an unflattering assessment of our nation’s health that reminds governments of their political commitments and opportunities. It is not only the interest of government to honour this social contract. We, Australia’s citizens, must all point to where we want to go, and, what can be done to get there. We can demand and create healthier products, people and places to live and we can aim to ensure the next check-up is a more positive experience for all.

Croakey readers may also be interested in this timely article published on Monday at MJAInsight by lawyers Dr Belinda Reeve and Alexandra Jones, saying that the Federal Government has been slow off the mark addressing the challenge of creating a healthy, equitable and sustainable food system.

They say the then Labor Government rejected the most hard-hitting recommendations of the blueprint laid out in the 2008 report of the National Preventative Health Taskforce for addressing obesity and diet-related chronic disease, although made progress through the establishment of the Australian National Preventative Health Agency, dedicated funding to new, community-based prevention initiatives, and early work on a National Food Plan.

Unfortunately, they say, Australia went backwards again under the Abbott government, with the disbanding of the ANPHA, a $400 million cut in funding for state based prevention, and the revised  National Nutrition Policy yet to see the light of day.

They conclude that Australia’s food industry is “able to wield significant power in food and nutrition’s ‘regulatory space’, often at the expense of more effective regulatory measures to improve the accessibility of healthy foods and beverages, and encourage healthy eating.” That compares starkly, they say, with efforts of other countries, and they call for action on seven fronts, from a sugar tax to tighter urban planning to ease the density of junk food outlets.

See also this article in BMC Public Health on a systematic review that looked at whether interventions to promote healthy eating is equally effective for all, which concluded that interventions aimed at improving population health should be routinely evaluated for differential socioeconomic impact.

And Croakey contributor and Yorta Yorta woman Summer May Finlay has also been talking #nutrition on Twitter today as part of NAIDOC discusions at @wepublic health: 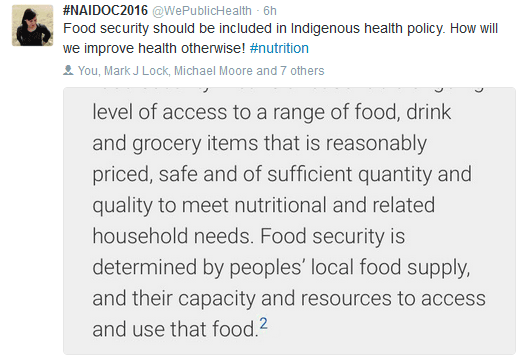