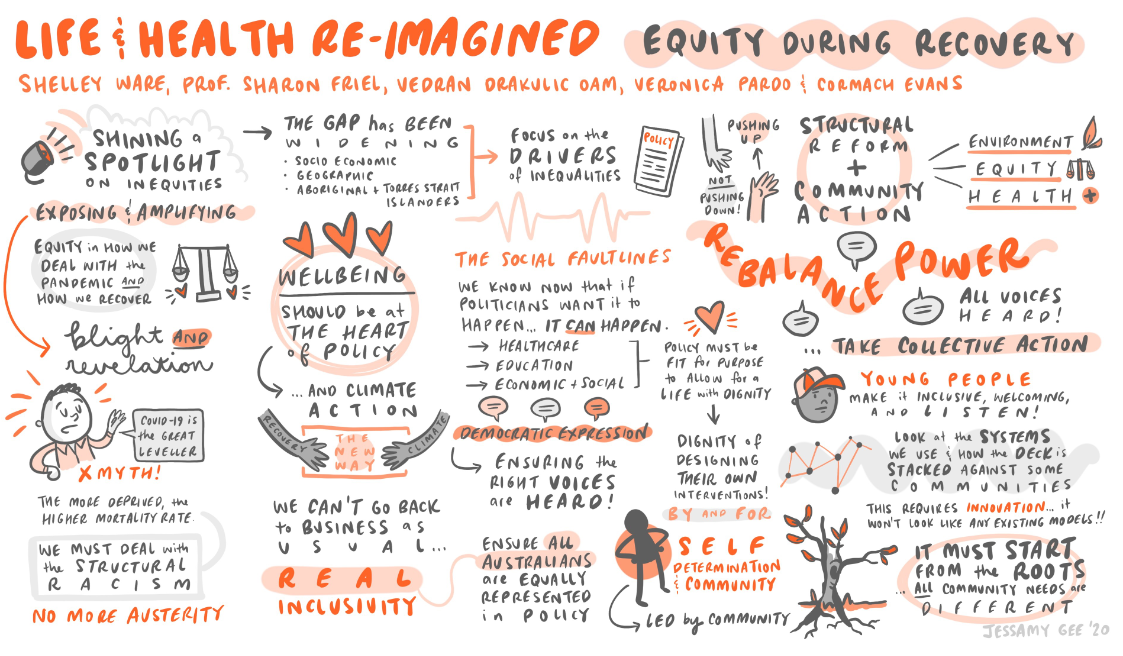 Build back better: climate and community are critical to equity in pandemic recovery

Community-led responses, the need to integrate climate action and economic recovery, and a determination to not go back to ‘business as usual’ are key to addressing social and health inequities exacerbated by the pandemic, a VicHealth webinar panel discussion heard this week.

The event took place while nine public housing towers in Melbourne were in the midst of a ‘hard lockdown’, illustrating important paradoxes being thrown up by the pandemic, said panelist Veronica Pardo, CEO of Multicultural Arts Victoria.

“While talking about vulnerability in communities, what we’re seeing again and again is strength, seeing how community is the key protective factor,” she said, urging reflection on “how things might have been different (with the Melbourne towers) if communities had been central in designing the response that is aimed at keeping them safe”.

Sir Michael Marmot, leading global advocate for action on the social determinants of health and health inequalities, opened the panel event, which was titled: Addressing social and health inequities as we emerge from lockdown (watch a recording here).

Marmot outlined the devastating impact of austerity policies on the United Kingdom over the past ten years, urging governments and societies not to return to ‘business as usual’ as they emerge from the pandemic, but to put the climate change and health equity agendas together and ensure wellbeing is at the heart of economic policy.

(Watch his address here, or read a transcript, as part of the Croakey Conference News Service’s ongoing coverage of the VicHealth Life and Health ReImagined series.)

Vedran Drakulic, CEO of Gandel Philanthropy, welcomed Marmot’s comments, saying his greatest worry is that governments seem “intent” on trying to get back to business as usual, rather than taking the opportunity to “build back better”, particularly on climate action.

Pairing economic recovery action with climate action at this critical moment, as the We Mean Business coalition has urged at the World Economic Forum, would be key to addressing health inequalities at all levels, Drakulic said.

Professor Sharon Friel, from the Menzies Centre for Health Governance at the Australian National University, outlined the key points of the paper she co-wrote for the event with Professor Fran Baum, from Flinders University’s Southgate Institute for Society, Equity and Health. 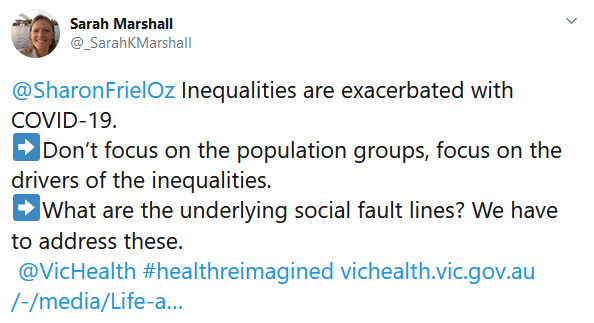 Like Marmot’s recent report on inequalities in the UK, their paper warns that, even before COVID19 began to inflict its disproportionate toll, inequalities in premature mortality for men and women had already widened across the socioeconomic gradient, and for rural, regional and remote areas.

“The message we take from that is: if politicians want it to happen, it can absolutely happen”, she said.

This demonstrated an ability to “hold social, economic and health goals together” and the need to think about governing in new ways: “what should government be working towards, what is the role of business, civil society in that”.

The panel’s overwhelming message was the need to “elevate and amplify” community voices, to ensure they are partners in the process of designing solutions that affect them.

Pardo said: “We’ve heard here about really ‘wicked policy issues’, intractable and difficult issues to move and yet we’ve got this untapped resource.”

Drakulic agreed on the need for communities to be at the heart of their own solutions, saying Australia may be a very successful multicultural society, but it was “nowhere near perfect”, as he had seen early in the pandemic amid efforts to translate all coronavirus health information into different languages.

“Simply translating a document, which is fine for a particular group of people, will not answer all the questions that the other community might have,” he said. “It has to be real inclusiveness, not just ‘we’ll talk to you when we need to talk to you’.”

He echoed the need for responses to come from the grassroots, saying the success of that had been seen first-hand in the work of Aboriginal community controlled health organisations, and in the trust that comes from allowing communities to engage in their own solutions, versus ‘one size fits all’ solutions imposed from above.

Evans said the pandemic has been very challenging for young Aboriginal people, including in the language used. He said:

‘Isolation’ is such a scary word for so many young people.

A lot of our young people are living in crowded houses, they don’t have the Internet, rely on connection to culture and country to support their health and wellbeing.”

And they can struggle with the education system, which too often is “not supportive or welcoming” for Aboriginal young people, from what they hear in history lessons to daily experiences of racism. He has been working with Victoria’s Commissioner for Aboriginal Children and Young People on ‘Our youth, our way‘, a systemic inquiry into the over-representation of Aboriginal children and young people in Victoria’s youth justice system, which will report to Parliament later this year.

“We need it to be listened to”, he said. 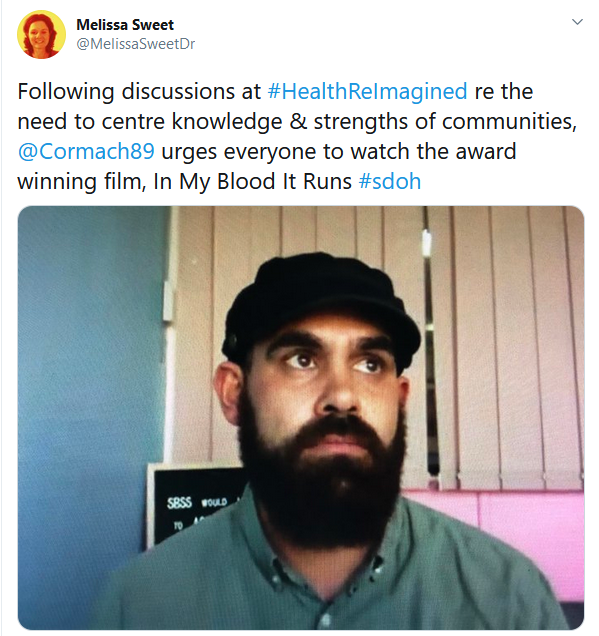 See more on the discussions via participants and observers on Twitter below. 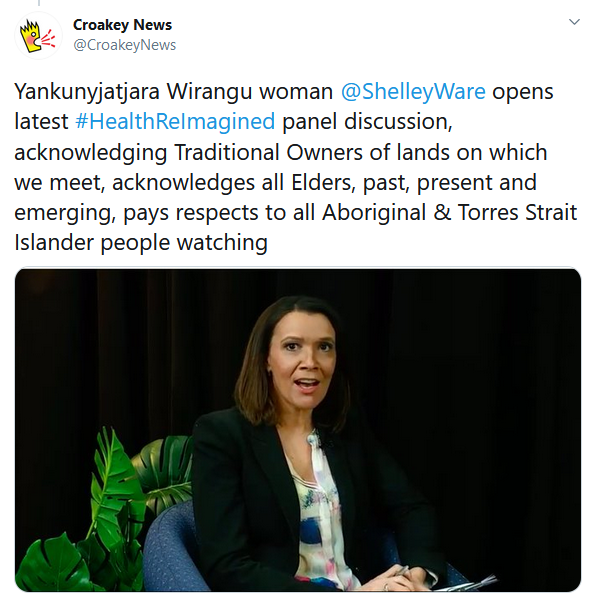 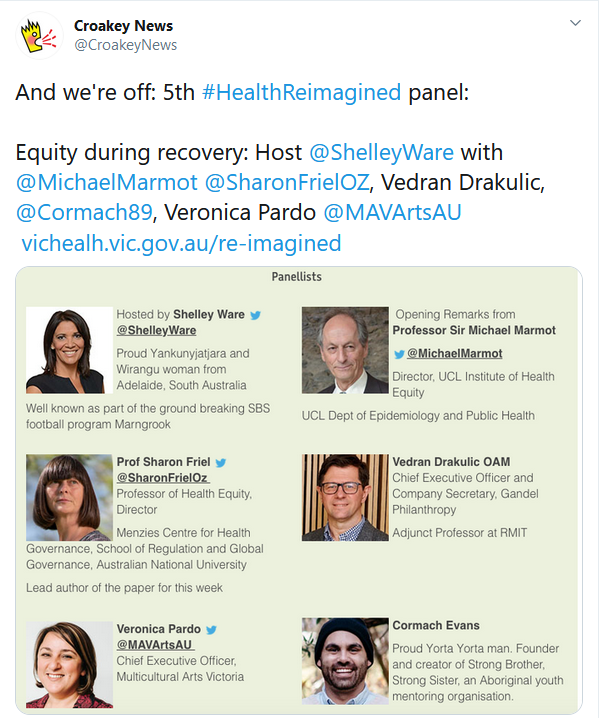 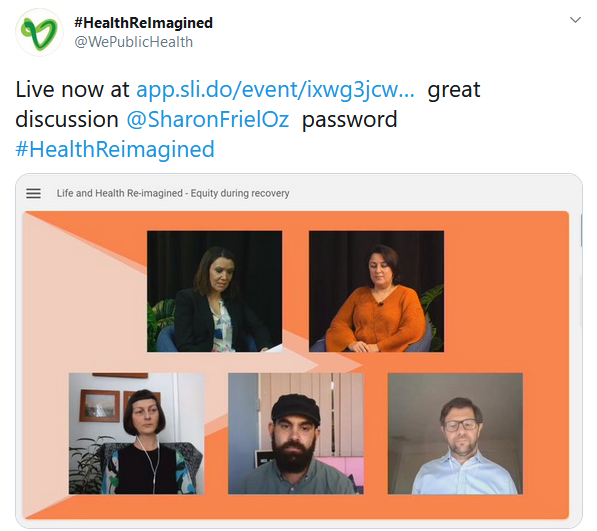 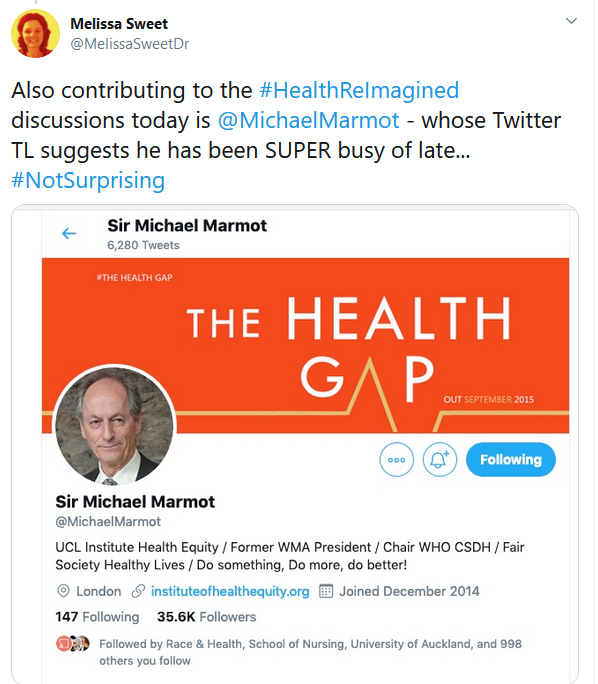 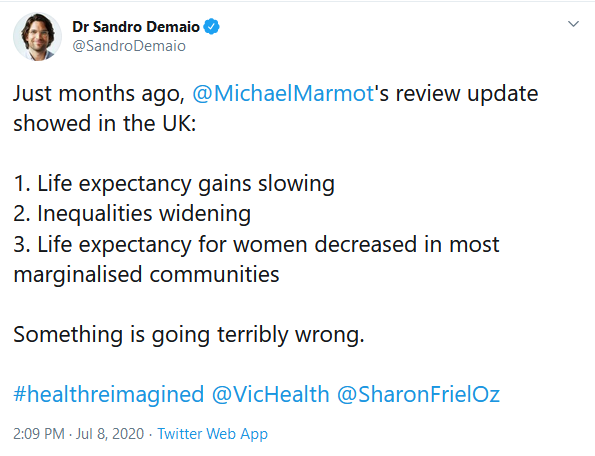 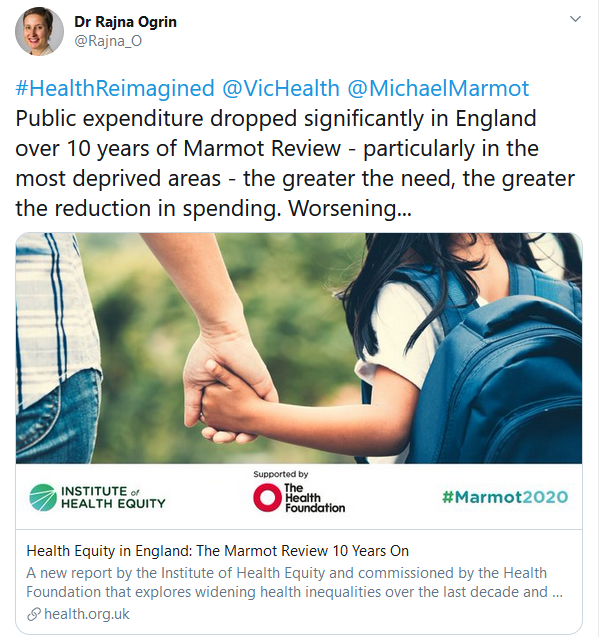 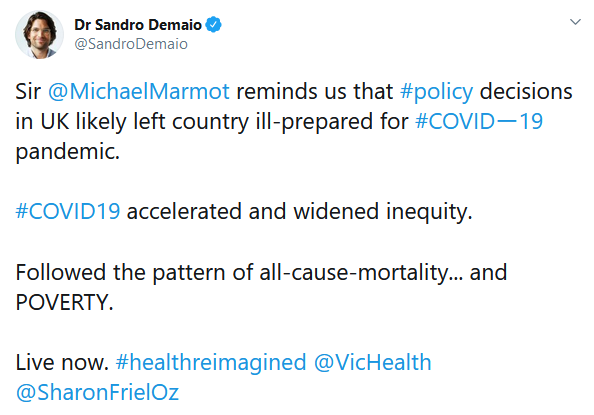 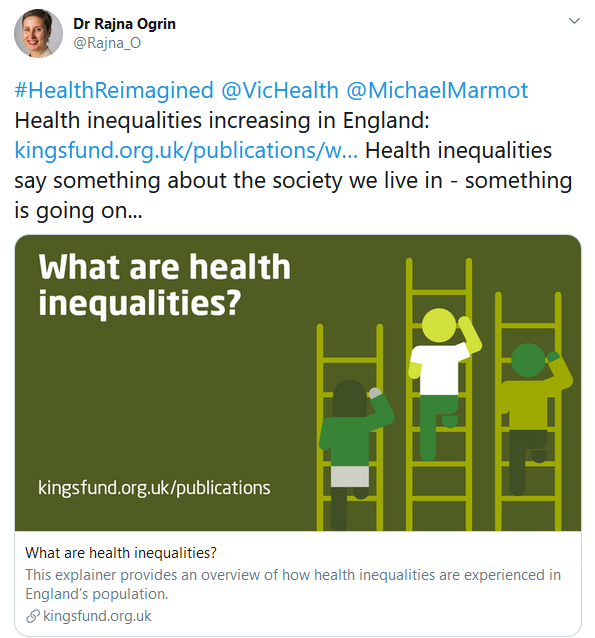 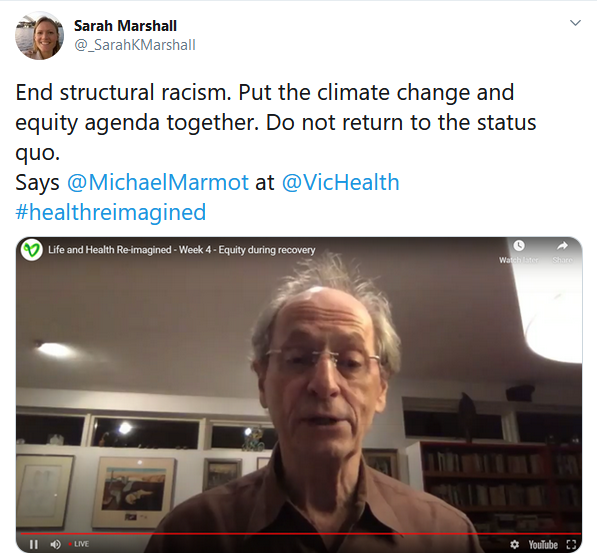 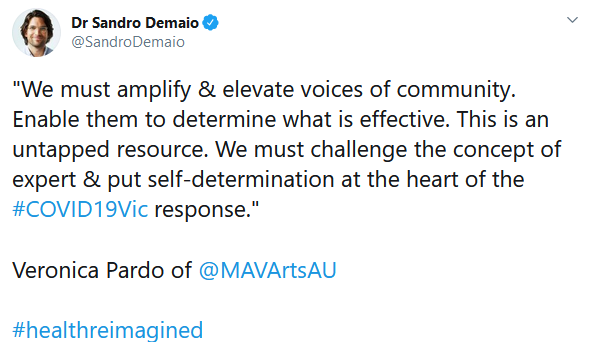 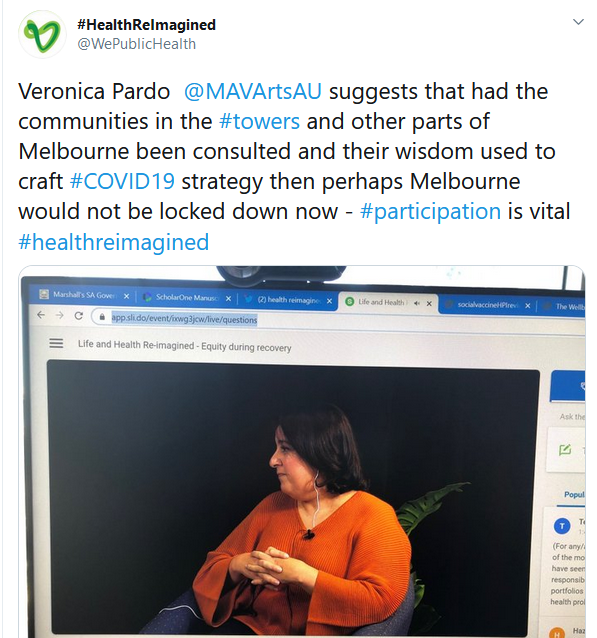 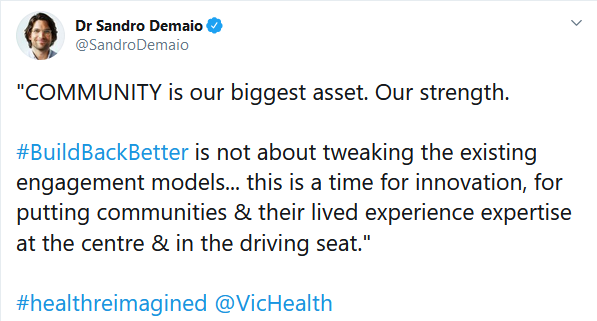 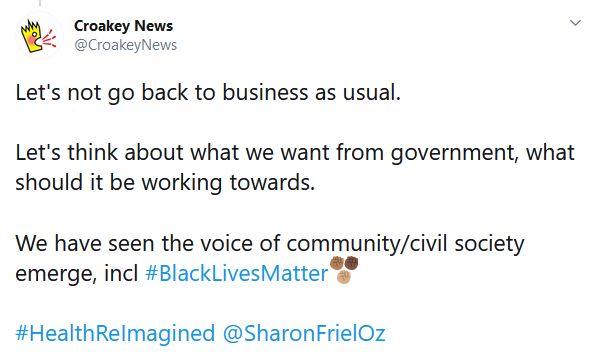 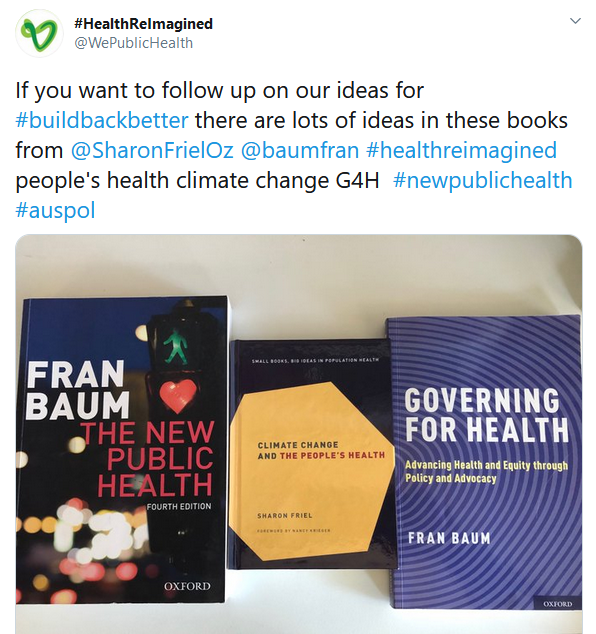 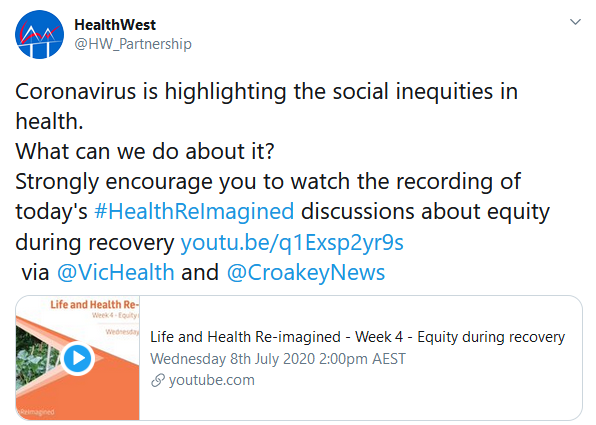