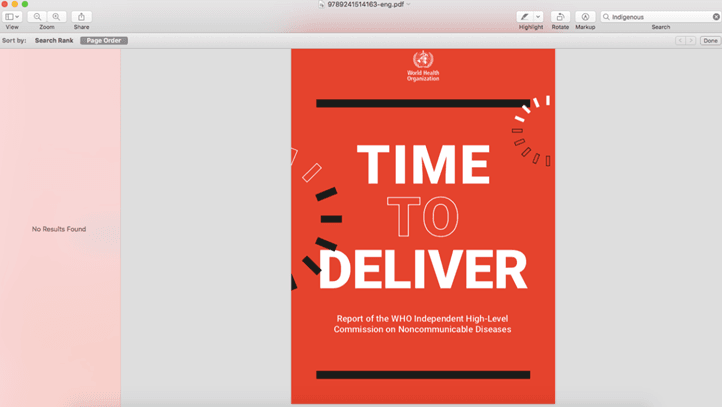 Despite the concerted campaign run by the global #IndigenousNCDs movement in recent months, the UN Political Declaration on the prevention and control of non-communicable diseases (NCDs) was adopted in New York late last month without any specific inclusion of Indigenous people.

In the leadup to the September 27 meeting at the UN, Croakey ran a series of articles examining the implications of this omission for Indigenous peoples.

In this followup post, #IndigenousNCDs co-founder, and Croakey contributing editor, Summer May Finlay reports on how Indigenous peoples have been missing in both language and representation on the Declaration and many other related documents and processes.

She calls on member states, including Australia, to step up and specifically report NCDs for Indigenous peoples despite the lack of inclusion in the Declaration and its monitoring tools, and to fund Indigenous people to work with their communities to ensure good health and wellbeing.

The NCD Alliance, a civil society network that unites 2,000 organisations in more than 170 countries, also called on world leaders to “go above and beyond the vague and unambitious commitments” contained in the Declaration, saying governments “cannot afford to continue sleepwalking into a sick future”.

What gets measured gets managed

The Political Declaration of the third UN High Level Meeting on Noncommunicable Diseases  (UN HLM on NCDs) was adopted  by member states in New York on Thursday 27 September.

The Declaration aims to assist in the progress of the Sustainable Development Goal 3.4, to:

By 2030, reduce by one third premature mortality from non-communicable diseases through prevention and treatment and promote mental health and well-being.

Since the 2011 Declaration and in the lead up to the 2018 Declaration, the World Health Organisation and member states have shown a lack of leadership by essentially remaining silent on Indigenous NCDs.

Not only are Indigenous people not included in the language of the  2018  Declaration and its related documents, Indigenous representatives do not appear to have been involved in its drafting and few have attended  the High Level Meetings.

The lack of inclusion of Indigenous people in UN NCDs documents means there is no accountability or oversight for member states to reduce the impact of NCDs on their Indigenous populations.

The lack of inclusion of Indigenous peoples in the draft declaration was the impetus to establishing the #IndigenousNCDs movement,  in the lead up to the Civil Society Hearing on NCDs held in New York in July 2018 as part of the UN progress towards the 2018 Declaration.

The movement is led by Indigenous people and supported by non-Indigenous  allies from a variety of countries including New Zealand, United States, United Kingdom, Canada and Australia.

#IndigenousNCDs is supported by the Australian based not for profit organisation CLAN (Caring & Living As Neighbours). CLAN’s focus is equity for children living with chronic health conditions in resource-poor settings.

The lack of inclusion of Indigenous people in the NCDs dialogue today is why Indigenous leadership needs to be engaged in the ongoing NCDs conversations.

The 2017 WHO NCDs Progress Monitor demonstrates no attempt to collect or communicate data on Indigenous people by the WHO and the member states. There is also no Indigenous data provided in any of the NCD country profiles. 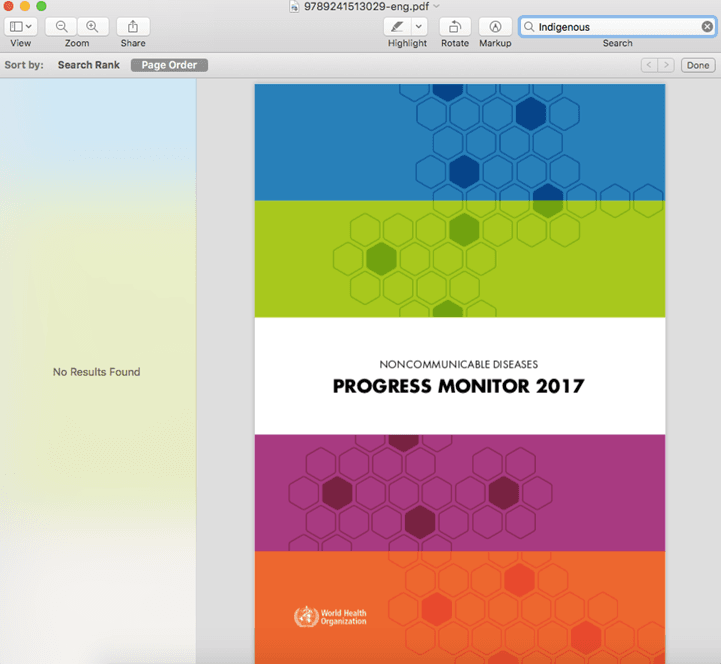 There are also no Indigenous specific indicators in the 2017 WHO Technical Note which reported the 10 indicators the WHO Director General would use to measure the time bounded commitments from the 2011 Declaration  and the 2014 Outcome document of the high-level meeting of the General Assembly on the comprehensive review and assessment of the progress achieved in the prevention and control of non-communicable diseases.

The Report of the WHO Independent High-Level Commission on Noncommunicable Diseases, Time to Deliver, which was released in the lead up to the 2018 Declaration, also makes no mention of Indigenous peoples, not even in a footnote.

Failure to include Indigenous peoples in the global NCDs discourse is problematic – particularly because we know that ‘what gets measured gets managed’.

Given the higher burden of disease and lower life expectance of Indigenous people, if the Sustainable Development Goal 3.4 is to be achieved equally across all populations, there needs to be specific focus on Indigenous peoples.

Indigenous peoples have unique and distinct cultures.  Their histories are coloured by colonisation and this  is playing a role in the prevalence of NCDs.

The solutions therefore, need to be nuanced, culturally relevant and take into consideration the social and historical context of Indigenous communities.

Indigenous peoples  understand their own cultures and histories better than anyone else, therefore they  should be the driver of solutions.

Without specific mention of Indigenous peoples in the Declaration, the fear is that there will continue to be a mainstreaming approach to NCDs prevention and control.

Mainstream solutions are unlikely to make the significant impact required and member states need to engage with their Indigenous populations when seeking to address NCDs.

And Indigenous people will continue to suffer higher burdens of disease and lower life expectancies until current approaches change.

We therefore call on UN member states to specifically report NCDs for Indigenous peoples despite the lack of inclusion in the Declaration and its monitoring tools.

We also call on members states to fund Indigenous people to work with their communities to ensure good health and wellbeing.

Until this happens, Indigenous communities will continue to suffer.