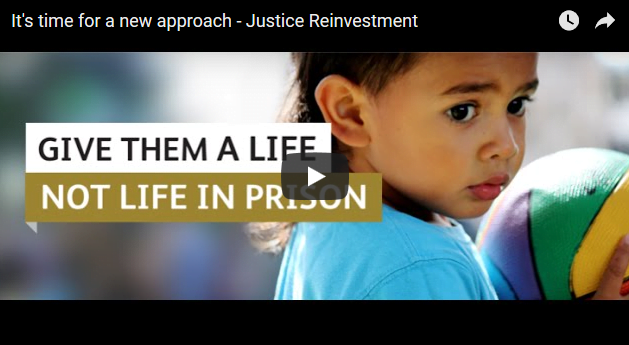 Still from a Change the Record video

Introduction by Croakey: The Aboriginal and Torres Strait Islander-led Change the Record Coalition last week released its submission to the Council of Australian Governments’ (COAG) ‘refresh’ of Closing the Gap, urging it to adopt targets to reduce violence and imprisonment rates experienced by Indigenous people, including specific targets on family violence and youth justice.

In a statement, the Coalition highlighted Australian Institute of Criminology data released earlier this month showing  that the number of deaths of Aboriginal and Torres Strait Islander people in custody in 2014-15 was the highest it had been since 1979-80.

“Not only are imprisonment and violence rates at epidemic levels, they’re continuing to get worse for Aboriginal and Torres Strait Islander communities,” said Damian Griffis, Co-Chair of Change the Record and CEO of the First Peoples Disability Network.

Fellow Co-Chair Antoinette Braybrook, Convenor of the National Family Violence Prevention Legal Services Forum, said the Closing the Gap ‘refresh’ is “the most significant opportunity” since the  Royal Commission into Aboriginal Deaths in Custody for Australian governments to take real action to make sure Aboriginal and Torres Strait Islander communities can thrive.

Reinforcing the importance of Indigenous-led solutions to over-incarceration, Change the Record recommended that the framework for Closing the Gap targets, and arrangements to oversee, monitor and evaluate Closing the Gap Strategy, are negotiated with Aboriginal and Torres Strait Islander Community Controlled Organisations.

It has also urged that Closing the Gap sub-targets and indicators address the systemic factors that drive high rates of imprisonment and violence, including laws, policies and practices in the justice system that are applied unequally to Aboriginal and Torres Strait Islander people.

An upcoming conference in regional New South Wales is also focused on addressing incarceration rates for Aboriginal and Torres Strait Islander people. It has a particular focus on raising the age of criminal responsibility to protect children and recognising the impact of cognitive disability, as well as racial bias and entrenched discrimination, for many in youth detention or prison.

The Australian National Conference on Indigenous Incarceration, to be held at Salt Beach on 28-29 June, has as its theme: Ending overrepresentation of Indigenous people in Australia’s prison system.

In the post below, conference coordinator Dr Meg Perkins talks about her own journey of discovery about what lies behind incarceration rates and experiences.

I started my career in forensic psychology in a Brisbane prison in 1991, the same year that the Royal Commission into Aboriginal Deaths in Custody found that First Nations people were overrepresented in every aspect of the system, from arrests to custodial sentences. Now, 27 years later, we have Pathways to Justice, a report by the Australian Law Reform Commission on its inquiry into this overrepresentation.

The first thing I noticed in the prison was that almost all of the inmates, Aboriginal or non-Aboriginal, seemed to be suffering from psychiatric disorders or cognitive disabilities. Almost none of them could read a book. Many of them had speech impediments. In addition to this, many had grown up in Boys Homes, incarcerated at the age of eight as “uncontrollable”.

There were some people who had been diagnosed with “manic depression” or schizophrenia, but the vast majority had symptoms of post traumatic stress disorder (PTSD).

There was one young man whose mother had been murdered, one who had found his sister hanging from a tree, more than one who had been gang-raped in the Boys Homes, many who had been terrified by domestic and family violence. Their lack of ability to concentrate at school, or to sleep without alcohol or other drugs, told the tale, as well as their outbursts of rage. Almost all of them had left school in Year 8 or 9.

The more I learned about Indigenous incarceration, the more I wanted to know, including the role of racism in the massive and ever-increasing overrepresentation of First Nations people in the prison system.

In 2007 we began the Free Minds Forums in Brisbane where Kerrianne Cox, the Aboriginal singer-songwriter from Western Australia, told us about the missions where traditional music and dance was forbidden, Dr Rosalind Kidd talked about racial discrimination and stolen wages, and, in 2010, we heard from Kimina Andersen and Dr Ed Heffernan about their study of the mental health of Aboriginal and Torres Strait Islander people in custody.

Eventually I came across a study of protective factors, and cultural resilience was mentioned as protective for Indigenous people. In order to find out what cultural resilience was, and whether it had an effect on incarceration rates, I studied the criminal justice system in the Cook Islands, spending many weeks on the island of Rarotonga, interviewing young people, child welfare officers, police and prison officers.

When I wrote up the thesis for my PhD it seemed clear that Aboriginal and Torres Strait Islander cultures are very similar to South Pacific cultures and produce similar resilience.

In 2016 we held a conference on the Tweed Coast of northern New South Wales, “Closing the prison gap: building cultural resilience”. Most of the speakers were Indigenous people and they told us that their culture was strong and that they were resilient. The problem, they said, is the system.

What really shocked me was the fact every child at one Special Purpose School (Behaviour)  and a particular Youth Detention Centre was Aboriginal. Statistics tell us that nearly nine out of 10 young children in custody (under 12) are Aboriginal or Torres Strait Islanders. We also know that the same proportion of young people in detention in Western Australia have at least one severe brain-based deficit, and about one third have fetal alcohol spectrum disorder (FASD).

I agree with the work of many other Indigenous and non-Indigenous organisations that we must focus on children if we are to do anything about this terrible situation.

As others also point out, there is one recommendation that could change a great deal at the stroke of a pen.

Raise the age of criminal responsibility from 10 years to 15 years and society would be forced to provide therapeutic services to the many children suffering from brain dysfunction due to prenatal exposure to alcohol and other drugs, and/or the effects of traumatic experience.

As it is, young children with cognitive disabilities are being charged with offences such as “assault police” and “malicious damage” to property and, due to lack of diagnosis, treatment and support, become repeat offenders.

People with brain-based disabilities may find the structure of prison life comfortable and the presence of relatives and friends reassuring. Sadly, sexual abuse continues behind bars, and institutionalisation means that prisoners fall further and further behind their peers in education, health and employment outcomes.

The National Conference on Indigenous Incarceration in June 2018 will focus on systemic issues, disabilities, and family and cultural strength. Speakers will include Professor Chris Cunneen from the Jumbunna Institute for Indigenous Education and Research on raising the age of criminal responsibility, Dr Stephen Hagan on judicial bias, and Sharon Payne, Director of the Ngunnawal Centre, at the University of Canberra, who will present her research “Aboriginal until Proven Innocent”. Former Uluru Working Group Co-chair Thomas Mayor will deliver a presentation on the Uluru Statement from the Heart: “One Voice: Statement from the Heart”.

Dr Meg Perkins is Principal at Tweed Psychology and Adjunct Research Fellow at Griffith Criminology Institute. She is Coordinator of the Australian National Conference on Indigenous Incarceration.

See full details on the program and speakers.

PrevPreviousPutting Aboriginal and Torres Strait Islander community priorities into policy: What will it take?
NextZap! Kapow! Meet the superheroes of #Nurseforce (and also some villains)Next