Home Croakey projects @WePublicHealth2021 Calls on courts, coroners and media to stop adding to injustice and agony of deaths in custody 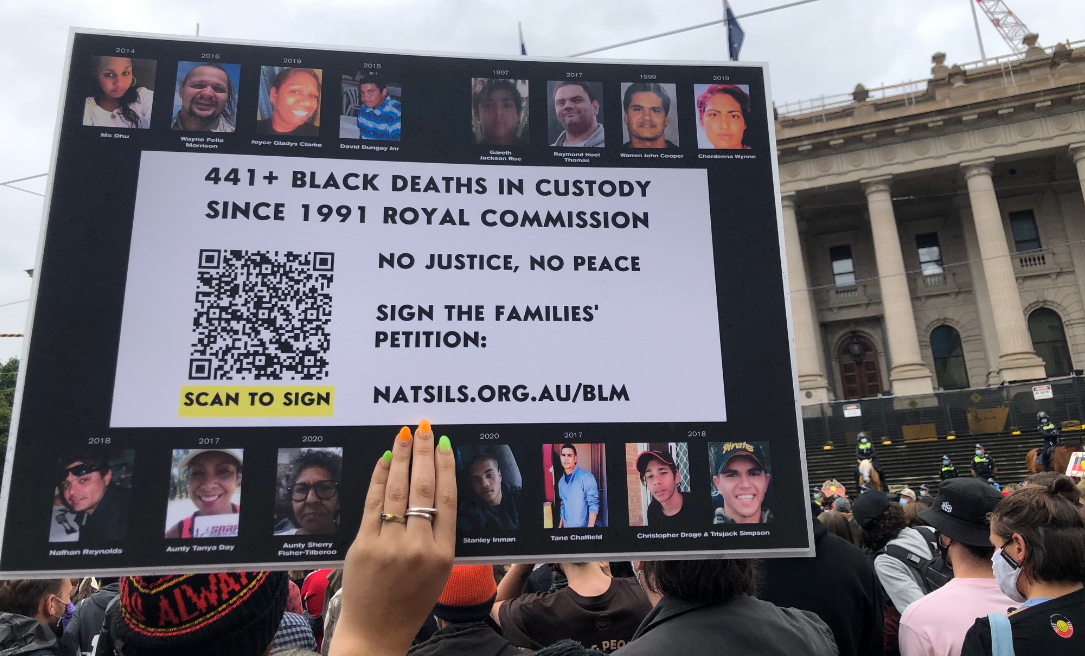 Calls on courts, coroners and media to stop adding to injustice and agony of deaths in custody

Introduction by Croakey: Today’s guilty verdict in the trial of United States police officer Derek Chauvin for the killing of George Floyd, that sparked #BlackLivesMatter protests across the globe, is being seen as a defining moment that goes beyond policing and beyond the US.

“We have seen some kind of justice in the USA – when will we see justice in Australia?” said Leetona Dungay in a statement issued by the National Justice Project. She is the mother of David Dungay Jr, who also cried out that he could not breathe when he was dying, held face down by prison officers, in Sydney’s Long Bay Jail in 2015.

Wiradjuri justice health researcher Associate Professor Megan Williams, from the University of Sydney and Mibbinbah, said today’s conviction of Floyd’s murderer reinforces many calls made in discussions last week acknowledging the 30th anniversary of the Royal Commission into Aboriginal Deaths in Custody.

Last week’s discussions also shone a spotlight on the failure of coronial inquiries to deliver truth and justice for Aboriginal and Torres Strait Islander people and to instead bring more distress for grieving families.

“I felt like we was the criminals, and we was attending court, and we was in a criminal trial,” said David Dungay Jr’s nephew Paul Silva, in this Guardian Australia article about the toll on families.

Guest tweeting throughout the week at @WePublicHealth, Williams urged coroners to take more care when delivering findings about deaths of Aboriginal people in custody.

Her family had a member die in custody and she works closely with another, who said:

The process for us is brutal. You are handling the truth and you need to bring the truth out. Don’t hide it.”

Williams contributed to a report written at the request of the National Aboriginal and Torres Strait Islander Legal Services that was released last week, which critiques oft-repeated claims in a Deloitte review on the extent to which the RCIADIC recommendations had been implemented and cites new evidence of the failure of governments to act on the Royal Commission’s findings.

“We argue that there is a risk that misinformation may influence policy and practice responses to First Nations deaths in custody, and opportunities to address the widespread problems in Indigenous public policy in Australia may be missed,” the authors said their paper.

Williams and others also tweeted about the New South Wales Parliament’s First Nations Deaths in Custody report, handed down last week, which called for an end to “police investigating police”, among nearly 40 other recommendations.

In other related news, Melbourne University Senior Research Fellows Amanda Porter and Eddie Cubillo called on media outlets to take note of Royal Commission recommendations about their work, warning that misinformed and insensitive reporting can cause additional pain for families and communities and fuel racism.

“Rather than allowing victim and criminal narratives to dominate media representation of Aboriginal people, mainstream media outlets need to centre the work of families and communities who are doing the work to end Black deaths in custody,” they wrote at The Conversation.

Also last week, the Joint Council on Closing the Gap last week agreed to accelerate the  formation of a Justice Policy Partnership to address over-incarceration of Aboriginal and Torres Strait Islander people.

In its latest communique, the Joint Council acknowledged the anniversary and “noted that joined up work between all governments in partnership with Aboriginal and Torres Strait Islander representatives is critical to reducing the rate at which Indigenous people are incarcerated, and thereby reduce deaths in custody”.

Read Williams’ coverage at @WePublicHealth of the Royal Commission anniversary here and below. You can follow her at @MegBastard.

From a family member #RCIADIC30Years Coroners: take more care when delivering findings about deaths of Aboriginal people in custody. The process for us is brutal. You are handling the truth and you need to bring the truth out. Don’t hide it.

The coronial inquest is like a court case, but families like ours had no representation and no way to speak at it, no support, no support to work through the huge amount of paperwork. People say there is legal support but not for our circumstances there wasn’t.

The death in prison broke our law too, Aboriginal law, but there was no way that could be addressed, it was all about their law.

There have to be protocols about the bodies of the people who have passed on. There was no respect. That didn’t follow our protocol and there didn’t seem to be a protocol we could see that had any detail from an Aboriginal perspective that really meant something.

Prison staff, all types of them, need training so that they can show more respect. Basic respect. And not be negligent. They seem to have no idea, in the way they spoke to us, the things they did, about care from an Aboriginal cultural perspective.

The ones writing the policies in the prison health services – do they have experience in writing policies or are they trained as health care workers – nurses? The policies seem poor or don’t seem to exist not at least for family to get hold of.

I’d hate to see more Aboriginal and Torres Strait Islander people work in prisons #abolishprisons #freeher There has to be equity not the current exclusion, lack of influence we have. 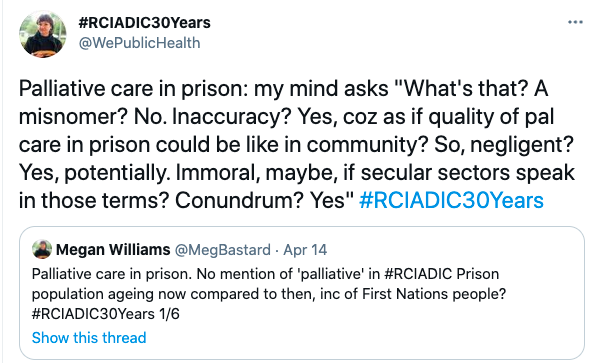 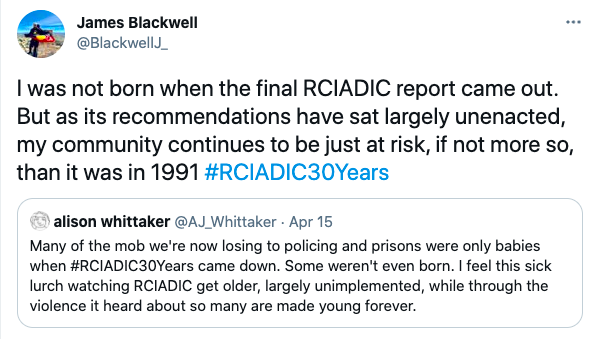 I was in grade-12 a massive sports high school and about 20 of us did modern history and debating. We had a teacher who talked with us about the RCIADIC. I never thought then my own family member would die in prison decades later, or things be so much worse now. 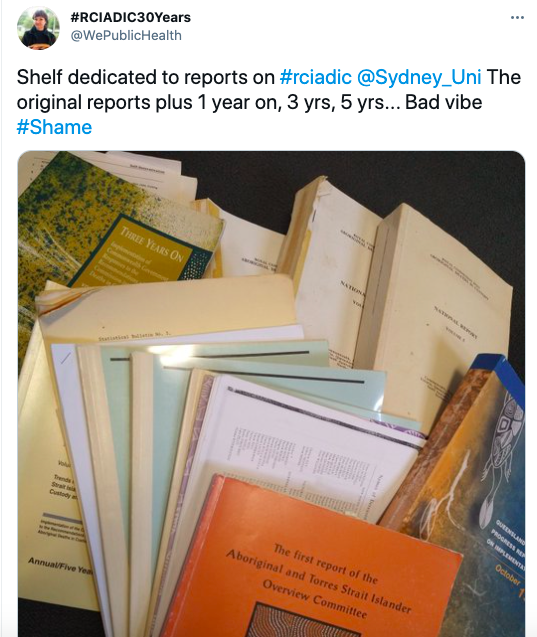 Much more evidence needed and from perspectives of Aboriginal and Torres Strait Islander professionals, scholars and community. It’s a no brainer for critical thinking.

Documents and transcripts of NSW Parliamentary Select Committee into the High Level of First Nations People in Custody and Oversight and Review of Deaths in Custody.

On healthcare in prison: “Accessing it at super max, they won’t let you to the clinic. In max they’re banged up 19 hours a day. In here, if you need something go and knock on the door” p. 19

OPCAT: Optional Protocol to the Convention against Torture and Other Cruel, Inhuman or Degrading Treatment or Punishment. Will Australia be compliant by January 2022?

Justice Reinvestment: I’ve always thought “just meet #RCIADIC recommendations” and “where was the original investment to meet need?” but Justice Reinvestment is not so simple. It is a predominantly US and European multi-stage economic model. When I worked with Project 10% in Brisbane, we held a forum…

The other question asked was “Did Aboriginal people come up with doing Justice Reinvestment or did some whitefella suggest it as an option, then make it start to happen? And then we all have these meetings to go to, to try to keep up or stand our ground. That’s not self-determination…”

Another question was “The data used for Justice Reinvestment – did Aboriginal people say how to design that research to get that data?” No. So it’s often flawed and incomplete data that decisions are supposed to be made on…

Corporation KPMG did impact assessment of Maranguka Justice Reinvestment which was piloted from 2013 in Bourke naming several ‘improvements’.

The detail is a must see. If nothing else, for the logic map/illogic map. There are no mentions of #racism according to the CTRL F search nor #exclusion #workforce There is one mention of #culture none of #culturalsafety 6 times #healing 6 times #Country.

I seem to be on a different wavelength. It’s a righting of power #UNDRIP I’d seek to follow. The mention of #rights in the document is only in the footer for “KPMG… all rights reserved”.

On now: 30 Years! Still No Justice. Beautiful hearing these voices. Most important and helpful thing. Thank you to the organisers, and host @drcwatego who started out focusing on love and being loving. 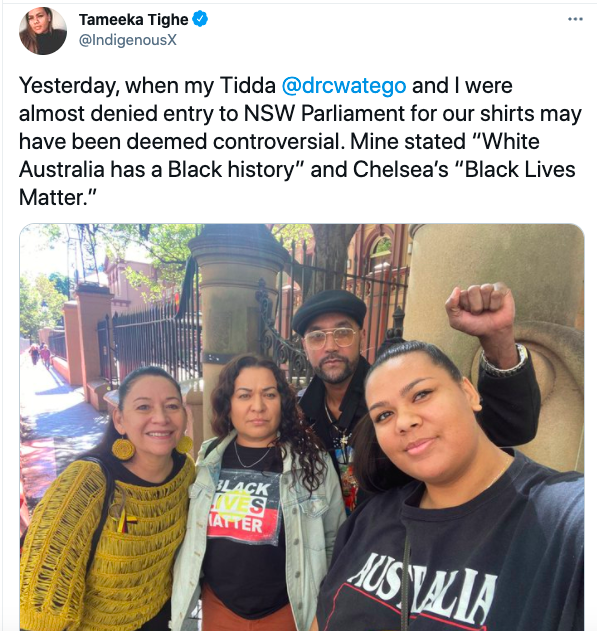 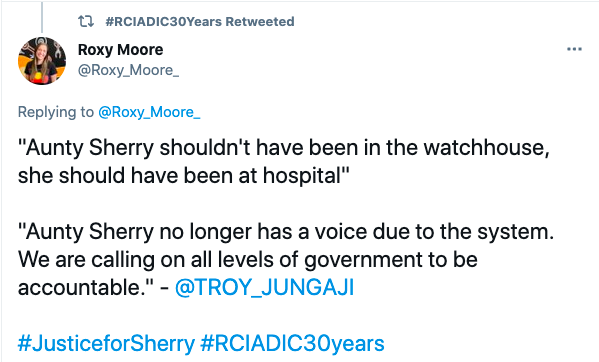 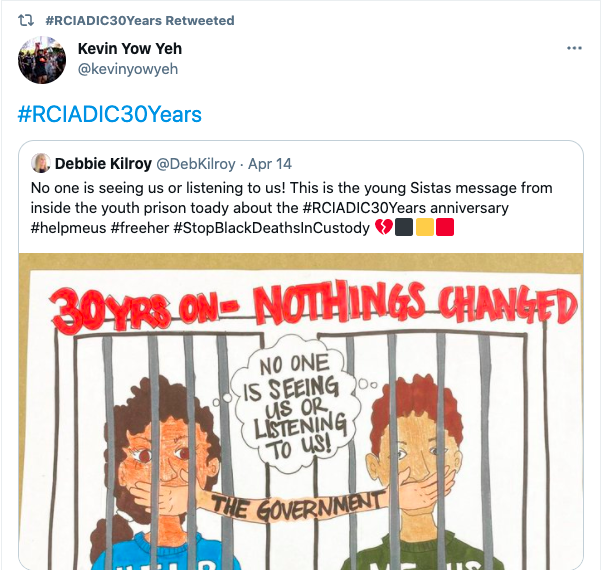 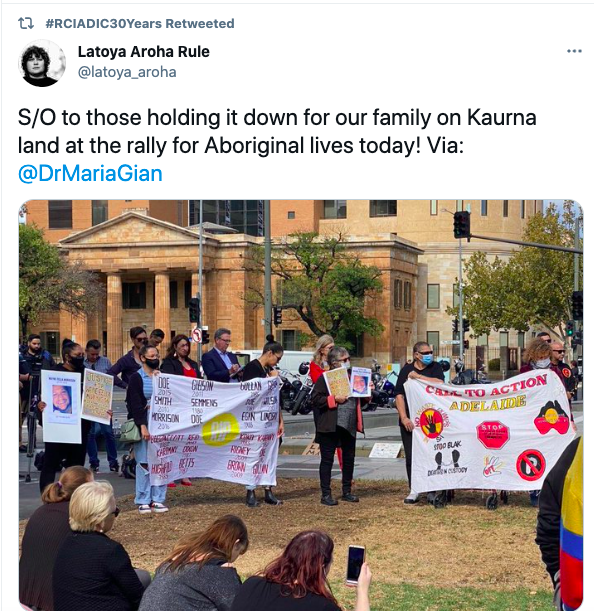 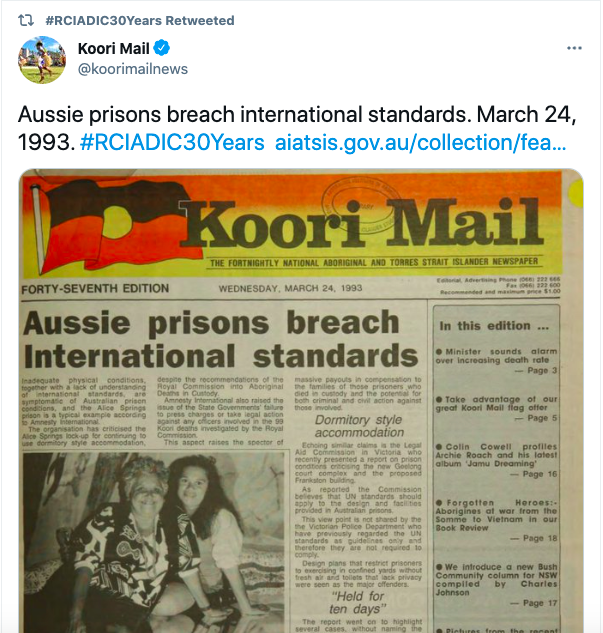 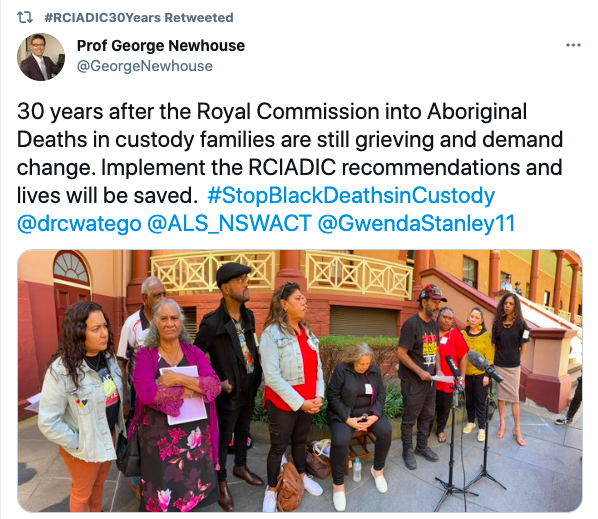 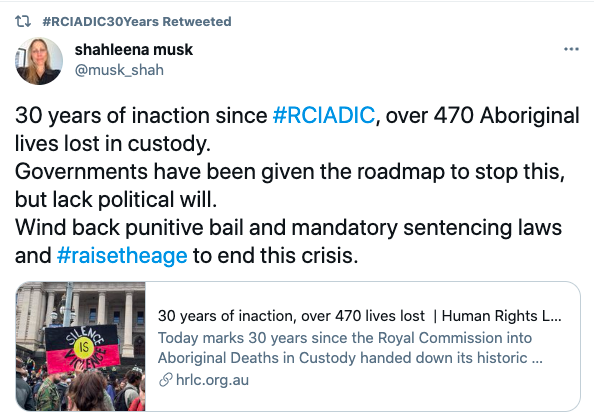 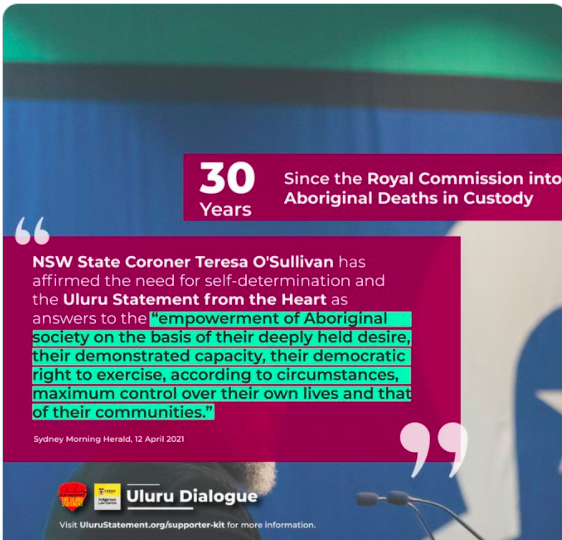 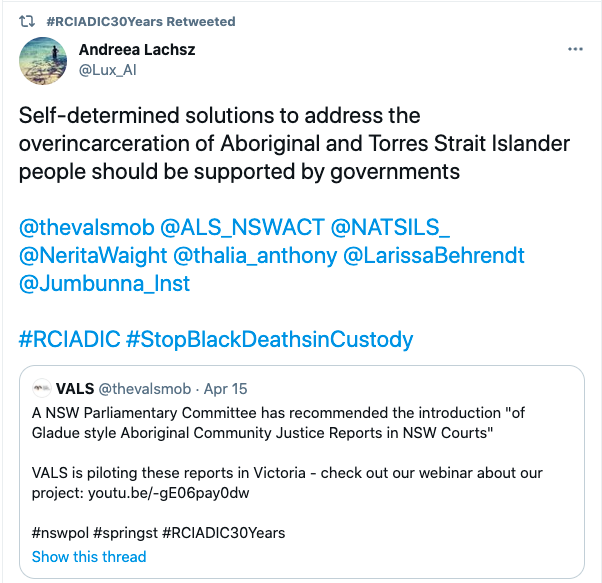 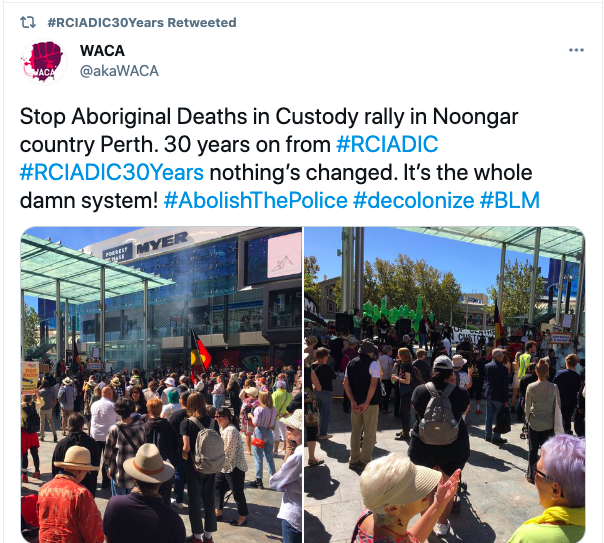