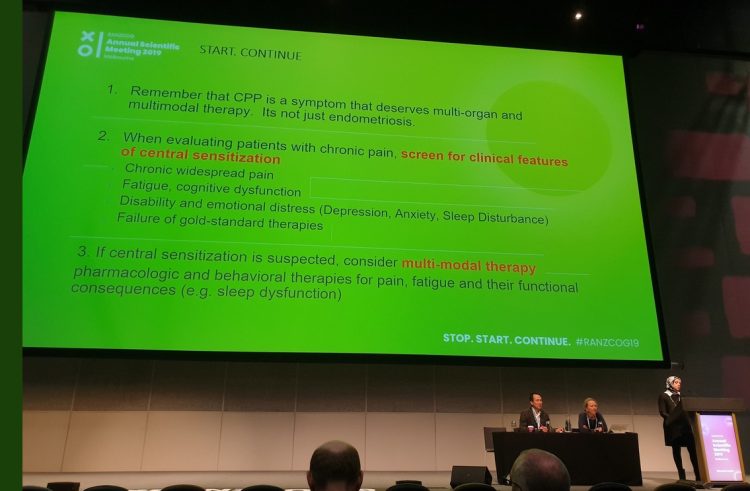 The complexities of chronic pelvic pain were discussed in-depth at the recent Royal Australian and New Zealand College of Obstetricians and Gynaecologists (RANZCOG) annual scientific meeting in Melbourne.

Chronic pelvic pain, described as “one of the most enigmatic conditions in gynaecology”, encompasses so much than endometriosis and is a multifactorial, complex condition, according to speakers at a recent medical conference.

Affecting one in nine Australian women aged 40-44 according to a recent report by the Australian Institute for Health and Welfare, chronic pelvic pain involves links to other pain syndromes, neurological changes, and has a strong psychological dimension requiring multidisciplinary treatment.

Chronic pelvic pain was front and centre at the Royal Australian and New Zealand College of Obstetricians and Gynaecologists (RANZCOG) annual scientific meeting in Melbourne this month, with a plenary session featuring speakers from a host of disciplines, including physiotherapy and psychology, as well as a focus on priorities in endometriosis.

The Federal Government nominated the condition as a research priority last year, unveiling the first-ever National Action Plan for Endometriosis and pledging $15 million to advance this agenda.

Dr Sawsan As-Sanie, past president of the International Pelvic Pain Society, was keynote speaker for the plenary session. She delivered a masterclass in the drivers, diagnosis and management of chronic pelvic pain, which she described as “one of the most enigmatic conditions in gynaecology”.

She said the condition was rarely commensurate with what lesions (if any) could be seen.

Instead, As-Sanie said the evidence pointed to chronic pelvic pain being all about the brain, with changes seen in structure, volume and function, and the condition often featuring a constellation of other symptoms, including poor non-restorative sleep, memory problems, mood disorders and an exaggerated response to both internal (bodily functions) and external (sound, light) stimuli.

Characterising it as a “widespread disorder of sensory dysregulation” at the level of the central nervous system, As-Sanie said chronic pelvic pain was just one of a number of chronic pain syndromes that, along with chronic fatigue syndrome and fibromyalgia, also affected the bowel, bladder and vulva, and shared features such as multifocal widespread pain, exacerbation during times of stress and a poor response to opioids.

Chronic pain syndromes are up to two times more common in women and had strong genetic and familial underpinnings, she said.

Patients with chronic pelvic pain often reported a higher lifetime history of pain (for example, headaches and period pain), and As-Sanie said gender bias and a tendency to dismiss or downplay pain reports – particularly from adolescents and young girls – was very much still an issue in the health system.

Given this, As-Sanie said it was so important to take a thorough history before resorting to surgical interventions that would ultimately be futile.

Instead, she urged colleagues to understand chronic pain as a vicious cycle in which fatigue and the functional consequences must be addressed.

She presented evidence showing that, for these patients, non-pharmaceutical therapies including education, aerobic exercise and cognitive behaviour therapy (CBT) were superior to drugs, and shared some comprehensive resources for doctors and patients.

As-Sanie had seven key messages for her colleagues:

Watch our interview with As-Sanie

Physiotherapist Jen Langford stressed the importance of a biopsychosocial approach, talking through the physical and psychological domains. ‘Quiet the pelvis and calm the nervous system’ was her mantra, she said.

The single most valuable question clinicians could ask their patients was “what do you believe is going on?”, Langford said, characterising her role as one of partnership, validation, empowerment and promotion of the self-efficacy of her patients.

She also reflected on the importance of language and beliefs, and of educating patients about their pain, which she described as an ethical imperative.

This was a theme picked up strongly by Associate Professor Christina Bryant, a psychologist who offered some startling statistics and insights into living with chronic pelvic pain.

About half (48.6%) of the women in one study had experienced physical or sexual abuse, and one-third screened positive for post-traumatic stress disorder, Bryant said, with the odds also greatly increased of substance use (4.6x) and mood disorders (2.3-2.7x), with another study showing 86% had depression (compared with 38% of controls).

Professor Sonia Grover, a specialist in paediatric gynaecology, painted a similar picture on chronic pelvic pain in her presentation on caring for vulnerable populations (see tweets in this thread).

Understanding and managing chronic pelvic pain was crucial given how common it was, affecting the same proportion of the population as back pain, she said.

Among adolescents, it had been found to have more significant impacts on quality of life than juvenile arthritis or cystic fibrosis, Grover said.

She offered some advice for clinicians (below) and reminded them not to forget their trans patients (read our story on trans health from #RANZCOG19). 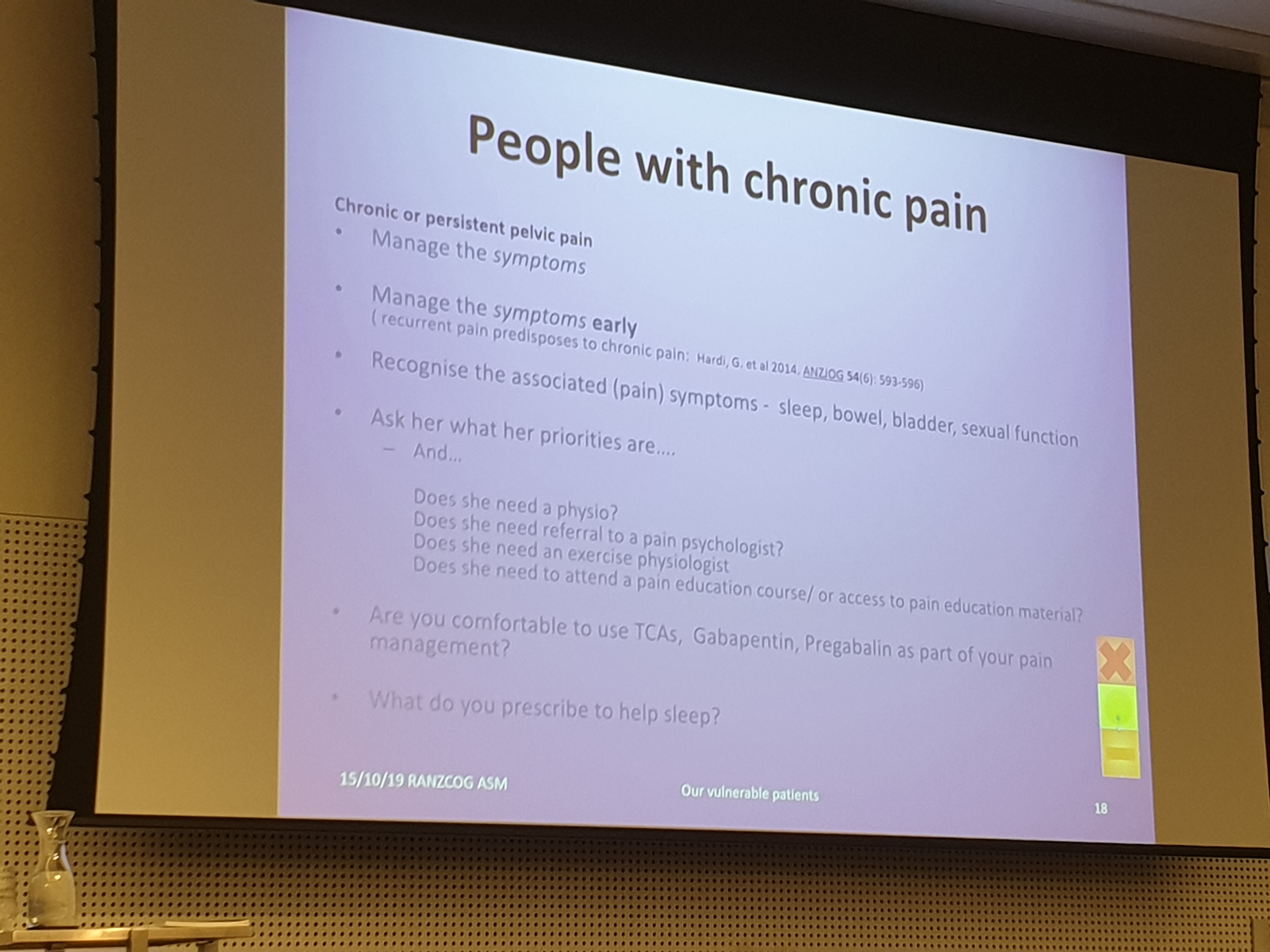 Bryant said chronic pelvic pain patients tended to feel misunderstood by their treating doctors, isolated and alone, and became fixated on the idea that the next test or investigation would be “the one” to solve their problems.

Though there was usually a strong psychological element to their experience of the pain, they often resisted attempts to address these, Bryant said.

While there wasn’t much evidence for the efficacy of any one approach, including CBT, Bryant said there was some support in the research for multidisciplinary management, while mindfulness was emerging as a promising strategy.

For treating teams, a thorough pain history with an emphasis on functional impairment, beliefs, goals and coping strategies was essential, Bryant said, along with inquiring about a patient’s psychological and trauma history. She also stressed the role of patient education.

In a panel session to conclude the plenary, As-Sanie cautioned against an undue emphasis on trauma, describing it as just one piece of the puzzle and counselling colleagues to begin with symptoms.

Bryant echoed this warning, saying trauma was incredibly skilled and complex work and “you don’t want to entrust your trauma to just anyone”.

Professor Peter Rogers, who has worked in endometriosis research for almost 30 years, said O&G had – as a specialty – “dropped the ball” on endometriosis for too long, and it had only been through the dovetailing of patient activism and political will that progress was now being made.

He said data collection (“we can’t talk sensibly about the scope of the problem”), detection (the “holy grail” of which would be a non-invasive test or marker), and management (“to put it bluntly, we don’t know what we are doing”) were priority areas for research. 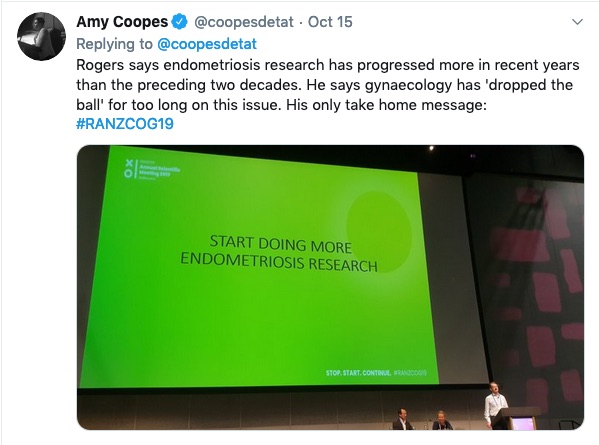 Read the full Twitter thread from the pelvic pain session.

• Stay tuned for our next report from #RANZCOG19 on the transvaginal mesh scandal.

Part two of wrapping reaction to the Federal Budget, with some ‘thumbs down’

Self-collection: will it be a game changer for cervical cancer prevention?