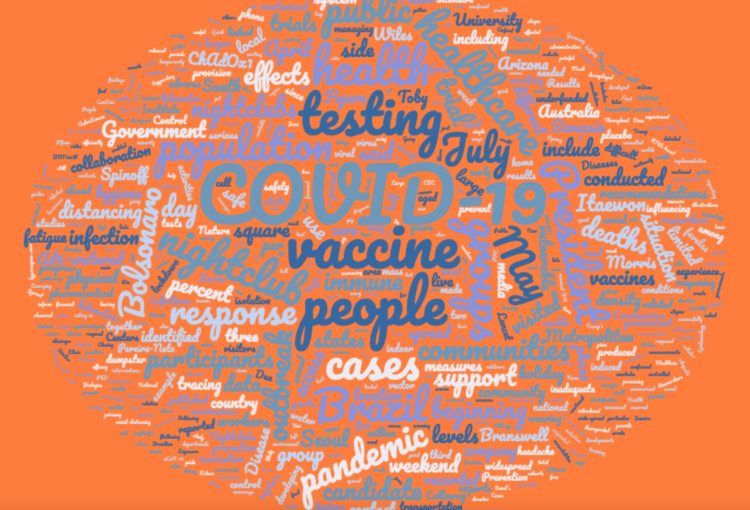 COVID-19 wrap: latest on vaccines, updates from Brazil and South Korea, and putting out fires in the United States

In the latest edition of the COVID-19 wrap, public health researcher Alison Barrett provides an update on vaccine developments, and reports on local responses in Brazil, the perils of clubbing in South Korea, and some suggestions for fixing the “dumpster fire” in the United States.

The wrap also links to a collection of engaging information resources from Aotearoa/New Zealand, which are available for wider use under a creative commons licence.

Thanks also to Elisio Pereira-Neto, PhD candidate at University of South Australia, for contributing.

Last week, Dr Lesley Russell provided a detailed update on COVID-19 vaccine developments in The Health Wrap. In particular, she summarised results of Phase 1 and 2 of the trial for a candidate vaccine developed by US biotech company, Moderna Inc; reporting that the vaccine was safe and produced an immune response in participants.

In the week since, results from the early phase of three other candidate vaccine trials were published.

A team of researchers from University of Oxford, United Kingdom are developing a viral vector vaccine, ChAdOx1 nCoV-19, in collaboration with pharmaceutical company AstraZeneca. The researchers conducted a randomised controlled trial (RCT) with 1,077 participants aged 18 – 55 years to measure the safety, and cellular and immune response to the vaccine over a 28-day period from vaccination.

Key findings indicate this vaccine induced an immune response and no serious adverse events occurred. People in the ChAdOx1 group were more likely to experience side effects (fatigue, headache, muscle aches and fever) than those in the control group; these side effects were most severe on the second day after vaccination and were reduced with use of paracetamol.

Researchers from the Beijing Institute of Microbiology and Epidemiology, in collaboration with CanSino Biologics, are developing another viral vector vaccine, Ad5-vectored COVID-19 vaccine. In the second phase of their trial, 508 participants aged between 18 and 83 years were randomised into three different groups; two received different doses of the Ad5-vectored vaccine and the third group received a placebo.

Similar to the ChAdOx1 vaccine, those in the vaccine groups experienced more side effects (fatigue, fever and headache) than those in the placebo group. The study found that Ad5-vectored vaccine induced an immune response in most participants.

Results from a third candidate vaccine trial by BioNTech and pharmaceutical company, Pfizer, in Germany were released on Preprint server, MedRxiv. The RNA-based vaccine, BNT162bl, produced an immune response in most participants; and as with the other candidate vaccines, while no serious adverse effects were observed, fatigue and headaches were reported.

Results from these studies are promising and the minimal side effects support progress to the next stages of trial; however, it is important to note that it is still early days. The trials have been conducted over short-time periods among small groups to determine if safe enough to continue with larger trials.

Future studies will be needed in larger cohorts and to assess the efficacy of the vaccines in different population groups, people with comorbidities and older and younger age groups.

Below are some useful guides to explain how vaccines are made:

How to make a vaccine video, Dr Siouxsie Wiles and Toby Morris in The Spinoff, 28 July 2020

(This piece was written in collaboration with PhD candidate at University of South Australia, Mr Elisio Pereira-Neto, @elisioapn.)

When journalists asked Brazilian President Bolsonaro about the rapidly growing cases of COVID-19 in the country at the beginning of May, he replied with: “So what? What do you want me to do?”

Since the beginning of the pandemic, the President has downplayed the seriousness of the virus and disregarded recommendations for the implementation of physical distancing measures:

“Mr Bolsonaro said some states had gone too far in their social-distancing measures, and that steps must be taken as soon as possible to bring the economy out of “intensive care”.

Two national health ministers have left their roles after disagreements with President Bolsonaro about the way he was managing the pandemic; they have yet to be replaced.

A large proportion of the population support and believe President Bolsonaro because he is the head of state.

“Despite being probably the main issue, we cannot blame just the President for the situation,” Elisio Pereira-Neto said, regarding COVID-19 in Brazil.

Some of the other factors influencing the situation include the population density in Brazil, socioeconomic influences, an underfunded public healthcare system, inadequate levels of testing and limited personal protective equipment for healthcare workers.

In comparison, Australia’s population is 25,520,783 and population density of three people per square kilometres. It is indicative of the crowded living conditions in some regions of Brazil.

Thirteen million Brazilians live in overcrowded favelas (slums) with limited access to clean water, sanitation and hygiene; and approximately half of the population live in, or are at great risk of, poverty (US$5.50 per day). These vulnerable groups have limited access to healthcare and live in conditions where it is difficult to maintain physical distancing.

While Brazil’s public healthcare system (SUS) provides free access to healthcare for all, it is underfunded, and by 19 June, the intensive care unit capacity in Amazonas, Ceara and Rio de Janeiro states was at 90 percent.

A commentary published by The Lancet estimated that only nine percent of community health workers who provide primary health care in the public health system have access to adequate PPE and infection control training.

Medecins Sans Frontieres (MSF) reported that “a lack of tests and inadequate testing was not helping the authorities prepare for the crisis or give its people the right message about the need for caution and social distancing.”

Due to the response from the national government, communities have responded to the pandemic at local levels. Examples of this include favelas implementing their own hygiene and physical distancing measures, and rural communities working together to identify sources of food, water and hygiene products and shelter for vulnerable people.

Decisive leadership by President Bolsonaro and the Government, following sound scientific evidence and provision of more support to vulnerable communities, is needed to stop the situation in Brazil becoming even more devastating. 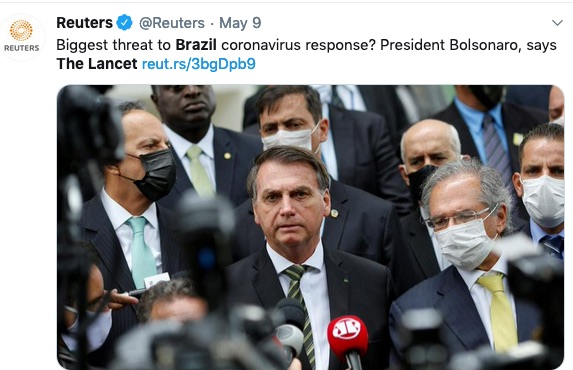 How to fix the COVID-19 dumpster fire in the US

“There’s no point in sugar-coating this,” Helen Branswell wrote. “The US response to the COVID-19 pandemic is a raging dumpster fire.”

Much of the progress made while parts of the country were under lockdown between March and May is now being reversed.

Large numbers of COVID-19 cases are being recorded every day, and cases are rising in some states including California, Arizona, Texas and Florida. The number of COVID-19 deaths each day is also increasing; on 21 July, 1,000 deaths were recorded, which is the most deaths from COVID-19 in a single day since the beginning of June.

Some, but not all, of the factors that may be influencing the situation in the US include: President Trump’s disregard for the seriousness of the pandemic and public health recommendations such as mask wearing; some states reopening earlier than recommended by the Centers for Disease Control and Prevention (CDC); and delays in testing.

Public health experts say that “widespread returns to lockdown must be a last resort – and may not be doable” because of the social, financial and emotional toll.

Some recommendations by public health experts in the US for changing the course of COVID-19 include:

None is a magic bullet. This is going to be a painful and slow process.

But there are things individuals, public health departments, state and local governments and the Trump administration can do.”

South Korea was successful in flattening the curve by the middle of April. Nightclubs in Seoul reopened on 30 April at the beginning of a holiday weekend, after a period of being temporarily closed to help prevent the spread of COVID-19.

Many people visited a well-known nightclub region in Seoul, Itaewon, over the holiday weekend; and from 6 May, some cases of COVID-19 were identified in people who had visited Itaewon nightclubs that weekend.

Through wide-spread contact tracing and testing, and mass media announcements, a total of 246 cases of COVID-19 were confirmed to be linked to the nightclubs on the holiday weekend. 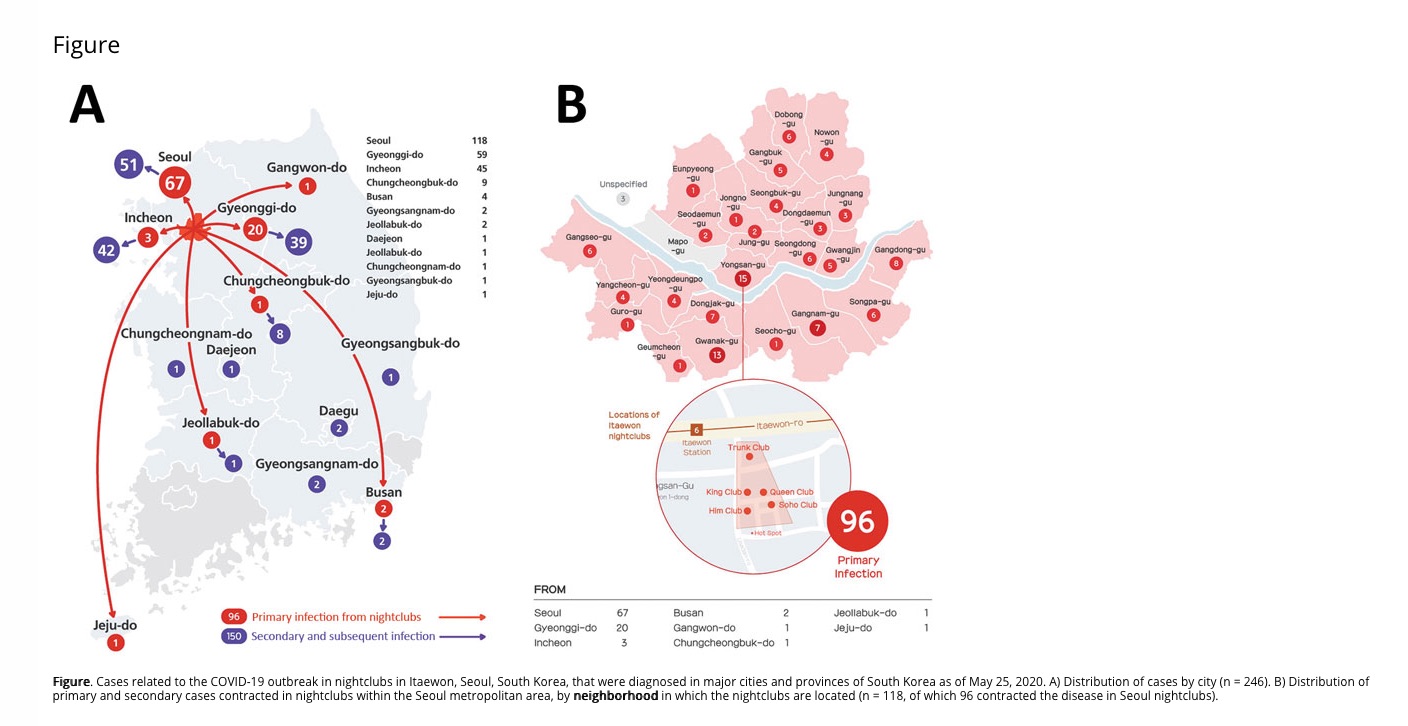 Seoul’s Metropolitan Government and Metropolitan Police Agency were quick to respond to the outbreak and conducted contact tracing by using cell phone location and credit card data and lists of nightclub visitors.

Text messages encouraging testing were sent to 57,536 people who had been identified, by their cell phone location data, to have spent more than half an hour in the nightclub area.

Due to rumours being spread in the media that this outbreak originated among gay men, there were concerns that stigma would prevent nightclub visitors coming forward to get tested.

The Metropolitan Government consulted with sexual-minority groups to learn ways of engaging with the community and how best to encourage testing. As a result, anonymous testing was introduced and advertised via mass media.

By 25 May, 41,612 tests had been conducted in relation to the nightclub outbreak.

Quick action by the Seoul Government, use of technology for contact tracing and consultation with minority groups enabled the widespread testing and identification of 246 people with COVID-19 linked to the Itaewon nightclub outbreak.

Throughout the pandemic in New Zealand, Dr Siouxsie Wiles and Toby Morris have been working together to create animations and illustrations to explain key COVID-19 concepts.

They are all available in one location on The Spinoff website here. They are available for republication under a Creative Commons CC-BY-SA-4.0 licence, which means you are free to use them providing you give credit and share under the same conditions (read more here). 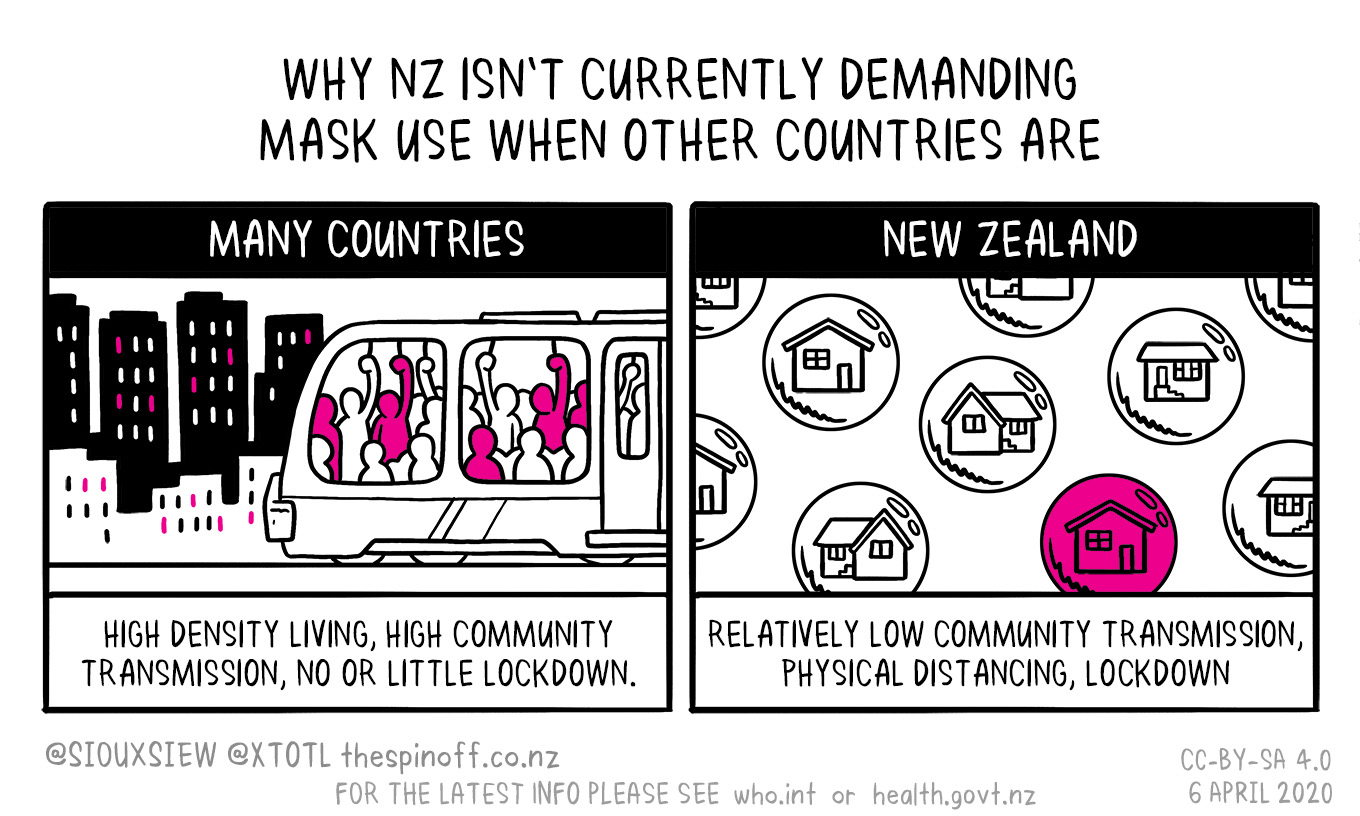