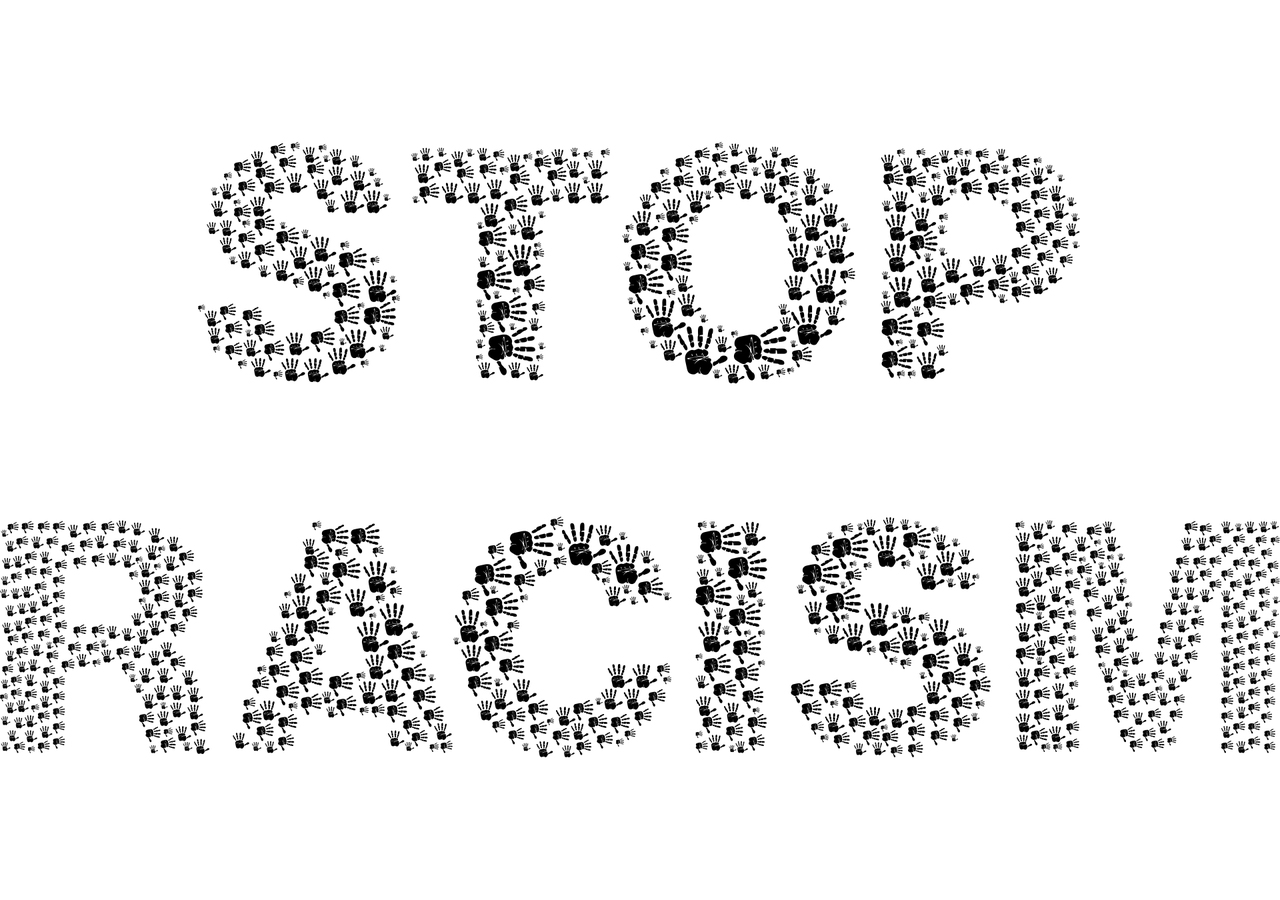 In her final story from the 21st International Conference on Emergency Medicine, Dr Amy Coopes reports on a call to decolonise healthcare, and for health workers to challenge “inequity and injustice in their work”.

Bookmark this link for additional coverage of the conference.

Structural inequities and injustices as a legacy of colonisation can only be dismantled by acknowledging that a script of subjugation continues to be played out in healthcare settings, perpetuating a cycle of prejudice and ill health for oppressed peoples.

Disrupting this narrative is urgent work for all healthcare professionals, and begins with reflexive action, interrogating the motivations, power imbalances and potential for oppression, violence and injustice in our practices and approaches in health.

These were the central messages of a compelling call to action for emergency doctors at a recent global summit held in Melbourne centred on the themes of equity, sustainability and innovation.

Dr Seye Abimbola, editor-in-chief of BMJ Global Health, and a health systems researcher from Nigeria, laid out the imperative for decolonising global health in an acclaimed address to the 21st International Conference on Emergency Medicine, a hybrid online-in person event that brought together some 1,500 delegates from more than 65 nations earlier this month.

Abimbola, the current Prince Claus Chair in Development and Equity at Utrecht University in the Netherlands and a senior lecturer in global health at the University of Sydney, urged those present to speak openly about the challenges of inequity and injustice in their work.

He asked them to confront the ways in which they were contributing at a structural level through an ongoing script of colonisation that merely entrenched systemic violence and oppression.

“When we talk about decolonisation we are referring to the re-enactment of colonial models and power relations in international partnerships,” Abimbola said, explaining that the first step in disrupting this process was being reflexive about our own role in driving it.

He offered a six-step triage process for doctors and others working in global health aimed at ensuring more equitable partnerships through humility and ethical praxis, urging colleagues to ask themselves the following questions:

Abimbola stressed the importance of the principle of subsidiarity, emphasising that decisions affecting a population ought to be made as proximal to them as possible, recognising and drawing upon their inherent resources, rather than imposed by a powerful and distant entity.

Decolonising research was also an essential part of the decolonisation agenda in global health, Abimbola said, presenting a framework for equitable authorship in health research that demanded local involvement in study design, and acknowledgement of their leadership.

Additionally, contribution and ownership of the work as well as their role in data collection, access to said data, and using it to develop analytical and writing skills within the partnership are critical to decolonising research.

The framework also calls for research to address local research and policy priorities and contribute to improved local infrastructure. It expects that funding supports local research teams, that early career researchers are prioritised for inclusion and that it contributes to their training.

As well, the framework says participants and researchers should be safeguarded against harm, and that gender balance is addressed.

A number of international delegates from resource-limited and lower-income settings presented at #ICEM22 on their experiences of positive and productive donor partnerships.

Equitable health service provision for colonised First Nations peoples was in focus on the second day of ICEM, with a number of sessions devoted to the subject.

Tomash said this was the product of conscious and unconscious biases that needed to be interrogated by every healthcare worker at an individual level, and which he said put patients at unacceptable risk.

Bundle said the presence of Indigenous artwork and possum skin cloaks was so much more than cosmetic in a healthcare setting.

She also pointed to the importance of acknowledging and marking significant days on the calendar for Aboriginal and Torres Strait Islander peoples beyond mere tokenism and committing to the virtues they espoused year-round.

Professor Greg Phillips, Waanyi/Jaru, a medical anthropologist and CEO of ABSTARR Consulting, said recognising privilege and white fragility on an individual and systemic level within the health system was a confronting but urgent priority that called for listening and unlearning by clinicians.

“Cultural safety is a nice euphemism for racism in the health system,” he told conference delegates, arguing that intent needed to be separated from effect, and tackling racism was core to improving clinical safety.

Phillips said racism was a public health issue requiring systemic reform, with the impacts of race discrimination and colonisation still very real for First Nations people, and healthcare professionals too often the vectors.

He called on delegates to do the “emotional labour” to recognise the role of white privilege in this space.

“We talk about this issue as if we need to fit Aboriginal people into a Western health system, but we need to blend Aboriginal and health system paradigms to close the gap in health disparities. How do we blend these cultures to create a best possible healthcare system?”

Phillips said Aboriginal representation at every level was pivotal to this process, as was rewriting health curricula and integration of culture, educating and accrediting a culturally safe health care workforce, with appropriate regulatory and legal safeguards.

It highlighted what she said could sometimes be conflicting imperatives between the media – where the story and public attention was the currency, no matter and sometimes contingent upon the exploitative cost – and efforts on the ground focused on local strengths and resources.

The central question, Chandler posed, was whether reportage made a difference, which she said was on balance typically hard to glean.

In the case of MDR-TB in PNG, while she said while it was important not to infer causation, an urgent responsive mobilisation of resources followed publication of her work, and there was an injection of funds into efforts by the global community.

Read Coopes’ Twitter thread from the session on global emergency care in a post-pandemic world.

See more on these presentations in this Twitter summary. 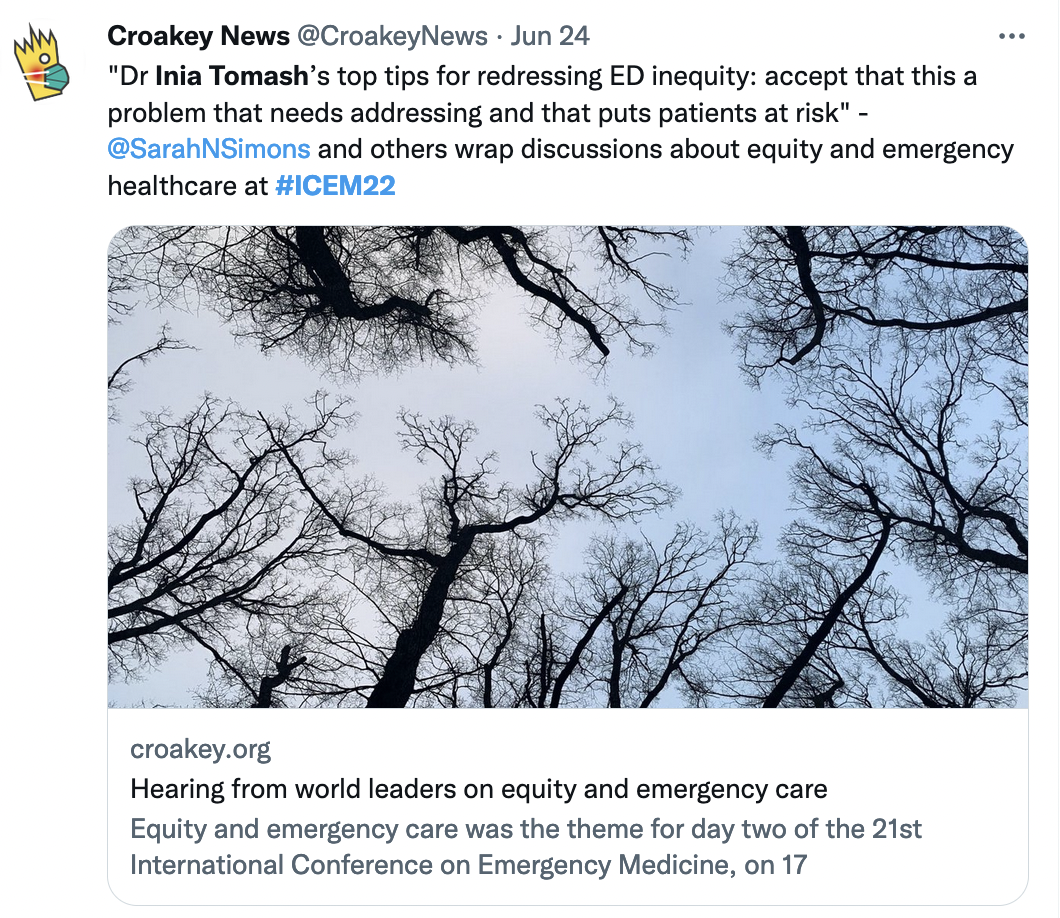 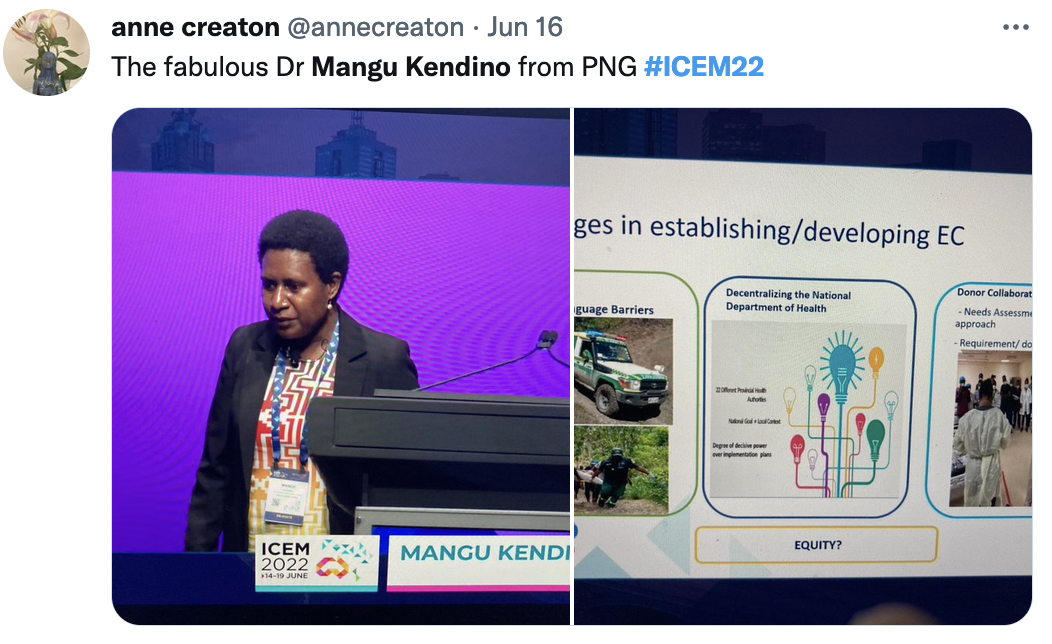 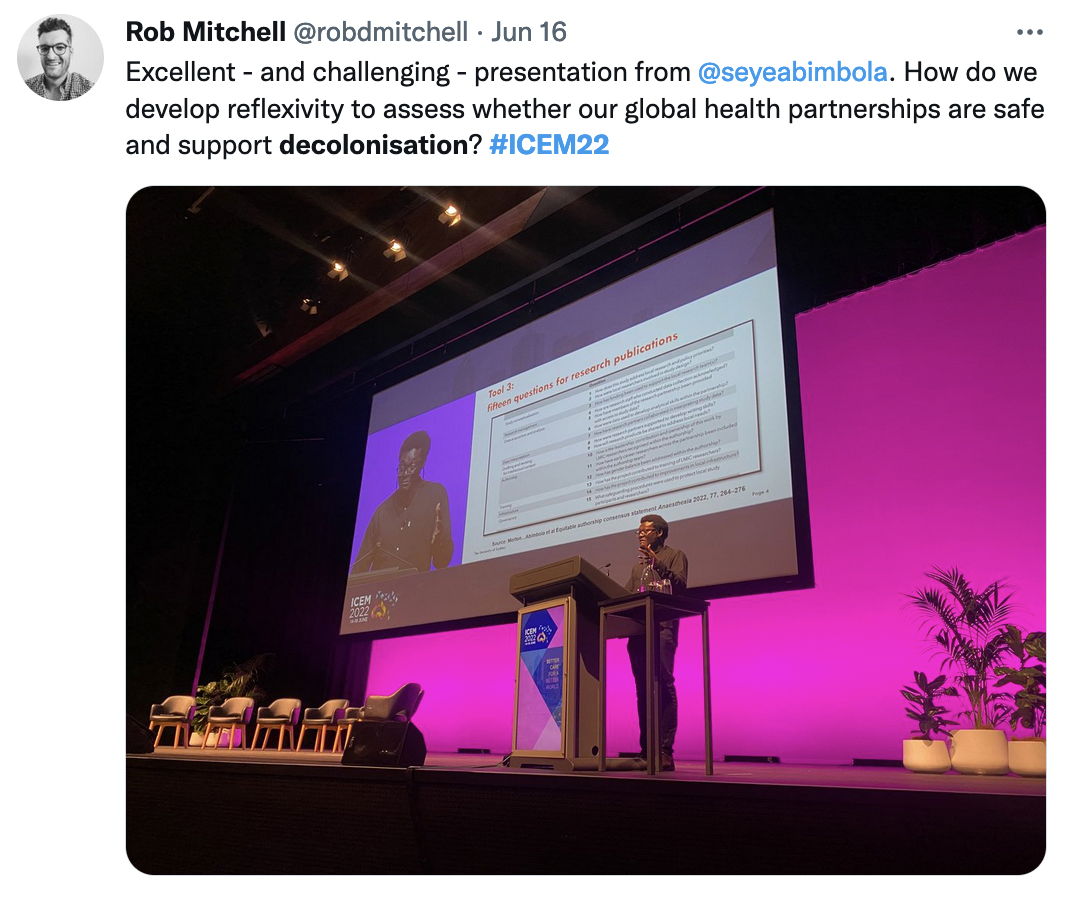 Dr Amy Coopes was in virtual attendance at the International Conference for Emergency Medicine for the Croakey Conference News Service. Follow her at @coopesdetat for her Tweets from the conference.

Thanks to Alison Barrett and Sarah Simons for additional coverage contributing to this report.