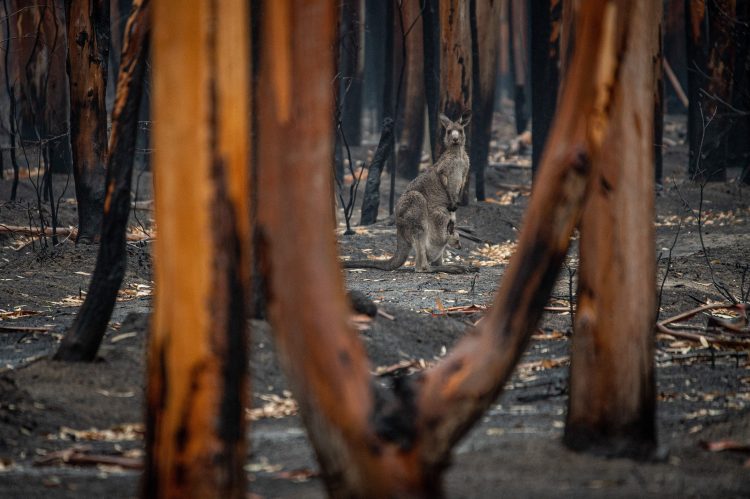 A new report estimating that some 65,000 Australians were displaced by last summer’s catastrophic bushfires has underscored the disproportionate impacts on Aboriginal communities and stressed the importance of climate change policy and risk reduction, including Indigenous land management strategies.

It estimates that around 65,000 people were internally displaced by the disaster, some 8,100 of whom lost their homes, meaning longer-term dislocation. The fires killed 33 people and some three billion animals, choking half the population with toxic smoke.

Australians do not tend to think of their country as being affected by internal displacement, or as being home to internally displaced people.

The Black Summer bushfires, however, which triggered 64,579 new displacements, show that it is not immune to the phenomenon.”

While the scale of these impacts was unprecedented, the report said Indigenous communities were disproportionately affected, with more than one-third of Australia’s Aboriginal and Torres Strait Islander population living in New South Wales and Victoria — the two worst-affected states — one quarter of these in fire-affected areas. For comparison, one in 10 Australians in the broader population were estimated to live in a fire zone, the report said.

“Some of the towns affected by the fires were 100 percent Indigenous Australian,” it said.

In NSW, the IDMC said people from at least 50 of the state’s 120 local Aboriginal Land Council areas were displaced by the fires, and 10 of the 17 families who fled fires in the worst-hit areas of Mogo, Eden and Cobargo were still homeless. Lower levels of home ownership among Indigenous people (38 percent, compared with 66 percent among the non-Indigenous population) increased their risk of longer-term displacement, with no protection for renters who lost their homes to disasters, it added.

Even for those who did not lose their homes, the report said the fires had been devastating for Aboriginal and Torres Strait Islander peoples, with widespread loss of sacred and culturally significant sites. In the Greater Blue Mountains World Heritage Area west of Sydney, home for millennia to six nations recognised as the traditional owners, 80 percent of the land mass had been razed.

“Australian laws have partially returned land to Indigenous Australians in recent decades, but the evacuations still served as a reminder of the collective trauma of permanent displacement dating back to the time of colonisation,” the report said.

The disaster also underscored the inadequacy and inappropriateness of colonial land management approaches, renewing interest in Indigenous cultivation practices such as cultural burns, added the report.

The report said the 65,000 displacement figure was “almost certainly an underestimate” because it was based on Red Cross registrations, which primarily captured those who sought shelter in an official evacuation centre. Comparing formal figures with media reports alone suggested the actual number was an order of magnitude higher, the IDMC said.

There were also notable social and demographic trends, it found.

Displaced people were more likely to be female (52 percent); 20 percent were children, a group with particular needs and recovery profile. For example, it said about 8,000 school-aged children had been displaced, while the fires had forced the closure of around 600 schools and destroyed two. Within evacuation centres, the IDMC said specific services for children “were extremely limited and their needs were often overlooked”, with no government funding for their support.

According to Facebook data featured in the report, women were more likely to have evacuated early, and to have done so on government advice or on the decision of a family member. This was important for planning and tailoring evacuation responses to better meet the needs of women and children, the report said.

In particular, it noted the increased vulnerability of women at risk of domestic abuse, with experiences of intimidation and physical harm at the hands of former partners documented in evacuation centres, and others having to rely on perpetrators for shelter, food and other support, “sometimes in breach of court orders forbidding contact”.

The report also detailed some of the challenges for health care provision during the crisis:

A number of private family doctors tried to set up impromptu practices next to evacuation centres to provide mental health support and emergency medication to their displaced patients, but they were prevented from doing so because they were not part of the official response team. Road closures also impeded the supply of medical equipment, including oxygen cylinders.

This has prompted calls for a national framework that embeds doctors and community pharmacies in emergency evacuation plans and ensures that those forced to flee their homes are able to receive the mental and physical healthcare they need.”

It estimated the total ongoing annual cost of housing displaced people alone at up to $72 million, with untold impacts on their livelihoods and ability to work.

“This represents a potentially enormous financial burden for those displaced for long periods and could heighten their preexisting vulnerabilities and deepen their socioeconomic hardship,” the report said.

There was “compelling evidence” to link the trend of longer and more intense bushfire seasons to climate change, the report said, citing research that showed the risk of extreme fire conditions like those seen in Australia last summer had been increased “by at least 30 percent and possibly much more” as a result of the climate crisis.

Given Australia was one of the world’s biggest per capita emitters and one of the largest exporters of coal, its climate policy was “particularly relevant” to its ongoing risk of such disasters, IDMC said:

The Climate Change Performance Index gave Australia an overall rating of “very low” in 2020 and experts have observed a lack of national progress in reducing emissions in line with 2030 targets and developing a long-term mitigation strategy.

The enormous human, environmental and financial cost of the Black Summer fires, including the displacement they triggered, high-lights the value of investing in climate change mitigation strategies that reduce the intensity of such hazards and communities’ vulnerability to them.”

It cited UNSW urban design expert Scott Hawken, who said Australia was “not fighting a battle against nature”.

“These are socially constructed disasters, not just in terms of climate change, but in terms of the reactive response rather than long-term planning,” Hawken said.

The IDMC commended the NSW government for committing to adopt all 76 recommendations of the recent state inquiry into the fires, including incorporation of climate change into bushfire management planning, resilience and mitigation strategies, recognising the needs of vulnerable populations in evacuation frameworks, and ensuring Aboriginal and Torres Strait Islander Australians are included in emergency planning and preparation.

“As experts warn that bushfires will become more frequent and intense in the years to come, adopting such measures and enhancing the collection of displacement data disaggregated by sex, age and Indigenous status could play a vital role in reducing risk, strengthening resilience and minimising the negative impacts of displacement.”

This article is published as part of Croakey’s ongoing contribution to the Covering Climate Now initiative, an unprecedented collaboration that involved more than 300 media outlets around the world in the leadup to a Climate Action Summit at the United Nations General Assembly in New York on 23 September. It is co-founded by The Nation and the Columbia Journalism Review (CJR), in partnership with The Guardian. Croakey invites our readers, contributors and social media followers to engage with these critical discussions, using the hashtag #CoveringClimateNow. See Croakey’s archive of climate and health coverage.