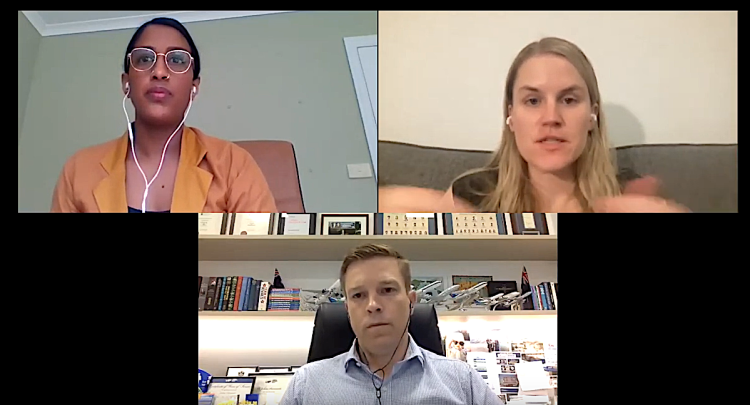 Introduction by Croakey: A Facebook whistleblower has urged the Australian Government to be a global leader on regulation to stem the dangers the tech giant poses to individuals, communities and democracy.

The call came as leading not-for-profit media outlet The Conversation urged the government to take on Facebook over its failures to negotiate payments, under Australia’s world-first mandatory media bargaining code, with it, SBS and many smaller, independent media outlets.

Facebook whistleblower Frances Haugen today warned Australian MPs and Senators not to trust the tech giant’s promises that it is working to make its platform safer and encouraged Australia to step up as a leader for smaller countries across the globe to rein in its power and abuses.

Haugen delivered damning testimony to the US Senate last month on how Facebook products “harm children, stoke division, and weaken our democracy”, warning that the company knows how to make its platforms safer but puts “astronomical profits ahead of people”.

The former Facebook product manager who had previously worked at Google and Pinterest, also encouraged Australian politicians to protect whistleblowers, saying the rapid pace of change in technology meant “the only people who will understand what is happening inside these companies are the employees themselves”

Haugen was speaking at an online briefing session with Australian MPs, co-hosted by Liberal MP Julian Simmonds and Reset Australia, the Australian arm of a global initiative tackling digital threats to democracy, where she was hailed for her courage in speaking out.

“One of the most important things governments can do is stop just trusting Facebook when they say ‘we are working on x’ or ‘we have done x’,” she told the session, saying regulators required evidence from other industries, like car manufacturers, to prove public safety was assured.

Haugen also warned that Facebook had little interest in providing safer platforms for smaller nations, and particularly those that did not speak English, saying it had been “unwilling to invest additional resources in fighting these problems even in the US, (so) there is no way smaller countries are going to be kept safe unless they have some control”.

But she said Australia had the opportunity to “organise other smaller countries, be a leader on the world stage”. Smaller nations, home to billions of people, “deserve to be treated as equal citizens with equal rights and dignity” as bigger nations of more interest to Facebook.

“The reality is you do matter and you have a lot of power,” she said, offering a range of suggestions so regulators and researchers could identify and track the spread of misinformation or extremist material across its platforms, identify system issues and test Facebook’s efforts to address them.

“There is no way that Facebook can act in a safe way globally, without sharing data. There’s no way smaller countries are going to be able to kept safe, unless they can access their data.”

During the hour-long briefing, Haugen canvassed some of the major concerns she had testified on to the US Senate, including that Facebook knew Instagram users were being led to anorexia-related content, and that its algorithms meant people were quickly led from interest in mainstream politics to extremes.

She referred to recent reports in the Wall Street Journal, rebuffed by Facebook, that a Facebook team estimated its systems were removing only three to five percent of the views of hate speech on the platform, and only 0.6 percent of all content that violated Facebook’s policies against violence and incitement.

A number of journalists attended but were not invited to ask questions. However a recording of the briefing was later made available to Croakey and other media by Reset Australia, which also today released a policy memo — ‘Facebook versus Democracy: Is Australia’s election under threat?’ — which outlines policy directions Australia could take to rein in the tech company.

Time to move fast and fix it

Haugen’s call for greater regulation and scrutiny of Facebook in Australia came as non-profit publisher The Conversation urged Treasurer Josh Frydenberg to “designate” Facebook under the News Media Bargaining Code to force the platform to negotiate payment for all publishers who genuinely serve the public interest.

In a statement to donors and supporters, The Conversation editor Misha Ketchell cited Haugen’s testimony that Facebook knows its algorithms spread dangerous misinformation but the company is unwilling to act for fear of fewer clicks and lower profits.

Ketchell said: “Mark Zuckerberg’s motto used to be “move fast and break things”. Now the broken thing is Facebook. It’s time for us to move fast, and fix it, before it does any more damage.” 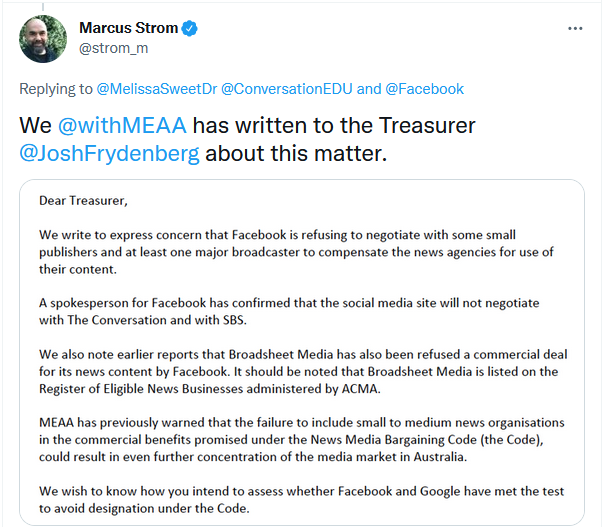 However, The Conversation’s concerns also highlight ethical issues for media outlets in Australia, including Croakey, where they need to negotiate deals with Facebook under the Australian Government’s News Media Bargaining Code, set up to redirect some of the revenue amassed by Facebook and Google back to Australian media companies.

Ketchell said that Google agreed to fund The Conversation under the Commonwealth Code but Facebook refused, without providing a reason, as it had with SBS, “and many other quality media companies eligible under the Code”.

“This places us in a difficult position,” he said. “We don’t want to give up on reaching Facebook’s vast audiences, but nor do we want to give Facebook an undeserved veneer of respectability.”

See this earlier Croakey story regarding overall concerns about the deals that have been put in place, behind closed doors, with media companies like News Corp and Nine by Google and Facebook and what their value or costs are – to journalism and to democracy.

It is being administered by the Walkley Foundation, which hosts Australia’s most prestigious journalism awards and whose mission is “to celebrate and support great Australian journalism”.

Ketchell said the Facebook Australian News Fund was “designed to placate media that (Facebook) refuses to negotiate with under the Code”. Therefore The Conversation had decided not to apply for these grants, he said.

Croakey editor in chief Dr Melissa Sweet said The Conversation’s announcement on the grants “underscores concerns” about the Walkleys being part of the Facebook arrangement.

“It also highlights ethical dilemmas for journalists and media organisations about applying for these grants,” she said in a Twitter thread, adding that it reminded her of debates decades ago about whether health organisations and researchers should take money from tobacco companies.

Lawrence Gibbons, publisher of the Star Observer and City Hub magazines, also has concerns about the Walkley Foundation’s involvement, given that organisations that already have a content licensing agreement in place with Facebook are not eligible to apply.

This was “outrageous”, he said, “because they’re using their market force and position to twist the arms of little guys who may not think that they have the clout or ability to use the bargaining code to get money out of Facebook so they’re going to go to Facebook cap in hand through the Walkley Foundation grant application.”

Gibbons questioned the ethics of how the Walkley Foundation, as a platform for strengthening journalism, “is able to take money from Facebook and participate in this silencing of small media publishing operators”, saying Facebook has done more to “erode the credibility of the Fourth Estate than most businesses in a lifetime”.

“It’s completely eroded public trust in journalists, and government, all authority because all its information is delivered through this kind of Hall of Mirrors where you only hear what they think you want to hear and reinforces your opinion,” he said. “Everything is distorted through your prejudices and opinions … that’s the antithesis of what the Fourth Estate does.”

Despite its reservations about the way Facebook operates, Ketchell said The Conversation should not be treated differently to other media outlets and did not want to “let Facebook off the hook”.

It urged supporters to write to their local MPs to urge Frydenberg to act, and to sign this petition that will be tabled in the House of Representatives ahead of a review of the Code in March 2022.

Reset Australia said it organised the briefing with the upcoming federal election in mind, saying that Haugen’s insider knowledge made clear that “unregulated Big Tech is just as dangerous in Australia as it has been in the United States”.

Its policy memo sets out a timeline of ‘Facebook’s power over politics and information’, dating back to its role in 2016 of undermining the political process in the Philippines election concerns and Russian interference in the US presidential election.

It includes how Facebook ‘switched off the news’ in Australia, in the midst of the pandemic, over its opposition to having to pay news media outlets for content, and had failed to remove bogus death tax claims circulated during the 2018 federal election.

It is calling for robust regulation of Facebook which is enforced by independent arbitrators and written by policymakers, not the industry, and for a shift in scrutiny towards systemic issues, rather than focusing on content takedowns and user identification, saying “design features and algorithms that promote harmful content are at the root of the problem, and need to be tackled”

See also Croakey’s story, published this week, on how the Federal Government is sitting on an important assessment of digital industry self-regulation of efforts to address misinformation and disinformation, which has been described as “shameful and pointless” by public health and media experts.

PrevPreviousIn a public health emergency, the Government is sitting on a critical report on misinformation and disinformation
NextClimate health experts declare code red for the world, while Australia is stuck on a limbNext