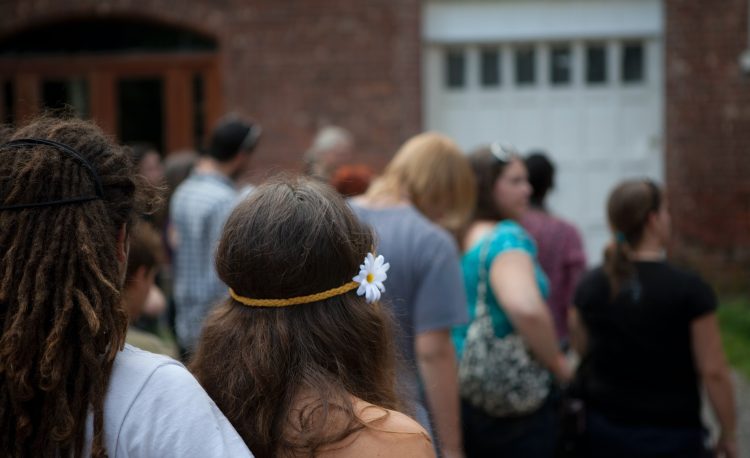 Introduction by Croakey: As the Lismore local government area heads back into lockdown, after a COVID-positive case was confirmed in the area late yesterday, it’s timely to consider how to boost vaccination rates in the region.

Nestled in the NSW Northern Rivers region, known as the anti-vaccination capital of Australia, the Lismore local government area has one of the state’s lowest COVID-19 vaccination rates (as of 5 September, 57.5 percent of the population has received at least one vaccination, and 31.3 percent were fully vaccinated). The region has also seen heated responses to previous COVID-19 restrictions.

Virologist Dr Sue Rodger-Withers, a former long-time Nimbin resident, writes below that many so-called neo-hippies in the NSW Northern Rivers region are veering far from the intellectual and scientific stands of their predecessors.

To head off the risk that poses to public health, she says authorities and the local community may need to change the way messaging is directed for them.

Last month, the Northern Rivers region in New South Wales – known as the  anti-vaccination capital of Australia — went into lockdown after a man and his two teenage children, who tested positive for COVID-19, travelled illegally out of Sydney lockdown into the area.

Outrage erupted and pleas for calm went unheard. It now defies belief that locals then attended recent protests, in Sydney, Brisbane and the border regions, without concern of returning to their communities infected with COVID-19. Social media exploded in rancour, yet the protests continued. Where is the Rainbow Region heading?

Death of Hippie was a mock funeral staged in the United States in 1967 meant to signal the end of the Summer of Love. To me, an old hippie* now watching the Northern Rivers respond to the risks of COVID-19, the question arises: is the coronavirus pandemic rebooting the Death of Hippie?

Since the 1973 Aquarius Festival in Nimbin, many original hippies have moved on from the Northern Rivers, and it is now home to a very mixed community comprising various iterations of hippies, including those who still would identify with older hippies, techno-hippies (Zippies), and those seeking to displace long-term residents and sell a neo-romanticised 2020 version of hippie, at times literally ‘selling’ via tailored communal land developments

So-called “neo hippies” are at odds with their 1960 counterparts.

Firstly, in my experience, many lack tolerance and acceptance of others. Secondly, anti-intellectualism and denialism is favoured over science and logic. Thirdly, they may value self-interest over community welfare. In fact it is the antithesis of my young hippie days; an opinion shared by other hippies.

Combined, these traits hinder rather than promote harmonious communities. An individual’s “worthiness” to live in the Northern Rivers is often judged by one’s stance on a single issue, such as choosing chemotherapy over cannabis oil for cancer.

I know because I was a hippie virologist at the Aquarius Festival and until recently lived in Nimbin for 15 years.

Many neo-hippies have forgotten that the hippie movement originated in universities by intellectuals with backgrounds that developed the self-sustaining, eco-friendly homes nesting in the rainforests throughout the Northern Rivers today. Instead they seek a highly commodified version of hippies that never existed.

To an older hippie, the events unfolding in the Northern Rivers since the arrival of COVID-19 resemble a bad acid flashback – a stark reminder of those that destroyed the original hippie movement. But it’s worse. Neo-hippies begin behind the eight-ball because, unlike  their forerunners, they are already a divided people and division favours defeat. Add escalating unrest and violence to exploitation of the region and history may well repeat.

Just as the Haight Asbury ‘Summer of Love’ devolved at the hands of external violent criminals, drug dealers and those exploiting the failing hippie experiment, Northern Rivers neo-hippies are following the cookie trail. There are early signs of some following their counterparts in the US, who increasingly embrace right-wing extremist groups. These groups have no interest in neo-hippie ideals or public health — they seek to bolster only their own agendas by further dividing communities through disruption, violence, misinformation, and recruitment.

The key to surviving a pandemic is adaptation and collaboration not division and conflating safety measures with oppression. After violence and murder at the hands of Hells Angels employed as security at the Altamont concert in 1969, Chip Monck, veteran hippie stage and lighting manager stated, “The genie was out of the bottle and the bottle broke,” and added “That was the end of our collective dream.”

Unification is lacking now in the Northern Regions on COVID-19 and unless the neo-hippies of the Northern Rivers pull together to overcome an infectious agent that won’t be denied, the Death of Hippie may very well be rebooted. And worse the Northern Rivers may become remembered as an epicentre for the spread of COVID-19 throughout Australia.

Or they could return to their harmonious hippie roots, ignore disruptive and divisive external influences and by example lead the unification of Australians against COVID-19. So far calls for communal cooperation and unity from hippie elders have been welcomed and applauded, yet support for protests continue. So, current public health messaging is unlikely to be helpful.

However, many regional hippie elders accept the benefits of immunisation, as many are old enough to recall the vulnerability/risks of life before polio and other vaccines.

Perhaps working with them to frame messaging within the world-views and belief systems of the region may help reunite the area.

Dr Sue Rodger-Withers PhD, MASM is an infectious diseases virologist, having been tied to the Northern Rivers since the 1973 Aquarius Festival. She is a Member of the Australian Society for Microbiology and Member of the Immunization Coalition.

Author note: On the spelling of hippie – this has been debated for years. Most original hippies (60s era) spelled it hippie. Then over the years, people attempted to define the difference between hippie and hippy – the former being original and the latter being a commercialised/idealised version. Also, hippy was avoided as it also means a person with wide hips. Having said that, both are in use these days, and neither are right or wrong. Personally, I prefer hippie.