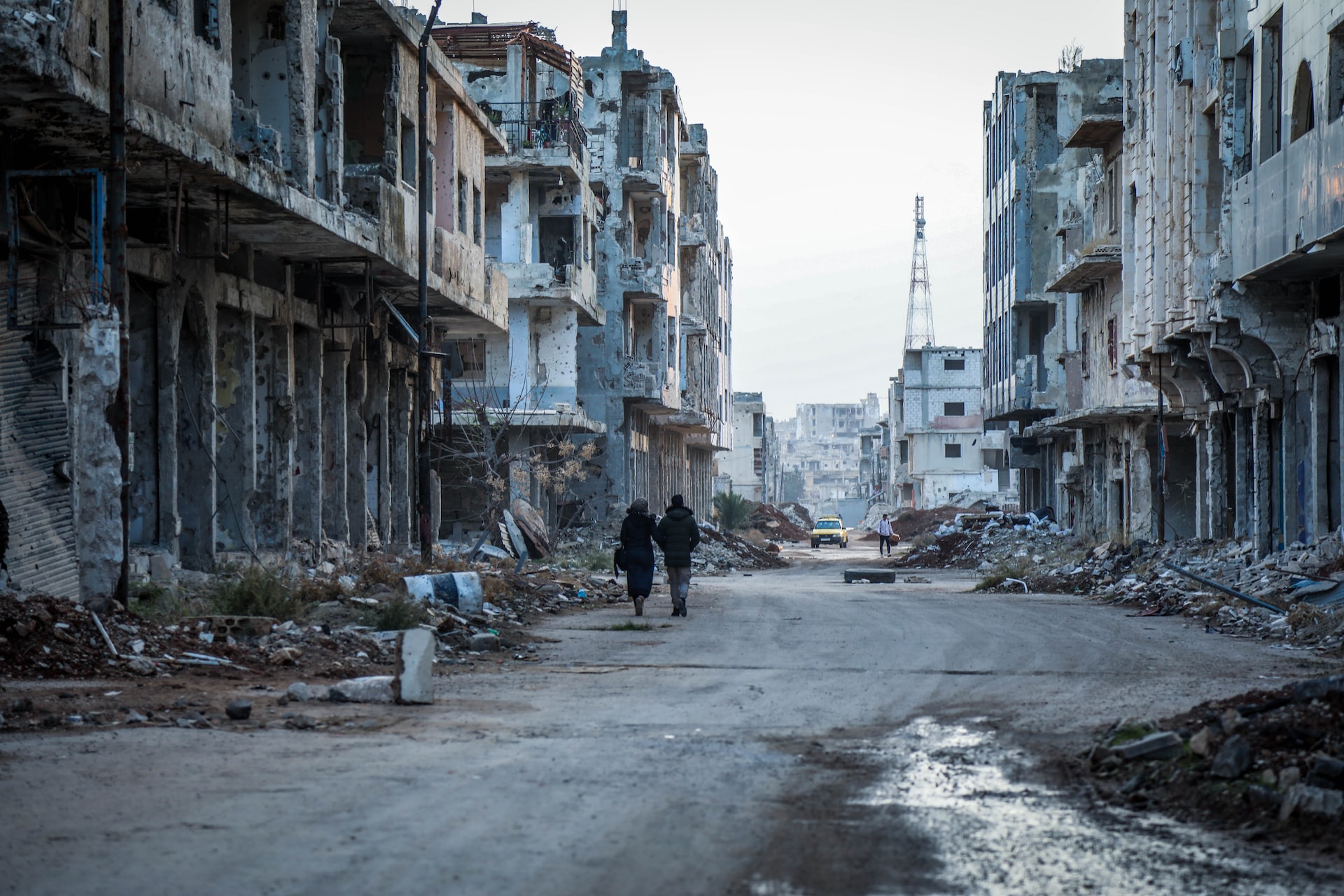 Introduction by Croakey: International aid and human rights organisations this week welcomed the reported decision by the Federal Government to repatriate Australian women and their children from camps in north-east Syria.

Although the Government has made no official announcement and details remain under wraps, the NGOs said the news had the potential “to pave the way forward for these Australian citizens, who have suffered immensely over the past three years, to return home to their families and begin their recovery”.

An estimated 1,400 children have been repatriated from al Hol and Roj camps to their home countries since 2019, including the US, France, Germany, Denmark and Sweden.

As Croakey editor Cate Carrigan reports, the Government is now being warned to ensure support services are ready to help the evacuees.

The Federal Government has been urged to ensure it has the right trauma-informed care and health and mental health services in place when it repatriates the families of former ISIS fighters to Australia.

It’s also been encouraged to bring the family members to Australia in one group rather than in a staged operation in a bid to minimise anxiety and allow them to support each other.

Guardian Australia reported on Sunday the plan to evacuate the 20 women and their 40 children from the Hoj and Al-Hawl detention camps in north-east Syria but the details remain secret.

As detailed in a 2021 report from Save the Children, conditions in the two camps – set up between 2017 and 2019 as ISIS fell – are crowded, increasingly dangerous, have critically over-stretched services and little or no education for the 40,000 children who call them home.

After visiting the camps in July, Save the Children Australia CEO Mat Tinkler spoke of the children having untreated shrapnel wounds, of experiencing violence, losing loved ones, and having limited access to healthcare.

Dr Jamal Rifi, a south-west Sydney GP who has been working with the families, Islamic community and government organisations advocating for their return, said the situation in the camps had deteriorated since nine children were brought back to Australia in 2019.

Rifi, who is part of the Australian Family Network (AFN) advocacy group told Croakey the Federal Government should bring the remaining group back as one so that no-one is left behind not knowing when their turn will come.

“The situation over there is always risky and it’s better to bring the 20 families here in one group where they can support each other,” he said.

A past president of the Royal Australian and New Zealand College of Psychiatrists (RANZCP), Dr Louise Newman, said it was critical the women and children got the right support and had access to trauma-informed services in additional to health and mental health services.

As a child psychiatrist who has treated children born in detention with minimal access to support and education, Newman said it was crucial that health and mental health services are in place to meet the needs of the group when they arrive in Australia.

“The expectation would be that the government and security services have consulted with experts in the area to get some advice on what needs to be set up,” she told Croakey.

Newman was not aware of any discussions taking place with colleagues at the RANZCP but added that they could be being conducted in secret.

“They should be speaking to the College, the AMA, and trauma services directly to ascertain capacity,” she said.

Plan International Australia CEO Susanne Legena said: “The conditions these Australian children and their mothers have been subjected to are appalling, dangerous and inhumane — we agree that repatriation is the right thing to do.”

In a joint statement with other NGO groups, Legena said “…social reintegration and addressing severe trauma are complex processes, and it is critical that upon their return, the Australian Government has in place for these children — and their mothers — high quality, accessible and integrated support and reintegration services, in line with international best practices, available for as long into the future for as they are needed.

“We also call on the Government to recognise that many girls and young women were trafficked from Australia and forcibly married in Syria and to provide them with specialised, survivor-centred support on their return,” she said.

Rifi dismissed as ‘fear-mongering’ the comments of Shadow Home Affairs Minister Karen Andrews about the potential radicalisation of the women and children posing a risk to Australia.

“In my view it’s baseless and shameful that (Andrews) is trying to portray these poor kids as potential monsters and a risk to Australia,” he said.

Rifi said the group had been cleared by a recent ASIO security assessment and that the women had all agreed to wear monitoring devices.

He also pointed to the 2019 repatriation of nine minors, saying that, with the appropriate support, all had integrated seamlessly into their Sydney and Melbourne communities.

“There’s no evidence to suggest young children are radicalised. They are traumatised and very confused but that is different from saying they become extremist,” she said.

Newman said the needs of the group would be complex, with the women working through issues of guilt over raising children in these conditions, while the children had witnessed horror, lost loved ones, and seen others murdered.

She added that many of the women will also be experiencing trauma symptoms and depression and feeling that Australia has let them down by leaving them in the camps for so long.

And for women who were coerced, there is the trauma of abusive relationships and enforced pregnancies, she said.

Newman stressed that all these factors must be taken into account when planning services for these women and children.

“They will need trauma-focussed intervention” delivered by trained clinicians such as psychologists or child psychiatrists.

Newman said for children who had known nothing but life in the camps, there were likely to be ongoing problems with anxiety, depression, low self-esteem and fear of something terrible happening again.

Reflecting on the harms of detention, Rifi said, while different, the trauma suffered by the women and children in Syria was something he’d seen in numerous visits to Australia’s offshore detention facilities on Christmas Island, Nauru and Manus Island (now closed).

“Having visited and met with the families and listened to their stories, and seen them spending year after year in detention, I’ve witnessed the psychological and emotional impact of the loss of freedom,” he said.

His comments come amid calls from the Asylum Seeker Resource Centre (ASRC) for the evacuation of the remaining 216 refugees and asylum seekers still in Nauru and Papua New Guinea to allow them to rebuild their lives. 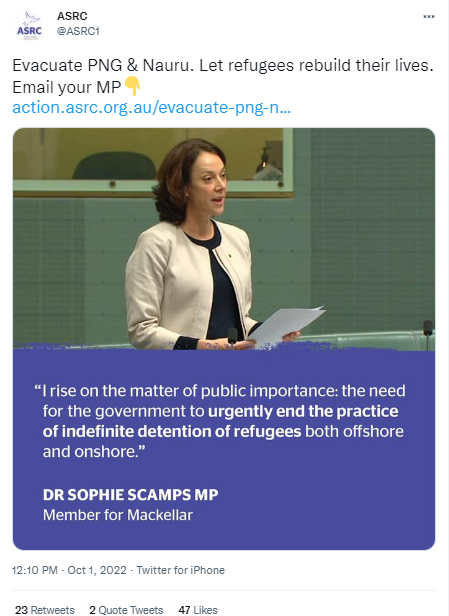 Rifi said the longer people remained in detention, the more detrimental the impact, and that appropriate support was crucial for their long-term wellbeing.

Marina Chand, a co-founder of the Brisbane-based World Wellness Group (WWG), which provides health services to refugees and asylum seekers, told Croakey the lack of security around their future for asylum seekers took a significant toll on their mental health.

Many asylum seekers can’t access Medicare and for others eligibility “comes and goes”, said Chand. “For them to be able to get access to primary health care is very difficult due to the cost”.

Chand explained that many of WWG’s clients have complex mental and physical health issues and those that had been in camps and detention had many conditions that had gone untreated.

“So, by the time they come and see us these conditions may have become chronic and that makes it more difficult to treat,” she said.

Chand said for people who’d been in the limbo of temporary visas for years, the stress was ongoing and made recovery very difficult.

“Clients often talk about feeling demoralised and humiliated because they are living in poverty and every request for help is difficult to meet because of their visa eligibility – everything is tied to that,“ she said.