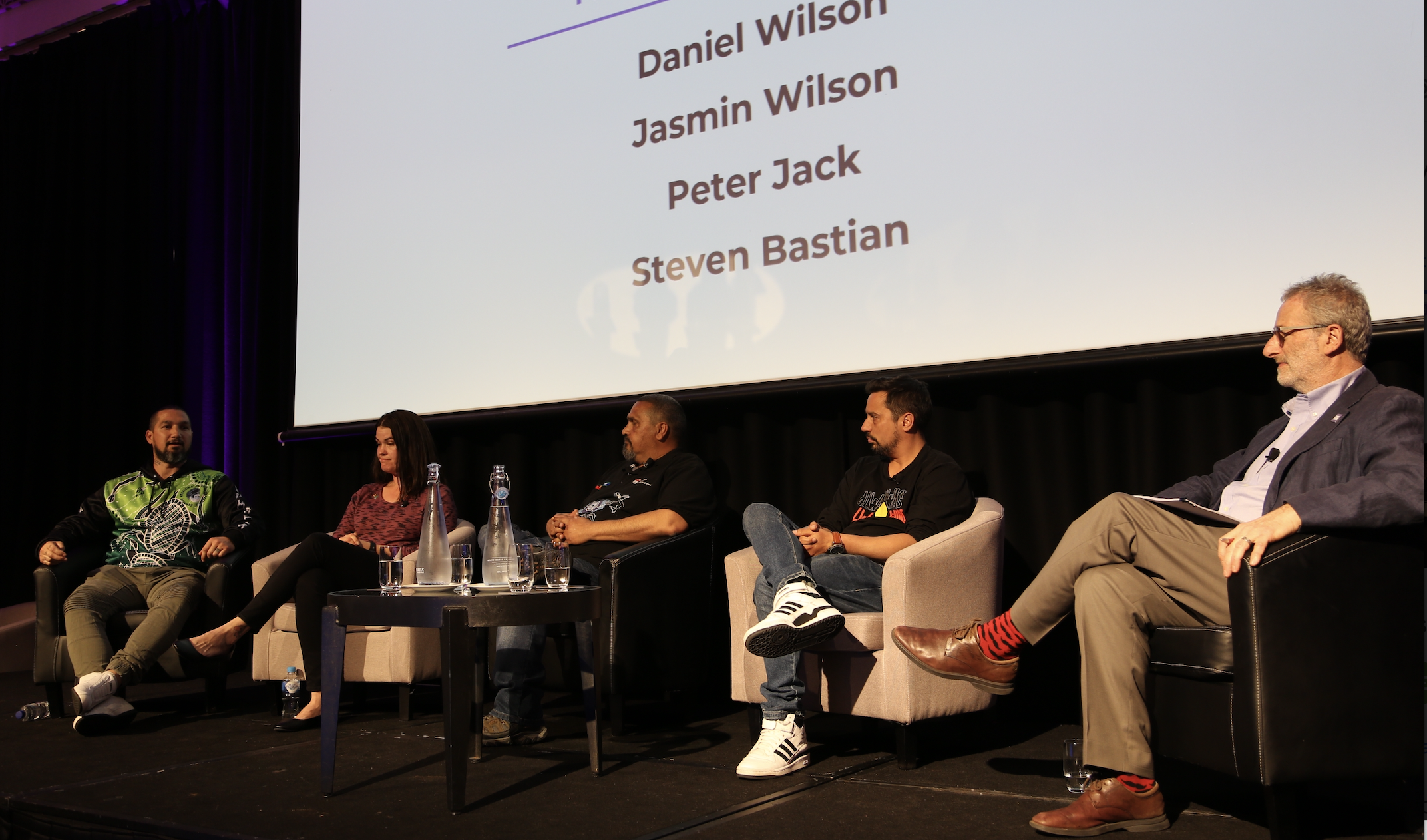 Introduction by Croakey: The power of family, connection, and community – and the need for culture to be at the heart of care – were clear messages from a panel discussion on issues for Aboriginal and Torres Strait Islander people at last week’s Rethink Addiction conference.

Marie McInerney reports below in her final article from the conference for Croakey Conference News Service.

For Daniel Wilson, support from his family, a sense of connection and community, and the strength of his ancestors were key to leading him out of heroin addiction two decades ago and into his work now at Melbourne’s Odyssey House treatment centre.

A senior alcohol and other drugs (AOD) clinician and Aboriginal and Torres Strait Islander cultural advisor, he told the recent Rethink Addiction national convention about his experience of addiction, of using heroin “nearly up to the point that it killed me”.

He had got to the stage, he said, where he “had no care for myself whatsoever”. He was “hobbling around on a blackened foot” due to infection, but didn’t want to ask for help because of the stigma and shame surrounding a heroin addiction.

Finally, barely able to walk, he limped into a hospital and began his recovery.

In a moving exchange during a Q&A session at the conference, Wilson was asked if he felt his body had somehow manifested the infection in his foot to lead him to seek care.

“It may have been my ancestors,” he acknowledged.

Prompted to expand, he said: “I guess I’m just always open to that [idea], that sometimes we’re guided by things that we don’t truly understand. So, I like to think that it’s my whole life struggle really to reconnect, reclaim my sense of identity, but inside there are intrinsic wisdoms and connections and pools and energies that I think have always guided me.”

Wilson was speaking in a lived experience session of the conference that highlighted the need for better treatment and support for Aboriginal and Torres Strait Islander people with alcohol, other drugs and gambling addictions.

Each of the speakers talked about the importance of family, of safe spaces, and the need to connect to culture and community. They also described the role of trauma in addiction, particularly for the Stolen Generations and their descendants, and new generations now being impacted by escalating rates and risks of child removal.

Jasmin Wilson, a member of the panel, wrote in this article for Croakey recently about the need for law reform and change across health, child protection and justice systems.

Daniel Wilson told the conference he realised that his heroin use and addiction was a substitute for the love and care his mother could not provide, “because she was taken from her family as a child”.

Now dad to a six-year-old daughter, he wants “to heal enough, so that I’m not passing that (trauma) on to her,” he said.

Acknowledging that many people at the conference had talked about “finding their tribes and how important it is to be connected to other people in some sort of a journey”, Wilson noted that, when he was admitted, Odyssey House was a mainstream service that didn’t have an Aboriginal program.

“But they are a community and work through a community sort of lens so that sense of belonging was enough to get me through,” he said.

Family support was also critical in being able to find enough physical and emotional safety to confront and wrestle with the underlying issues that contributed to his addiction. 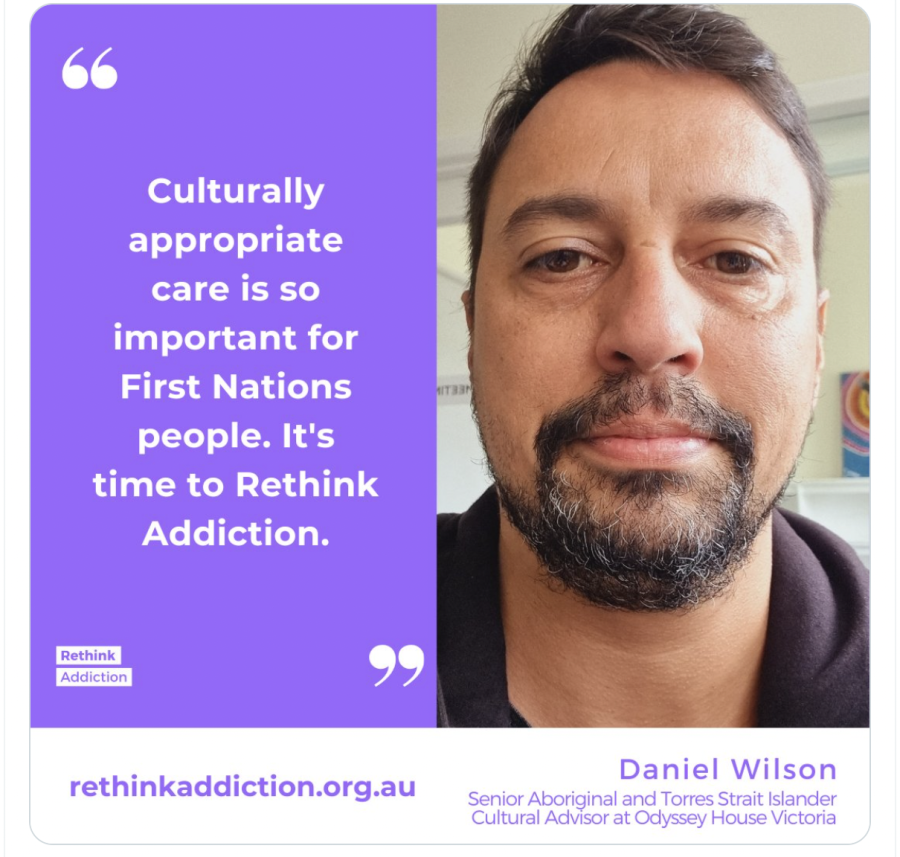 Now Wilson works on the Buladu Ngarrgu (‘building growth and knowledge’ in the Woiwurrung language of the Wurundjeri peoples), “a really important space” for Aboriginal people with addictions in Victoria.

“They’re coming in, they’ve got that sense of connection to culture, community, art, song, dance, and [we] just do whatever we can really to make people’s recovery journey as successful as possible.”

Commenting on the role of peer support, Wilson said it was very important on the ground level but he was also concerned that peers be elevated “into decision making spaces”.

Fellow panellist Peter Jack, a Ngarrindjeri man, is, like Wilson’s mother, also a member of the Stolen Generations. His pathway from drug addiction into tertiary education – as a student and academic – has led now to his outreach work as an Aboriginal Project Officer for the Sydney Local Health District (LHD).

Jack has previously discussed that his mother was a teenager when she gave birth to him in South Australia, where she “signed adoption papers and was sent back to the mission”.

He was sent home with a white family, “the only black kid for a hundred miles”, so while he grew up in a loving home, he faced racism in the local community. He was in his 40s when he met his birth mother and father and discovered he was one of 11 siblings.

Jack told the conference that his experience with addiction began with heroin when he was 18, but shifted to morphine when he later injured his back, escalating his use via a doctor who later was sacked for over-prescribing.

With easy access to high doses of morphine cut off, Jack went back to heroin: “I jumped in with both feet,” he told the conference. He lost his job, and spent his severance pay on drugs, leaving him with no money and facing three months without access to unemployment benefits.

He thought prison would be the way out, so he held up a convenience store. However, with the support of family, police and the Vinnies Men’s Crisis Centre in Adelaide’s Whitmore Square, he was granted bail, given emergency accommodation, introduced to an Aboriginal worker, and then admitted to a farm on Country run by the Aboriginal Sobriety Group who also gave him a job there.

“I said, ‘I’ll have a crack’, and the next thing you know I was an Associate Professor at Sydney University”, he said.

From there, he moved to the LHD, where his role is to “literally wander the alleyways and parks” of Redfern, Waterloo and Newtown in inner Sydney, making contact and connections with people, “to see if they’re okay or point them in the right direction to get some help or whatever (they need).”

Most of his conversations are about “everything except their drug and alcohol use”, he said, but “that’s what seems to work”.

The role of family, mentoring and culture are also central to experiences shared by Wollongong youth worker and Indigenous mentor Steve Bastian, who was recently recognized at TAFE’s Gilli Awards in New South Wales for excellence in Aboriginal education.

Described as a “proud Yorta Yorta man, father, husband, brother and son”, Bastian told the conference about growing up amid a background of traumatic violence, where substance use and family violence were part of life. So too were the impacts of disconnection from Country, community and culture.

His Nan – Dianne O’Brien (known as Aunty Di) – was also among the Stolen Generations and has written about her life in Daughter of the River Country. Only when she was an adult raising six children on her own did she discover that she was Aboriginal and that her great-grandfather was renowned Aboriginal activist William Cooper.

While many conference sessions highlighted the importance of law reform and systemic change within policing and justice, Bastian and others also highlighted the roles of individuals who gave them a break. But just as critical was having the support and love of his wife and children, and a safe place to come home to.  “I’m still alive today because of them,” he said.

Bastian said he appeared a number of times in front of the same judge, one who could see the complexity and promise in him. The judge gave him an ultimatum: to either do three years in prison – acknowledging “you’re not going to come back any better” – or go into rehab.

Bastian was able to enter treatment at Oolong House, an Aboriginal residential treatment centre in regional New South Wales: “a beautiful place because it’s all about your culture”.

He stressed the importance of support networks and of cultural safety in rehabilitation services: “… because if they’re not, it’s not going to work for you, I’ll tell you that straight out”.

Bastian, who has worked with many young Aboriginal children and teenagers in out of home care, sounded a warning about their growing number, now exceeding rates for the Stolen Generations, and the repercussions to come as the trauma plays through their lives, including in addictions.

“They always say, with the Stolen Generations, ‘get over it’.

“Tell me how you get over it,” he asked the audience. “If someone took your kids away and you never saw those kids again….would you ever get over it?”

Help with alcohol and other drugs: For 24/7 free, confidential alcohol or other drug support, contact www.counsellingonline.org.au or call the National Alcohol and Other Drug Hotline 1800 250 015 to speak to someone in your state. Click here to find out more.

If you are concerned about suicide, living with someone who is considering suicide or bereaved by suicide – the Suicide Call Back Service is available at 1300 659 467 or www.suicidecallbackservice.org.au.