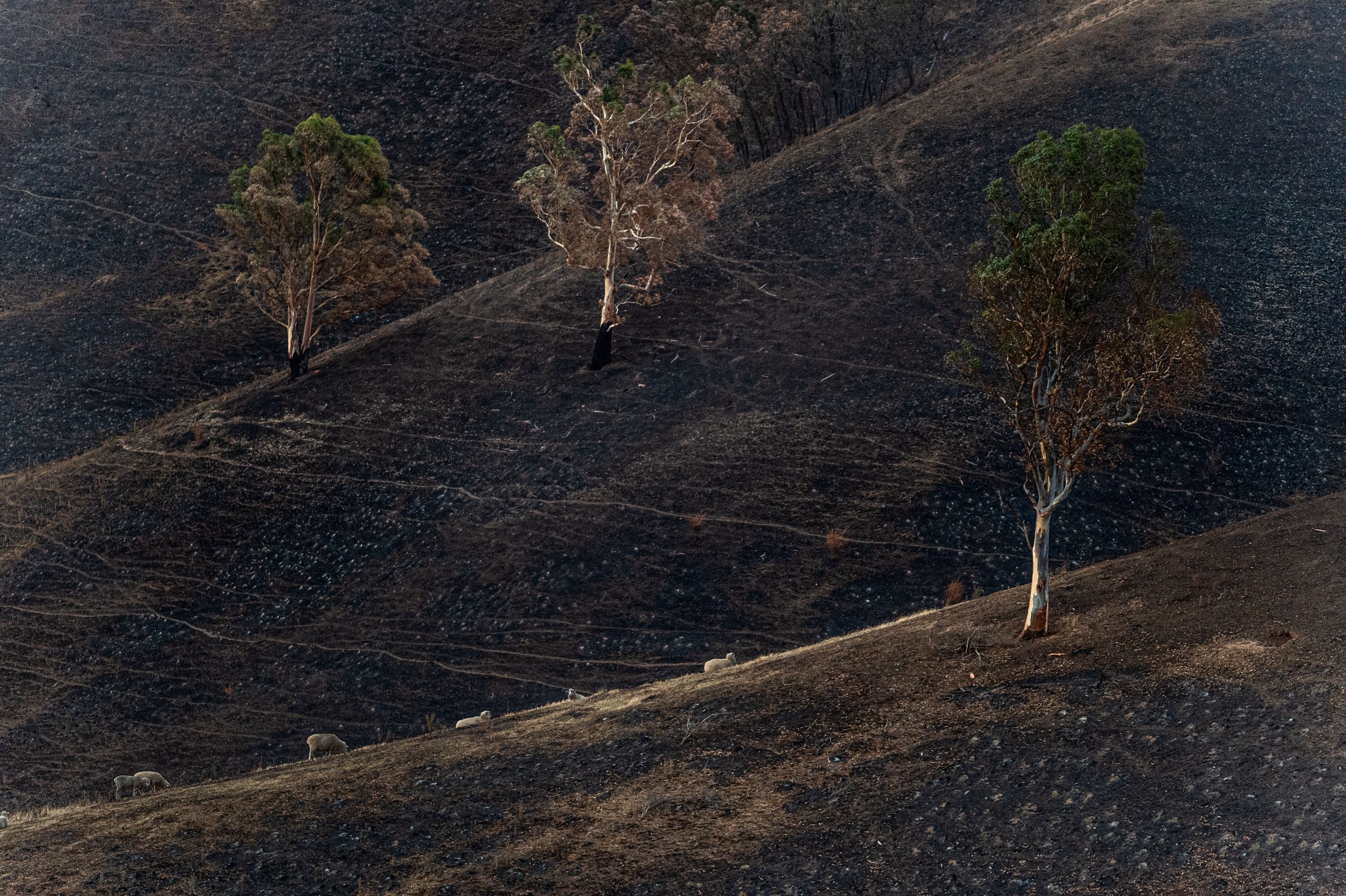 Government inaction on the climate crisis a danger for health: MJA-Lancet report

Australia faces accelerating climate-linked heat and bushfire events yet, despite growing public and media engagement with the issue and a clear opportunity to change course presented by the converging COVID-19 crisis, the Federal Government is endangering the health of the nation by failing to act.

This is the stark warning of the latest MJA-Lancet Countdown on Climate Change and Health, which presented its 2020 update on Thursday, focused on the impacts and impetus of Australia’s catastrophic and unprecedented 2019-20 bushfire crisis for health.

The report details the “intense and expansive” impact of the bushfire crisis, with about 450 deaths due to direct injury and air pollution exposure (almost ten times hazardous levels), thousands of emergency department presentations and hospital admissions, and direct insured losses alone exceeding $2.2 billion, with a total cost of around $100 billion.

“Other health effects of the fires, yet to be quantified, include acute and lingering mental health impacts of experiencing trauma of evacuation and dislocation; loss of family and friends, property, livelihoods and natural amenity; and fear about the future,” the report says.

“In addition, the potential impacts on frontline responders, especially on firefighters (the physical and mental exhaustion, the emotional trauma, the chronic exposure to smoke, and the loss of income for many volunteer firefighters) should not be underestimated.”

The report finds a robust link between the fires and climate change, noting Australia has experienced one of the world’s most marked increases in fire risk: an annual average increase of 30.6 days of high to extreme fire danger in 2016-19 compared with 2001-04. This has resulted in a 22 percent increase in annual average days of population exposure to bushfires over the same period; in NSW this figure was 102,799 person-days in 2019, far outstripping the millennium’s previous record of 71,452 set in 2002. 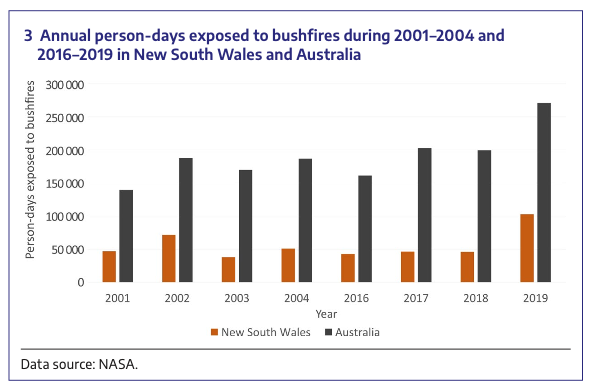 Despite clear and present need, the report notes Australia “still lacks a nationwide climate change adaptation plan for health”, in contrast to the leadership from states, territories and some shires and cities on this issue.

“Continued reluctance to acknowledge the threats posed by climate change at the federal level has hindered progress,” the report says.

It notes that Australia is the only OECD nation to have worsened the carbon intensity of its energy supply over the past three decades, to a level now 36 percent worse than the global average. Instead of following the lead of its states and territories and international counterparts such as New Zealand, the UK and the European Union, Australia’s Federal Government refuses to commit to a net zero emissions strategy, and forfeited the opportunity for a green COVID-19 recovery, the report says:

Australia would have an opportunity to promote investments in a net zero emissions future through the economic stimulus measures in response to COVID- 19; for example, through an expansion of its renewable energy systems, green buildings and sustainable transport infrastructure.

However, such opportunities have not been prioritised in policy decisions, even though well designed policies and investments could yield large and immediate health benefits through reductions in air pollution and increased physical activity, in addition to the mitigation of climate change and its impacts.”

Stonewalling by the Federal Government stood in stark contrast to growing awareness of and engagement with the links between climate change and health by the media and public, with mainstream coverage almost doubling in 2019 compared to the previous year. Scientific publications on the topic had also surged to the their highest level in a decade, despite plummeting NH&MRC grants in the space. 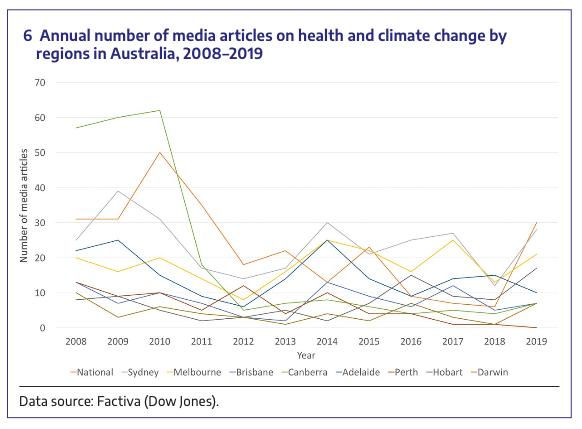 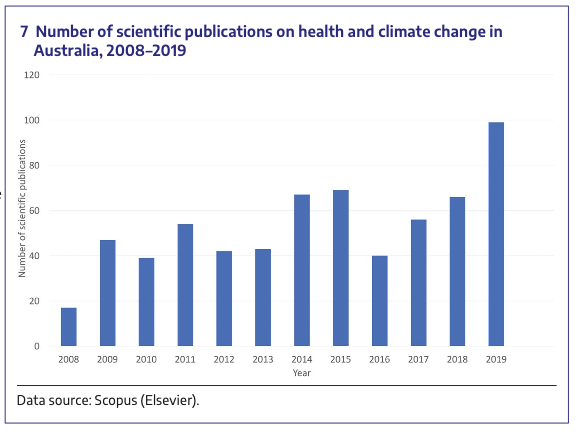 Associate Professor Ying Zhang is lead author of the Australian report, which is part of a global effort to track the impacts of climate change on health. She said the findings underscored the need for a range of policy responses, particularly at the federal level.

“Australians are already suffering the deadly health impacts of climate change, and the Australian government is exposing them to further harm by failing to address climate change,” said Zhang.

“The Federal Government is lagging behind Australian states and territories as well as the international community when it comes to addressing climate change and its health impacts.”

The Royal Australasian College of Physicians and the Australian Medical Association joined Zhang in calling on the Federal Government to act on the Countdown’s findings, starting with a national strategy for climate change and health. 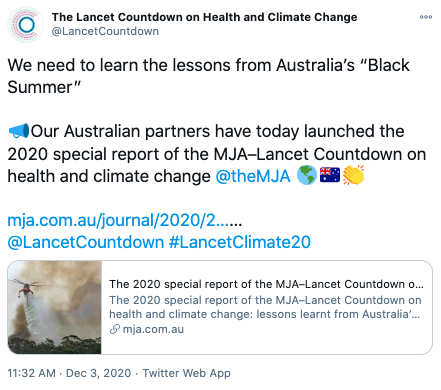 “We have already seen the immense pressure on healthcare systems from extreme weather events and this will only increase as these events become frequent and more intense, ” the RACP said.

“Without action to address climate change, the health of Australians will be increasingly at risk from extreme climate and weather events and the resulting disruption this causes to the ability of healthcare systems to provide healthcare to Australians.”

Australia’s response to the COVID-19 pandemic has shown that an ambitious, evidence-based response is vital in tackling health emergencies. The AMA urges the Australian Government to take the same approach to addressing climate change – which also presents a serious threat to our nation’s health – by implementing these policy recommendations.”

Richard Yin from Doctors for the Environment Australia describes the report’s findings as “sobering”, and a call to arms for the Australian government.

“As the recent Summer of Fires have shown, Australia is highly vulnerable to a warming climate,” said Yin.”It is time for the Australian government to act urgently on this health emergency with policies that recognise the fact that climate change, health and a resilient economy are mutually dependent.”

These sentiments were echoed by climate health scientist Rebecca Patrick, who is president of the Climate and Health Alliance:

Government action and public cooperation throughout the COVID-19 pandemic has proven that society-wide swift action to save lives and protect health in the face of a public health emergency is possible. Australia can no longer afford not to have a comprehensive national strategy for addressing climate change, health and well-being.”

The report, including the full policy brief for Australia, will be formally launched at 3pm today by RACP President John Wilson, AMA President Omar Khorshid and Tony Capon, director of the Monash Sustainability Institute.

The policy brief describes 2020 as a year, for Australia, “defined by dual health crises”: the bushfire emergency and COVID-19.

The latter had demonstrated Australia’s capacity to respond to public health challenges “when there is prompt, evidence-informed, coordinated intervention across all levels of government”, and the brief says “a similarly urgent, coordinated, evidence-based response” was required on the climate crisis.

“Recovery from the COVID-19 pandemic also presents an opportunity to reorient societies for healthier and more sustainable futures,” it says, making three overarching recommendations (see below). 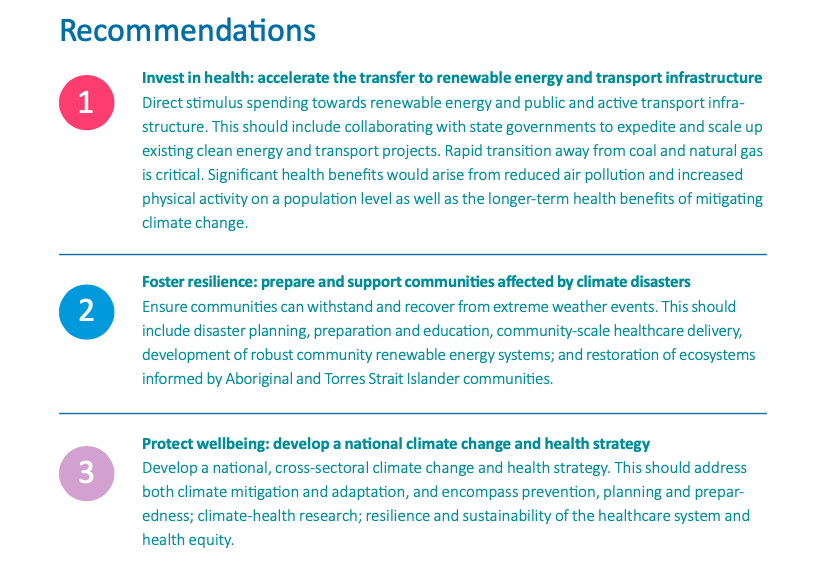 The Australian report is part of a broader body of work by the Lancet Countdown on Climate Change and Health, which also published its annual findings on Thursday.

The global report for 2020, which is titled Responding to Converging Crises, details a “warming world that is affecting human health both directly and indirectly and putting already vulnerable populations at high risk”, with the evidence providing “compelling justification for an accelerated response to climate change.”

Despite the urgency of this impetus, the Lancet Countdown finds a “concerning paucity of progress in numerous sectors, including a continued failure to reduce the carbon intensity of the global energy system, an increase in the use of coal-fired power, and a rise in agricultural emissions and premature deaths from excess red meat consumption.”

“In many cases, 2020 will probably be an inflection point for several of the indicators presented during the coming decade, with the direction of future trends yet to be seen,” it says.

“Ensuring that the recovery from the pandemic is synergistic with the long-term public health imperative of responding to climate change will be crucial in the coming months, years, and decades.”

The Lancet Countdown on Health and Climate Change: 2020 report

The report says public and political engagement will be essential to curbing fossil fuel consumption and limiting global temperature rise to less than 1.5 degrees.

While media coverage, online searches, and scientific journal output on climate change and health had all increased markedly, and there was “evidence of dynamic and reinforcing relationships between these domains”, the report notes “persisting inequalities in wealth and political influence”, with the debate being driven “by countries and regions that are affected most by the changing climate to which they have contributed the least”.

“At the same time, the science of health and climate change continues to be led by high-income, high-emitting countries, which are mainly responsible for climate change,” it adds. 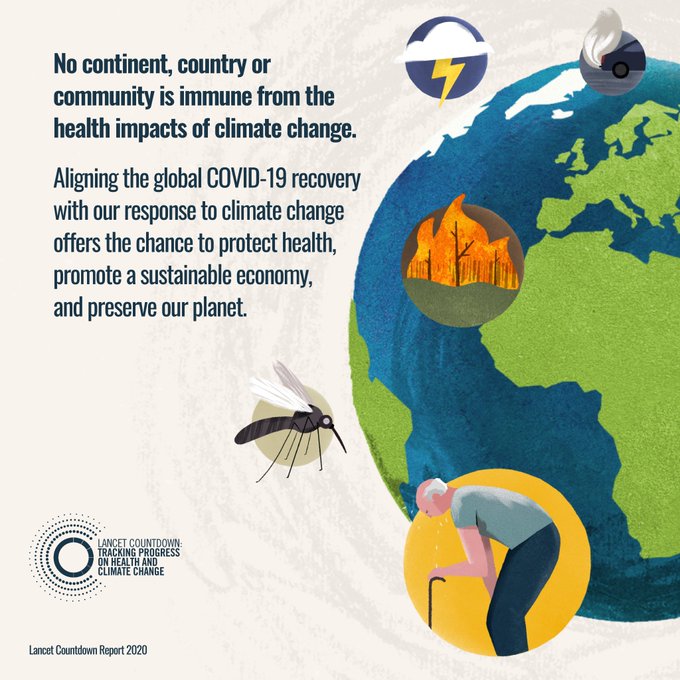 The Countdown notes that the climate debate continues to be framed in ways that “pay little attention to its health dimensions”, with just one-sixth of newspaper coverage adopting this lens and less than one-tenth of scientific articles.

Both the global and Australian reports emphasise that health care professionals and systems will be instrumental driving the debate and push for action.

“As Australia recovers from the compounded effects of the bushfires and begins to emerge from the COVID-19 pandemic, the health professions have a pivotal role to play,” the Australian report says.

“They are uniquely suited to integrate the response to these short term threats, with the longer term public health implications of climate change, and to advocating that the economic recovery from COVID-19 aligns and strengthens Australia’s commitments under the Paris Agreement.”

The public health and financial effects of COVID-19 will be felt for years to come, and efforts to protect and rebuild local communities and national economies will need to be robust and sustained.

Despite concerning indicators across each section of this report, the 2021 UN Climate Change Conference presents an opportunity for course correction and revitalised NDCs.

The window of opportunity is narrow, and, if the response to COVID-19 is not fully and directly aligned with national climate change strategies, the world will be unable to meet its commitments under the Paris Agreement, damaging health and health systems today, and in the future.”