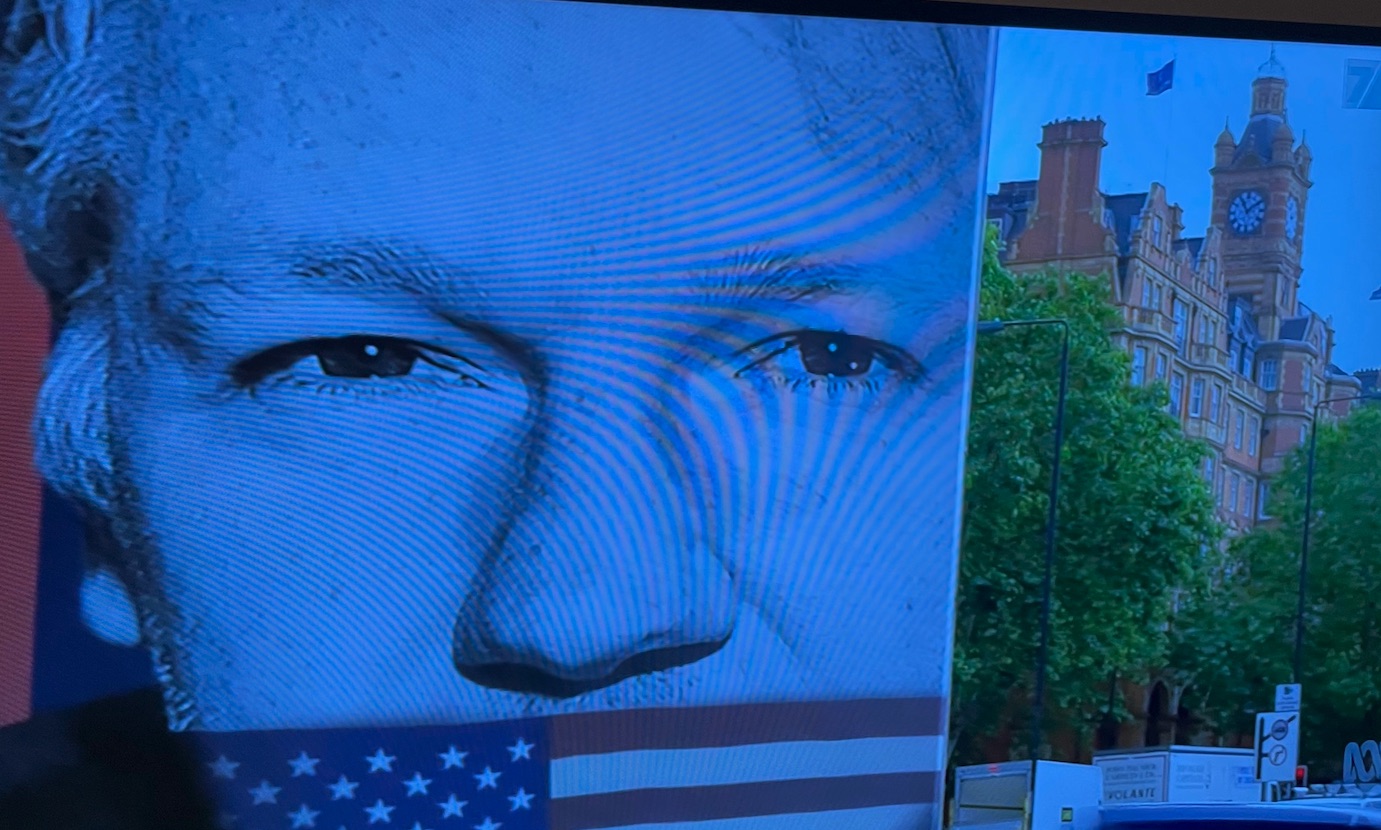 Introduction by Croakey: As journalism and human rights defenders urge the Albanese Government to step up efforts to bring Julian Assange home to Australia, health leaders and organisations are also being encouraged to add their weight to the advocacy campaign.

The call comes from the Medical Association for Prevention of War (Australia), which wrote to Prime Minister Anthony Albanese on 13 June, urging him to intervene to stop Assange’s extradition to the United States.

Dr Sue Wareham, President of MAPW, also joined more than 300 other doctors and mental health professionals from around the world in an open letter to the UK Home Secretary Priti Patel on 10 June, warning against making “yourself, your government, and your country complicit in the slow-motion execution of this award-winning journalist, arguably the foremost publisher of our time”.

After Patel approved the US extradition request on 17 June, many journalism organisations and prominent figures, including former NSW Labor Premier Bob Carr, have called on the Australian Government to boost advocacy on behalf of Assange (see examples in tweets at the bottom of the post).

The Government has continued, however, to strive for a low public profile on the issue, saying it would not engage in “megaphone diplomacy”, despite intense pressure also coming from key crossbench MPs.

Dr Sue Wareham, President of MAPW, writes below that peak health organisations are strongly encouraged to join calls for the planned extradition to be dropped. Some other health leaders, including Professor Fran Baum, are also advocating for both Assange and the importance of media freedom. 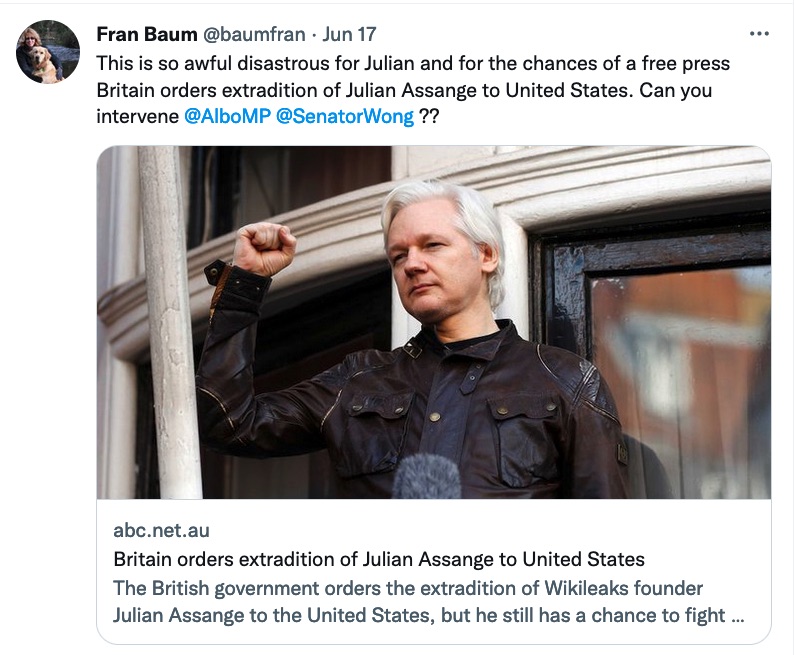 On 17 June, the UK Home Secretary Priti Patel approved a request from the US that Australian journalist Julian Assange be extradited to the US. While the decision will be appealed, it represents a dangerous escalation of the risks Assange faces, and an escalation of this attack on a free press and our democracy.

Assange has been detained in London’s Belmarsh high security prison for over three years, much of it in prolonged solitary confinement. He has been convicted of nothing, is non-violent, and is held because a UK ally, the US, seeks his extradition to face political charges.

Among the multiple disclosures made by Assange in his Wikileaks publications were evidence – which has not been disputed – of war crimes committed by the US in Iraq. He is being persecuted for publishing information that we have a right to know.

Serious physical and mental health concerns that threaten Assange’s life have been raised by many people, including the group Doctors for Assange, which now represents over 300 doctors around the world. In Australia, the Medical Association for Prevention of War (MAPW) is among those groups that have spoken out also.

In November 2019 Doctors for Assange wrote to the UK Home Secretary Priti Patel expressing concern at the continued deterioration of Assange’s health, both during his seven years from 2012 in the Ecuadorian Embassy and since his arrest and detention in early 2019.

It referred to the alarming report of UN Special Rapporteur on Torture Nils Melzer (with similar concerns raised by others) that Assange showed “all the symptoms typical for prolonged exposure to psychological torture”.

Melzer had stated “Despite the medical urgency of my appeal, and the seriousness of the alleged violations, the UK has not undertaken any measures of investigation, prevention and redress required under international law.” Patel did not reply to the doctors’ letter.

In February 2020, the group reported their concerns in The Lancet, citing also a history of denial of access to health care and repeating the report of prolonged psychological torture. During the extradition proceedings in the UK, medical evidence was presented, and accepted, that indicated likely substantial suicide risk if Assange were extradited.

To add to his deteriorating health situation, in October 2021 Assange suffered a mini-stroke, augmenting the risks he faces with prolonged psychological stress.

Doctors for Assange wrote to the UK Home Secretary again on 10 June this year, stating clearly that his deteriorating health must be considered in her decision regarding extradition:

This dramatic deterioration of Mr Assange’s health has not yet been considered in his extradition proceedings. The US assurances accepted by the High Court, therefore, which would form the basis of any extradition approval, are founded upon outdated medical information, rendering them obsolete.

Under conditions in which the UK legal system has failed to take Mr Assange’s current health status into account, no valid decision to approve his extradition may be made, by you or anyone else.”

Clearly a serious risk of suicide or other fatal outcomes did not feature strongly in the Home Secretary’s recent decision to allow extradition.

Beyond the health concerns, the implications of the persecution of Assange for our democracy and the free press that it needs are chilling.

It is difficult to escape the conclusion that Assange is being used as an example to others, to intimidate into silence other journalists with powerful evidence of crimes committed in our name. This opens up a frightening world of illegality and unaccountability at the highest levels.

[The] Assange case is the story of a man who has been persecuted and abused for revealing the dirty secrets of the powerful, including war crimes, torture and corruption.

It is a story of deliberate judicial arbitrariness in Western democracies that are otherwise keen to present themselves as exemplary in the area of human rights.”

On 13 June, MAPW wrote to Prime Minister Albanese, urging his intervention on behalf of this Australian citizen, and stating that on medical grounds Julian Assange must not be extradited. The MAPW letter welcomed views previously expressed by Albanese in December 2021 that “enough is enough” in this ongoing saga.

Now in government, much more decisive action by Albanese and other senior ministers is needed. Assange is an Australian citizen, a political prisoner who is in desperate need of protection. 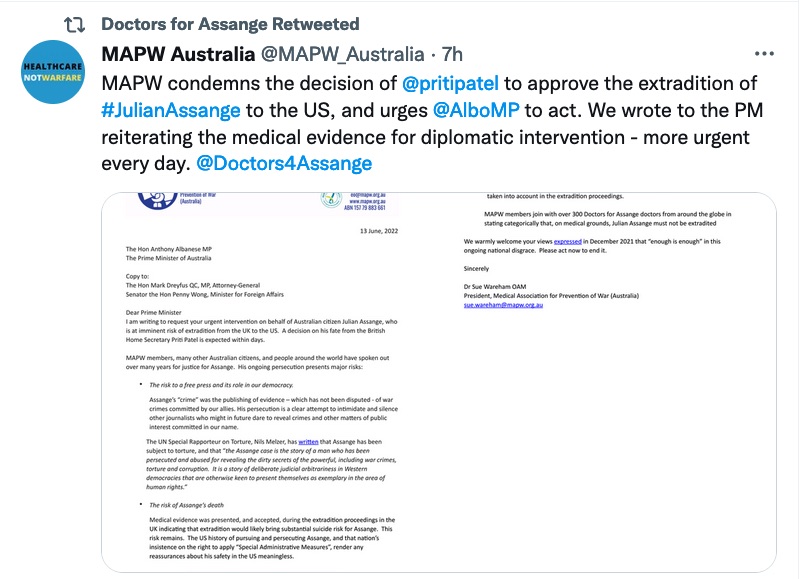 While Government ministers have said that they do not intend to engage in “megaphone diplomacy”, the implication is that yet again the public does not have a right to know what is said and done in our name on such matters of public importance.

The messages that the US and the UK need to hear from Australia, loudly and publicly, are simple. Assange’s life is at risk. Extradition for political charges is unacceptable. He must not be extradited. He must be brought home.

A phone call from Prime Minister Albanese to President Biden, using the “special relationship” we are told exists between our two countries, could bring an end to this terrible saga.

Calls for strong action from other parliamentarians (see for example here and here) add valuable momentum to the campaign for justice for Assange.

Health professionals also have an important role to play in advocating on this issue.

Calls from peak health organisations for Assange’s extradition – with the risk to his life that this would carry – to be abandoned are strongly encouraged.  Doctors for Assange also welcomes new voices.

What is at stake is not only the life of a man being persecuted, but the freedom of people everywhere to safely report critical information that is in the public interest. 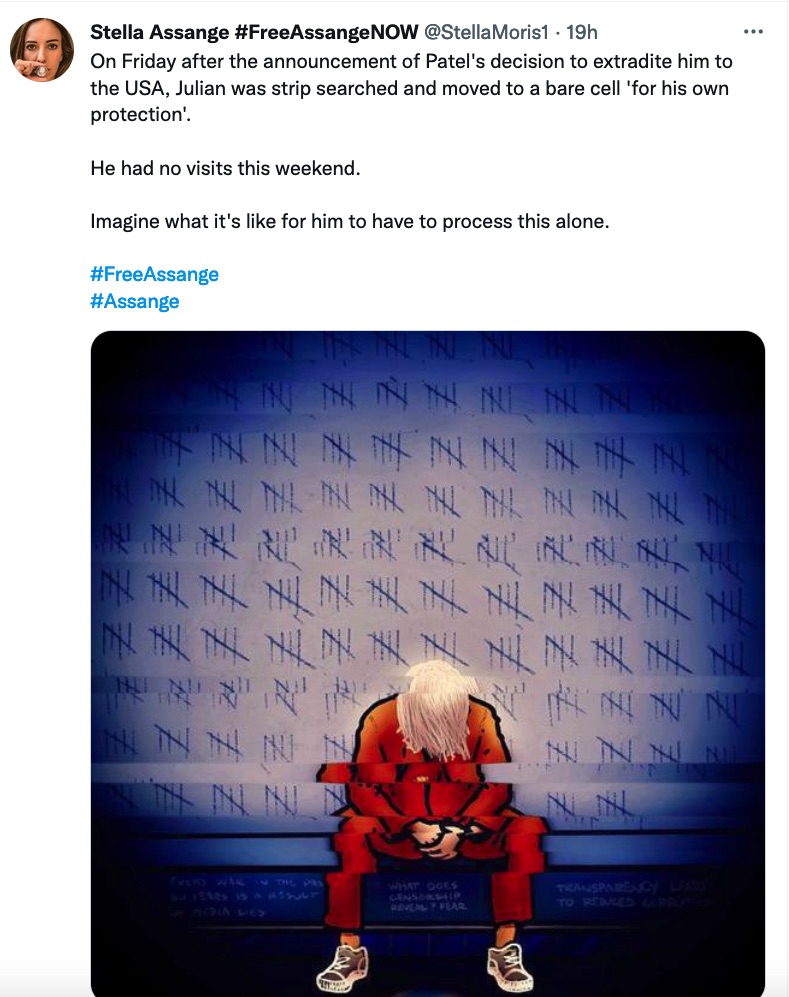 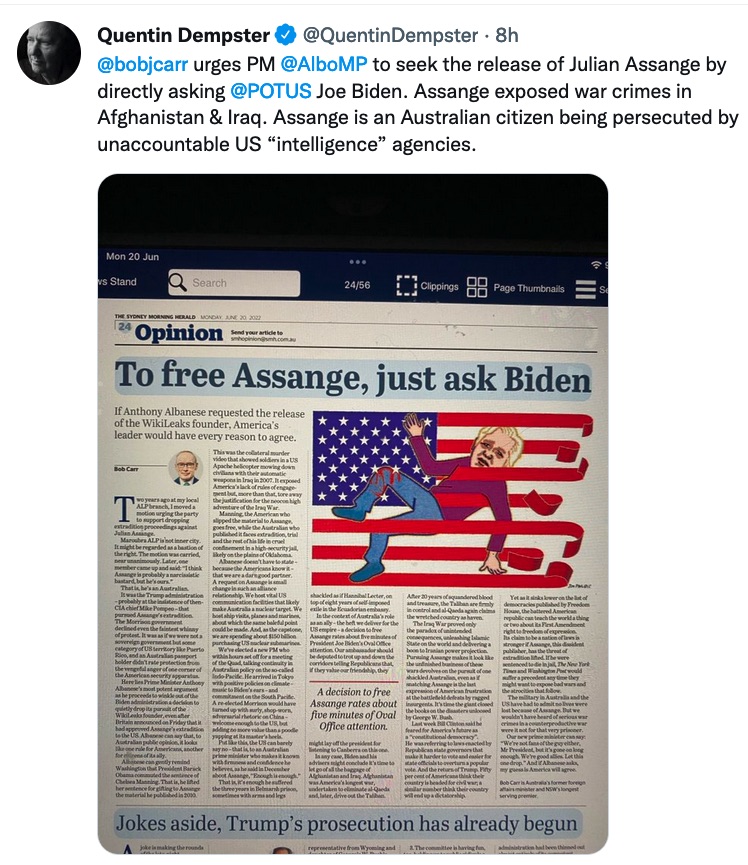 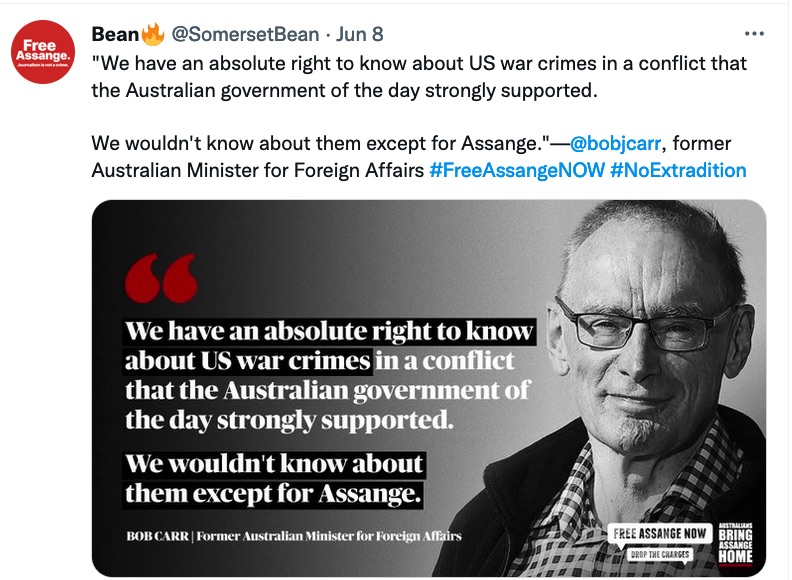 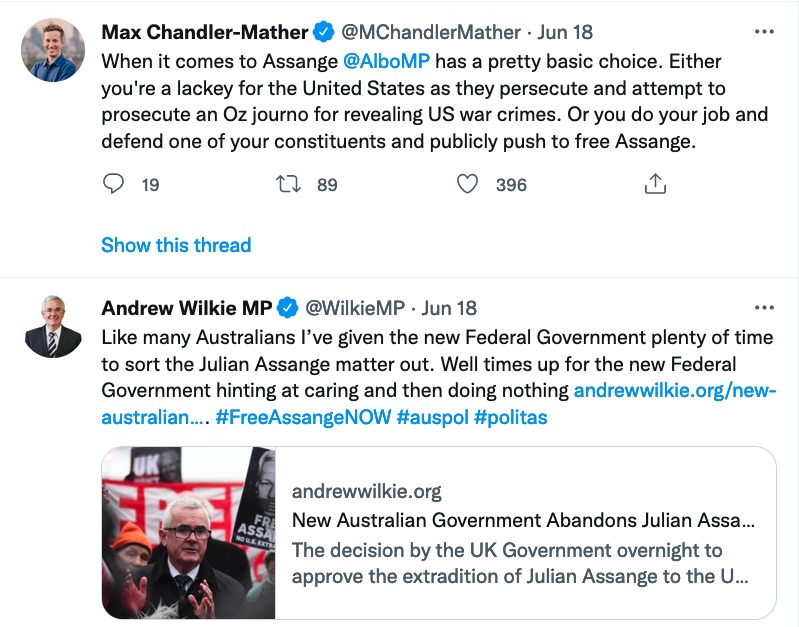 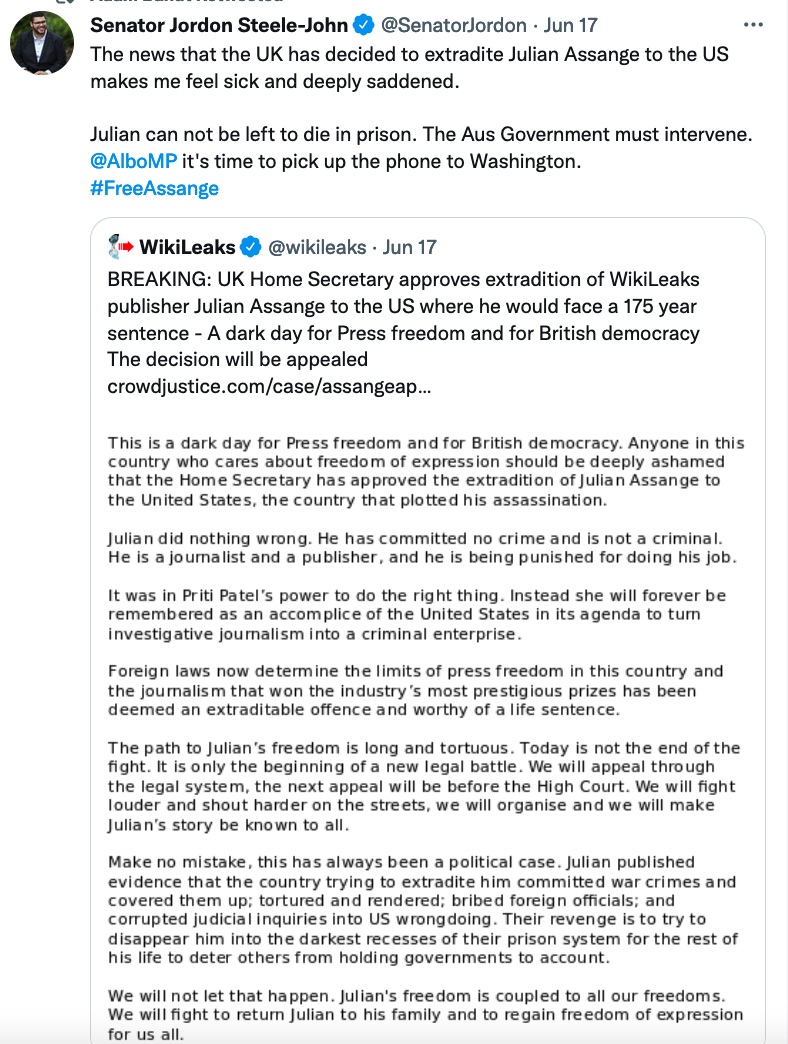 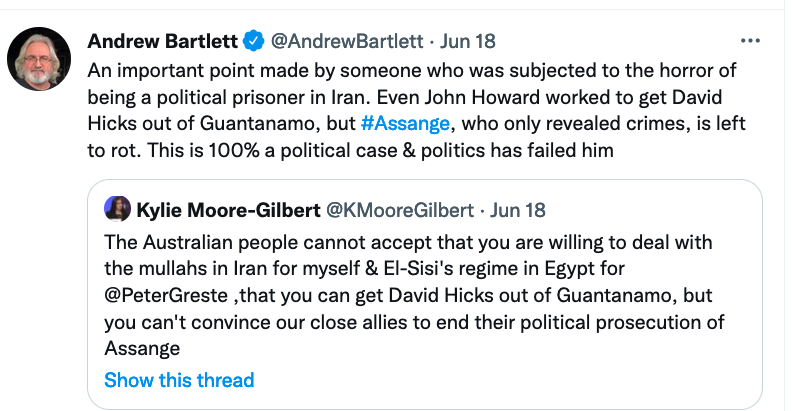 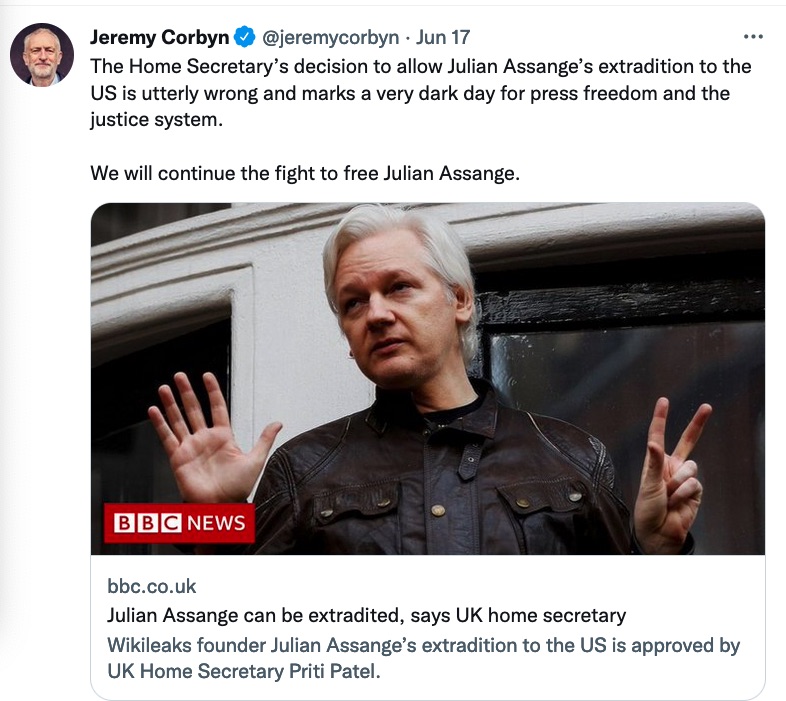 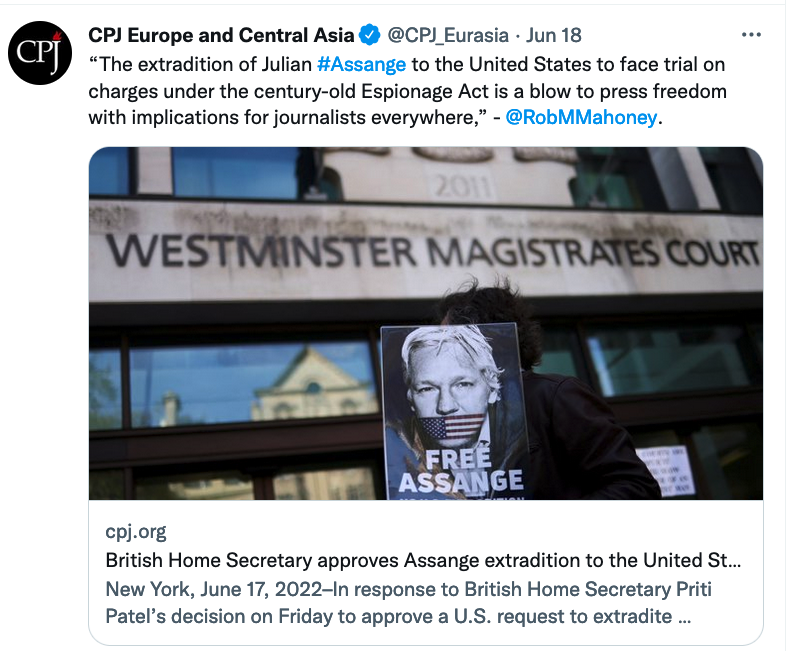 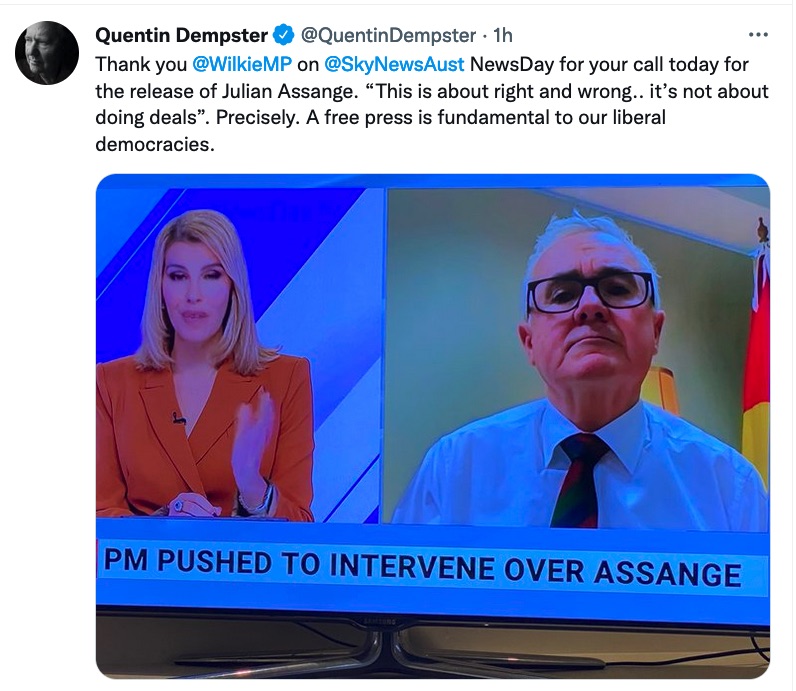 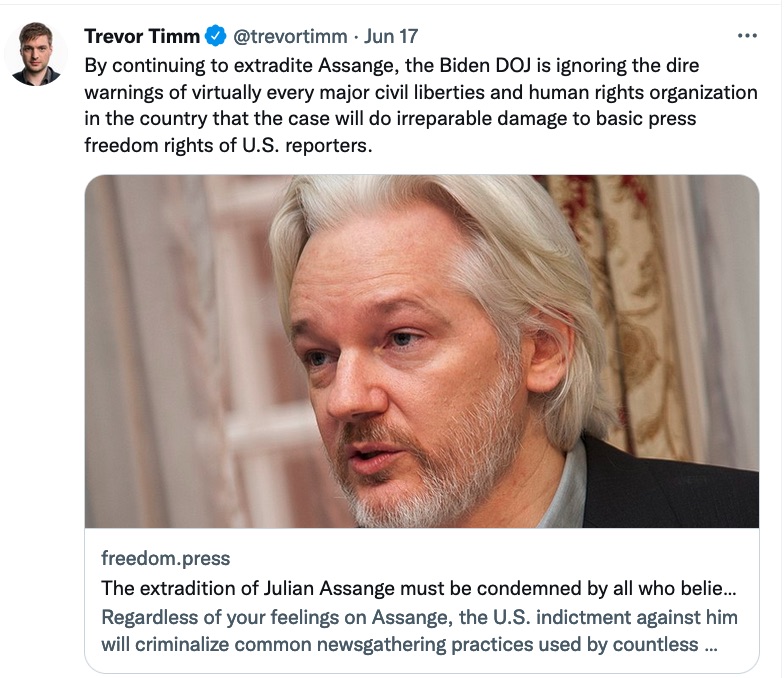 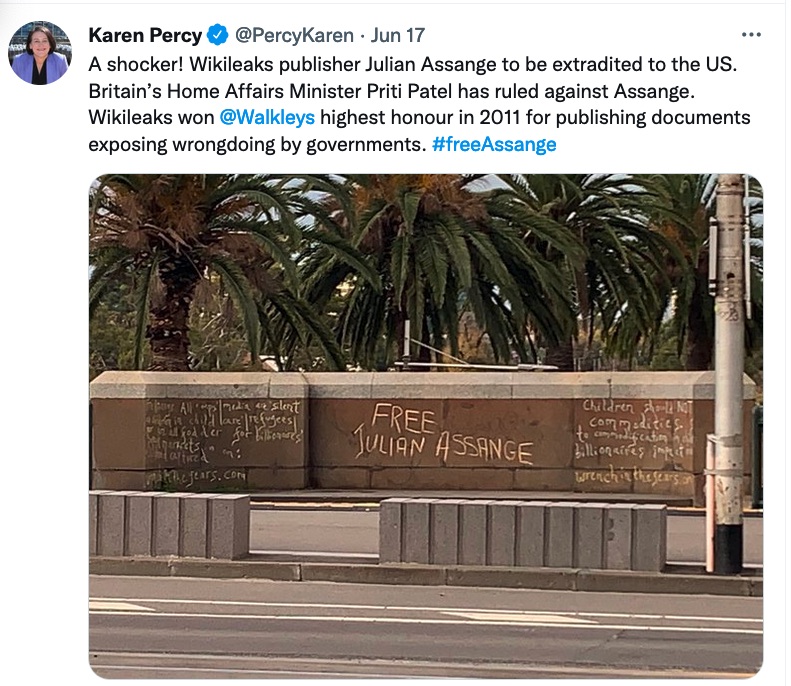 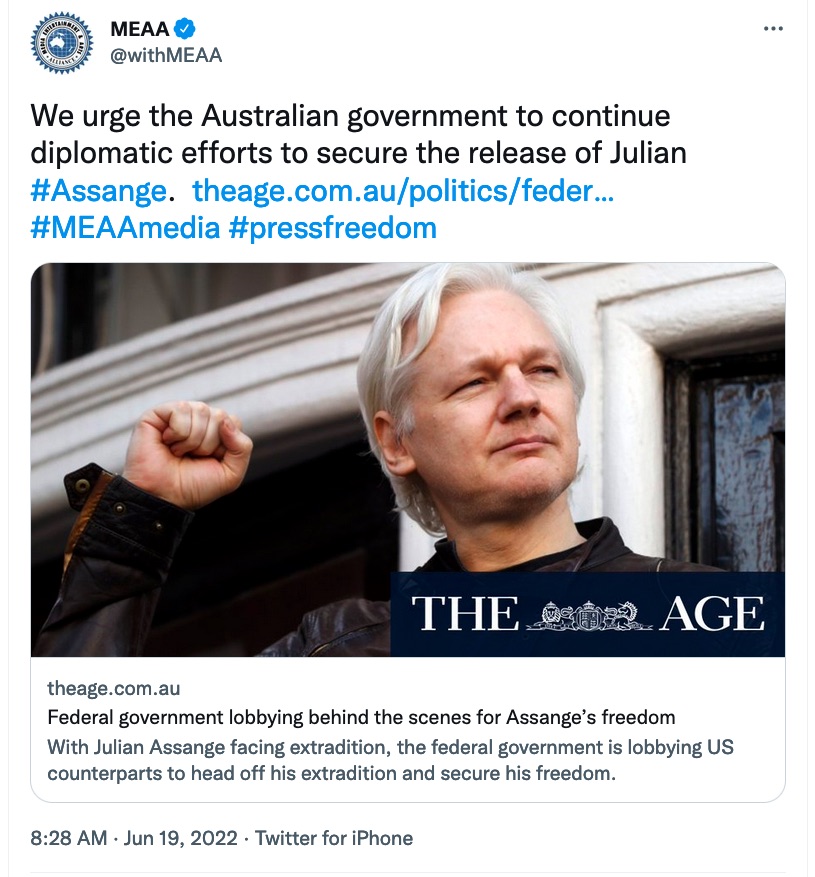 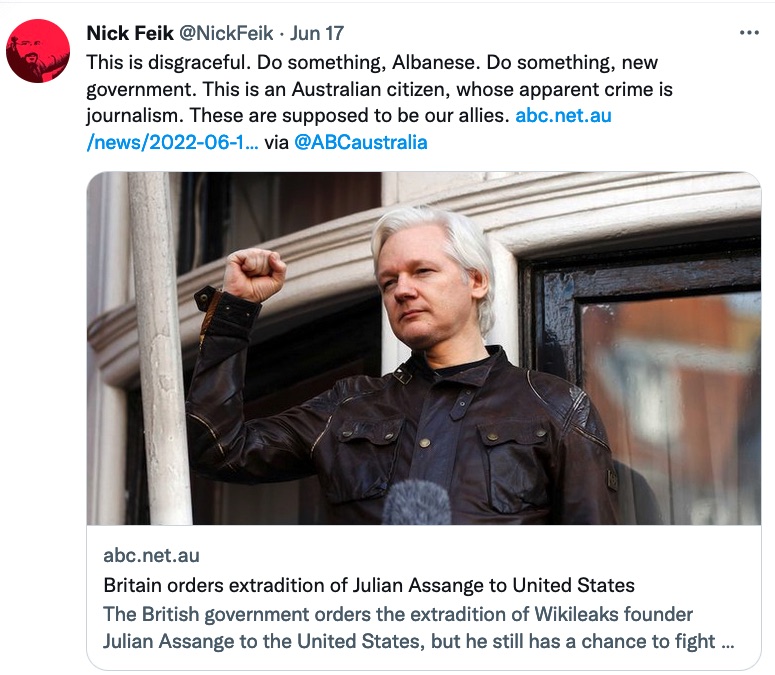 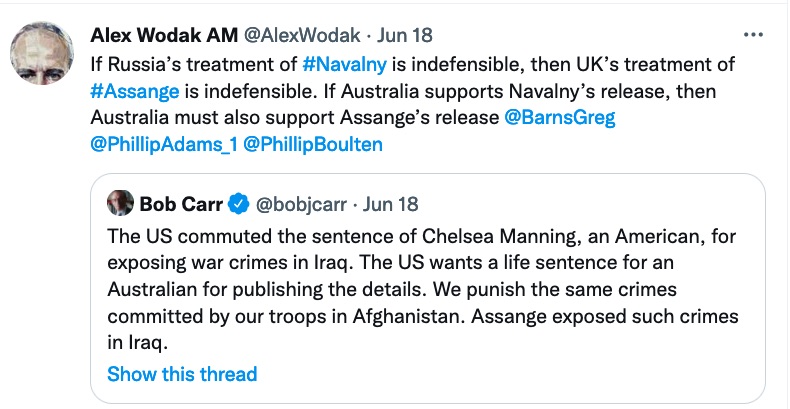 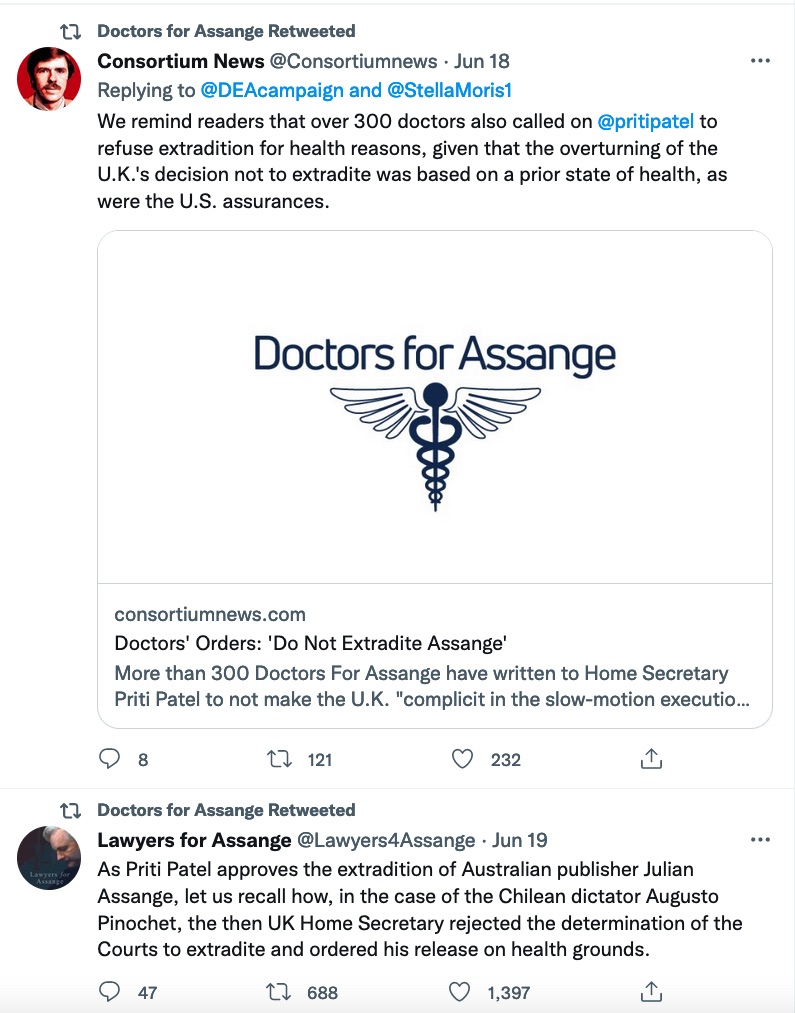 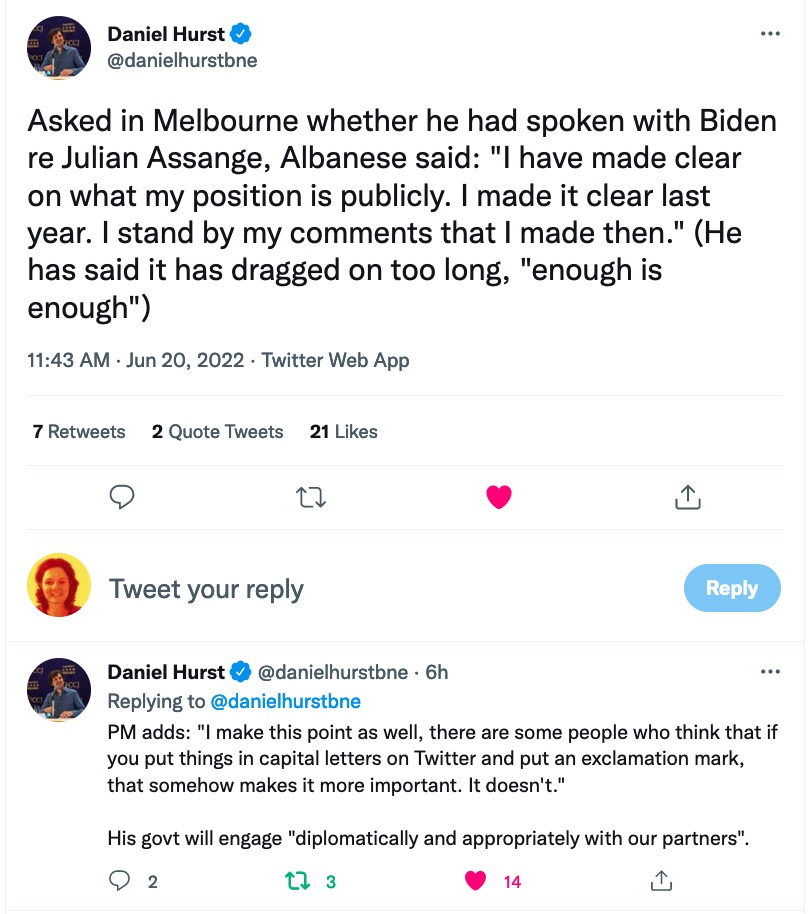 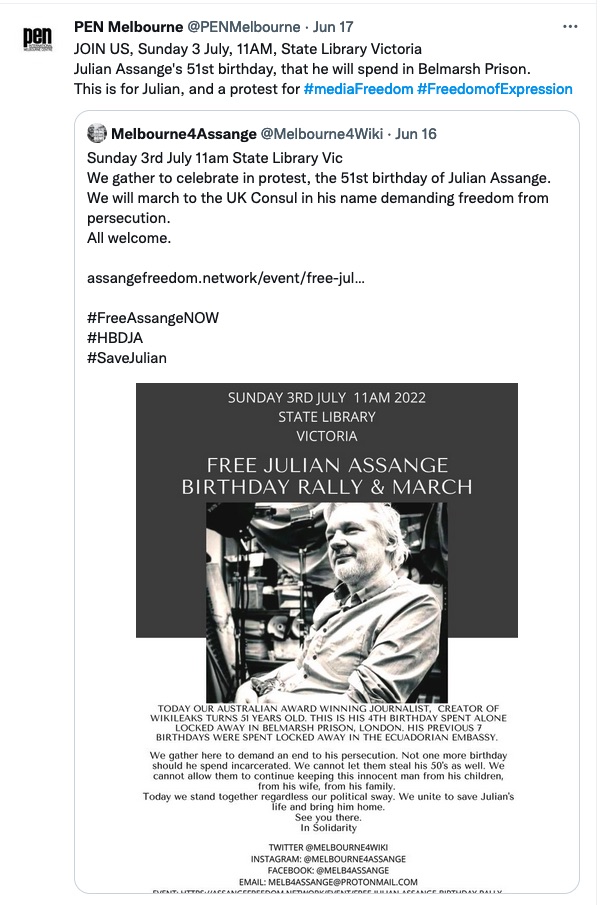 See previous articles at Croakey on Julian Assange, dating back to 2010