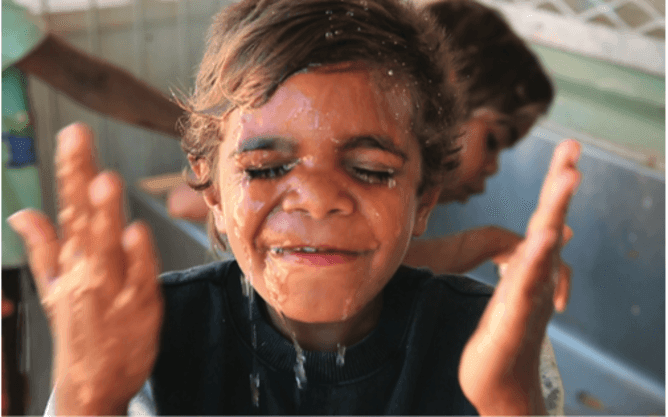 Here’s what we need to do to close the gap in Indigenous children’s eye, ear and heart health

Mainstream Australia eliminated the eye disease caused by chlamydia more than 100 years ago; yet Indigenous Australians can have up to 40 trachoma infections in their childhood.

Rheumatic heart disease is a distant memory for city paediatricians, but it is rampant in remote communities and responsible for the largest gap in life expectancy between Indigenous and non-Indigenous people.

And while the World Health Organisation considers a prevalence of 4% in the population of runny ears or middle-ear infection a public health problem, most Aboriginal children (90%) in remote communities have some form of these conditions.

This week, The Conversation ran a three-part package on the blinding, deafening and sometimes deadly conditions in Indigenous Australian children that have little to no impact on their non-Indigenous counterparts.

Part 1. Why is trachoma blinding Aboriginal children when mainstream Australia eliminated it 100 years ago?

“Trachoma is caused by the bacterium Chlamydia trachomatis, which creates swelling under the inner eyelid leading to scarring. The scars cause the eyelashes to turn inward and scratch the eye, which is intensely painful and made worse by blinking.

“Eventually, if left untreated, all the scratching from the lashes will result in the cornea – the transparent layer at the front of the eye – going cloudy and the person having irreversible blindness.”

As Professor Taylor and colleagues explain in the graphic below, getting rid of trachoma in Indigenous communities requires maintenance of good levels of hygiene and involvement from each level of government: 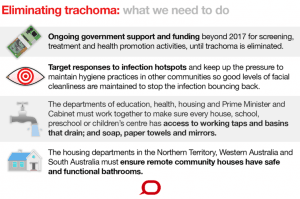 “It seems far-fetched to think a sore throat or skin sore could take a lasting toll on your health, leading to heart failure and premature death. But this is the reality for many Indigenous children and young people in Australia’s most vulnerable communities.

“For these young people, what we might consider a relatively harmless infection with streptococcus bacteria, in the throat or on the skin, can be the start of a tragic pathway towards life-threatening rheumatic heart disease (RHD).”

These are the critical elements of the Endgame Strategy, currently under development by the END RHD Centre of Research Excellence: 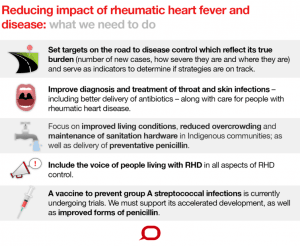 Professor Leach explains that the departments of education, health and housing, as well as local councils, must work together to reduce the rates of middle ear infections and hearing loss in Indigenous children: 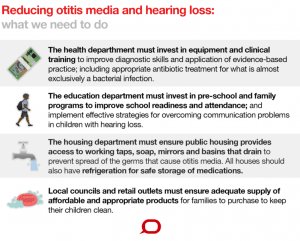 Sasha Petrova is Researcher, Health + Medicine at The Conversation