How do we build a health system that is not racist? (Start by taking this online test…)

Journalist Marie McInerney is covering the event for the Croakey Conference Reporting Service (you can read her preview, an interview with Professor Kerry Arabena here.)

The article below investigates what is likely to be a key theme of the event – how health services and professionals can help tackle racism.

How do we build a health system that is not racist?

That’s one of the challenges being discussed today and tomorrow at the Closing the Credibility Gap conference on implementing the National Aboriginal and Torres Strait Islander Health Plan which articulates, for the first time, a health system free of racism and inequality.

A good start at an individual level, says Associate Professor Yin Paradies – for any profession working with Aboriginal and Torres Strait islander people – is to test our own stereotypes and preconceptions by taking the Implicit Association Test developed by United States researchers.

It has famously found people are more likely to associate black people with words like ‘bad’ and ‘failure’ and white people with ‘happy’ and ‘joy’. Interestingly it comes with a warning:

“If you are unprepared to encounter interpretations that you might find objectionable, please do not proceed further. You may prefer to examine general information about the IAT before deciding whether or not to proceed.”

The IAT has its share of critics, but it’s been clicked on more than five million times and is an excellent teaching tool to show people if they have an implicit racial bias or not, says Paradies, who is a Principal Research Fellow at the Centre for Citizenship and Globalisation at Deakin university.

“One of the biggest ways to address a bias is to be aware of it,” he says. “The next biggest is having the motivation to stop it from happening, and the third is to really combat those associations in your mind that are driving it by finding counter-stereotypical and positive examples.”

“There’s a lot of evidence of the success of just being mindful,” he says. But that’s the risk in the medical context, where doctors and health care workers are often rushed and stressed and don’t have the mental space to make a considered decision. “So they fall back on prevailing and persistent stereotypes of Aboriginal people as lazy or ignorant.”

The implications of such bias at both an individual and institutional level in health care will be the subject of Paradies’ ‘virtual’ presentation on Friday to the symposium on: ‘A culturally respectful and non-discriminatory health system’. He is also presenting in Adelaide at a symposium on health services, racism and Indigenous health.

The issue also arose at a Health Workforce Australia conference yesterday in Adelaide. HWA has funded Curtin University to develop the Aboriginal and Torres Strait Islander Health Curriculum Framework project which, among other things, will consider issues of cultural competence for health professionals.

Having begun his career as a cadet at the Australian Bureau of Statistics, Paradies’ work has explored the health, social and economic effects of racism, as well as anti-racism theory, policy and practice.

He has just won a $830,000 Future Fellowship grant from the Australian Research Council to look at understanding and addressing racism in Australia. With both Aboriginal and Asian heritage, he acknowledges his own understanding is not just theoretical.

While there has been growing awareness of racism as a determinant of health, he says most focus has remained directly on disadvantage without considering the various factors that produce and reproduce disadvantage. Having the role of racism in health and the health system front and centre in the National Health Plan is, he says, a big move forward.

“I think people are not really willing yet to turn their gaze back to the mainstream, to institutions and organisations, and the general populace and their attitudes and how they might be a driver of disadvantage,” he said.

“People are more comfortable with the ideas of past transgressions, the Apology for the Stolen Generations being a prime example. It’s easier to focus on the people who are disadvantaged, who are ‘victims’, and we’ve seen that with things like the Northern Territory Emergency Intervention.”

The impact of racism on the health of Aboriginal and Torres Strait Islander people can be seen in:

The second layer comes through health care provider racism. As Symposium organiser Professor Kerry Arabena pointed out in a preview of today’s event, one in three Aboriginal Victorians surveyed by VicHealth reported experiencing racism in a health care setting.

Such experiences, Paradies says, can lead to:

Unconscious healthcare provider bias has more complex implications, including being found in the United States to lead to poorer clinical decisions for African Americans.

Australian studies have shown disparities in medical care experienced by Indigenous patients, including that they are a third less likely to receive appropriate medical care across all conditions, as well as for lung cancer and coronary procedures. Another study showed Indigenous patients were only one-third as likely to receive kidney transplants.

“In the US studies, doctors recommend different courses of action in hypothetical cases of patients who are the same in essence, except that one is black and one white,” Paradies says. “A lot of the time in Australia this is driven by implicit, very unconscious kinds of views about Aboriginal people and their capacity to benefit from certain treatments, or whether they in fact have conditions that require further investigation.”

It’s an issue seen often in other service areas, not least in racial profiling by police, which led recently in Victoria to a breakthrough when police settled a Federal Court racial harassment case brought by a group of African Australians. Paradies, who acted as an expert witness in the proceedings, notes that, despite this landmark case, police still denied evidence of a racist culture.

Yet he sees scope for optimism and points to organisations like Hunter New England Health as showing the way.

HNE Health has the largest Aboriginal population of any New South Wales local health district and has committed to a long-term approach “to address individual and institutional racism”, noting its impact on Aboriginal health and its own capacity to recruit and retain Aboriginal staff.

An article in the NSW Public Health Bulletin points to three specific strategies: leadership, consultation and partnership with local Aboriginal groups, and staff training, which it says is “deliberately challenging and confronting”.  (See the overview of its approach in the diagram below – click on image to see in more detail).

While health is a very busy space with many competing priorities, Paradies says its high regulation “in some ways makes it easier to bring in new ideas and change.” 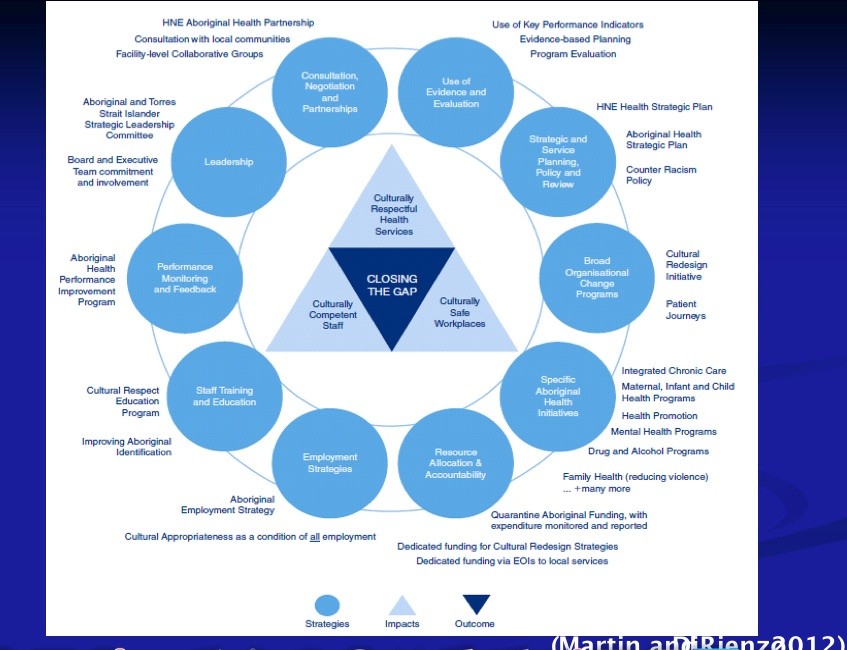