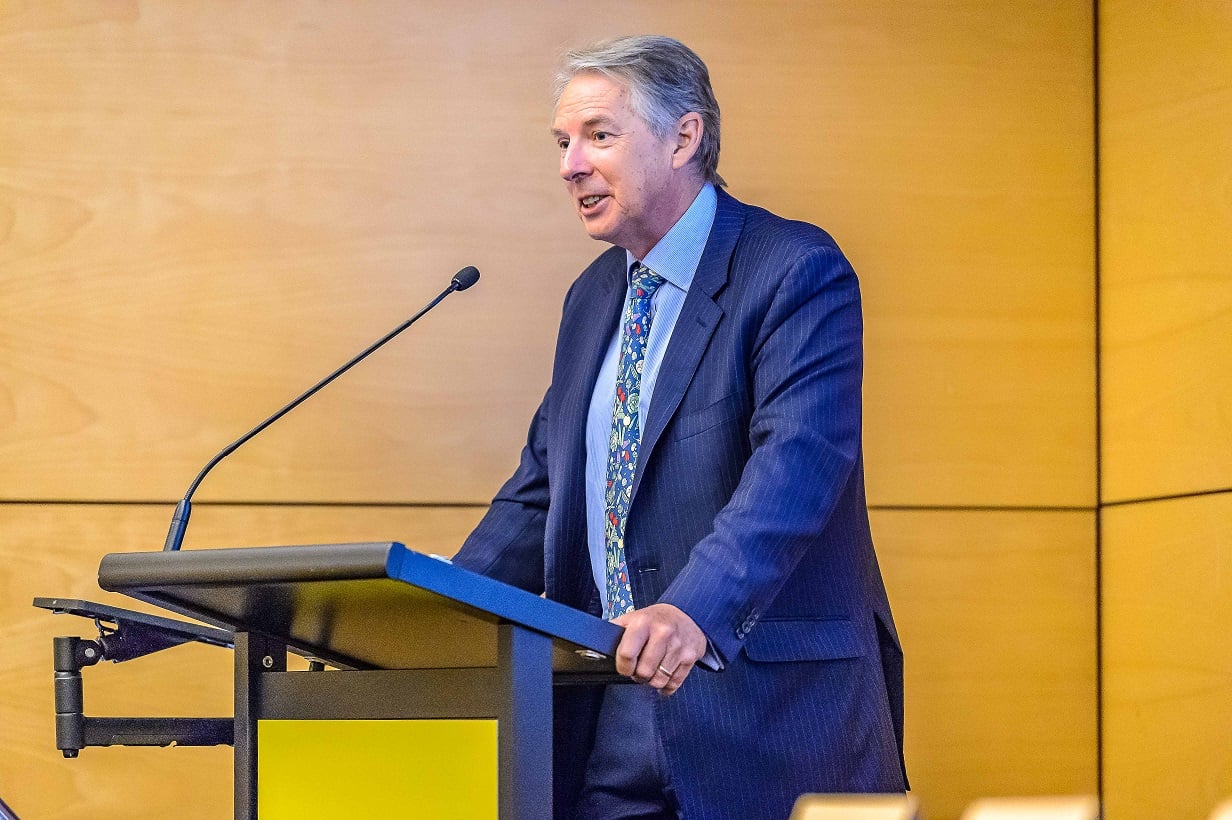 At the recent annual forum of the Centre for Primary Health Care and Equity (CPHCE) at the University of NSW, public health leader Professor Don Nutbeam shared some personal stories from his early years to make broader points about the complexity of forces shaping health.

His personal history highlights the importance of the social determinants of health and individual health literacy and choices, of role models such as teachers, and of the “utterly transformative” power of education.

Dr Ruth Armstrong reports below in the first of two articles on the forum discussions for the Croakey Conference News Service.

“We are so fundamentally shaped by the social and economic circumstances
that we grow up in.”

This statement, from Professor Don Nutbeam’s address to the recent annual forum of the UNSW Centre for Primary Health Care Equity (CPHCE), is core to understanding the social determinants of health, but it also holds true for the way we live our lives – what underpins our thinking, drives our passions and motivates our choices.

We bring ourselves to everything we do.

Nutbeam, who is currently a Professor of Public Health at the University of Sydney, was at the forum to deliver the annual Ian Webster Health for All Oration. He has had a stellar career in public health – forty years in health education and health equity including senior university and public sector roles in the UK and Australia – but he confessed to finding the topic chosen for his oration unusually challenging.

Being asked to speak on Health education, health promotion, and health literacy – a personal journey, set Nutbeam on (for him) the unusual path of looking backwards, which he usually avoids “so he can’t see who’s chasing,” and of reflecting publicly on his personal life, which he finds uncomfortable.

But the personal touch added an important dimension: Nutbeam’s early life, which he was quick to deem unremarkable, set him up well for some deep and intuitive understandings about what influences health, and what needs to change to improve it.

The youngest of five children, and the son of a Portsmouth dock worker, Nutbeam was born after the second world war, into a family who had been displaced and moved to temporary accommodation in another town, after their home was destroyed in a bomb raid.

His early years were spent in tenement housing on a public estate with outdoor plumbing, no heating and no hot water. He remembers being hungry at times, and cold, but secure and cared for, with no real sense of deprivation.

Nonetheless his “normal environment” was not what we would not consider healthy. Every adult he knew smoked, there was high unemployment and many people were chronically unwell. His own father had to stop work due to chronic lung disease when Nutbeam was about four, and died of the disease when he was fourteen. His mother worked several jobs to support the family.

As the first child from the housing estate to be offered a place at the local selective grammar school, Nutbeam entered an “entirely different world.”

He did well at school but still had no expectation of obtaining a university education, until his ex-headmaster plucked him from a job as a bank clerk, and helped him apply for teacher training college at Southampton, where he subsequently also obtained his higher degrees in health education and epidemiology.

These life experiences, Nutbeam believes, formed the basis for some understandings that have underpinned all his work. He told the forum:

Intuitively I have always understood that social, economic and environmental conditions shape our lives and our life chances. But I also didn’t need any persuading that there’s something about individual behaviours, personal choice that really matters.

I understood the connection between the way people live their lives and the social and economic circumstances in which they live. Role models (such as teachers) are really important, and education is utterly transformative.

If we want to change things, one of the most important things we can do is engage with people, whether it be through formal education or health education. The most transformative changes in peoples lives and health, in my experience, have come because people have engaged with their health on the basis of better understanding about it.”

This theme – the need to work both on the social determinants of health and improve health literacy of people, systems and communities wherever they are – recurred throughout the day-long forum.

Lessons from a career in public health

When Nutbeam began working in the British NHS in 1978, he quickly became frustrated by the dominant public health messages of the day, which, under the leadership of a new conservative government, adhered to a narrow individual, behavioural approach. 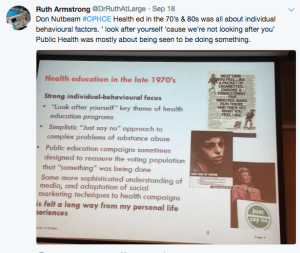 In a fascinating walk through the people, places and jobs that shaped his career, Nutbeam told us how his first major project tackling smoking in hospitals led to fruitful collaboration with, and much learning from epidemiologist, John Catford, who seconded him to work with him on a region-wide study of smoking in the NHS.

Along with Catford, he began working on a new concept – that of health promotion – to replace the narrow definition of health education, which the two wrote about in a seminal 1984 paper. They put forward that, as well as education, health promotion encompassed environmental and organisational change; economic and regulatory activities; and community development, emphasising the importance of preventive health services.

For about two years leading up to the Ottawa Conference on Health Promotion and the Ottawa Charter, both men worked under the direction of renowned German global health and health policy expert Ilona Kickbusch, who was then in charge of health promotion activities at the WHO.

Nutbeam defines his involvement in the Ottawa Charter as his Major Project number 1, and he still loves the simple message it conveys, of “making healthy choices easy choices”. 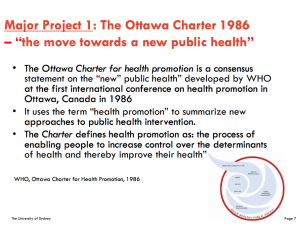 In hindsight, and not detracting from the importance of the Ottawa charter, Nutbeam believes that one of the effects of the wave of enthusiasm for health promotion that followed its release was an unintended diminution in the importance of health education. 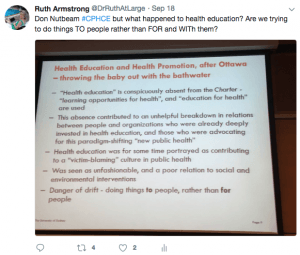 The offer of a Chair in Public Health at the University of Sydney led to Nutbeam’s Major Project number 2, working on a “dream team” that reviewed and revised Australia’s National Health Goals and Targets. He considers the resulting document to be a “blueprint” of how to organise public health in a nation. 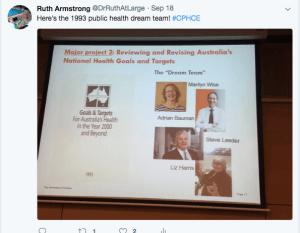 For better, more equitable health in populations, improved health literacy and healthy environments are interlinked. They determine how people live their lives, and how we reduce avoidable mortality and morbidity. 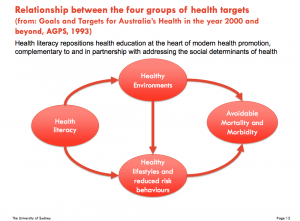 In another salutary lesson for those working in public health, an election was called within three months of the new strategy’s publication and the new health minister was not interested in it. According to Nutbeam, the plan was “basically binned” but he believes the figure above remains the most effective way to understand how to improve public health.

It was another political event that led to Major project 3 when Tony Blair swept to power in England, and lured Nutbeam back to become head of public health for the UK. This led to a revolutionary whole-of-government program to tackle health inequalities – “health in all policies before health in all policies”.

What has Nutbeam learned from his three major projects? He shared the following key lessons:

Health literacy: an idea whose time has come

Based on his observations in the 1990s, Nutbeam published a paper in 2000 entitled, Health Literacy as a Public Health Goal: A challenge for contemporary health education and communication strategies into the 21st Century, which classified different forms of health literacy and pointed out that health literacy was linked to empowerment, connecting it to the social determinants of health.

The paper was virtually ignored at the time of publication, but began to be cited in about 2008, and is now his most highly cited paper. Professor Evelyne de Leeuw, the current Editor of Health Promotion International, where the article was published, confirmed from the audience that it has now been downloaded more than 100,000 times.

Australia is not alone this renewed interest, and in linking health literacy to formal quality and safety standards. Nutbeam says there is a resurgence of interest all around the world. 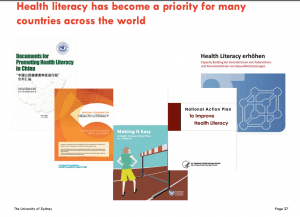 For his current project, Nutbeam is having the time of his life, working along with the University of Sydney, Western Sydney Primary Health Network-WentWest and Western Sydney Local Health District, on a Health Literacy Hub.

The hub aims to create much more health literate health organisations through various interconnecting strategies (see slides). It is about to launch an interactive self-help portal that gives people immediate access to resources and support tools to help them improve interpersonal and written communication.

They currently have 400 people signed up to their community of practice, and staff will be seconded from different parts of the LHD to come and work in the hub, then return to their day jobs as “health literacy ambassadors”. They have developed several priority areas for their work, and research in association with the University of Sydney Health Literacy Lab. 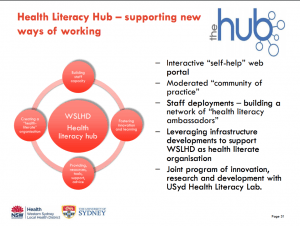 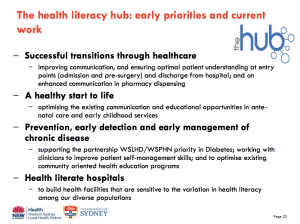 If Nutbeam’s experience in Western Sydney is anything to go by, we will soon be seeing a groundswell in health literacy initiatives in our hospitals, surgeries and health and community services.

As part of the panel at the CPHCE forum, he spoke about the high and ongoing cost to not getting communication right:

We already invest an awful lot in our health care system in poor quality communication. Every interaction that occurs between a health professional and a patient is an investment of time, and we’re paying for that time.

There are hundreds, if not thousands, of poor quality written materials, poorly constructed letters, poorly constructed appointment systems. We’re already massively invested in poor communication, and getting it right can both deliver improved patient outcomes and save the healthcare system cost.”

This advice was enough to convince the financial decision makers in the Western Sydney health district to invest in projects to improve health literacy in health systems and services, he said, “and we were talking about a systems response – a change in the quality of communication within the system – not about improved health literacy within individuals and communities.” 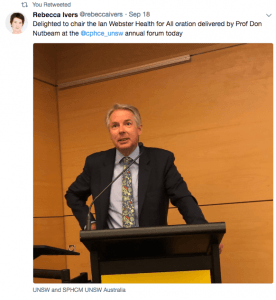 See the interview with Don Nutbeam

• In the next report from the forum, Dr Ruth Armstrong will explore the role of “respect, humility, curiosity, creativity, passion, trust and, very often, patience” in embedding health literacy more widely.

• Bookmark this link to follow Croakey Conference News reports from the CPHCE events in 2018 and 2017.