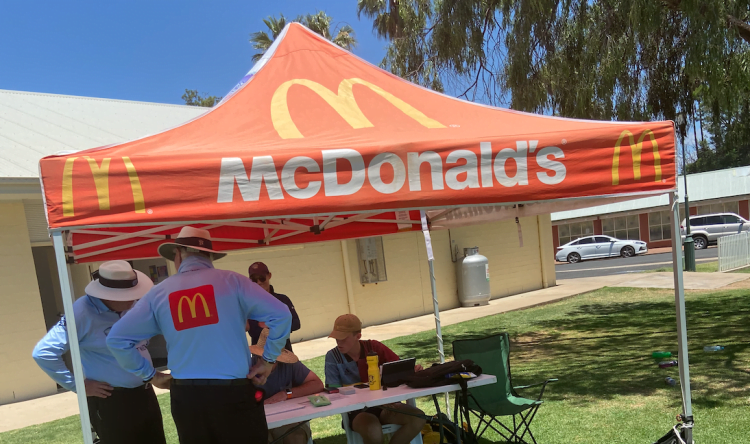 How the food industry blocks action to protect children’s health

Introduction by Croakey: The evidence to support a ban on the advertising of unhealthy food to children is clear – so why have so few countries taken this seemingly straightforward action to combat rising rates of overweight and obesity?

The major reason, according to multiple presenters at the recent 2021 Global Food Governance Conference, is opposition from the food industry, which has used a range of different strategies to combat calls from public health and community advocates for marketing restrictions.

Below, Jennifer Doggett reports on these strategies and how the public health community can fight back, in our final report from this event for the Croakey Conference News Service.

The conference was supported by the Food Governance Node at the Charles Perkins Centre, University of Sydney; the Global Center for Legal Innovation on Food Environments housed at the O’Neill Institute for National & Global Health Law at Georgetown University; and The George Institute for Global Health.

Evidence from around the world supports the case for greater restrictions on the marketing of unhealthy food to children as a cost-effective strategy to reduce the rising rates of overweight and obesity.

A policy brief from the Australia’s Obesity Policy Coalition (OPC) cites research showing that restricting unhealthy food advertising to children on television would be one of the most effective and cost-effective population-based interventions that could be undertaken to reduce obesity in children and adolescents.

Despite this strong evidence base and support from experts, public health advocates, the general community and (to a lessor extent) governments, little action has been taken to restrict the food industry’s ability to market their products – even in countries that have comprehensively banned the marketing of other unhealthy products, such as tobacco.

Presenters identified the power of the food industry as the major factor hindering the development and implementation of policies restricting the advertising of unhealthy foods.

This was compounded by the complexity of the issue, which increases the possibility of unintended negative consequences and practical difficulties in executing a ban, particularly in the area of online and digital marketing.

Food marketing involves multiple actors from a range of sectors, including government, industry and public health. Each of these actors defines food policy differently and these different positions inform the approach each actor takes to the regulation of food marketing.

Dr Yandisa Ngqangashe, a Research Fellow at the Menzies Centre for Health Governance, has analysed the different perspectives of actors in the food policy space, and described how industry actors approach food marketing from a neoliberal perspective.

This includes seeing industry as a legitimate partner in the policy debate and stressing the economic contribution made by the food industry to societies.

From this perspective, industry actors support a self-regulatory approach to food advertising, through tools such as voluntary advertising codes.

Ngqangashe argued that due to the power of  the food industry the neoliberal discourse they favour has set the agenda for much of the policy making around this issue.

In contrast, public health actors are more likely to take a public goods perspective and to emphasise health protection and health promotion as tools to restrict marketing. They are also typically more focussed on the need to protect children from the marketing of unhealthy foods.

Ngqangashe stressed the importance of understanding these different perspectives in order to influence the debate over future policy and regulatory approaches to this issue.

In a separate presentation, Ngqangashe discussed an analysis she conducted on the role of authority in the debate over food marketing, based on 24 semi-structured interviews with key actors in this debate.

Key findings were that in most domains of authority investigated, the food and/or advertising industry claimed authority with limited or no opposition by governments or other actors.

In particular, on the issue of advertising restrictions, both government and industry actors recognised the authority of the Australian Association of National Advertisers.

Ngqangashe pointed out that this was inconsistent with the legislative power held by the Australian Communications and Media Authority in overseeing the code. Industry actors also claimed to have expert and principled authority in this area.

This analysis was useful, Ngqangashe concluded that, as it demonstrated how industry has more pathways than governments and civil society actors to assert its authority in this debate, which she argued is one reason for industry’s strong influence over government policy.

The conference heard from a number of researchers who had investigated the tools and tactics used by the food industry to resist attempts by governments to restrict their ability to market and promote their products.

Research conducted by Associate Professor Kathryn Backholer from Deakin University found that the industry spends billions of dollars every year on advertising and promotion to normalise the consumption of unhealthy foods.

Backholer stated that in Australia there has been little national leadership on junk food advertising, although some state and territory governments have attempted to restrict advertising in their jurisdictions.

Her presentation focussed on how the food industry responded to an announcement from the Queensland government that it was dropping junk food advertising on government assets.

Backholer investigated why this commitment has not, thus far, been implemented using a number of techniques, including a freedom-of-information request for relevant documents arising from the government’s consultation process on the proposed ban.

Specific arguments against advertising bans made by the food industry included the following:

Backholder identified key industry strategies used to combat the proposed ban (see her diagram below). These included developing coalitions with charities, attending relevant meetings to discuss advertising policies, engaging with consultation processes, such as writing submissions to inquiries, and direct lobbying of politicians. 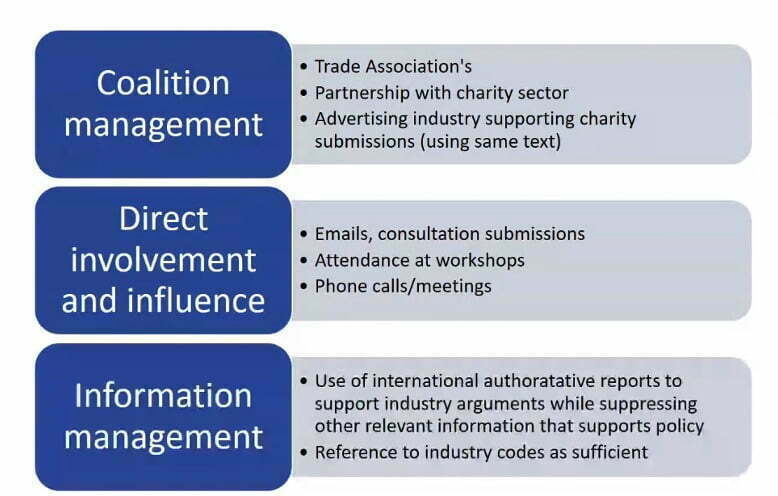 Significant changes were made to the announced policy after this consultation process, which Backholer directly attributes to industry involvement.

She advised public health advocates to learn from this experience and to pro-actively seek to combat the influence of the food industry in the future if other state/territory governments attempt to restrict advertising in their jurisdictions.

The new frontier of digital marketing was the subject of a number of presentations, which identified this rapidly growing area as the major challenge facing governments and regulators when attempting to restrict children’s exposure to the promotion of unhealthy food.

Associate Professor Bridget Kelly from the University of Wollongong, highlighted the increased use of digital marketing by the food industry, citing predictions that expenditure on digital advertising worldwide is predicted to double between 2019 and 2024.

She described how digital marketing has particular impacts on children as it allows for greater behavioural targeting which can heighten its impact and can impact their privacy. 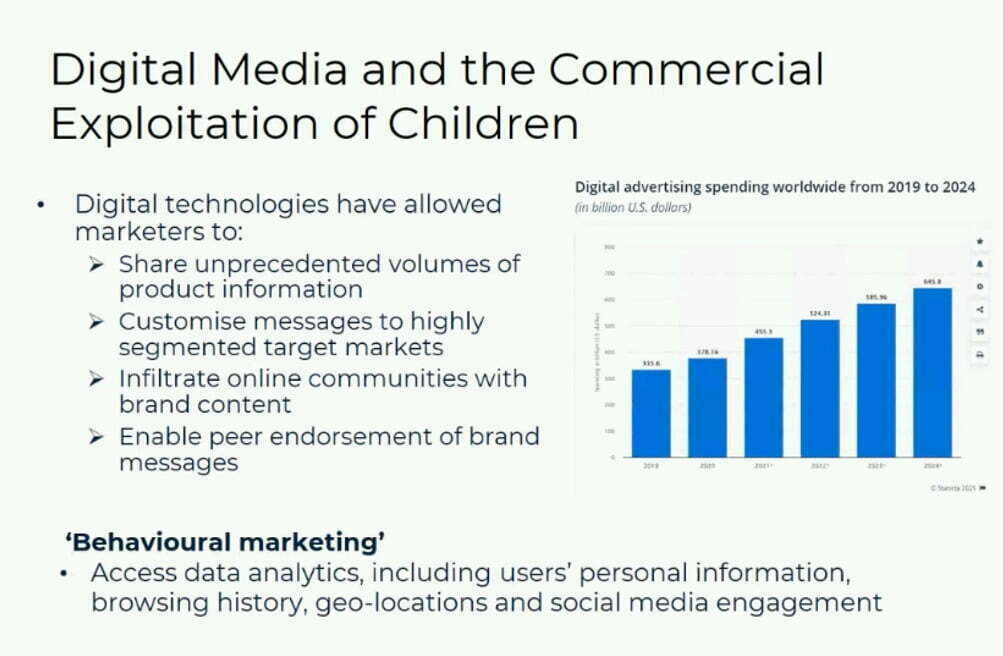 Digital marketing also raised regulatory and research challenges compared with more traditional forms of media such as print and TV.

Kelly used a framework developed by the World Health Organization for monitoring of digital marketing of unhealthy products to children and adolescents called the “CLICK monitoring framework.” 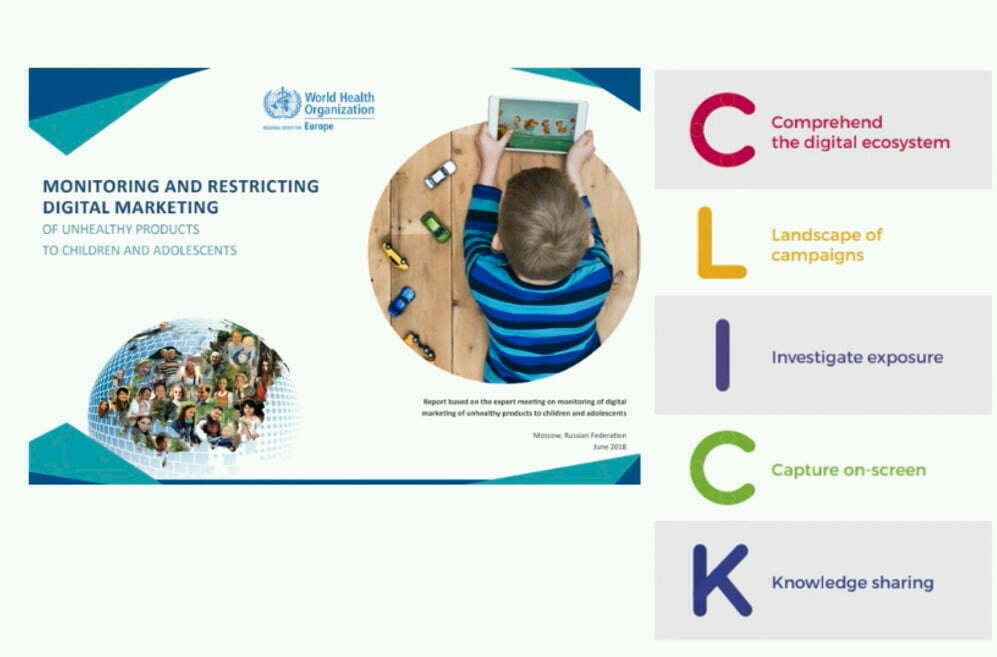 Her research aimed to quantify and assess exposure to children to online monitoring in Australia, including via social media, Apps and online browsing.

She found that the children participating in the study were exposed to an average of 17 food advertisements per hour with the rate of advertising 50 times higher for foods that should not be marketed to children, according to guidelines from the WHO.

Exposure rates were particularly high on mobile devices, totalling an average of 170 food promotions each week, which is much higher than children would be exposed to via TV.

Most common advertisers were brands associated with unhealthy foods. 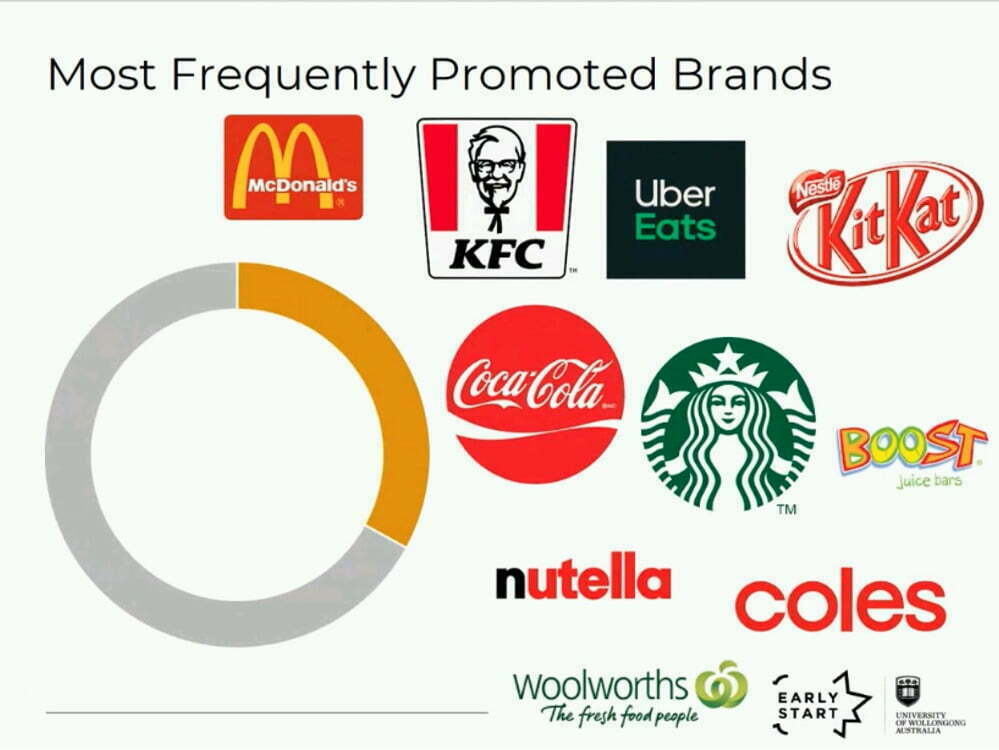 She argued that this high rate of exposure highlights the need for governments to focus on digital marketing in policies and regulations.

Kelly cited examples of action being taken by other countries, including the UK, on digital marketing, and argued that Australia should be doing more to combat this growing influence over children and young people.

Katarnya Hickey, legal and policy advisor to the Obesity Policy Coalition (OPC), presented the OPC’s work on the digital marketing of food to children.

She said that the OPC’s position is that children have a right to be online without being bombarded with food marketing.

Research undertaken by the OPC on this issue has found that the food industry uses marketing models designed to collect data on children’s preferences and media use in order to target those most likely to be influenced.

She cited surveys showing that the community expects government to act on this issue and said that despite the high level of community concern, there are no federal laws currently on the digital marketing of food to children and instead the government has supported industry self-regulation.

Hickey said that this aproach had limited effectiveness due to the difficulty in enforcing age limits, definitions of marketing and exclusions of specific types of marketing in the digital environment. 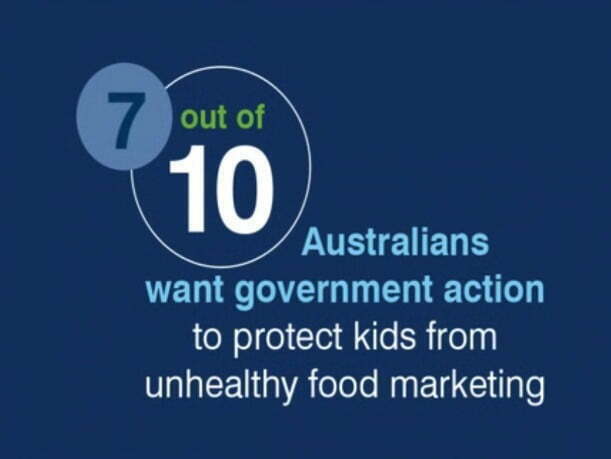 Despite the long road ahead, there have been some positive developments internationally, including a statement from the UN Committee on the Rights of the Child, which says that states should prohibit digital targeting of children for marketing, and a proposed new UK ban on online food advertising.

Hickey also mentioned Australia’s recent review of privacy legislation as going some way towards protecting children from online marketing by the food industry.

She outlined the OPC’s four key recommended actions on digital marketing to children:

Challenges involved in implementing the above recommendations include finding a balance between restricting advertising and protecting privacy.

Hickey discussed how age verification can be effective in limiting children’s exposure to marketing online but can also cause additional problems, such as impacting children’s privacy.

She also stated that any advertising restrictions need to include the social media accounts of food manufacturers and to restrict brand marketing as well as specific product marketing. 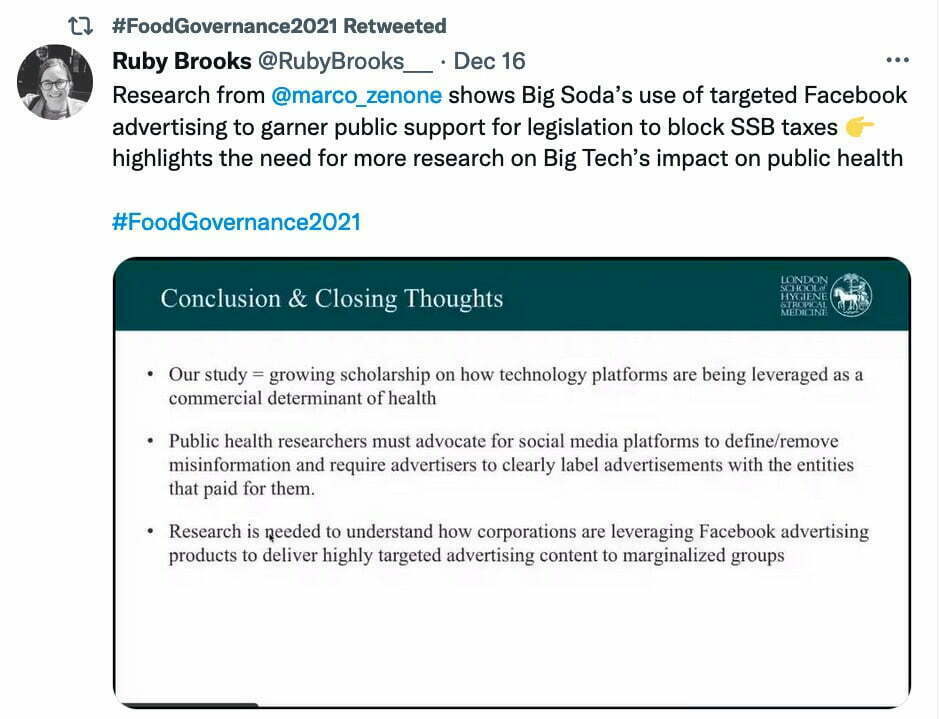 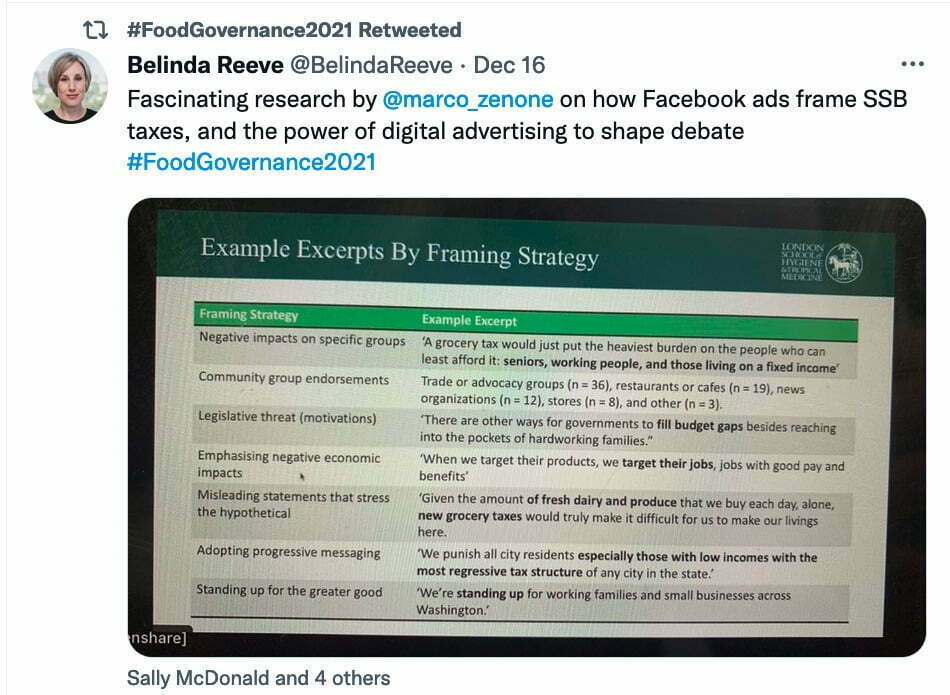 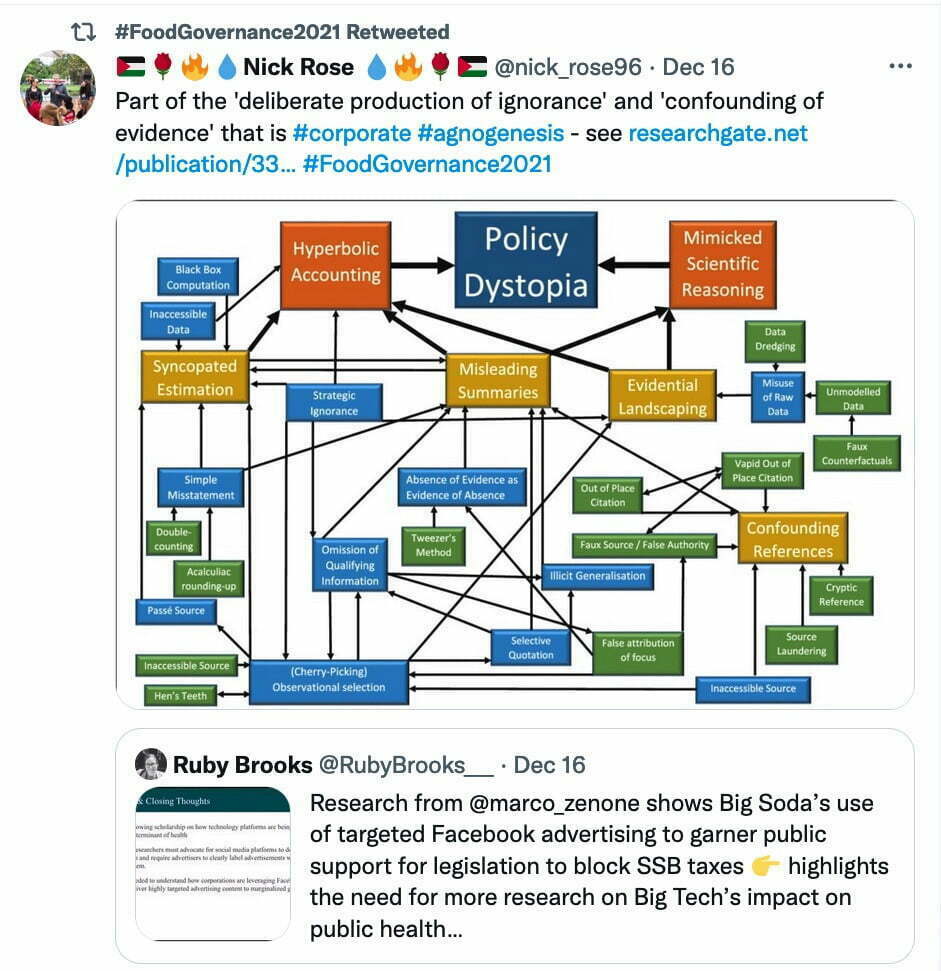 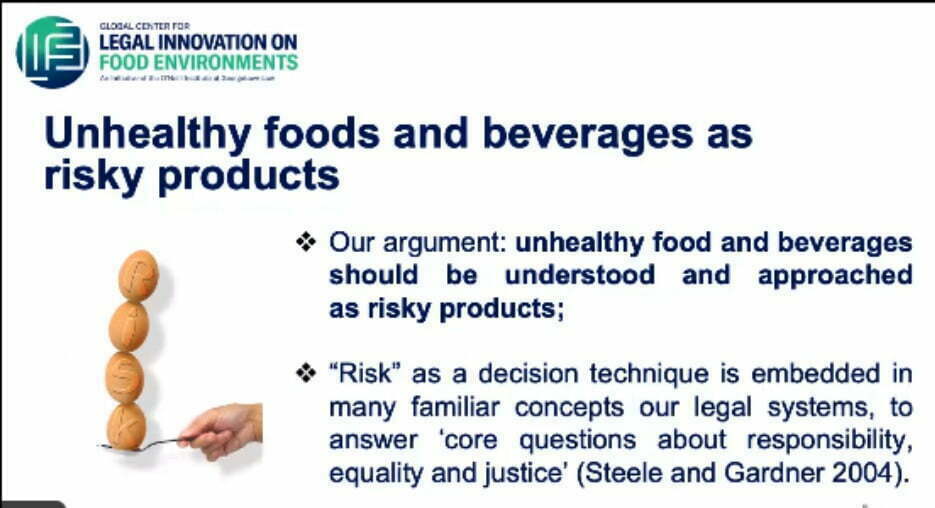 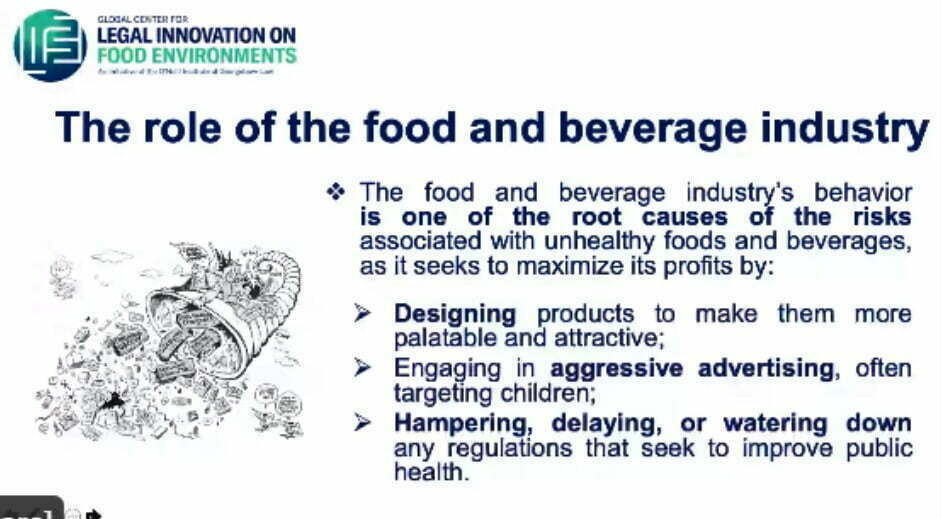 Bookmark this link for all of our coverage from #FoodGovernance2021.