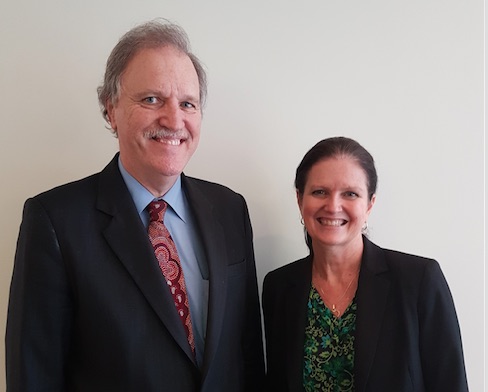 In difficult times, can sharing personal stories help put a stop to attacks on the poor?

As poverty in Australia increases and the Federal Government threatens cuts to the poorest as its first formal act, ACOSS chief Cassandra Goldie has urged health professionals to step out of their silos and advocate for a common humanity.

In a stirring, heartfelt and deeply personal keynote address to the Centre for Primary Health Care and Equity annual forum in Sydney this week, Goldie called for a new pact in supporting Australia’s most vulnerable.

With Goldie due to appear on Q&A next Monday alongside celebrated health equity researcher Sir Michael Marmot ahead of his debut Boyer lecture in Sydney, it was both a fitting prelude and timely clarion call.

Offering a rare insight into her personal journey to social advocacy, Goldie revealed she was given up for adoption by her birth mother in 1964 – a young single woman who could not afford to care for her in the days before there was a welfare safety net.

Her adoptive father was a Second World War veteran who processed his experiences by watching newsreel of the war’s horrors, including Nazi atrocities and the death camps, impressing some powerful lessons on the young Goldie.

“That was a very real part of my understanding of how the world is,” she told the CPHCE forum at UNSW.

“It helped me to understand that we’re all capable of everything and every move we make determines which way we continue to move and shape history, that the small moments in time really matter, whether we stand up and stay with it or whether we allow ourselves to go into a place of fear.”

You can read her full speech – Oration (download PDF) – or watch the interview below.

As an adult, Goldie said falling in love with a woman had added another dimension to her story.

“Often we start collaboration and partnership from a point of our external public identity – what role we have what job we are in, the institutional side of that – and one of my learnings is that it is actually through sharing some of the more personal stories that we really forge a renewed commitment to common humanity, to wanting to see a better world.”

Instead of hunkering down in professional silos and giving in to divisive rhetoric, Goldie urged delegates to reach across institutional divides and refocus on the fundamentals.

“The aspiration, along the journey of complex policy reform, is still pretty basic,” she said.

While health policy needed to be “front and centre in debates and conversations that we have with the community about what decisions need to be made to forge a better future”, Goldie said those working in health ought not “be shy of buying in on the economic debates”.

With the top five percent of households now taking home a tenfold higher weekly income than the nation’s poorest 10 percent, and the government threatening to wipe a further $4.40 from the meagre $38 a day Newstart unemployment benefit and $7 from the Disability Support Pension, Goldie said it was crucial to return a human face to the debate.

“I think there was no clearer evidence of that than when the Prime Minister leaned down and gave $5 to a person who was homeless and what that person said about what he did that day was that he finally got a decent meal.”

At the same time that they were wiping more than $1 billion off welfare across the forward estimates, Goldie said the government was proposing to hand those on incomes of $80,000 or more a $6-a-week tax cut – a stark declaration of priorities.

“We have both of the major parties highly sensitive to how we’re going to meet the concerns of the wealthiest people in Australia, whilst there appears to be very little concern about what we’re doing to cut the incomes of people who are on the very lowest in the country,” said Goldie.

“It would be an extraordinary indictment on the Federal Parliament as the first order of business to increase poverty in Australia.”

With the battlelines so clearly drawn, Goldie said one thing was clear: “It is up to us. And isn’t that a wonderful thing to know, that change is in our hands.

“Our task, our challenge, is to present the confidence that the success will come from grounding our commitment in policies, in reform which is about a shared common humanity, that deeper divisions will not deliver for anybody and it certainly will not deliver for our children.”

The forum’s theme was Access and Equity, and research was presented exploring how to deliver more meaningful solutions in primary care.

Associate Professor Liz Harris, from the Sydney Local Health District’s Health Equity Research and Development Unit (HERDU), talked about the importance of consultation with communities and moving beyond tokenism to make it deliver for those in need.

This involved recognising that equity was not just about the social determinants of health but also their unequal distribution. 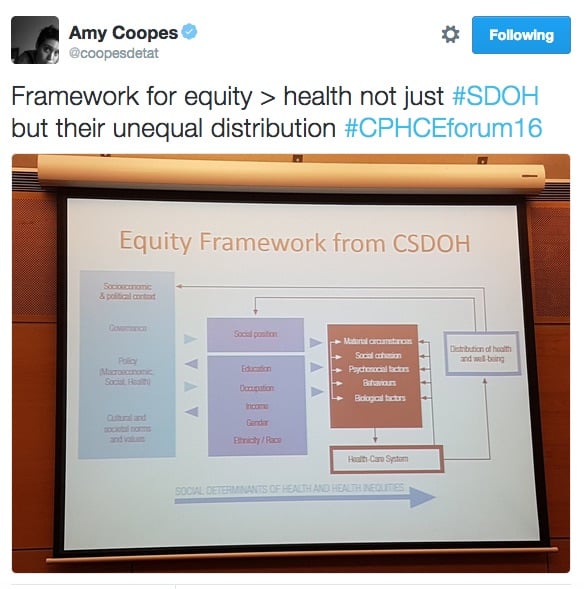 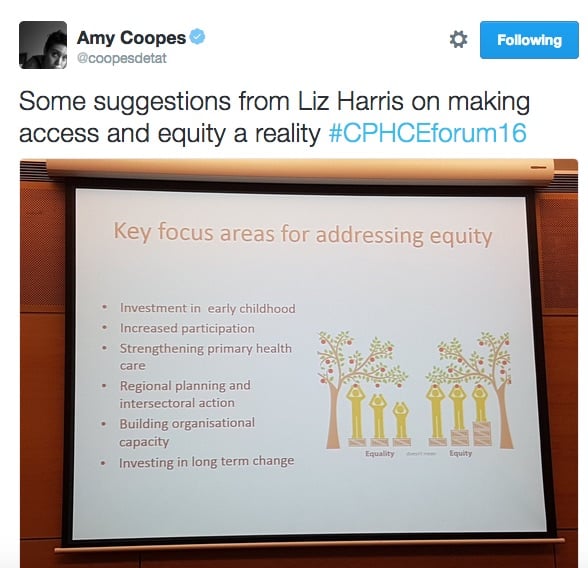 Jean-Frederique Levesque, from the Bureau of Health Information, said it was critical to look beyond the causes of access and equity gaps even further upstream to the ‘causes of the causes’.

It was also vital to acknowledge that measuring access and disparity – ‘who decides what access is?’ – was in itself a political act, and that these debates were framed from and driven by the supply (policy and provider) side of the equation, which was very disempowering, said Levesque.

The question of funding and ‘who pays the piper’ was discussed at length, with Emeritus Professor Ian Webster from CPHCE noting that there were tremendous ideologies and power blocs at play in the health system as well as significant hubris to overcome.

One delegate asked the presenters how the community could be heard while powerful voices of those like the AMA had the ear of the Prime Minister on a weekly basis.

Returning to and reaffirming the role of community organising and grassroots initiatives was seen as vital, with Anthony Brown from Health Consumers NSW reminding those present that Capitol Hill was not the only game in town.

“We have this very tough environment around privatisation, the competitive environment has I think deeply damaged our capacity to open up doors and collaborate in a local way with local services,” said Goldie.

“It is not one size that fits all, it’s about looking for the strengths in a particular community… looking outside of the health area to who your partners and collaborators could be and to really investing the time in growing those relationships.”

At the end of the day, it was also about recognising that politics and lobbying were emotional labour, drawing on the lessons of the climate movement to understand that change had to come from the heart.

Goldie said: “In our own effort to persuade political leaders I think it’s a very comfortable place sometimes to yell, but it’s actually not effective. It is also an emotional experience for political leaders to change their mind.

“You can generate all the research that you like, if it doesn’t accord with somebody’s own emotional understanding of the world they will reject it, they will find a way to dismiss it.”

Professor Evelyne de Leeuw, director of the Centre for Health Equity Training Research and Evaluation (CHETRE), said the co-creation rather than translation of knowledge was a simple but powerful approach to community engagement.

On Indigenous health, for example, she said Australia continued to fall woefully short, but the ‘level playing field’ was a myth for all except the white heterosexual.

Two other papers were presented exploring how access and equity could be improved through new models of care.

Amy Prince from the South Western Sydney Primary Health Network spoke about her work on the joint Australian-Canadian IMPACT study, which is looking at local innovation partnerships with vulnerable communities at six sites across the two countries to boost access to primary care.

Targeting people with diabetes, IMPACT is currently exploring how new technologies and tools can improve health literacy, empower patients in their care and ultimately improve outcomes. 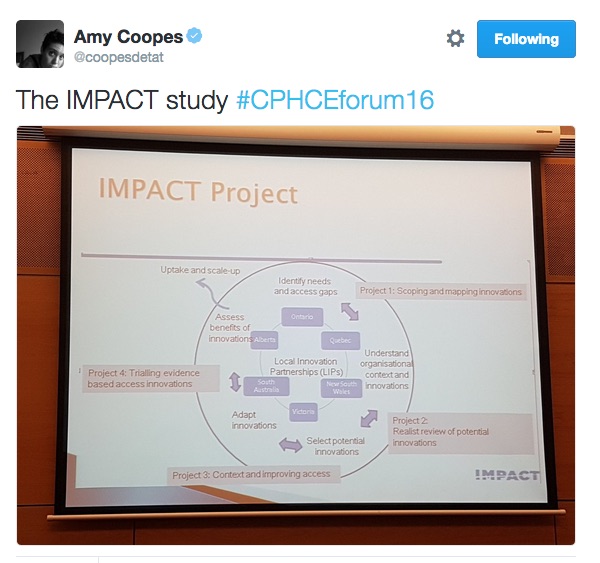 Julie McDonald from south-west Sydney’s SEaRCH research hub, presented a six-site study on how co-location models such as Health One NSW or GP Superclinics affected access.

The superclinic model scored highly on specialist medical access while Health One type models performed well on acceptability and access for vulnerable populations, as did not-for-profit models.

Overall, she said co-location could provide ‘incremental changes’ to access where supported by funding and local opportunities, while fee-for-service adjustments did little and a profit/viability driven-model of care could be either positive or negative. 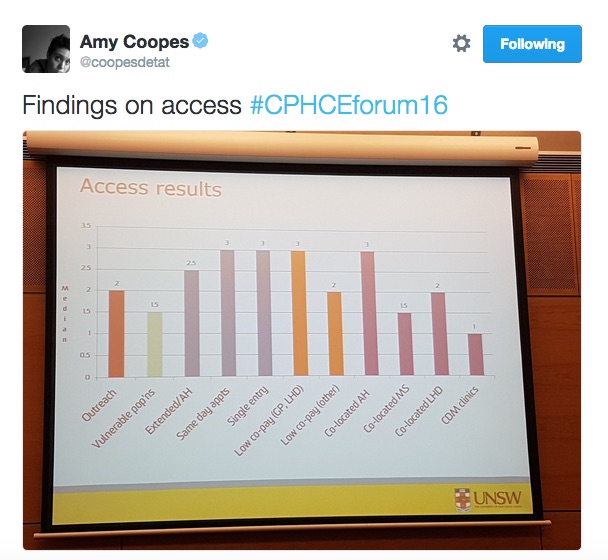 With the gutting of federal research funding, 2015 had been challenging year for the primary care community and sent ripples across Australia, said CPHCE’s Professor Mark Harris. The transition to PHNs and new models such as the health care home had also been noteworthy.

Rather than mere academics, de Leeuw said those engaged in this area also needed to be activists, reminding delegates of Marmot’s pioneering work ahead of his highly-anticipated Australian lecture series. 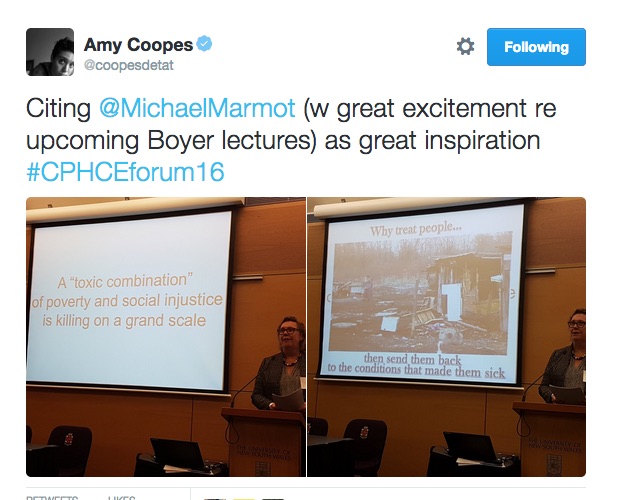 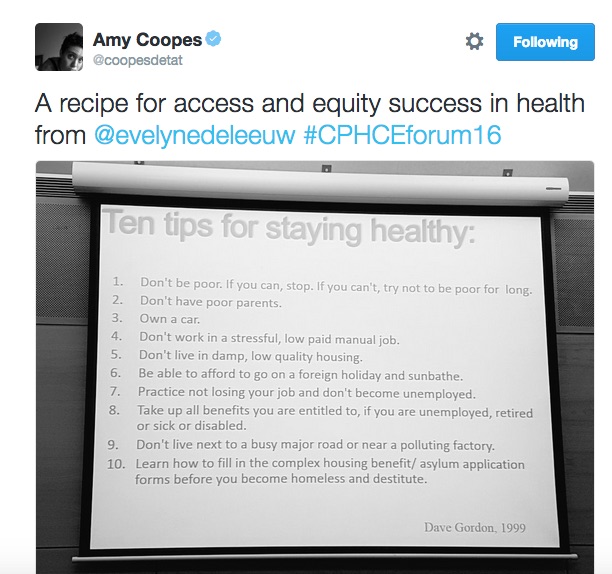 Thanks to all #CPHCEforum16 tweeps 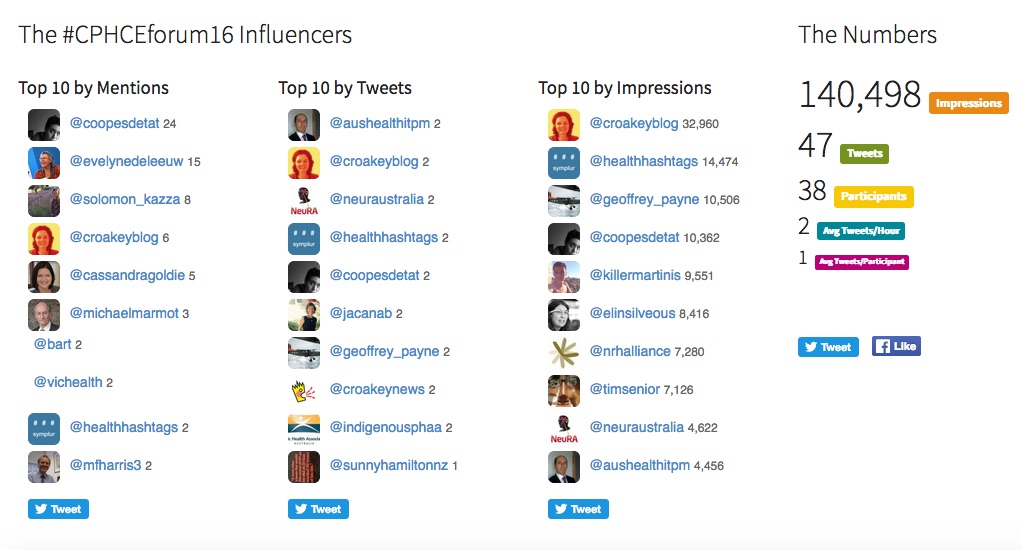 PrevPreviousCalls for end to ABC, Monash partnership with Swisse
NextNT election: how healthy and fair will the next government be?Next