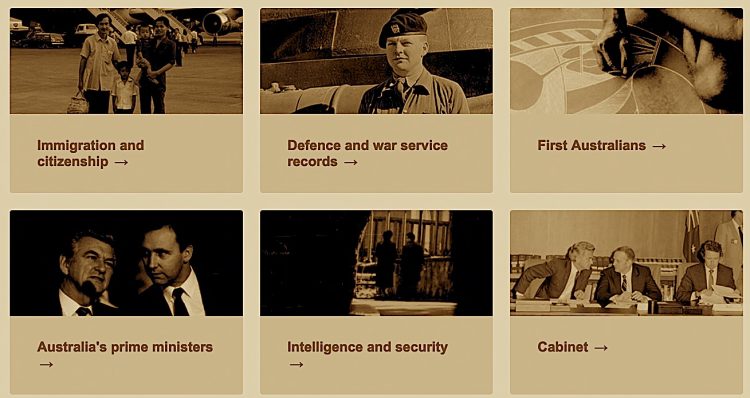 Most popular categories displayed by the National Archives on 16 June, 2021

In neglecting the National Archives, the Morrison Government turns its back on the future

Introduction by Croakey: More than 130 senior academics, historians and award-winning writers, including eminent health and medical researchers and Indigenous scholars, have signed an open letter urging the Prime Minister to ensure the future of the National Archives of Australia, “one of the pillars of our democracy”.

The letter expresses disappointment that the recent Federal Budget, while increasing funding for other national institutions including the Australian War Memorial, made no allocation for the National Archives, an institution that makes decision-making more transparent and that “holds governments, past and present, to account”.

The letter says the most important users of the National Archives have yet to be born, and that “the value of many items in its collection may not become apparent for many years because we simply do not know what questions future inquirers may ask”.

“Only in recent years, for example, have researchers begun to tap the riches of the National Archives’ repatriation records, the largest continuous record of the health of any people anywhere, for medical as well as historical research,” the letter says.

Other health and medical researchers to have signed the letter include Sir Gustav Nossal and Professor Fiona Stanley.

The letter aims to bring the Archives’ budgetary neglect to the attention of the Prime Minister and senior ministers in the wake of “silly remarks” by the assistant minister to the Attorney-General, Senator Amanda Stoker, dismissing concerns about their future, writes one of the signatories, Emeritus Professor Judith Brett.

Why didn’t the Federal Government increase funding for the National Archives of Australia in its recent budget?

We know it wasn’t because of budget discipline. Money was splashed around on all sorts of worthy causes. And the emergency funding to save film and magnetic tape recordings from disintegration was modest: A$67 million over seven years.

Nor was it because a scorn for history is in the Liberal Party’s DNA. The party’s founder, Robert Menzies, was a history buff. His library, which is the centrepiece of the newly established Robert Menzies Institute at the University of Melbourne, is full of books of history and biography.

Moreover, his Government established the precursor of today’s institution, the Commonwealth Archives Office, in 1961 so the records of the past could help guide the future. Prominent Liberals like Paul Hasluck and David Kemp have written histories, as has John Howard in The Menzies Era.

There are plenty of distinguished Liberal-aligned historians, and historians across the political spectrum supported the open letter to the prime minister, spearheaded by journalist Gideon Haigh and academic Graeme Davison.

Read more: Our history up in flames? Why the crisis at the National Archives must be urgently addressed

Some commentators have seen the failure to provide the archives with emergency funds as a skirmish in the culture wars against an intellectual and cultural left purported to be obsessed with identity politics. This, the argument goes, is of a piece with the Government’s apparent hostility to universities, its increase in fees for humanities degrees and its parsimonious treatment of the arts.

But was it that deliberate? Perhaps it was just careless philistinism in a budget designed for a forthcoming election. It was a budget addressed primarily to groups of voters rather than to national problems, and the users of archives will never swing a marginal electorate. Last week, The Australian ran an editorial on the issue, which concluded: “Failure to fund the NAA properly is an oversight that must be corrected.”

The Government is wrong to think it is only professional and academic historians who use the archives. So do family historians, as the archives include personal records of hundreds of thousands of Australians. They are especially relevant to those of non-Anglo descent who had to apply to government authorities for various exemptions and entry permits. These include Indigenous Australians, Chinese living in Australia or displaced persons wanting to immigrate.

Haigh has pointed out that Treasurer Josh Frydenberg’s defence last year of his eligibility to sit in parliament depended on a document in the archives – the certificate of exemption from the provisions of the Immigration Act for his mother, then a seven-year-old girl deemed to be “stateless”.

The National Archives sit in the Attorney-General’s department. Queensland Senator Amanda Stoker, who is assistant minister to the Attorney-General as well as Assistant Minister for Women and Industrial Relations, defended the Government’s failure to provide the recommended emergency funding with the facile claim that “time marches on and all sources degrade over time”.

The Government had nothing to be embarrassed about, she said, even when she was reminded Prince Charles had expressed his alarm at the threatened loss of records. Judging from her silly remarks, she seems to have given the subject little thought. The aim of the letter is to bring the archive’s budgetary neglect to the attention of the Prime Minister and his senior ministers.

Read more: Jenny Hocking: why my battle for access to the ‘Palace letters’ should matter to all Australians

While I do not think the neglect of the archives is a deliberate move in the culture wars, it is evidence of the Coalition’s truncated temporal imagination. This is in part an occupational hazard of politicians with their eyes on the electoral cycle. But it is also evident in the difficulty too many of the Coalition have in understanding what climate scientists have been telling them about the future, so they focus on present costs as if future costs will never arrive.

To understand the value of archives, we have to think not just about the past but about the future, when the present will be well and truly over. As the open letter says, the National Archives’ “most important users have not yet been born”, and we do not know what questions they will want to ask.

Thinking about time is difficult, wrenching oneself out of the dramas and routines of the present to fully imagine worlds that were and will be different, confronting our transience and our mortality.

Historians are experts in temporal imagining. They spend their days reading the words and examining the objects of the men and women who walked the world before us. We hope the Prime Minister will heed our words on the future’s desire for a memory bank of Australian life as full and rich as it can be.

Judith Brett is Emeritus Professor of Politics, La Trobe University and a signatory to the open letter.

See Croakey’s archive of stories about the latest Federal Budget.