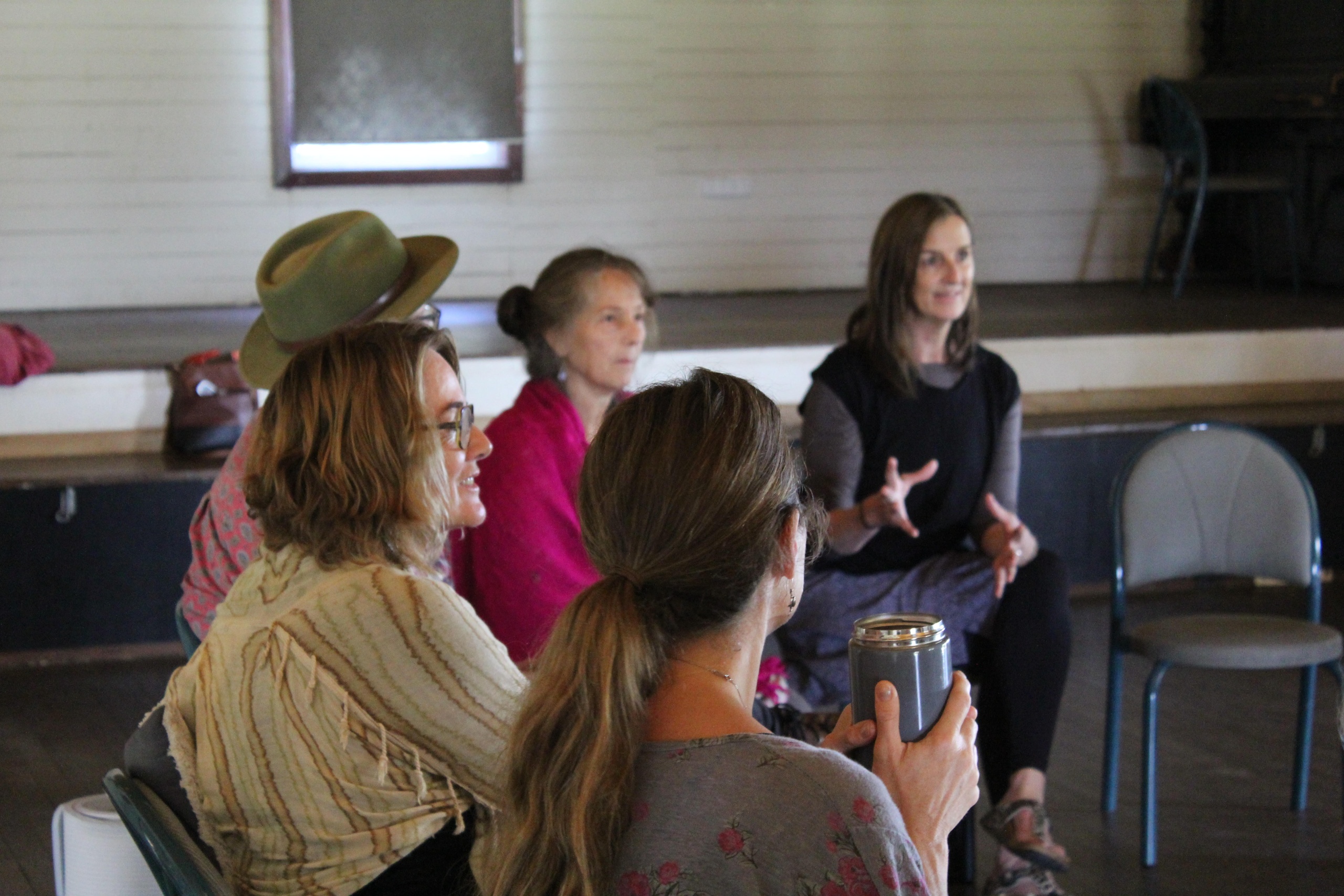 Health services in rural and regional communities have been inundated with increased needs for their services after flooding around the country stretches into a third year.

Some health services – including Aboriginal Community Controlled Organisations and nursing homes – have found themselves under water while unsafe roads have made it harder for people to reach healthcare.

Health workers are contending with new health concerns including illnesses related to contaminated flood waters, mould and mosquitoes as well as high stress levels as people lose their homes, food sources and livelihoods.

Growing concerns about Australia’s continued inaction on climate change, despite its presence being increasingly keenly felt, is also contributing to the distress felt by communities. Some have now experienced successive extreme floods, fires and droughts.

Meanwhile, community and primary health services in Victoria, including Aboriginal Community Controlled Organisations, have been integral in the flood response.

Community controlled health organisations are the “beating heart” of Aboriginal communities, many of which have been directly affected by recent floods, Abe Ropitini, Executive Director of Population Health at the Victorian Aboriginal Community Controlled Health Organisation (VACCHO) told Croakey.

VACCHO was quick to respond after floods hit some of its member organisations in October, providing immediate food and housing relief, in part supported by its own appeal.

Many of VACCHO’s 32 member organisations are spread along the Murray River which has experienced extensive flooding.

Njernda Aboriginal Corporation in Echuca and Kerang Aboriginal Community Centre have been damaged and are facing operational challenges due to flooding and the Cummeragunja Housing & Development Aboriginal Corp on the banks of the Murray river was entirely evacuated.

As Ropitini explained, these organisations provide a range of health services, including housing, contributing to the significant investment needed for rebuilding.

The Victorian and NSW Governments recently announced $558 million for the redevelopment of Albury Base Hospital – a health catchment area for many regional communities impacted by recent floods. 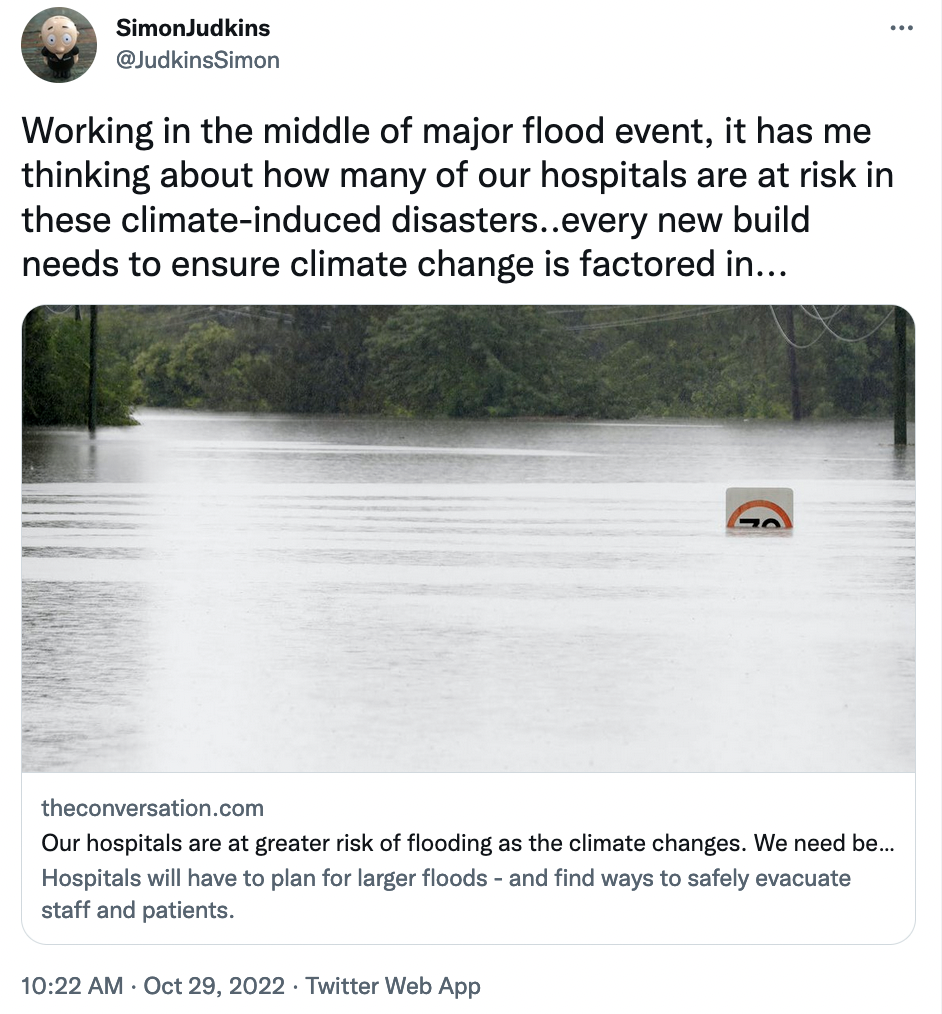 Ropitini says there is a need for a more comprehensive, well thought out policy and strategy around community and primary health.

“We need to see a greater level of investment come into all of the community controlled health services, which are often the only option for Aboriginal families in regional areas,” he said.

Flooding along the Murray also means that ACCHOs working along the state border are needing to navigate the relief services of two different states and the federal government, although Ropitini notes they are experienced and skilled in doing this. 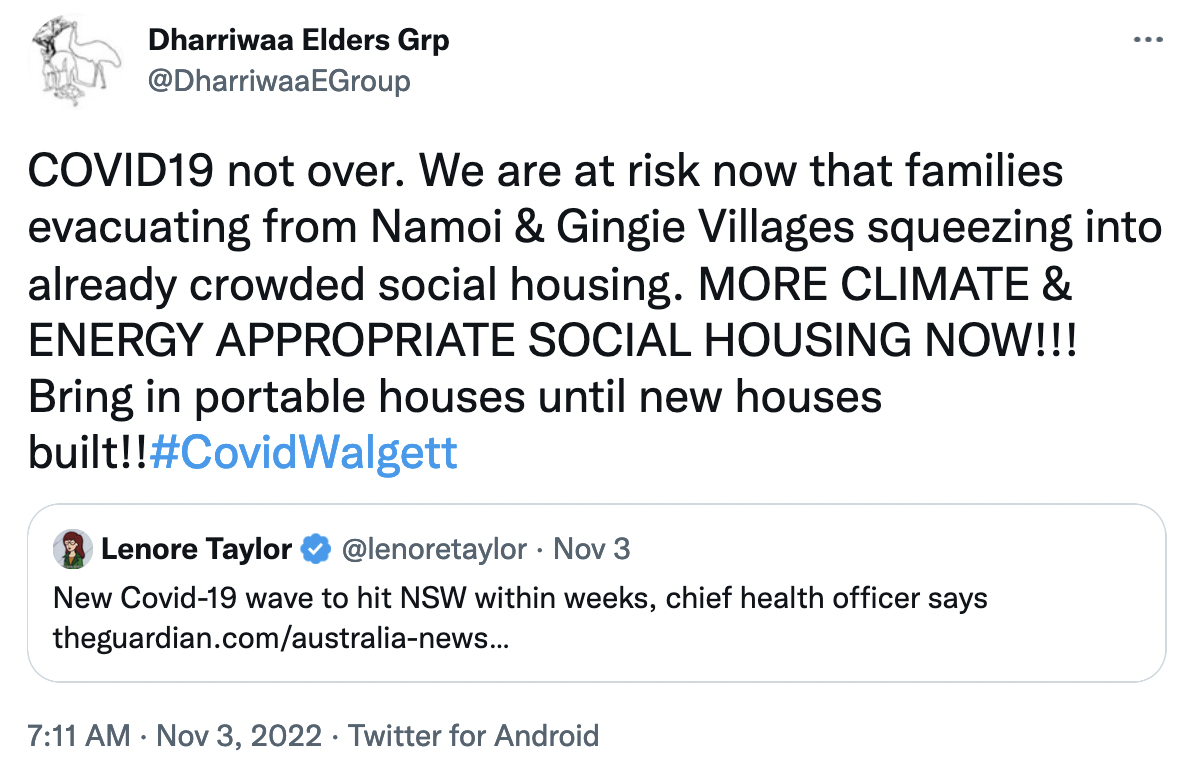 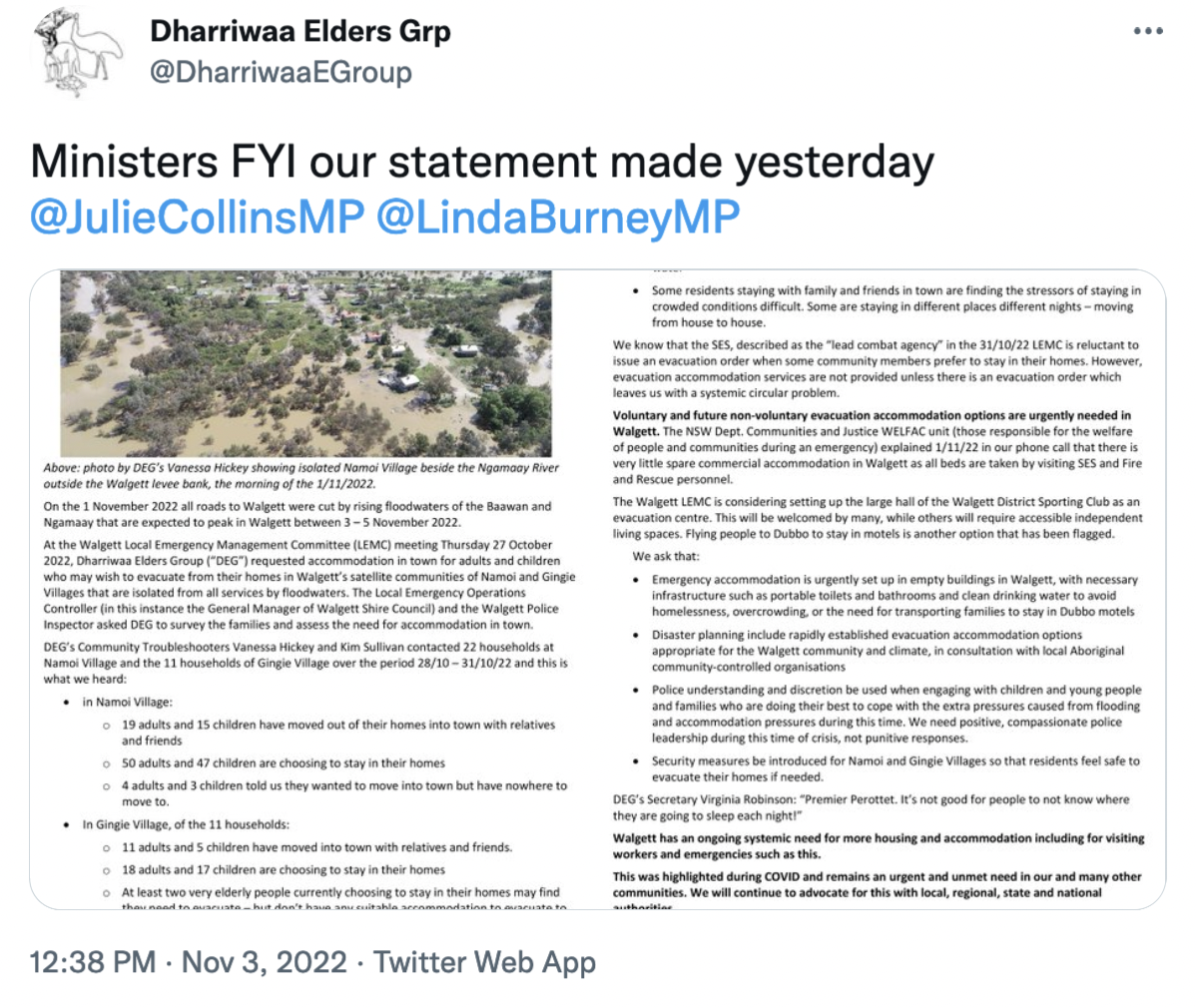 Meanwhile, in New South Wales, many communities are adjusting to the reality of “multiple devastating unprecedented fires, storms and floods in the past few years”, Lisa Brown, a registered psychologist from the Mid North Coast region of NSW, told Croakey.

Brown spoke to Croakey after a free two-day weekend workshop in Lismore delivered by friends and colleagues, including First Nations community members, to meet the impact of climate-related disasters and the effects of COVID-19. 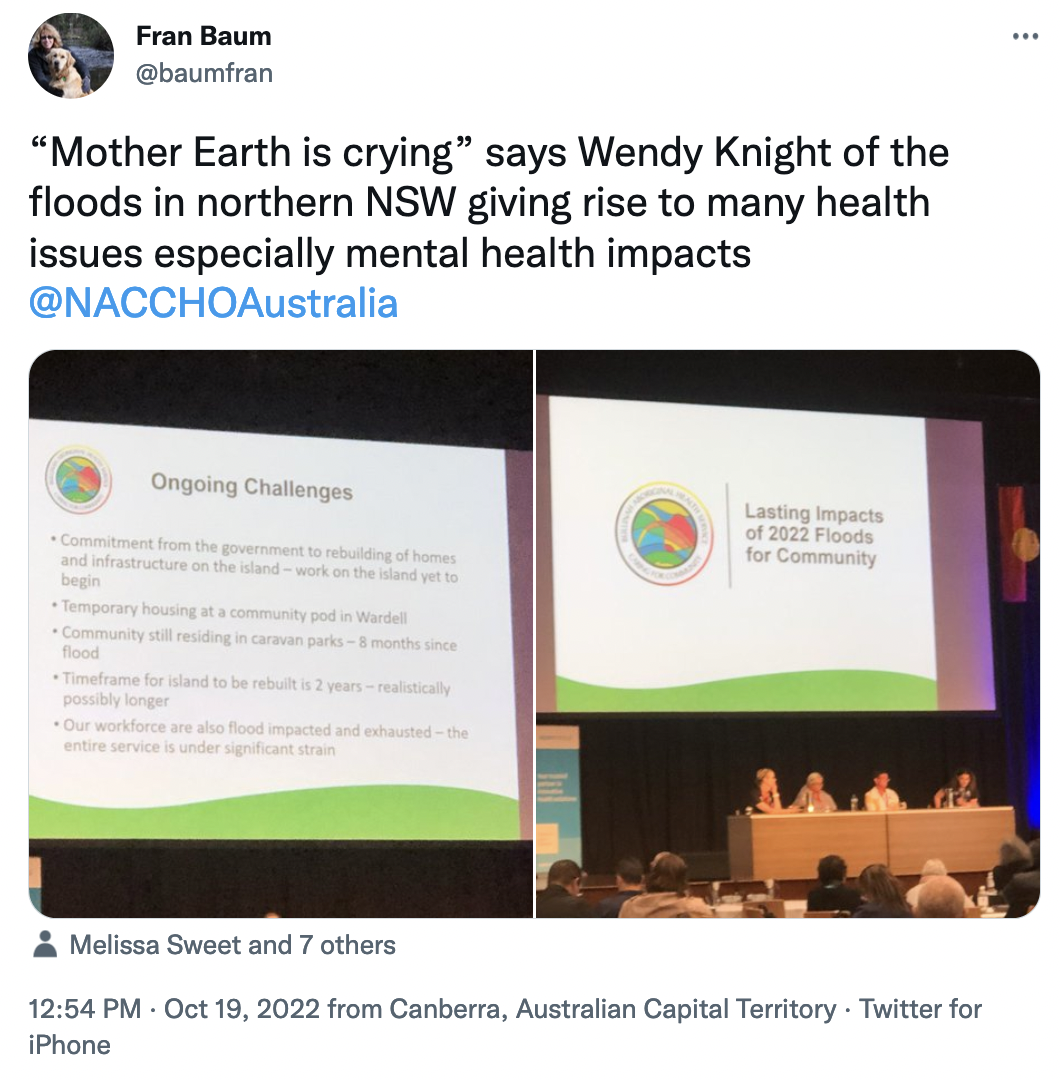 While the recent federal budget included specific funding for a national climate health strategy and mental health supports for flood-affected communities in NSW, Brown is concerned that these announcements are not meeting the true needs of the community.

She wants to see more resources directed to treating the causes of climate anxiety and not just the symptoms.

“For some time, I’ve witnessed the impact of the climate crisis as a ripple effect of trauma that shows up in people’s mental, physical and emotional wellbeing through significant increases in stress, anxiety and depression,” said Brown.

“It feels like we are continually locked in systems that treat symptoms rather than target prevention or support the development of our inner resources in meeting the challenges we face through climate disasters.”

Brown, who is a member of Psychology for a Safe Climate, believes Australia has a “unique opportunity to be innovative in the areas of mental health in meeting the mental, physical and emotional health challenges that are emerging with the climate crisis in order to contribute to a healthy, more compassionate world”.

She cited examples such as the UK-based all parliamentary group Mindfulness Initiative and its report Reconnection: Meeting the Climate Crisis Inside and Out.

“We need to find new ways to meet the effects of climate change with therapeutic interventions that include individual therapy, group programs, community engagement and while integrating the voices and perspectives of First Nations Peoples.”

“We saw the same impacts through the bushfires a few years ago in Gippsland, and other areas and the long-term need for Aboriginal community controlled services to be able to provide trauma-informed mental health services that address that full wraparound of what makes up somebody’s sense of mental health and well-being.”

These problems may be more noticeable with rural and regional areas struggling to attract and retain GPs, and with GP practices under increasing financial pressures.

Croakey also spoke to rural GP Professor Bruce Chater and Anne Chater, practice manager of Theodore Medical, who were caught up in the 2010 floods that saw the entire Queensland town of Theodore evacuated. Their medical practice, their own home and the homes of some of their staff were all flooded.

In the immediate aftermath, Anne Chater recalls needing to ensure tetanus shots for volunteers and the public health risks posed by accumulating rubbish.

In the short term, Professor Chater says the community really came together to respond. Some problems, he says, weren’t as apparent until the six or 12 month mark, when the reality of the floods began to set in for some people who had “lost their livelihood or in some cases in our town, lost their farms, because they went broke”.

Some of the flood-related health problems they saw included leptospirosis and increased allergies due to mould.

The Chaters chose to bulk-bill their patients in the months following the floods but said that reality began to set in later, with soaring premiums meaning many people couldn’t afford $50,000 a year to get flood insurance.

“…the adrenaline part of the whole incident dissipates and you’re left with the reality of the insurance company’s finances, how are we going to afford to continue to pay our staff…how do we run a health service when our staff are mopping up all their houses?” said Anne.

The Chaters also shared advice about their experiences recovering from the floods via a broadcast for The Rural Doctors Foundation earlier this year and the foundation also has more resources available for medical practices. 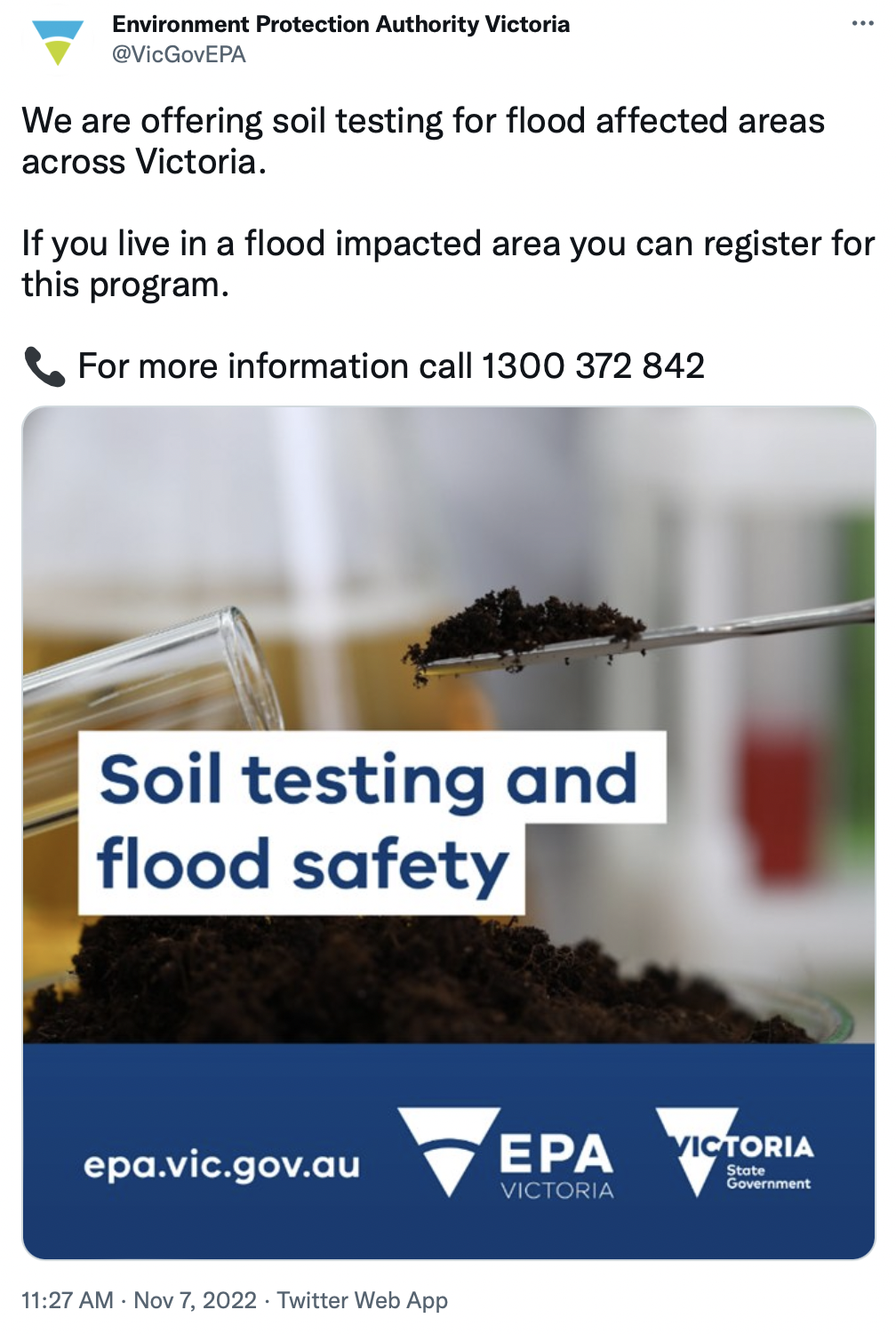