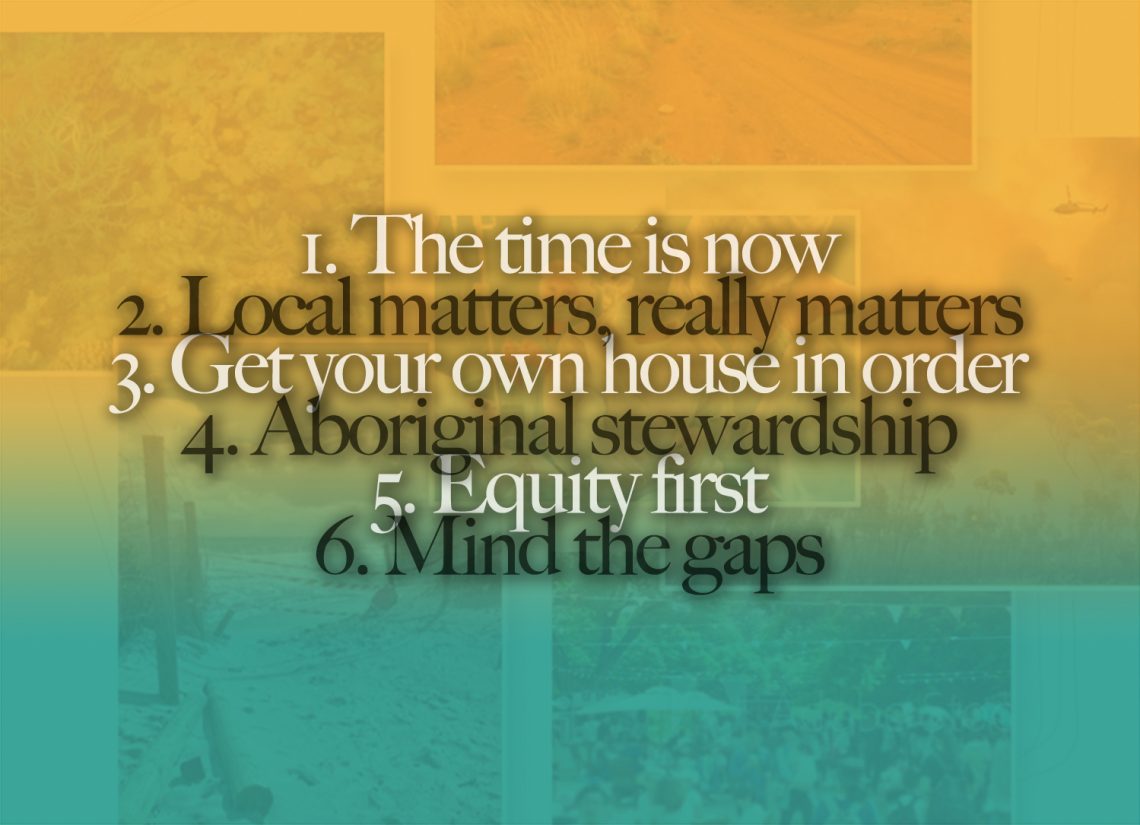 Billed as the world’s first statutory inquiry into climate and health, a new report from Western Australia makes wide-ranging recommendations for action.

The inquiry was led by Professor Tarun Weeramanthri, WA’s former chief health officer and now President of the Public Health Association of Australia and an independent consultant in public health.

After summarising the report in a long Twitter thread today, below are six key takeaways.

In case anyone needs reminding of the sorry history of climate and health inaction, the report doesn’t hold back.

“It is not unfair to label 2010–2020 a ‘lost decade’ for climate action in the health sector in Australia and Western Australia,” it says.

“This Inquiry has provided evidence of a stalling of activity in monitoring emissions and waste, in policy guidance and research funding. Other initiatives, such as in workforce training or curriculum development, are occurring too slowly to make the needed difference.

“Climate science tells us the central truth that we do not have another decade to waste.”

The report notes that the World Health Organization has been publishing reports on climate change and health since the 1990s. It has a unit dedicated to the issue, doing awareness-raising, advocacy, monitoring evidence, building capacity, and supporting countries to act.

Of the developed market nations, Australia has been recognised as being the second most vulnerable to the effects of climate change, after Israel. But the report reminds us of the Federal Government’s failure (to date) to act on a landmark 2017 report calling for a national strategy on climate and health.

In a section titled ‘History of climate and health research in Australia’, the report says that at the turn of the century, Australia was regarded as a world leader in the field, with a large research network, a National Climate Change Adaptation Research Plan for Human Health, and dedicated funding.

However, the Public Health Association Australia told the Inquiry that national funding and investment in climate and health related research has been minimal since 2012, while the report documents a static number of scientific publications on health and climate change in Australia since 2014.

As a result, Australia has failed to keep pace with international efforts in this area and “there are large gaps in knowledge about local and regional challenges as well as how we achieve change in that context”.

Writing about the report at the PHAA’s blog, Weeramanthri says the states and territories have been driving climate change policy in Australia for several years. For example, every jurisdiction in Australia, except the Commonwealth, has committed to achieving net zero emissions by 2050.

On climate and health, he says Queensland led the way, with the 2018 Human Health and Wellbeing Climate Change Adaptation Plan for Queensland. In 2019, Victoria produced a Pilot health and human services climate change adaptation action plan 2019-2021, and this year, the Northern Territory’s Climate Change Response: Towards 2050 mentions health impacts specifically. In Tasmania, a report was released from the Department of Premier and Cabinet’s Climate Change and Health Roundtable.

The report says the WA health system used to report on its greenhouse gas emissions, under an obligation of all State Government departments. This mandatory reporting stopped in the late 2000s.

“As a result, the issue was de-prioritised across the system, emissions were no longer tracked, and momentum was lost,” says the report. “After a long period of inaction, this momentum needs to be re-gained.”

The report says the inquiry’s approach was to “make hope practical, not despair convincing”.

But I don’t know how anyone could read this report without feeling some despair.

It makes clear that heatwaves, and other changing environmental conditions associated with climate change are already killing people and other species, harming ecosystems, threatening agricultural productivity, and affecting food and drinking water supplies, as well as infrastructure.

WA’s farming region has experienced the greatest decrease in productivity across the nation, with climate change cutting the state’s agricultural productivity by an average of 7.7 percent between 2000–01 and 2014.

WA’s bushfire season has expanded beyond the traditional December to February period, to run from November to May.

Rising sea levels pose significant risks to WA’s coastal infrastructure and beaches. At Hillarys, a coastal suburb north of Perth, average rate of relative sea level rise since 1993 has been 10mm per year; this is the highest rate observed in Australia and over three times the global rate.

In Fremantle, coastal flooding has increased three-fold, while parts of Perth along the Swan River including Elizabeth Quay, Heirisson Island and sections of East Perth are at risk of being submerged by early next century.

The time for action is now, and there is no more time to waste – that’s a message, suggests the report, for everyone, not only government.

The inquiry took a place-based approach, recognising the enormous regional differences within such a vast state as WA, meaning that the climate impacts also vary. Local knowledge, context and networks are vital for climate and health action.

The State’s South West is drying markedly. Since 1970, average rainfall between May and July in this region has decreased by around 20 per cent compared to the average from 1900 to 1969. Since 1999, this reduction has increased to around 26 per cent.

While the South West is expected to experience more time spent in drought, annual rainfall has increased over northern and interior WA, especially in the north-west where heavy rainfall is expected to become more intense across the north, with prolonged periods of drying in between

The report says the five principles below from WA’s Public Health Act are relevant for climate change responses – including “functions of local government in relation to public health should be acknowledged and respected”.

The map below shows how climate impacts vary across regions. 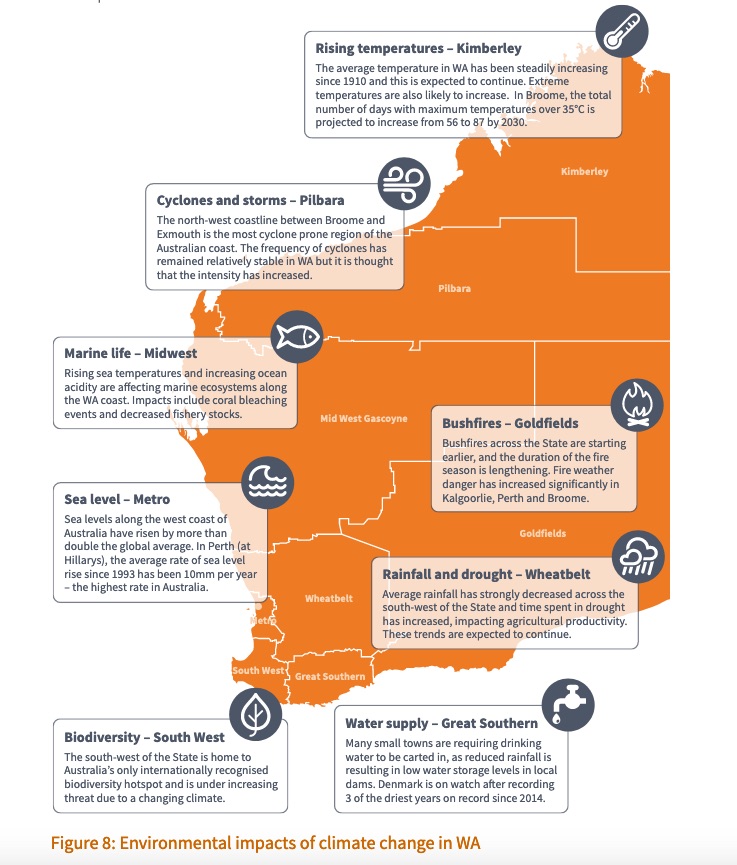 3. Get your own house in order

The report has some rather pointed words for the health sector.

It says an “Achilles heel for the health sector and health professional groups” on climate is the gap between their proessional statements and advocacy – and what the sector does to reduce its own emissions.

“Any health advocacy for action will be more compelling if the health sector is itself acting to reduce emissions under its control,” it says.

It notes “a disconnect” between health employees’ personal commitment to environmental sustainability – and whether they’re empowered to make changes. The report calls for regular reporting on the sustainability performance of health services, saying it is essential to inform decisions, engage staff, drive action, and hold system to account.

The Inquiry heard that it is critical for health to work in partnerships with other sectors including energy, environment, housing, water, transport, infrastructure, social services and all levels of government to set priorities that ensure maximum benefits for both health and climate.

But the report also reminds us how long we’ve been hearing such calls. It notes there was a focus on Health Impact Assessment in Australia’s first climate change adaptation report specific to the health sector – produced by the WA Health Department in 2008.

The report acknowledges that many Aboriginal organisations and people contributed to the inquiry’s work.

It notes that Aboriginal people have a strong history of stewardship, resilience and adaptation. Indigenous knowledge is critical to ecological science and the IPCC Global Warming of 1.5°C special report stresses the role of Indigenous peoples and local communities for climate action.

It discusses co-benefits of climate action; for example, Aboriginal-initiated natural resource management or ‘caring for country’ programs, aimed at climate adaptation, may also lead to social and emotional well-being co-benefits in remote communities.

Changes in the look and feel of country, and the loss of biodiversity are causing feelings of loss and grief. Stress and anxiety are also being felt because of difficulties maintaining culture and traditions due to changes in natural weather cycles, harsh weather conditions and/or inaccessibility to sacred sites and meeting places.

Communities are also being affected and displaced by water shortages.

The Aboriginal Health Council of WA encouraged the WA health system to ensure it is “engaging with Elders, engaging with knowledge, respecting the expertise that Aboriginal people have from the 65,000 years they’ve been on this country”.

The WA Health Department submission recommended the incorporation of Aboriginal perspectives into any evaluation framework, development of a ‘comprehensive communication strategy about climate impacts for Aboriginal people’, and the creation of meaningful partnerships.

“There is no expectation that Aboriginal people have ‘all the answers’, but their knowledge needs to be respected and their voices listened to,” the report says.

The report identifies many groups who are at increased risk from climate health impacts, including prisoners, who are particularly vulnerable to extreme temperatures, especially in older facilities.

Inspection of WA prisons by Office of the Inspector of Custodial Services recorded temperatures of up to 50°C in summer and noted that cells generally are not air-conditioned.

It’s a reminder that, as we’ve seen with the COVID-19 pandemic, addressing wider inequalities and injustices is foundational to climate responses.

If we’re talking heatwaves and prisons, surely the solution is not only about air conditioning (important though that may be) but about reducing the numbers of prisoners in the first place, and also doing much more to improve the health and healthcare of those who are in custody.

The Inquiry was told of a key gap in current emergency management system: the identification of where the more vulnerable people in our communities are, and what should be put in place to address their needs before a disaster occurs. It’s another reason that local knowledge and networks matter.

The report notes the importance of communications, and urged the WA Department of Health to consider an ongoing, multi-faceted strategy to communicate and consult with the public, stakeholders, and partners on the topic of climate change and health.

Health consumers told the inquiry about a lack of easy access to clear information on climate change, or options to reduce their own environmental footprint [again, a national climate and health strategy could have addressed these information gaps YEARS ago].

It’s interesting that the report discusses the importance of communications but doesn’t directly address the implications of the Australian media landscape for climate health action.

As reported at Croakey earlier this week, the central recommendation from the Inquiry is for a sustainable development unit to be established in the state’s Health Department, and this is part of the new Western Australian Climate Policy.

The aim of the unit is to overcome “a structural gap” in the health system’s capacity to drive mitigation activities.

It’s not clear how or when the WA Government will respond to the report’s recommendations, with WA Health Minister Roger Cook asking the Health Department to consider its findings and recommendations.

“I have asked the Department to work with health service providers to develop an implementation pathway, outlining how the recommendations can best be achieved in the short and long term,” he said in a statement.

Summary of findings and recommendations

The Climate Health WA Inquiry was an outcome of the WA Sustainable Health Review (2017-2019), whose recommendations included that there be transparent public reporting on the WA health system’s environmental footprint by July 2020. 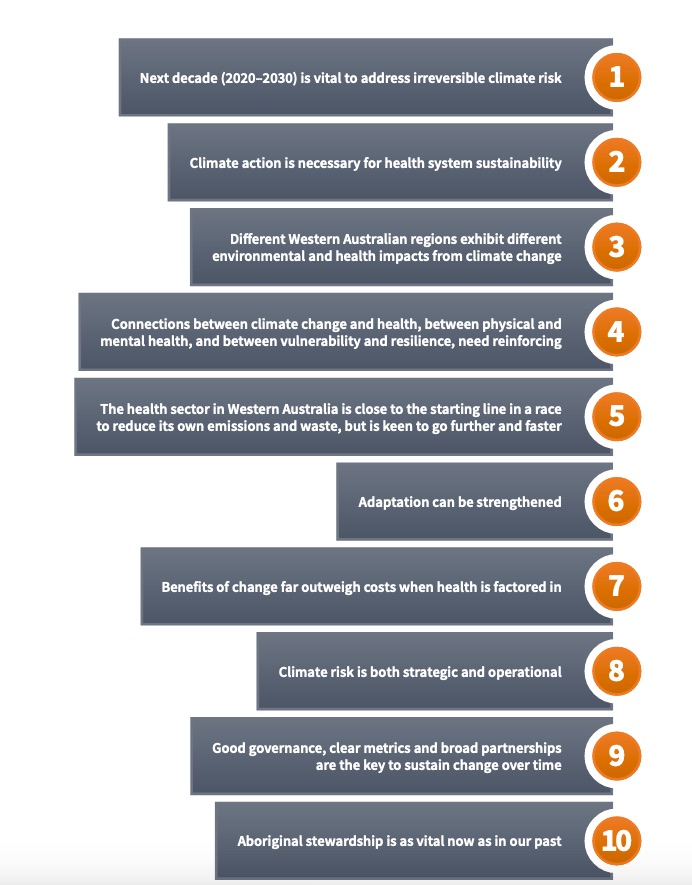 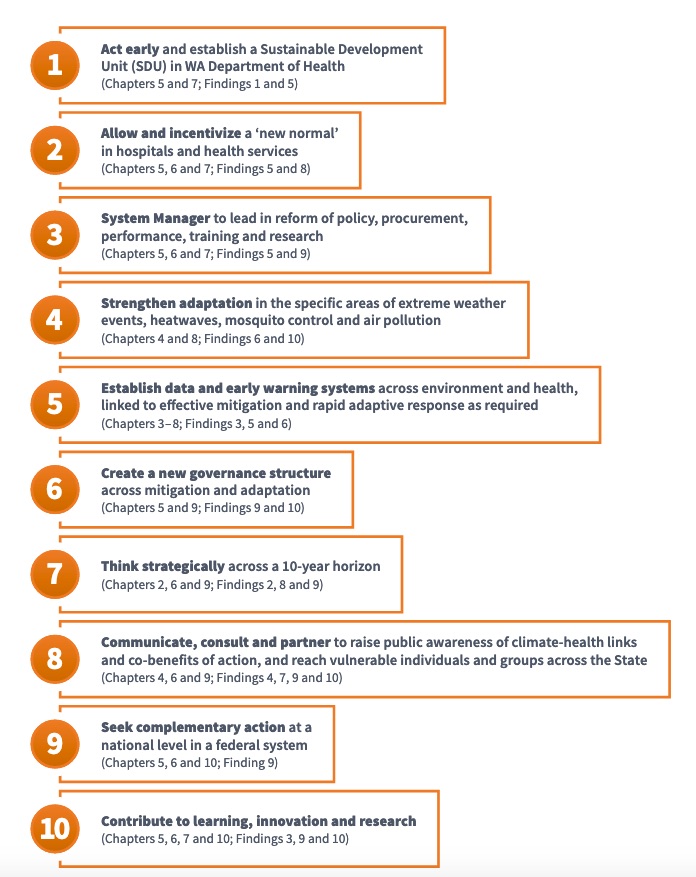