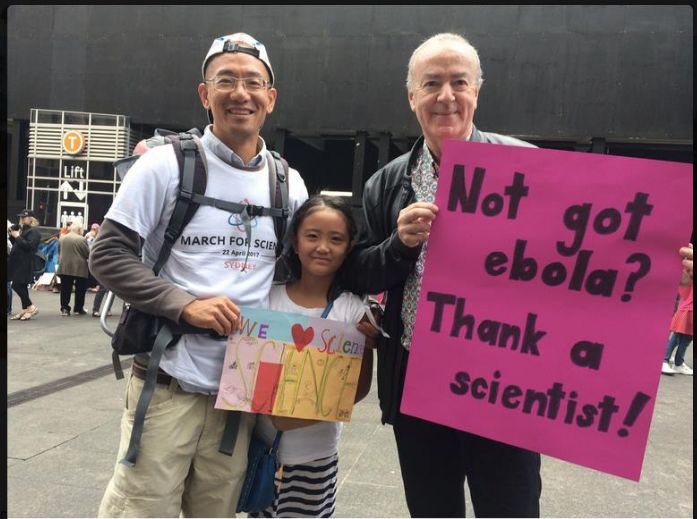 Marching for science – as well as planetary and public health

*** This post was updated on 24 April with more links and photos, and a credit to the photographer for the feature image, Nicky Phillips (thanks Nicky!) ***

Many thousands of people in hundreds of cities and other places around the world (including Antarctica and at least one underwater demonstration as per the tweet below) marched for science over the weekend. 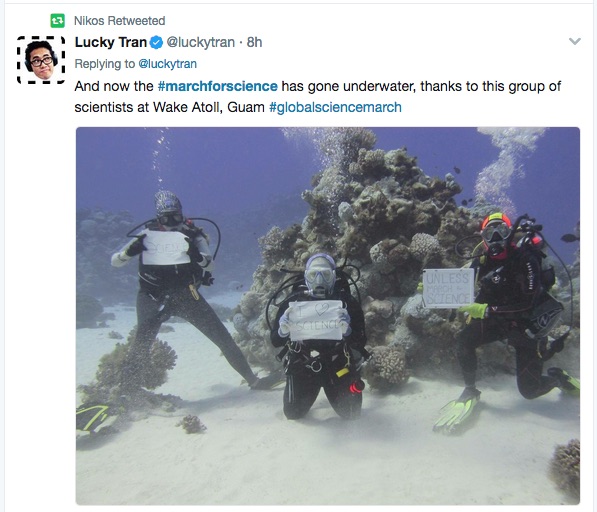 The crowds prompted one headline in the United States to declare: Marches for Science Outdraw Donald Trump’s inauguration.

Not surprisingly, public health advocates were among those out in force.

Below is a speech delivered by Emeritus Professor Simon Chapman at the march in Sydney, which he says drew a crowd of between two and three thousand people.

This speech, urging researchers and scientists to “stand up for science, and the future of sustainable life on our planet,” was first published at The Conversation.

In another #MarchForScience speech also published by The Conversation, Laureate Professor Peter Doherty says that US President Trump’s attacks on science are a major threat to the global culture of science.

Since their speeches were first published, Nationals deputy leader Fiona Nash is reported to have joined her cabinet colleague  Attorney-General George Brandis in claiming the science of climate change is not yet settled.

Beneath Chapman’s article are details of a statement by Indigenous scientists.

In the early 16th century Copernicus published his book De revolutionibus orbium coelestium (On the Revolutions of the Celestial Spheres). He greatly accelerated the end of Ptolemaic astronomy, which had placed the earth at the centre of our universe.

Over the next 100 years Kepler, Tycho Brahe, Galileo and Isaac Newton added their observations and completed the Copernican revolution. During that time, the Roman Catholic Inquisition tried Galileo and put him under house arrest for the rest of his life for his heresy that the earth moved around the sun. The science had nothing to do with it. His conclusion was just unacceptable to those in power.

Some 500 years later, we see the new Inquisitor Trump in charge of the world’s most powerful nation.

In the US, direct political interference with science is not new. Gun control research has been gutted since 1996 when lobbying by the National Rifle Association succeeded in outlawing most firearm research by the Centers for Disease Control.

In his first week, he issued orders gagging scientists and other staff in the Environmental Protection Agency and the departments of agriculture, and health and human Services from speaking with the media and so to the American public.

Is there any scientist who doesn’t expect Trump to soon put conditions on the funding of state universities to weed out science that might hinder his ambitions?

Oh wait. He’s already begun. The National Institutes of Health budget is getting an 18% funding haircut; the global health icon the Fogarty International Center is going. Over 400 scientists in US universities were funded by Fogarty.

Many Australian researchers have colleagues living in Trump’s America whose entire careers are facing collapse.

Trump’s pick Scott Pruitt – the one who has sued the Environmental Protection Agency 13 times and now runs it – is taking a wrecking ball to the agency he clearly loathes.

The Clean Water Rule is being shredded, allowing mines and factories to pollute rivers.

US Vice-President Mike Pence, who’s in Australia on the weekend, wants religion taught in school science classes and is on the record as saying:

Despite the hysteria from the political class and the media, smoking doesn’t kill. In fact, two out of every three smokers does not die from a smoking related illness.

By this logic, Ebola, smallpox and plague aren’t deadly either, because not all who get these disease die.

It’s happening in Australia too

Recent attacks on science in Australia have been mostly about climate science. But they have gone beyond that.

Since 2012, we have had not one, not two, but three Senate enquires into the non-disease of wind turbine syndrome. The National Health and Medical Research Council was pressured to quarantine funds to investigate this nonsense. Then the Wind Farm Commissioner needed to negotiate the resolution of just two complaints in 14 months.

If we elect clowns, we should expect a circus.

The Australian Academy of Science disappointingly declined to endorse this weekend’s march. It says in an email to the march organisers that Australia is not like the USA, and science should not be politicised.

But hello? Science is being politicised. Australian politicians are attacking it, seeking to weaken areas that threaten ideologies of untrammelled growth and short-term profits.

Speak up, loudly and often

Early in my career, I heard US activist Ralph Nader speak at the Sydney Town Hall. His theme was that, as citizens, we all should have a duty to do something for our communities. I’ve tried to do that for the past 40 years. There’s not a scientist here today who doesn’t hope their work will contribute toward the well-being of the planet and all who live on it.

But too many of us are far too shy about telling the world about our work. Attacks on science will continue, supported by deep pockets.

These people will have their work cut out if scientists make it their duty to also explain their work and advocate for policies based on the evidence they help produce.

For every scientist and researcher, here’s my suggestion. At least once a month, make it your goal to write something for the public, be interviewed, speak to a community group, lobby your local member. Stand up for science, and the future of sustainable life on our planet.

Simon Chapman delivered this speech at the March for Science rally in Martin Place, Sydney, at noon on Saturday, April 22, 2017.

• First published at The Conversation: Why I’m supporting Saturday’s march for science

• See the ABC report, with photos 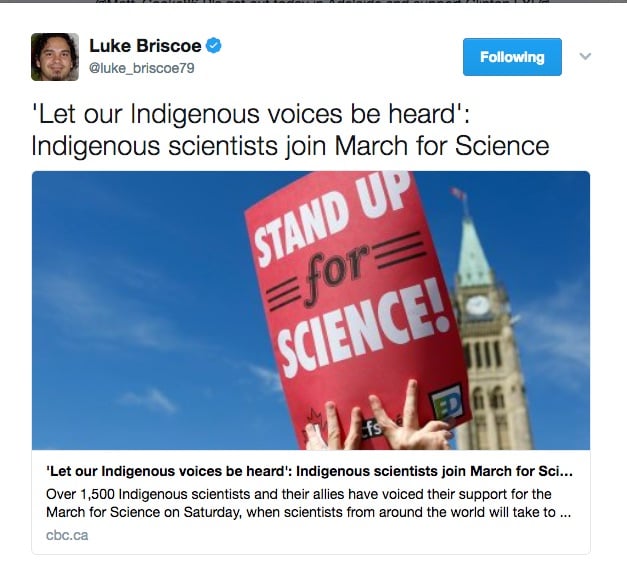 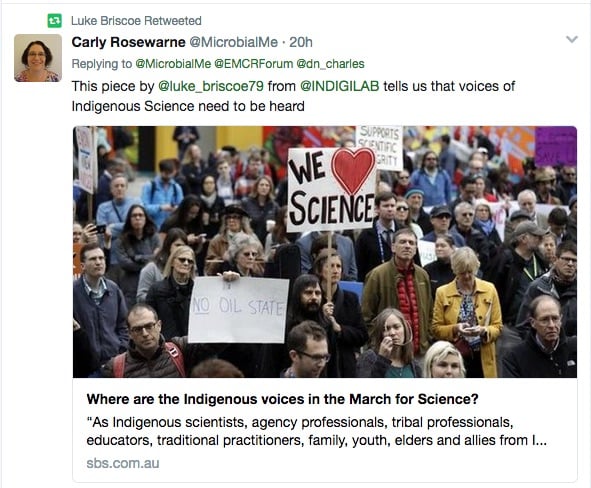 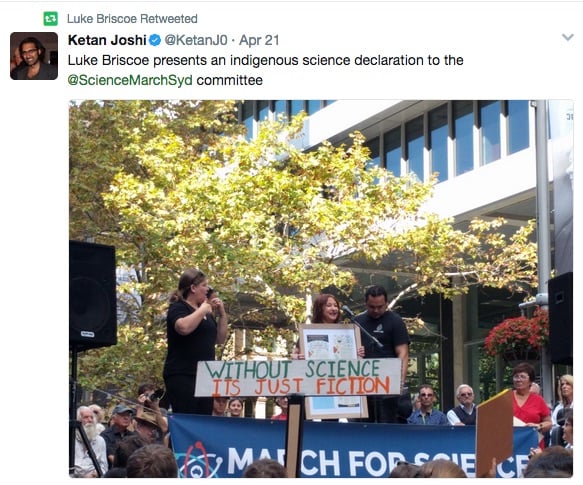 PrevPreviousAn invitation to Croakey readers and contributors – please join us for a walk and talk
NextWhat’s coming up at the National Rural Health Conference in Cairns this week?Next