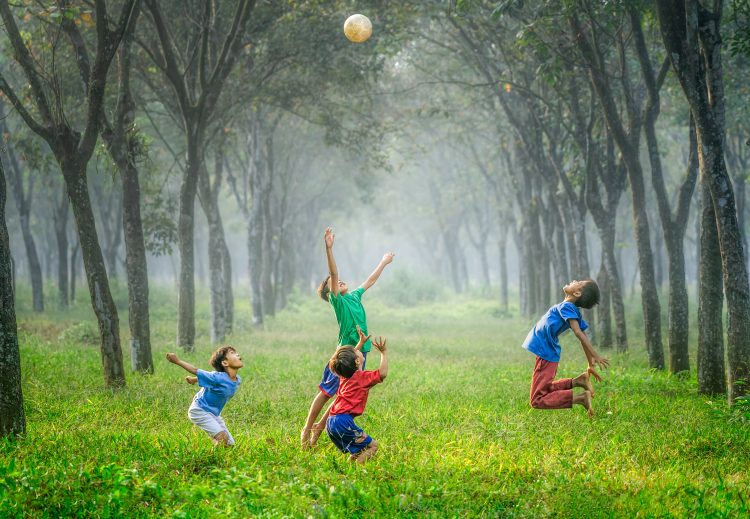 Equity, tackling stigma and discrimination, and addressing the wider determinants of health and sustainability have been placed at the centre of Australia’s long-awaited National Obesity Strategy, which aims to halt and reverse the issue by 2030 with a particular focus on childhood and prevention.

The Strategy, which was published on World Obesity Day, aims to reduce overweight and obesity in children and adolescents by five percent and halt and reverse the trajectory in adults by 2030, so that individual, health and economic costs and deaths, hospitalisations and burden of disease are eased.

It estimates the cost of obesity to the Australian community at $11.8 billion in 2018 and says this could reach $87.7 billion in the next decade without concerted action.

With the guiding principles of fostering equity, tackling weight stigma and discrimination, addressing the wider determinants of health and sustainability and empowering personal responsibility to enable healthy living, the Strategy has three overriding ambitions, with a host of imperatives and suggested actions beneath each:

Unveiling the long-awaited Strategy, which has been several years in the making, Health Minister Greg Hunt said it recognised that obesity is a complex health condition influenced by social, environmental and economic factors.

“Our primary focus is on prevention and the factors which contribute to this major health issue. It will also support the 14 million Australians living with being overweight or obesity, to live a healthier life,” Hunt said. 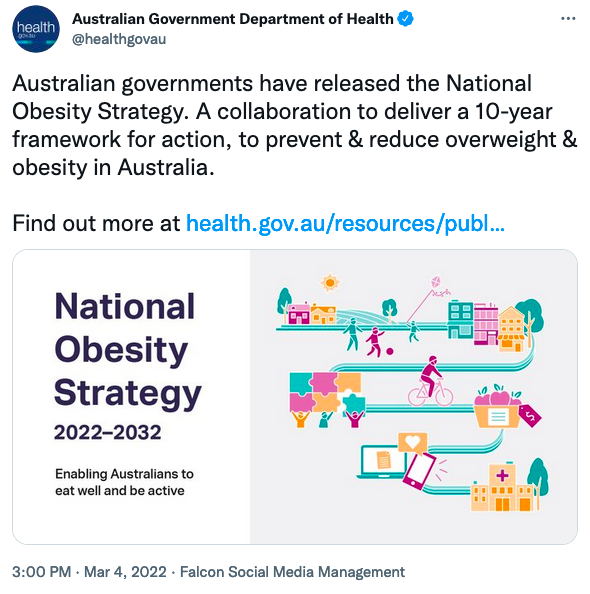 Queensland’s Department of Health was the lead agency in the Strategy’s development, and its local implementation will be led by Health and Wellbeing Queensland.

Dr Robyn Littlewood is chief executive of Health and Wellbeing Queensland, and she described the Strategy as an “unprecedented opportunity” to shift the state’s growing obesity trend.

“We are committed to providing programs and putting into place various policies and initiatives which will help to tackle environmental influences which can increase the likelihood of obesity in Queensland,” Dr Littlewood said.

“There is no overnight solution to tackling the causes of obesity, however the Strategy will be critical to ensure we lead the way forward for all Queenslanders.”

The Obesity Policy Coalition welcomed the Strategy’s release as an important first step toward improving Australia’s food environments and supporting healthier living, urging it to be matched with concrete policy action “sooner rather than later, by all levels of government”.

“It sets the foundation for broad changes to the way food is produced, promoted, priced and sold in Australia, as well as changes to our physical environment,” said OPC executive manager Jane Martin.

“It also recognises the broad determinants of health that are beyond an individual’s control and extend beyond the health system. These systems changes are what we know is needed to protect and support the future health of Australians.”

Martin said the Strategy identified a number of areas which needed priority action, including exposure of children to marketing of unhealthy food and drinks, a health levy on the makers of sugary beverages, and improved food labelling to identify added sugars.

Unhealthy food and drinks make up over a third of the daily energy intake for adults and even more for some children. This isn’t surprising when the processed food industry spends millions of dollars every year targeting Australian children in all aspects of their lives – airing three food ads every hour in children’s peak TV viewing times and exposing children to almost 100 online promotions for unhealthy food every week. We need to see urgent action to protect children and their health from this constant exposure to unhealthy messaging.”

However, Martin also cautioned against placing too much of the onus on individuals when “fundamentally we need to see broad, system-wide changes put in place to make it easy for Australians to live healthy, happy lives”.

VicHealth said the Strategy was “long overdue” and should be met with urgent action “without defaulting to individual responsibility”.

It said the COVID-19 pandemic had “exacerbated the number of families fighting an uphill battle to put food on the table. They are often left with no option but to turn to cheap and unhealthy food.”

The health promotion agency said the Strategy put too much of the onus on individuals “who are up against an industry that spends more than $550 million peddling their products through advertising”.

“A national strategy addressing the unhealthy environments that lead to obesity is a promising step forward. While reducing weight stigma can lead to a more inclusive society, pushing the onus back onto everyday Australians and relying on behaviour change is simply not going to move the needle.”

Demaio said a systematic approach to prevention was needed which “put our people over industry profits” and protected children from the “predatory tactics” of food and drink companies.

Released on the same day as the National Obesity Strategy was Tasmania’s Healthy Tasmania Five-Year Strategic Plan, which centres prevention and has climate change and health as a new focus area.

“We know prevention of disease promotes physical and mental health and wellbeing, increases participation in the community, and is not only good for the individual but our whole State,” said Tasmanian Premier Peter Gutwein.

The plan recognises a range of health determinants including social, economic, cultural, structural and environmental drivers, as well as digital and commercial. It is framed by the principles of equity, empowerment and sustainability.

The plan says Tasmania is forecast to experience rising temperatures, more storms, longer fire seasons, more hot days and heatwaves, and changes in rainfall patterns, all of which “have implications for the health of Tasmanians”.

In order to meet this challenge the plan commits to reducing emissions from food and energy production, curtailing air and waste pollution and increasing active transport, as well as improving access to Tasmania’s natural environments and creation of more liveable, connected spaces.

“Acting on climate change will result in immediate and direct benefits for the health of Tasmanians now as well as for future generations. These actions will reduce the risk factors for chronic disease and improve the liveability of our communities,” it says. 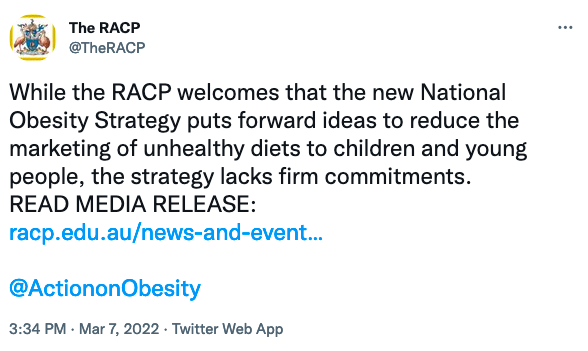 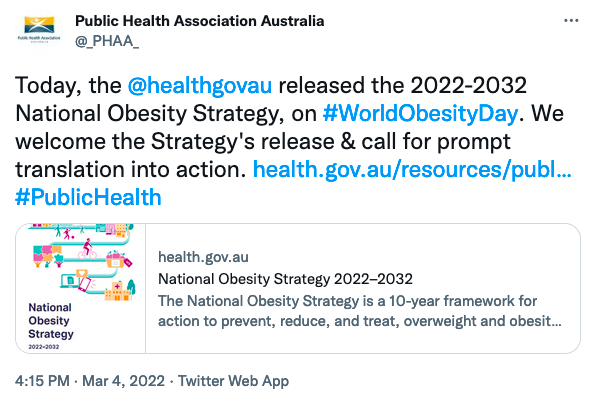 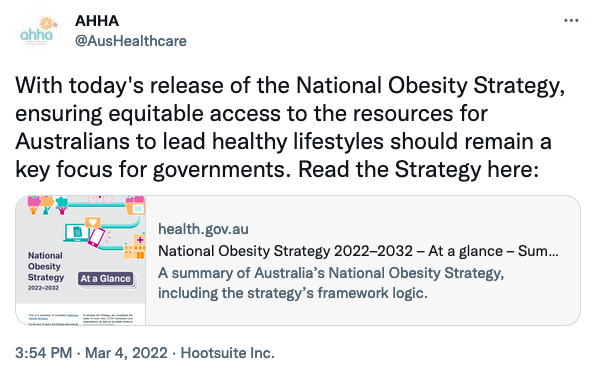 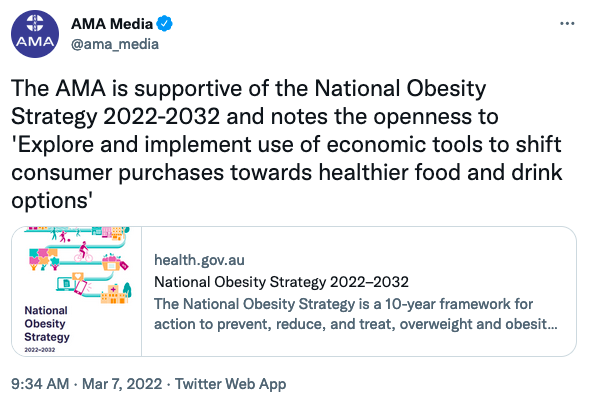 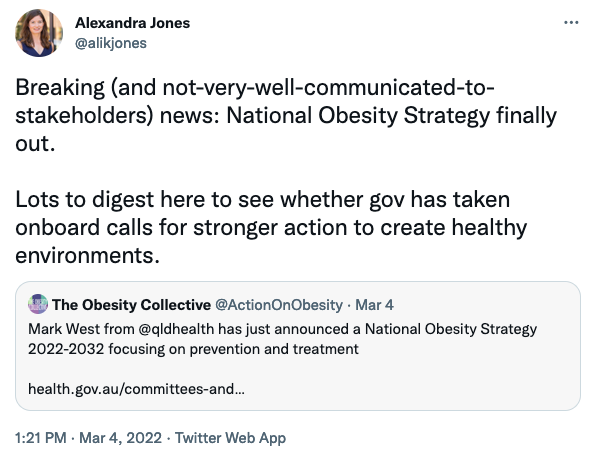 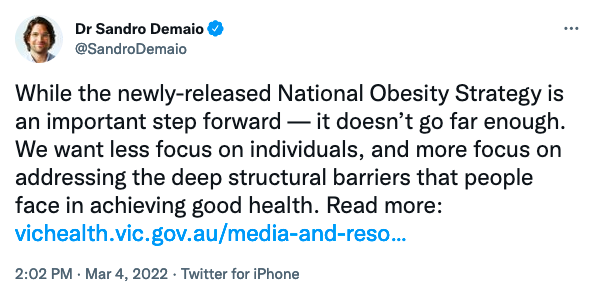 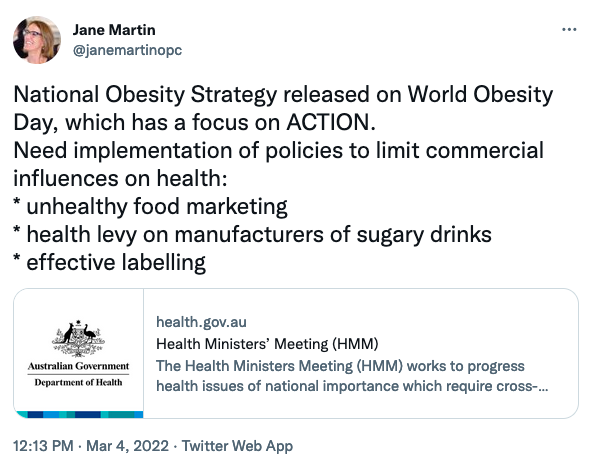 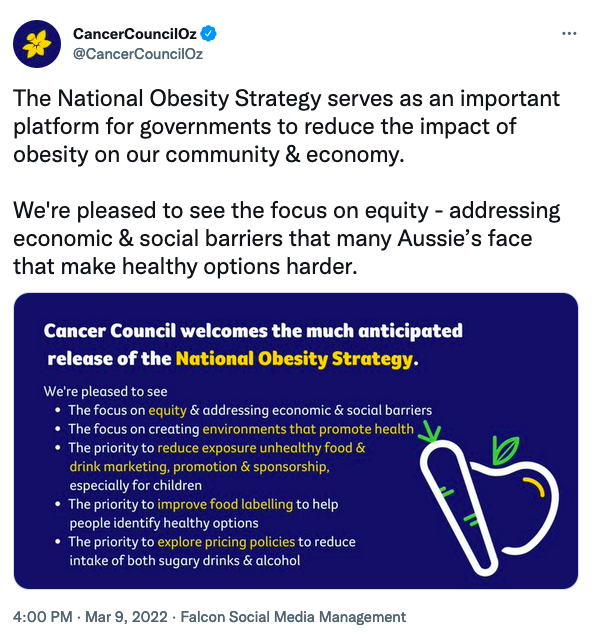 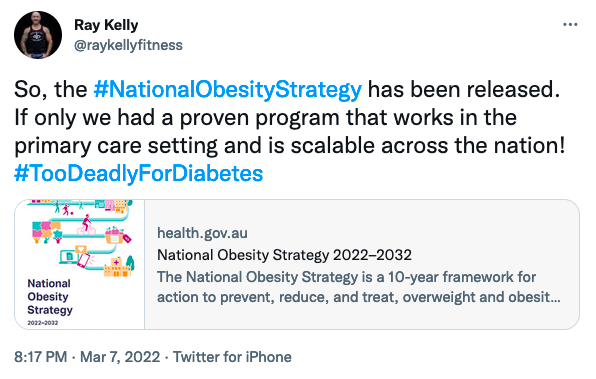 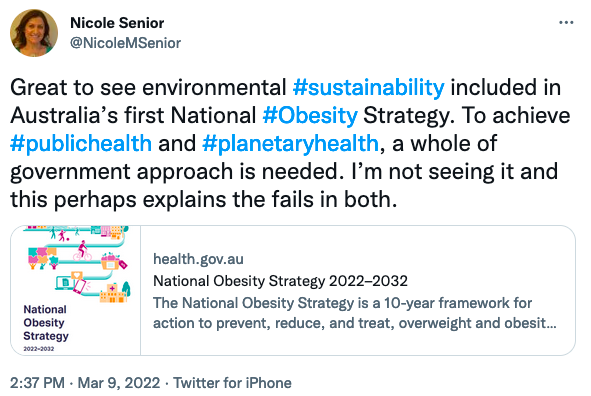 See Croakey’s archive of articles on obesity and health.