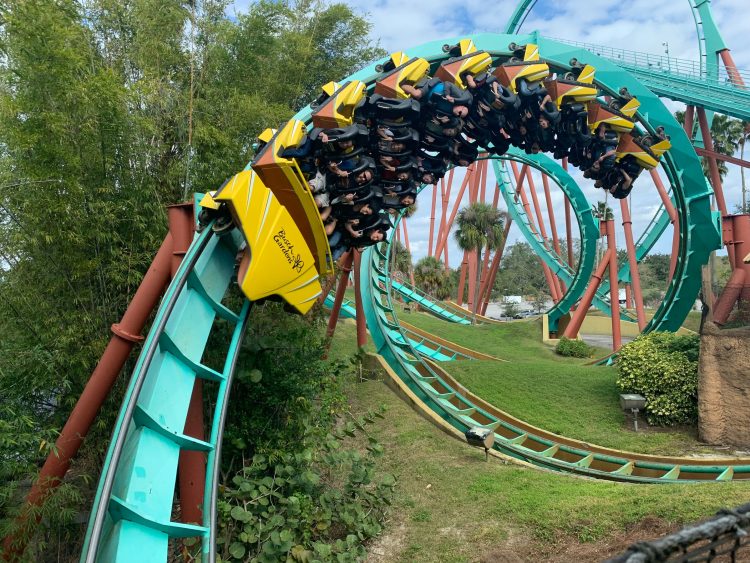 A roller coaster ride through climate and health threats and solutions. Photo by Stephen Hateley on Unsplash

For those unable to join the recent conference of Doctors for the Environment Australia (DEA), we have compiled this summary based on the tweets from DEA and others.

Amongst other things, it is a reminder of the yawning gap between mainstream political debate and discussions informed by medical and scientific evidence. 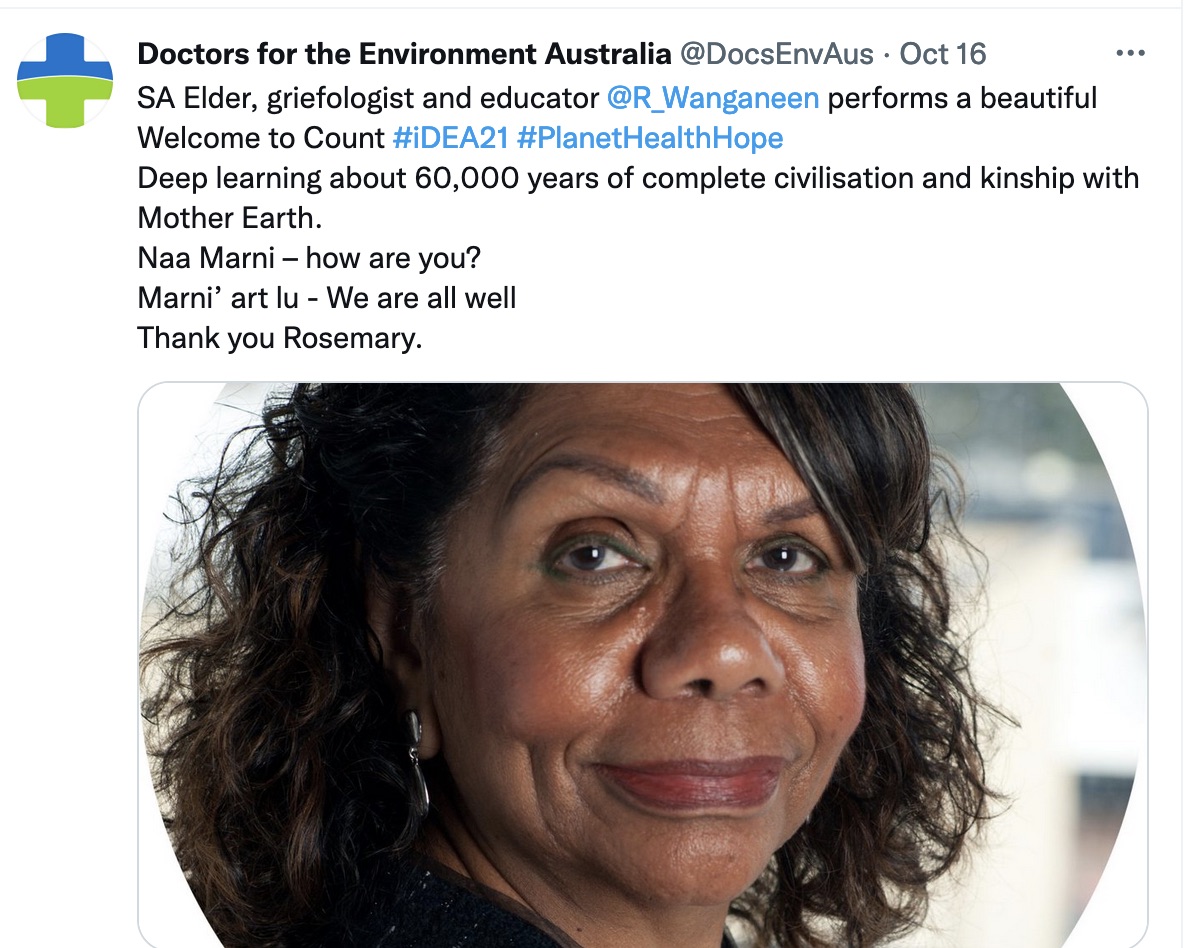 Professor Will Steffen from the Climate Council spoke on “Aim High, Go Fast”, examining the current state of the climate crisis and the need for urgent action 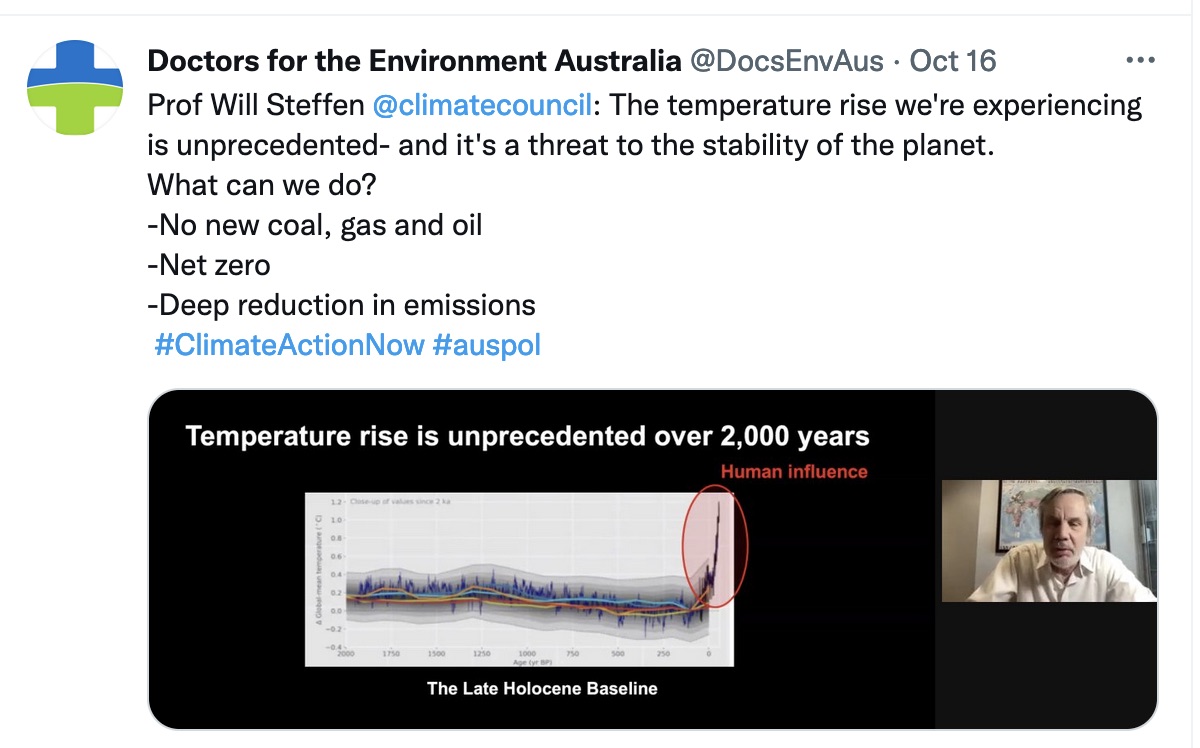 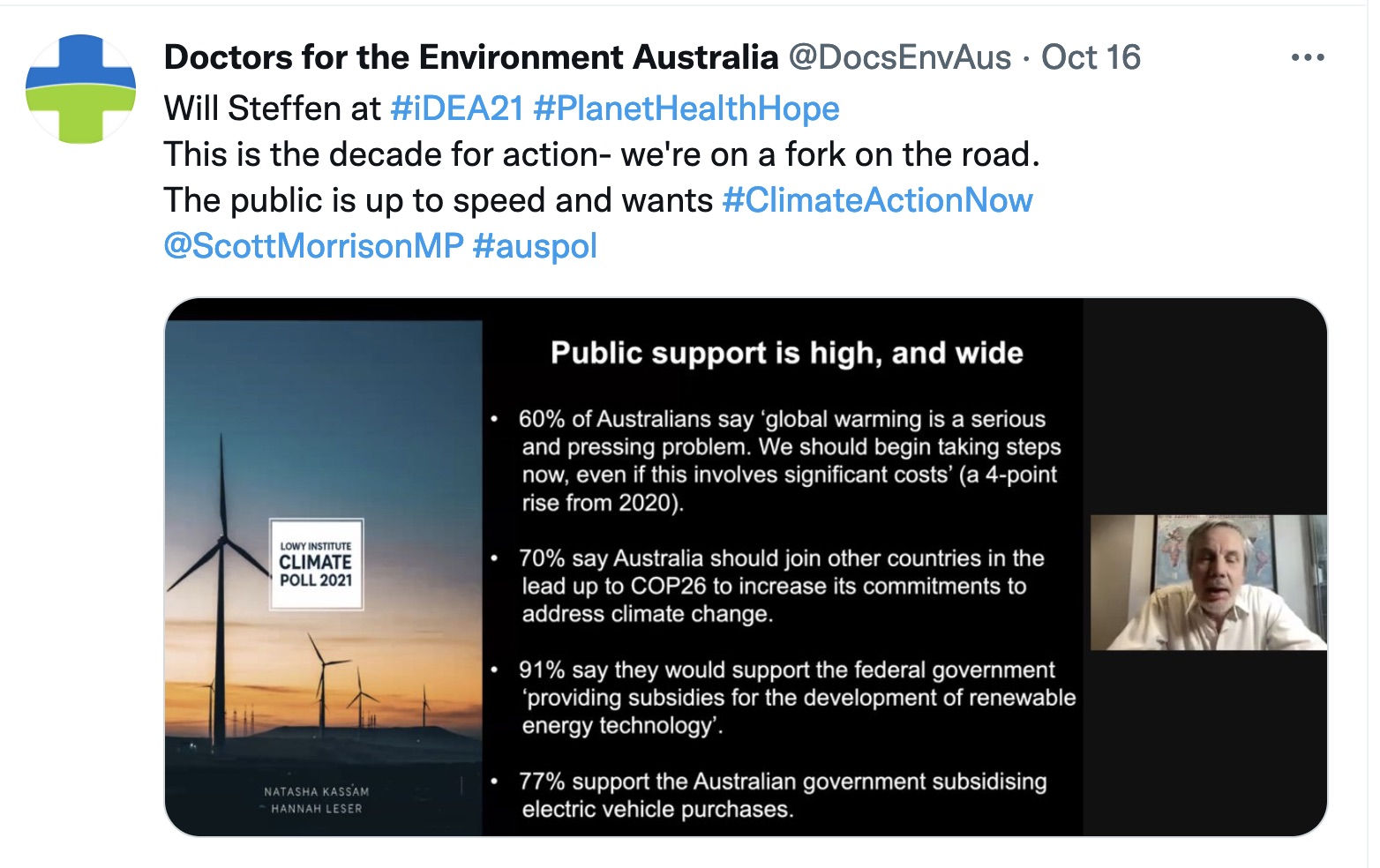 The bottom line: keep global temperature to 1.5 degrees in line with the Paris Agreement. Restore and manage nature and biodiversity. Agriculture has a huge role in restoring the biosphere. We can learn from Indigenous knowledge. 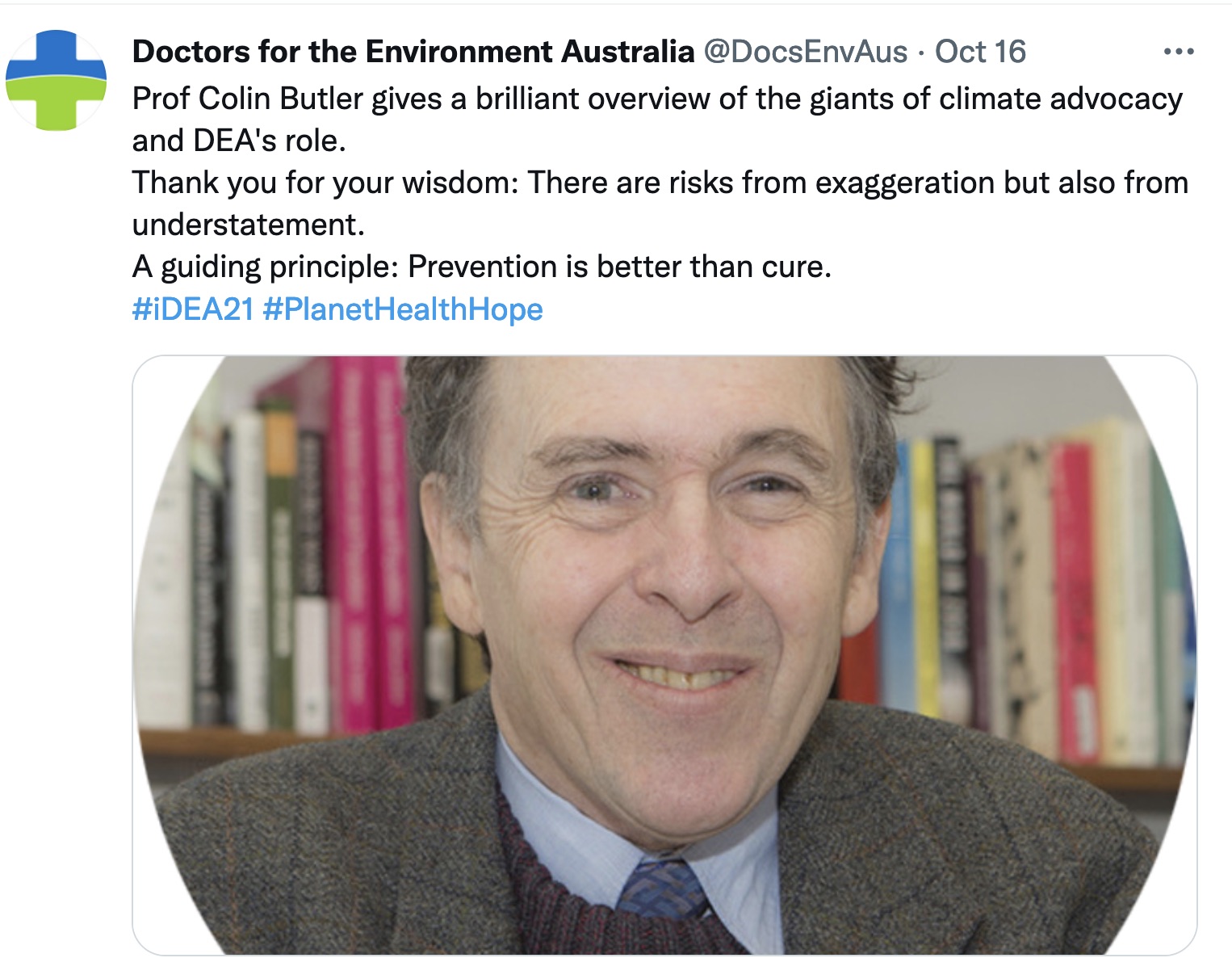 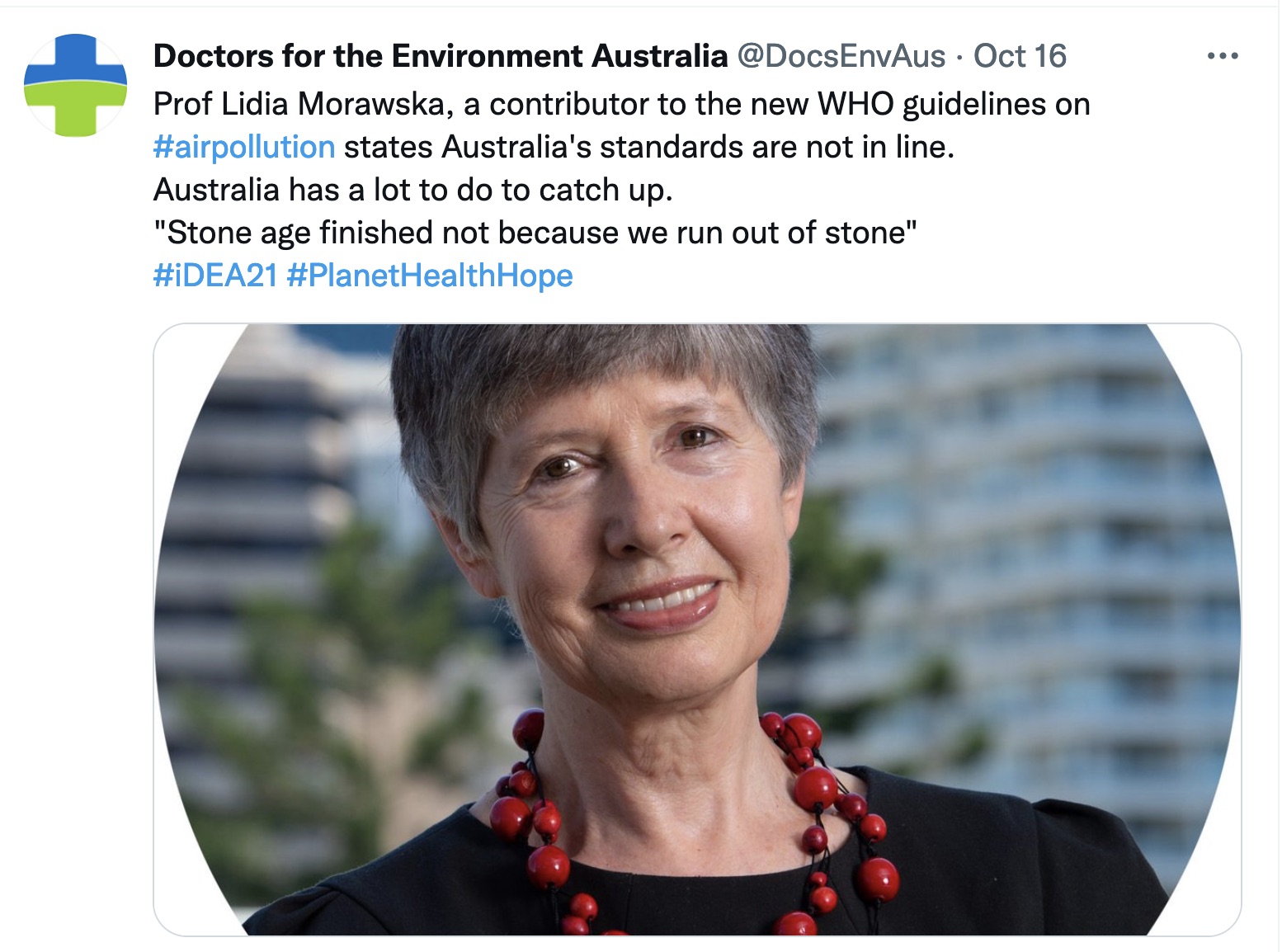 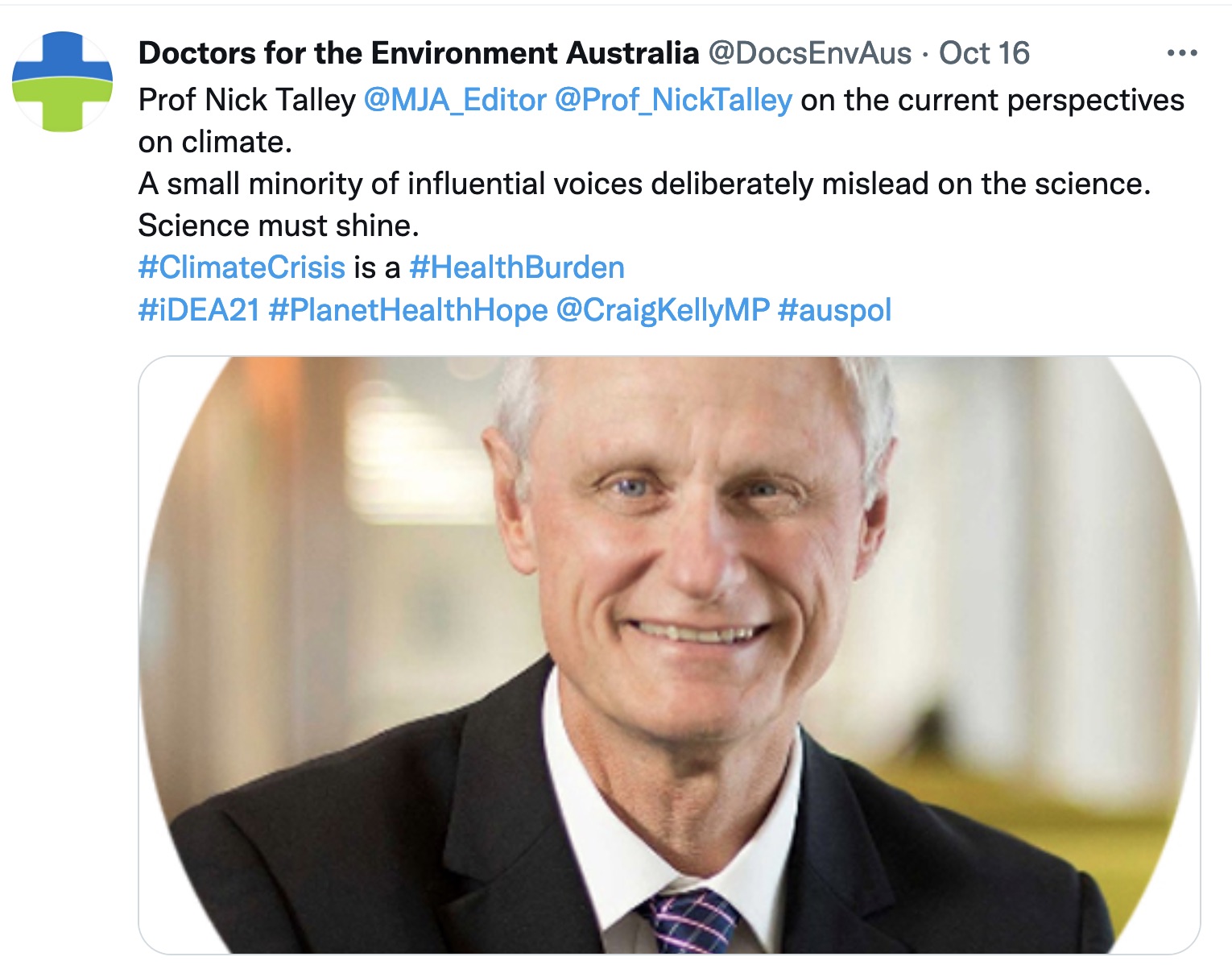 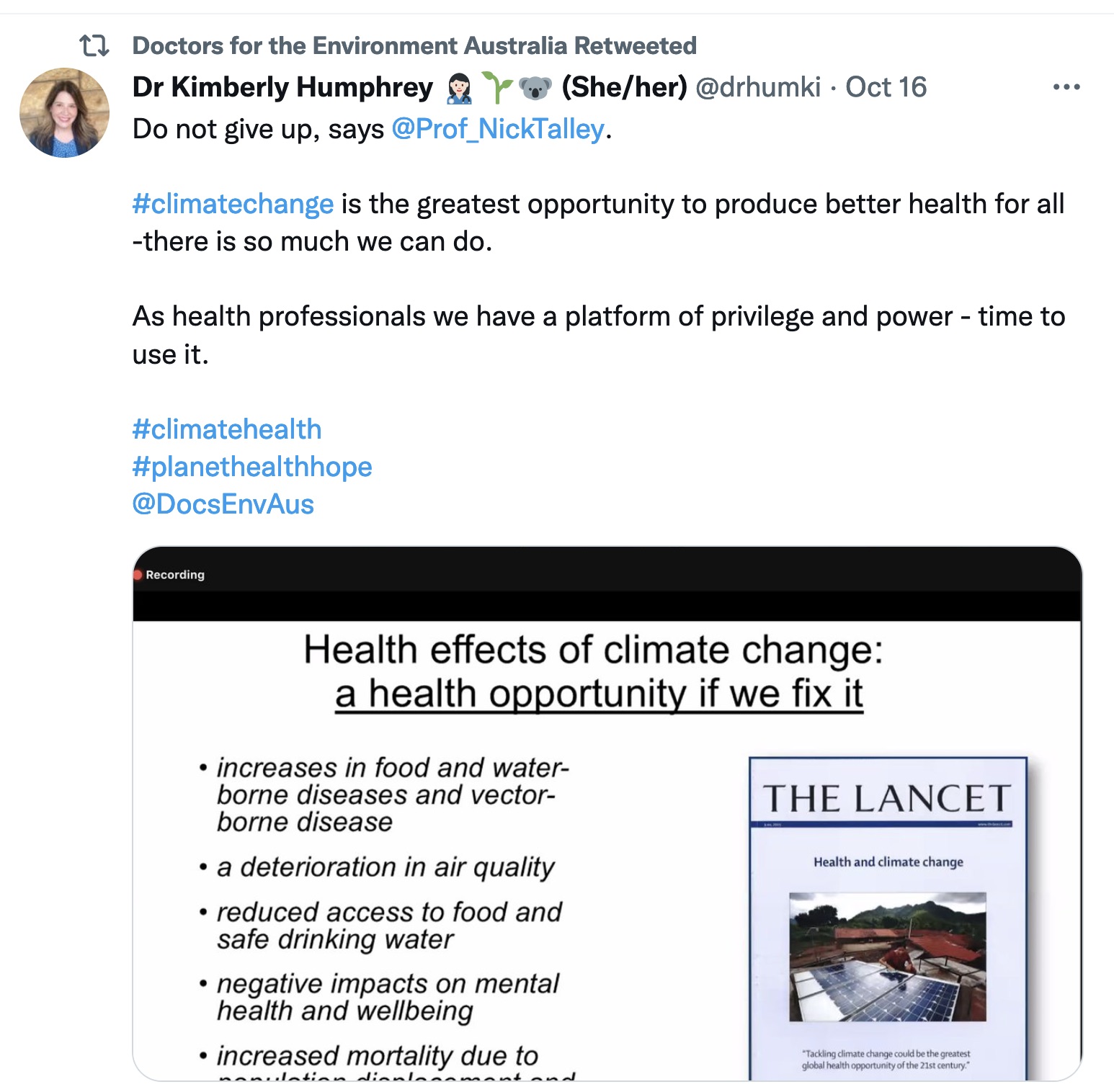 Professor Nick Talley told the conference that the tide is turning and that business and the public are rapidly getting on board with the need for climate action. The laggards? It’s politicians – and we need to push for climate health action.

We’re at a cross road. We have an opportunity to step up to climate change and the health sector has a major role to play. Let’s stop talking and get on to doing – like the @GreenerNHS.

He said Dr Jennifer Martin (@jenhelenmar) led by example by speaking out against Mark Vaile’s appointment as chancellor at the University of Newcastle, leading to his resignation. Never Ever Ever Give Up! 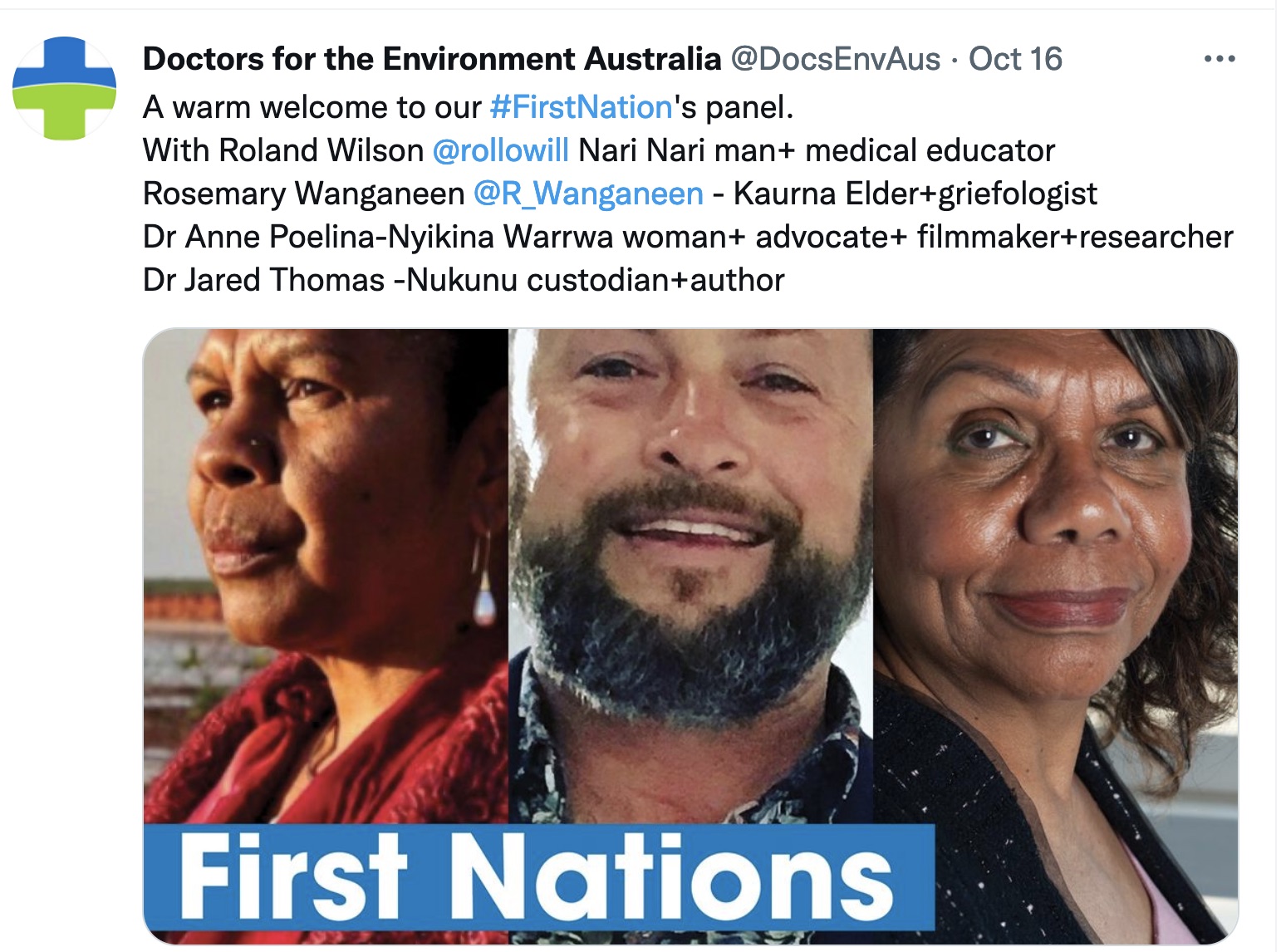 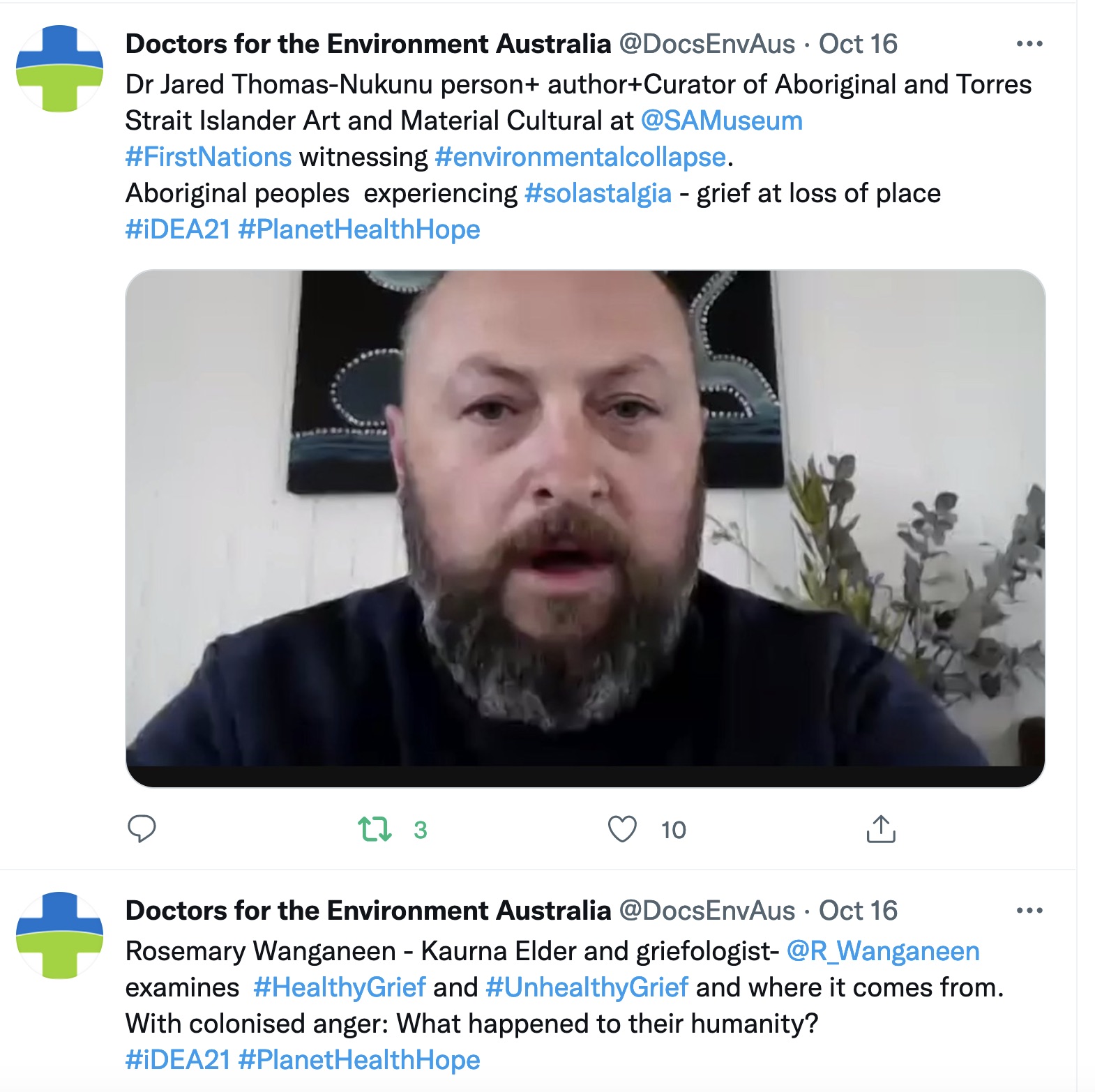 When we look after ecosystems, they come back. Doctors have an incredible role to play – treat not just the patient but be cognisant of Healthy Country Healthy People: Dr Jared Thomas. 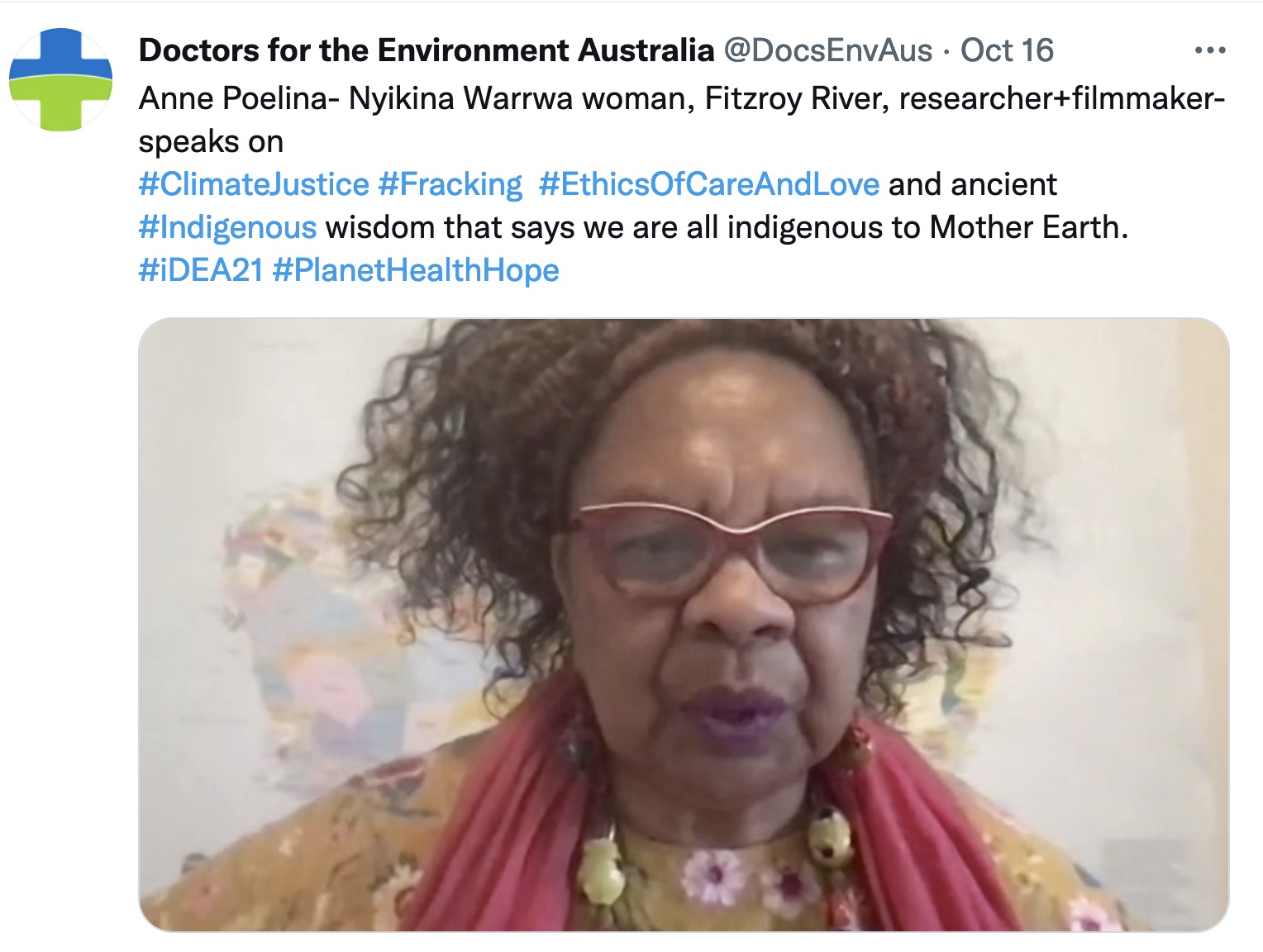 Indigenous people come from a world of We and not Me, and it’s time for all of us to wake up to planetary health ethics of care. From a conference tweep: Thank you for your insights and teachings Dr Anne Poelina – compelling words in a time of climate crisis and rights of Country. 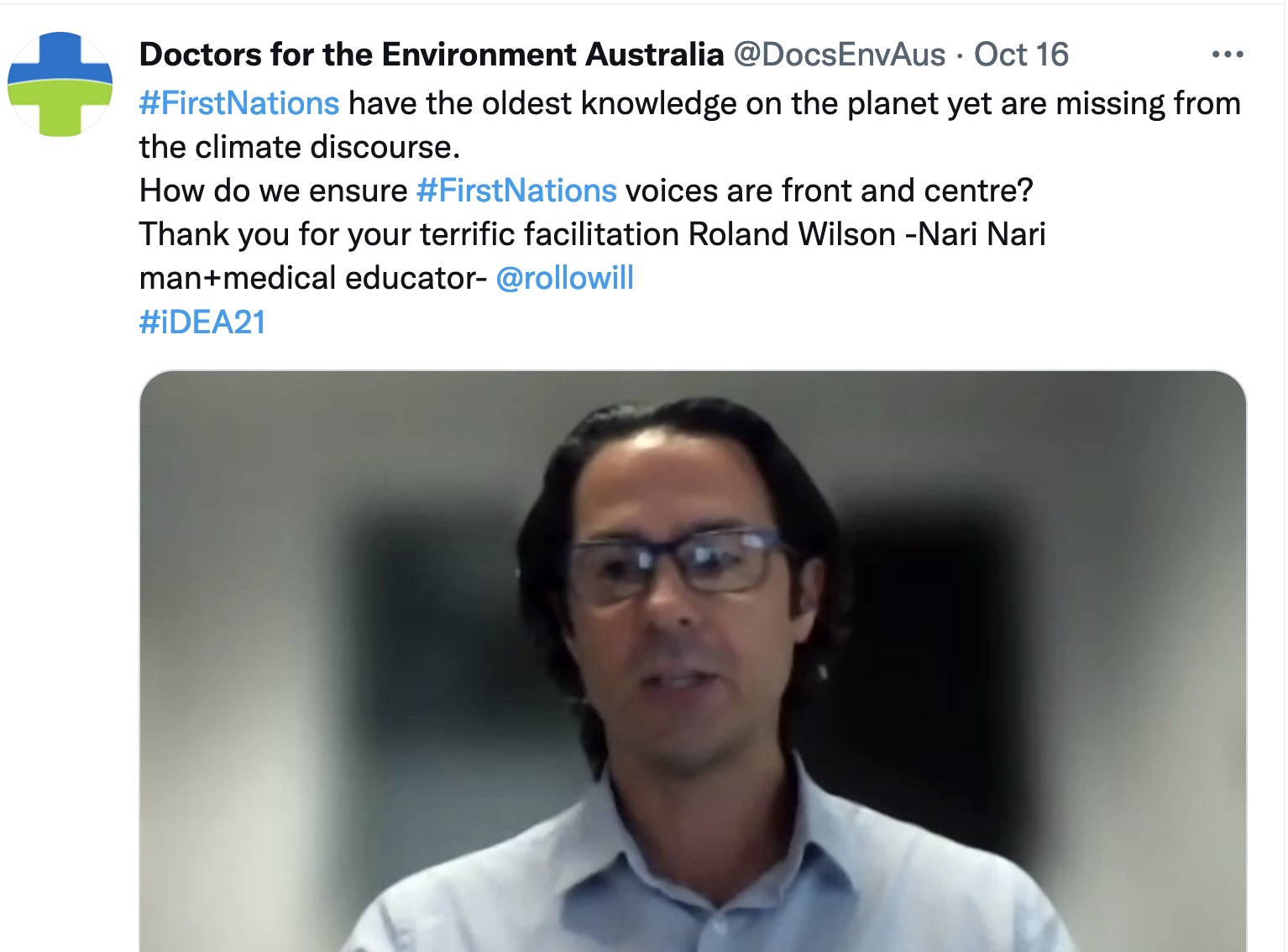 Rivers are life: Dr Kate McBride from the Australia Institute spoke on the plight of the Murray Darling Basin. 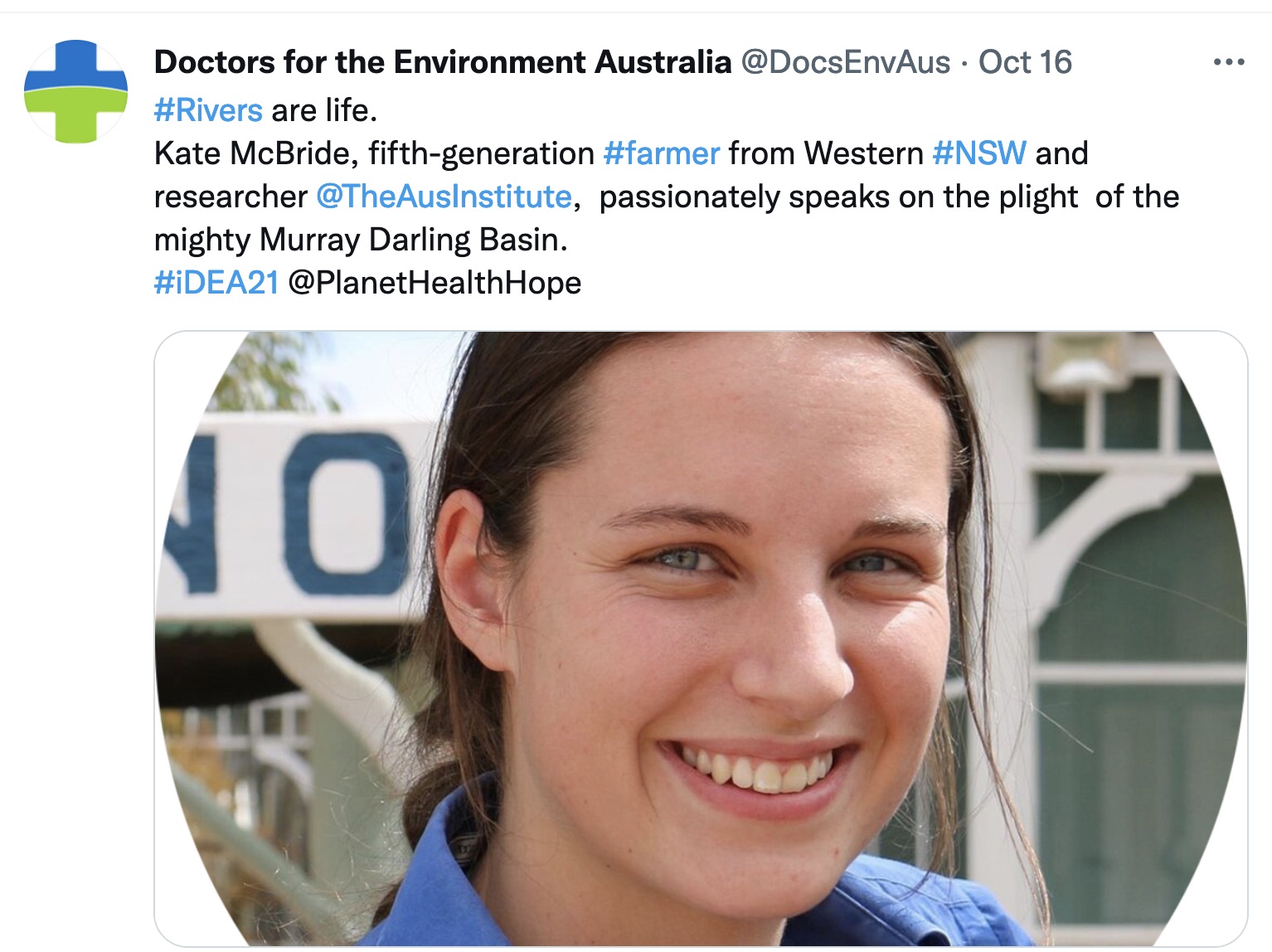 DEA tweeted from Dr McBride’s presentation: Dead rivers, fish kills. This is not normal. Politicians are not managing the water appropriately. First Nations management is key to  Healthy River Healthy People. Water is life. Putting the environment before politics and respecting cultural flows in the Murray Darling Basin is vital. 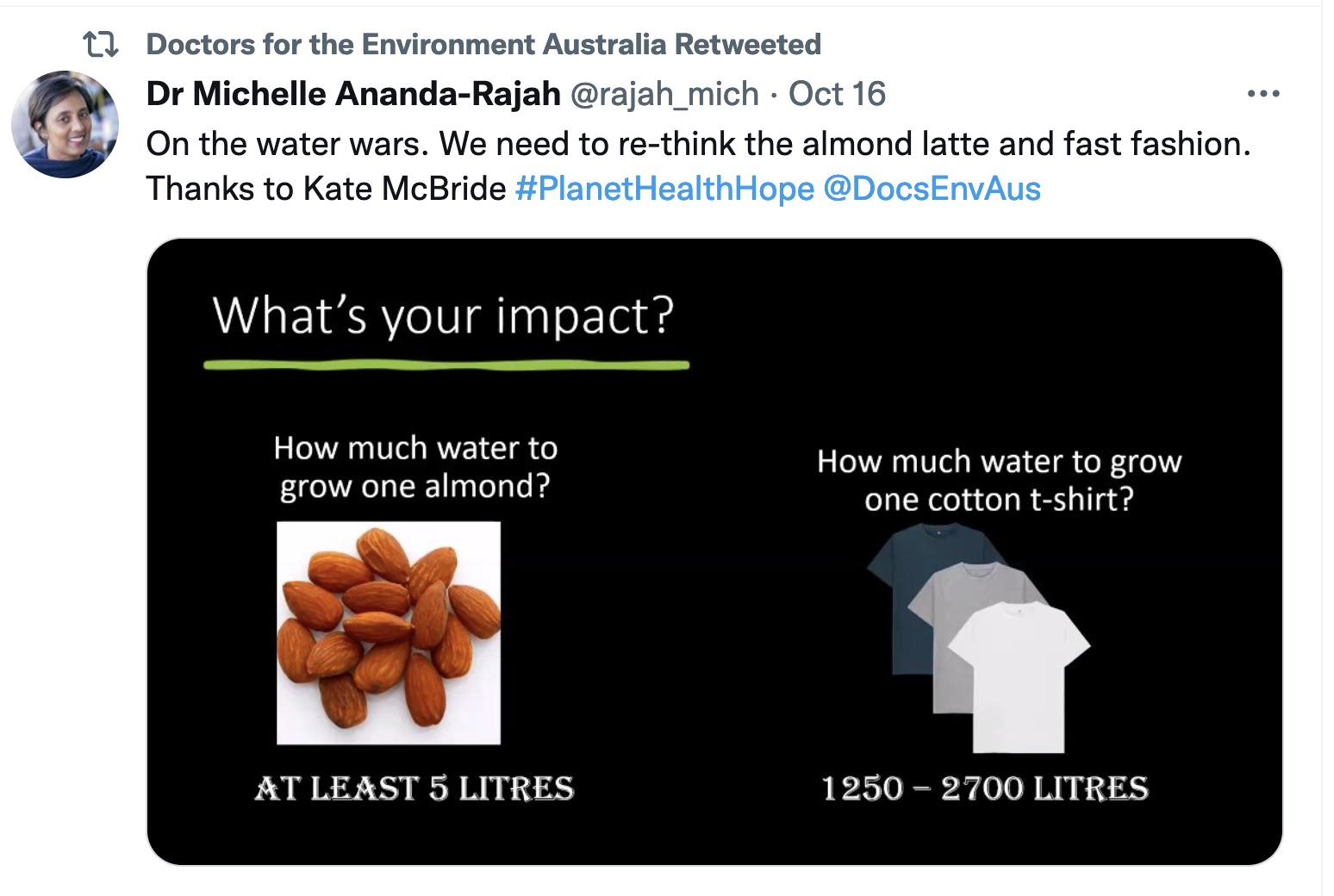 Dr Brian Von Herzen from The Climate Foundation spoke on rgenerating life in the oceans, through marine permaculture, as a win/win/win for oceans, people and jobs. 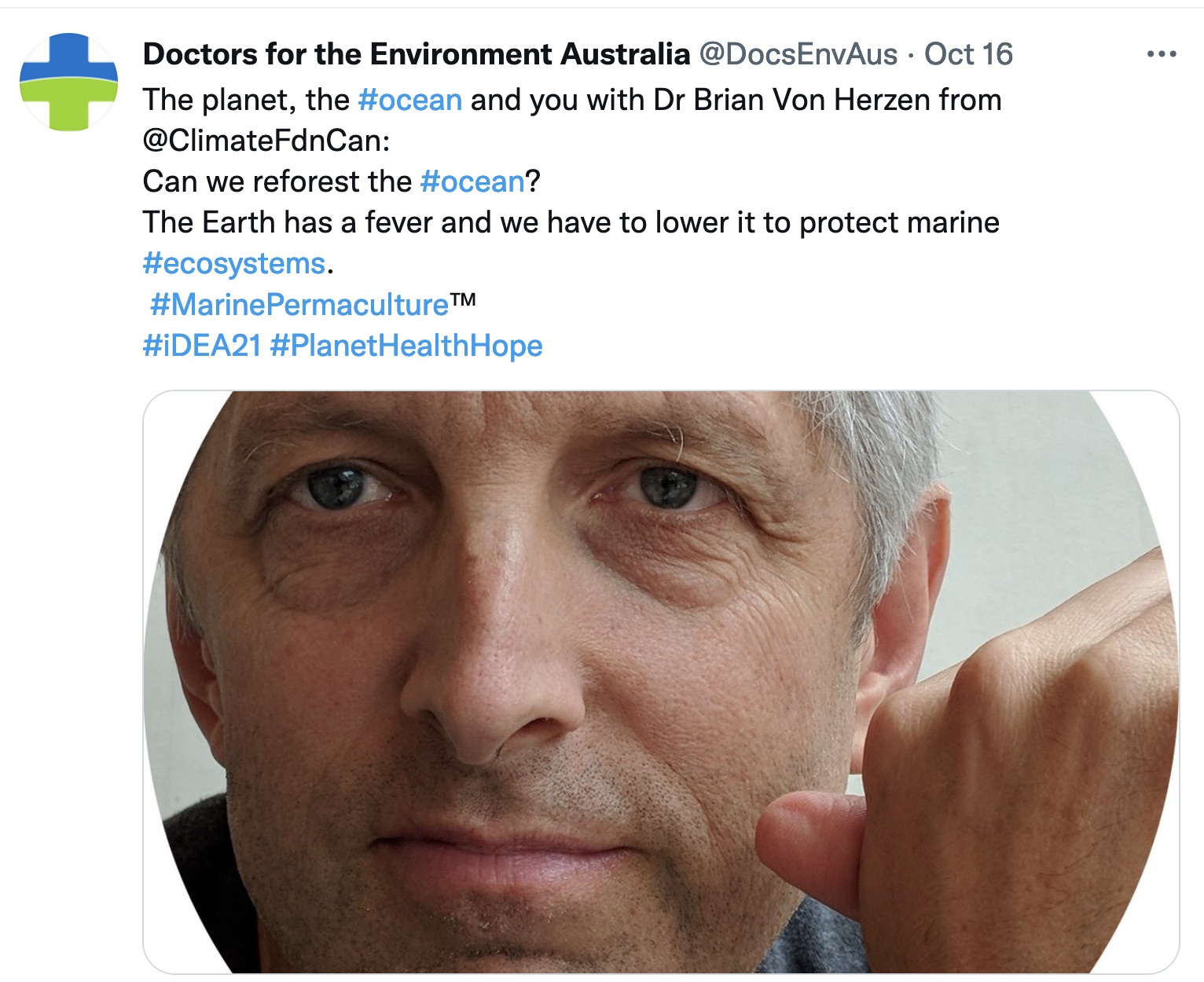 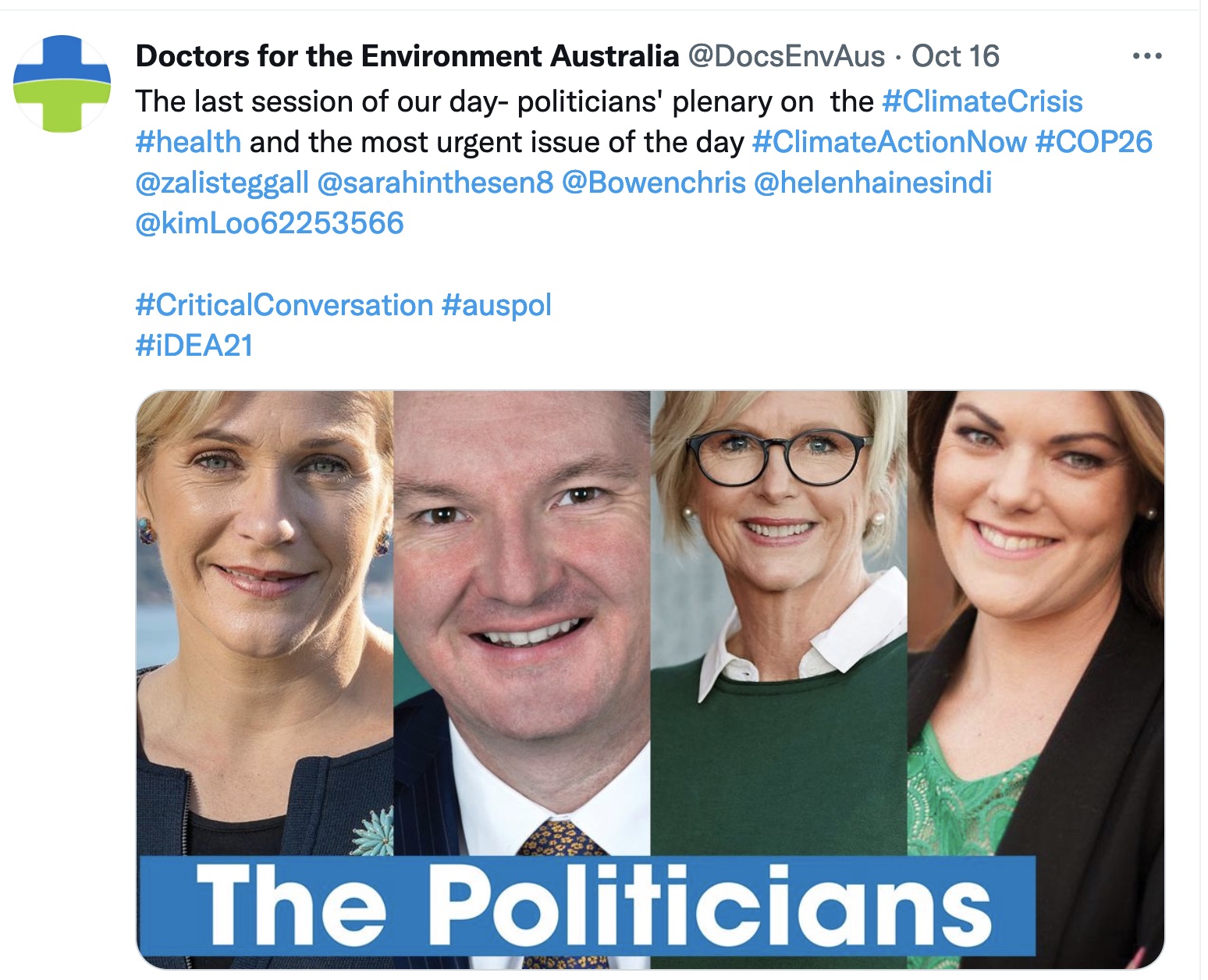 Hanson-Young: We have listened to the science for COVID, we need to do the same for the climate crisis. 2050 net zero is old news. We need a plan to reduce climate pollution THIS decade.

Steggall: Climate change is a health emergency. We need a plan now.

Haines: Rural and regional Australia are not laggards – and will gain the most from the boom in a #NetZero economy. 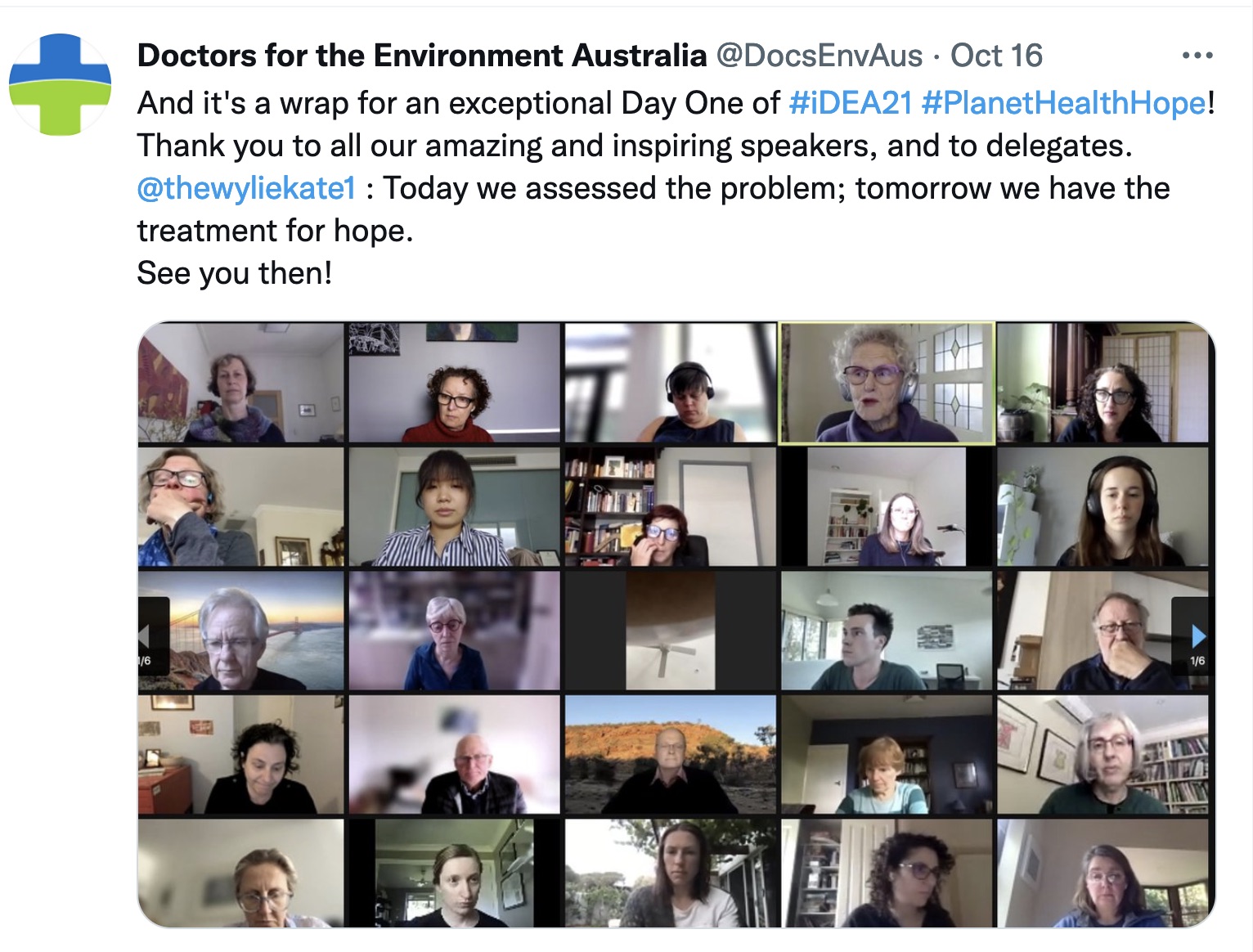 In a session on greening healthcare, Dr Ben Dunne details how sustainable healthcare can be ‘baked in’ to new hospital builds. Did you know that our healthcare systems accounts for seven percent of Australia’s carbon footprint, with hospitals accounting for 45 percent of these emissions?

Dr Ben Dunne – ‘As soon as you hear about a new hospital being built… get in touch with DEA, get in on the ground floor, and get to know your stakeholders’.

Next is Dr Kate Charlesworth, a public health physician, talking about how to develop a net-zero plan for your health service. She emphasises that more than 60 percent of the health system’s carbon footprint is in the supply chain.

It is critically important for an organisation to have a unified vision for a Net Zero target, with individual teams then developing interim targets and implementation plans

Dr Richard Yin (@RichardYin16) gave a masterclass in sustainable General Practice. Did you know only two percent of the Australian healthcare budget is spent on prevention? Prevention of ill-health prevents carbon-intensive hospital care, too!

In primary care most of our emissions come from medicines and chemicals. Aerosol inhalers can have 20-30 times the carbon footprint of dry-powder inhalers!

The cobenefits of acting on climate for healthcare clear. Encouraging patients to take on #MeatFreeMonday, active transport, or eating locally is great for the planet and great for patients!

A lot of interest in what sort of inhalers are best for the climate, and what is best for patients. Dry Powder Inhalers (‘click-clack’ inhalers) might not be for everyone, however other nations (like Sweden) have moved away from Metered Dose Inhalers (aerosol-type).

Dr Eugenie Kayak shares her new read – Hippocrasy by Dr Rachelle Buchbinder and Dr Ian Harris. Are doctors failing in their Hippocratic commitment ‘primum non nocere’ (First, do no harm) by not working in a sustainable healthcare sector?

The Lentil Intervention team – @ben_eitel and @EmmaStrutt_- presented on a planetary diet.

The Australian diet is extremely carbon intensive, with the vast majority from the type of food rather than the transport (only 8.4%) of the food itself!

Cattle gazing, and feedstock for land mammals, are leading causes of tropical deforestation

Every three minutes in Australia alone, an area of forest the size of the MCG is cleared in Australia, over 50 percent of which occurs in Queensland – which threatens the Great Barrier Reef, and terrestrial biodiversity.

There are multiple pressures on our environment from land-based food systems – including nitrate run off, antibiotic use (and subsequent antimicrobial resistance), and anoxic (no oxygen zones) in our oceans. –> Transitioning to a planetary diet is imperative for the planet.

We also need to halve our food waste – Australia’s food waste emits as much as Hazelwood (our dirtiest power station) does!

Taking a solutions-focus, Richard Denniss from The Australia Institute said public policy is complex at the best of times, and climate change is a special case as there are a relatively small number of highly profitable fossil fuel companies.

The fossil fuel industry is currently playing end-game politics. “If you own a coal mine that’s making $1mn a day, you know that eventually the coal will run out, but you will want to drag it out as long as possible.”

Environmental engineer Laura Trotta (@iamlauratrotta) spoke on engineering solutions: “I am quite positive about the future of our planet – when I started 25 years ago, we were few and far between.”

Buckle up, we’re asking: What’s the problem we’re solving? How is it being solved?

The decarbonisation of the electricity grid will decarbonise other parts of the economy – like transport, manufacturing (and healthcare!) In the last 20 years Australia’s grid has gone from less than five percent renewables to about 25 percent.

In renewables – wind is king at the moment. It’s inexhaustible, and enables land owners to co-generate profits from cropping/ farming and electricity generation. Important to remember that the environmental concerns with wind are far out-weighed by replaced coal generation!

Solar is an upstart in the Australian setting.

“When my 12-year-old was born solar was barely present in the Australian grid! It’s now the fastest growing contributor’. Challenges: the sun doesn’t shine at night Solutions: grid-scale batteries.”

Adopting solar in Australia is a no-brainer given our abundant solar resource. The challenges with batteries are similar to those of industrial power generation, and can switch on an off in a fraction of a second to support the grid.

There is a lot of excitement about hydrogen as it enables us to transport clean energy (for example, from Australia) to where its needed (for example, Japan) It is a relatively new technology, but holds much promise.

In a session on legal solutions, the conference heard from lawyer Charlotte Turner that there are heightened expectations of company directors with regard to climate-related disclosures. In New Zealand and the UK, forward-looking climate risks estimates are considered base expectations

Also, there are significant opportunities in the financing of projects. Favourable rates are offered for climate-risk aware borrowers. The operator the Royal Adelaide Hospital secured the largest green loan for a healthcare facility in the world just this year.

Some lenders even offer bonus favourable rates for mitigation of climate risk, and penalties if they aren’t met; these products have become very popular in Australia.

The Chancery Lane Project has a wide array of sample clauses, freely available and very rigorously reviewed, for organisations to use to green their supply chains and manage Scope 2 & 3 emissions.

Lawyer David Barnden discussed some of the legal cases now underway and opportunities for litigation.

“The iDEA conference this year was quite inspirational and a successful challenge for Zoom. It was a multidisciplinary affair.

Day 1 updated the science of climate change and assessed Australia’s problems in achieving effective action on climate change, including physical and mental health issues, the environment, biodiversity, the political response and the economy.

While DEA agreed that members as doctors have the expertise in the health effects of climate change, we need to understand the actions being taken by a range of professions and the blocks to these.

Day 2 focussed on solutions, from awareness of successes abroad, such as by the NHS, UK and European governments, Global Green and Health Hospitals globally and tried and tested economic, environmental engineering and legal responses.

It is exciting to know how efforts on limiting and controlling the multiple effects of climate change have been escalating, but in Australia, where our Government supported by the fossil fuel industry block policy and strategy for effective climate mitigation and adaptation, we do have a long way to go.  The conference was both optimistic and pessimistic for our future.

Dr Felicity Rea, another DEA member, also agreed that the conference was a “rollercoaster ride”.

She told Croakey: “From doom and gloom and frustration at the wanton inaction of our government and the blatant self interest of fossil fuel corporations to the multiple inspiring projects and solutions presented.

Frightening to hear of the plans for the Murray Darling…great talk by Katie McBride.

Laura Trotta’s environmental engineering solutions interesting but I can’t be quite as optimistic as she is! Her podcast seems great. David Barnden is inspiring with his legal firm fighting for climate action, although I still wonder how it’s all funded.

Kelp and its place in carbon sequestration fascinating, but an edge of caution needed before diving into yet another marine aquaculture industry without looking at all the impacts.

So much to think about, digest, get involved with.”