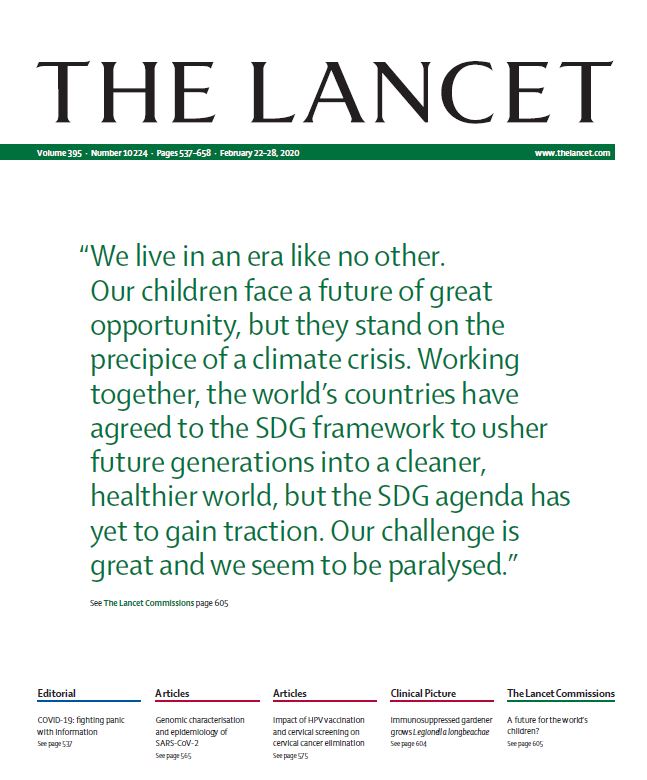 So begins an ambitious, unflinching new appraisal of prospects for the world’s children, laying out a roadmap for progress which puts climate action and tackling the commercial determinants of health at its heart.

The WHO-UNICEF-Lancet Commission, A Future for the World’s Children, was published last week in The Lancet, and examines the performance of countries across the metrics of sustainability, carbon emissions and child flourishing (encompassing markers such as education, nutrition and health).

The index shows, quite starkly, that countries ranking most highly on child wellbeing (Norway is 1, Australia is 20) are also some of those with the poorest record on emissions and sustainability (Australia ranks an abysmal 174/180).

“The poorest countries have a long way to go towards supporting their children’s ability to live healthy lives, but wealthier countries threaten the future of all children through carbon pollution, on course to cause runaway climate change and environmental disaster,” the authors write.

“Not a single country performed well on all three measures of child flourishing, sustainability, and equity.” 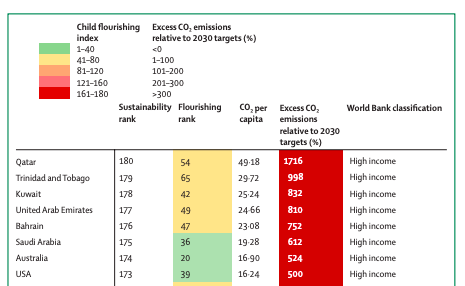 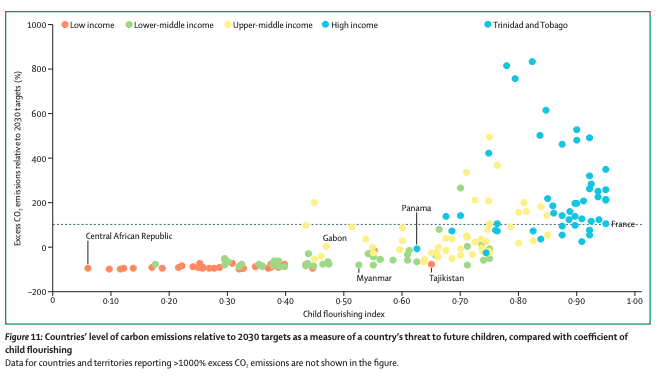 Ex-UNDP chief and former prime minister of New Zealand, Helen Clark, is lead author of the paper, which offers an authoritative and comprehensive overview of the challenges facing future generations, of which none is considered more urgent or essential than the climate crisis:

Over the past 50 years we have seen dramatic improvements in survival, education, and nutrition for children worldwide. Economic development, concerted international action, and political commitment have brought about rapid change. In many ways, now is the best time for children to be alive, but economic inequalities mean benefits are not shared by all, and all children face an uncertain future.

Children have little voice in the shape of their future. Decisions that will affect their lives are taken by parents, local leaders, governments, and global economic decision makers, and by the captains of global corporations with enormous resources and purely commercial interests.

Environmental harm to children now and in the future is intimately linked to our economic structures and commercial activity.”

The authors describe as “profound and imminent” threats to global health as a result of disruptions to planetary health, with more than two billion people including half the world’s poorest populations living in regions gripped by political fragility and conflict that is increasingly linked to climate change. Some 40 million people were displaced in 2018 by conflict, natural disasters and climate change, and these numbers will continue to increase “even under best-case scenarios”, the authors write.

Children are also the most vulnerable to the lifelong environmental effects caused by climate change arising from anthropogenic greenhouse gas emissions, and from industry-linked pollution of the air, water, and land …

This would have devastating health consequences due to disruption of water and ecosystems, rising ocean levels, inundation of coastal cities and small island nations, increased mortality from heatwaves, proliferation of vector-borne disease, and a crisis of malnutrition because of disruption to food production systems.” 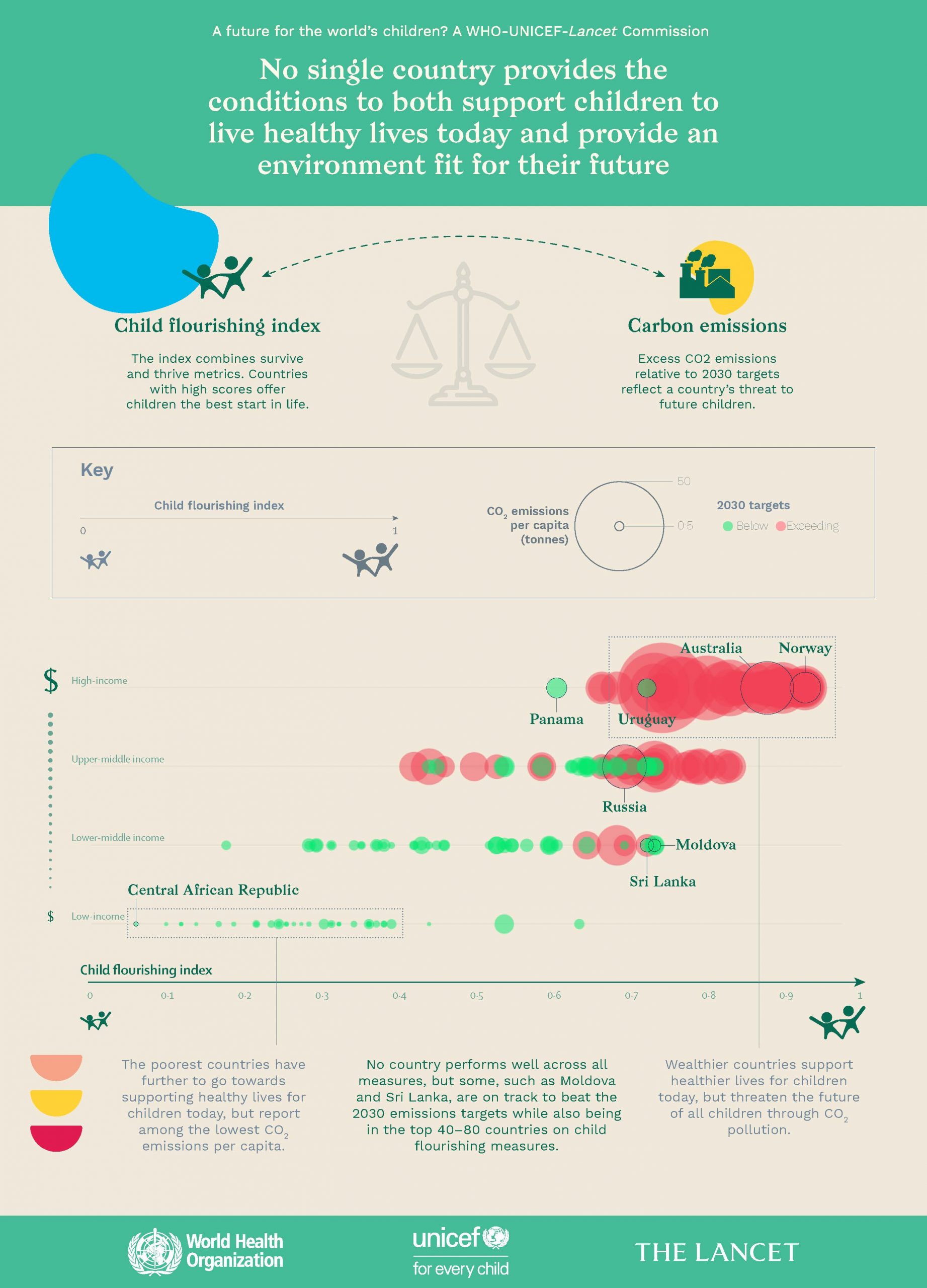 They call for a “new global movement to place children at the centre of the sustainable development goals”, with global commitment to the Convention on the Rights of the Child “showing the power of children to unite us for the common good.”

“Working to improve children’s health and wellbeing can motivate all of us to save our planet for them, and for ourselves,” they write.

“The effort required is enormous, but if we cannot deliver for our children, what is the measure of our civilisation?” 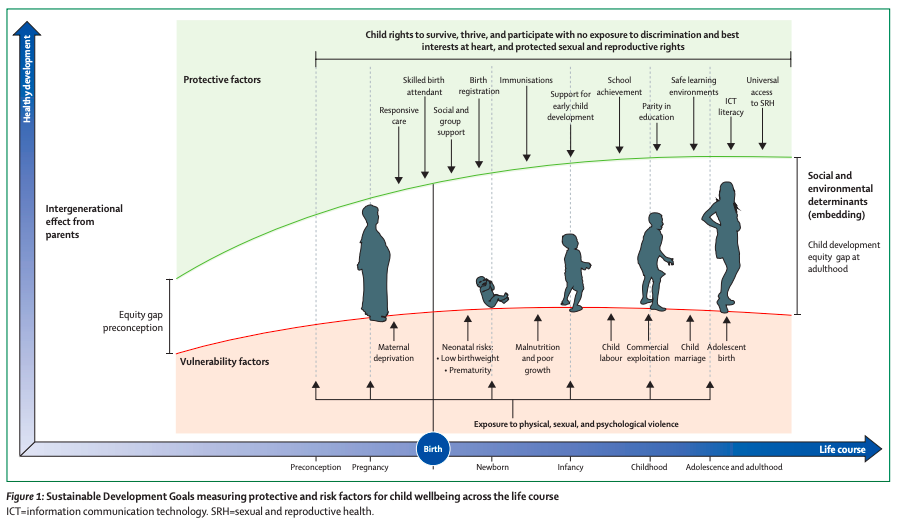 As well as the threat of climate change, the paper calls for bold new action on the related hazard untrammeled capitalism poses to the health and wellbeing of children, with commercial entities preying on and exploiting their “developmental vulnerability” to market products that cause harm.

“Companies make huge profits from marketing products directly to children and promoting addictive or unhealthy commodities, including fast foods, sugar-sweetened beverages, alcohol, and tobacco, all of which are major causes of non-communicable diseases,” the authors write.

Quantifying the challenge, the authors said that children:

The paper calls for an optional protocol to the Convention on the Rights of the Child — the world’s most ratified human rights treaty — to address commercial marketing and targeting of children. This would require national governments to:

“The commercial threats to children’s health are dangerously underappreciated, and we propose strong, specific actions for global and national actors to protect children from rapacious, unregulated commercial practices,” the authors write.

Although awed by the scale of our task, this Commission is also optimistic about our chances to change our world for the better, for and with children.

It will require bold politicians, courageous community leaders, and international agencies that are willing to radically change the way they work. No excuses, and no time to lose.” 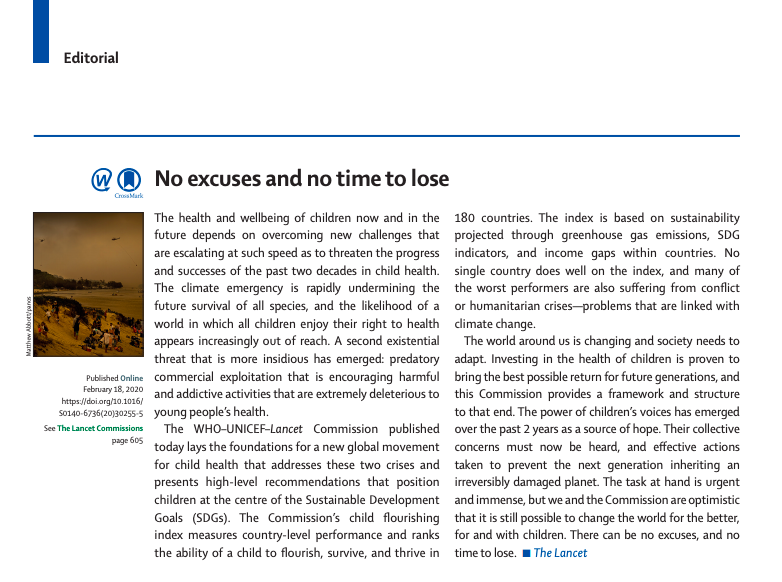 We’ve clipped some of the #FutureChild tweets below: 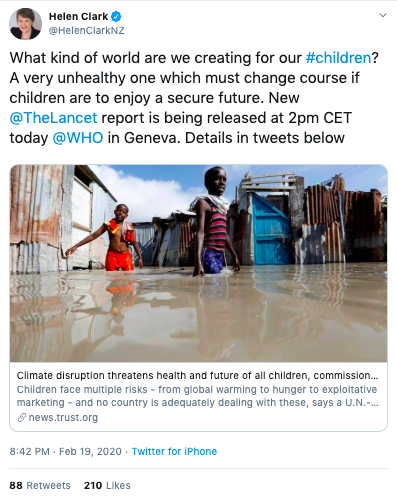 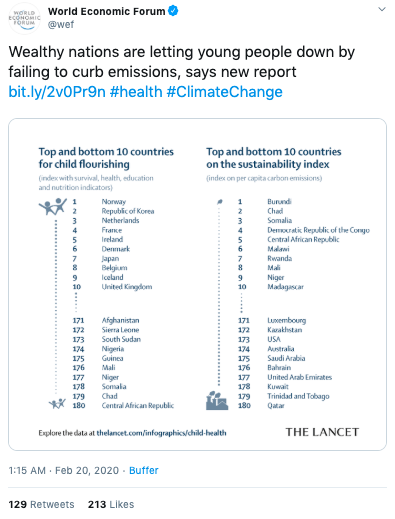 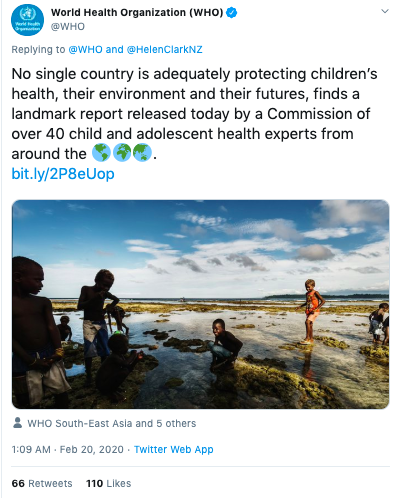 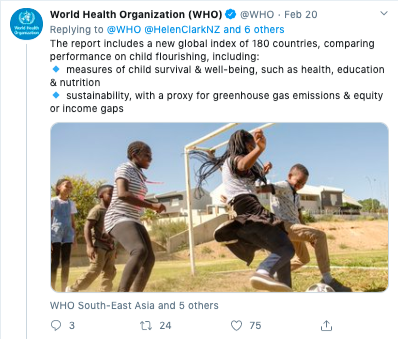 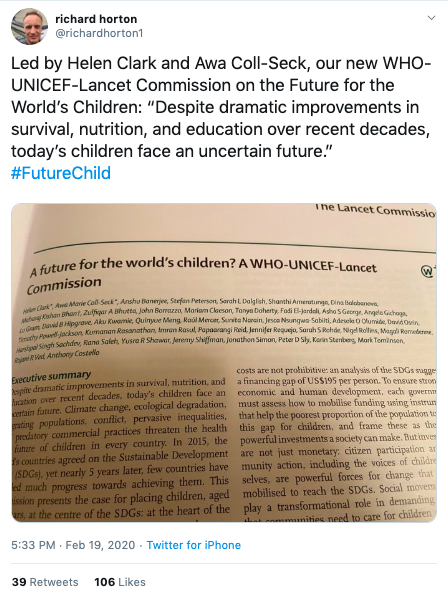 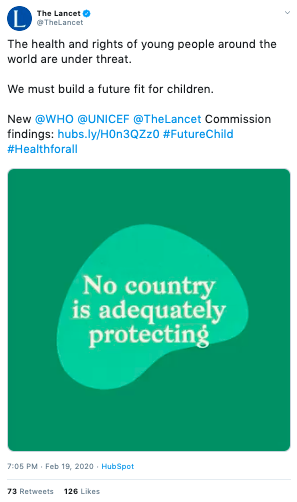 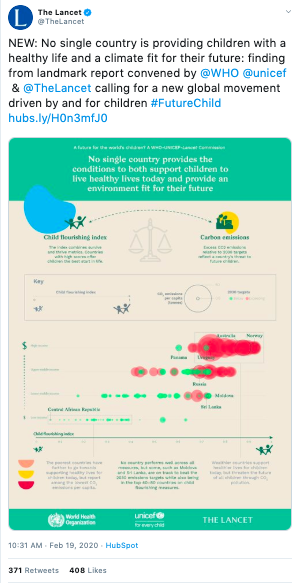 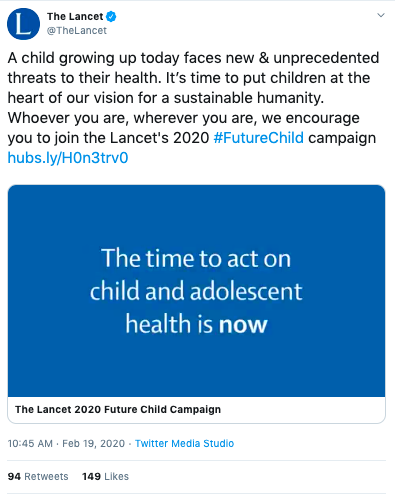 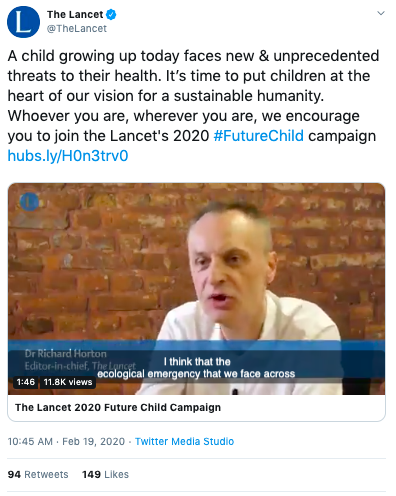 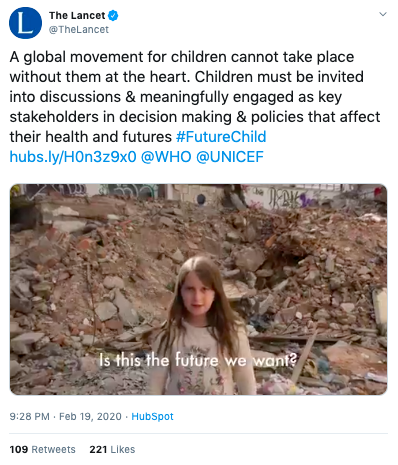 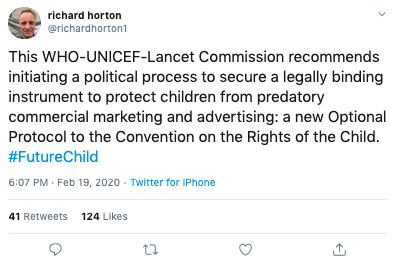 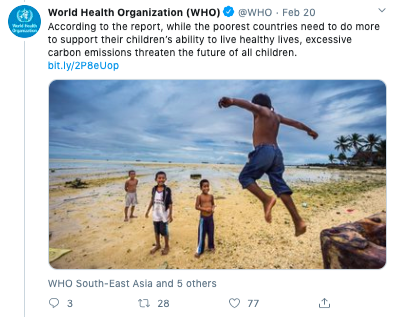 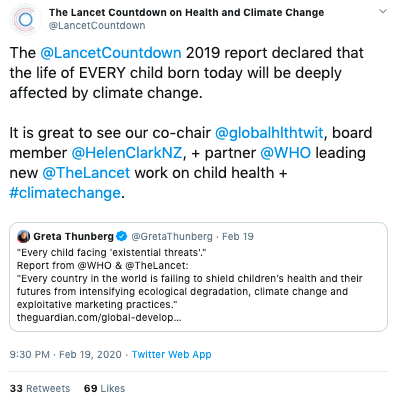 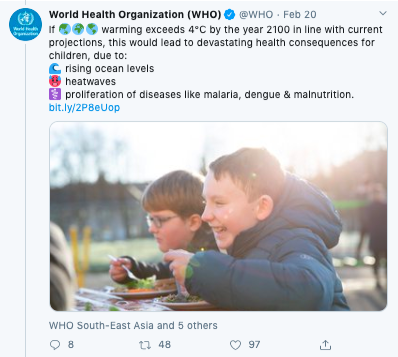 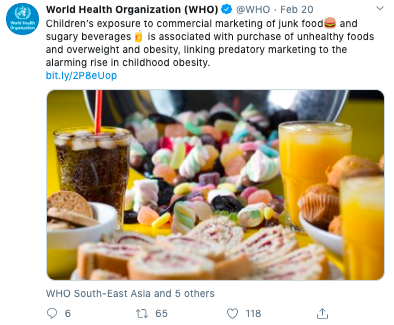 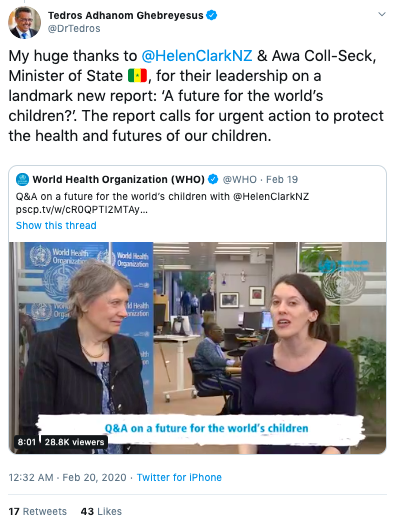